Last night around 7 pm, I went over to Eric and Shaena’s RV to paint rocks.  They have a dead tree out front of their site and Shaena had decorated it with junk found on the ground in the area.  She likes to paint rocks, so they invited me over, and that’s what we did.

Here are the painted rocks.

Theirs says Fillmore with a fancy “F” and the date.  The Fillmore design has meaning to the two of them.  Mine has our names on it and the year in the rays of the sun.  The “50” represents fifty years of marriage.

We let them dry overnight with plans to place them under the tree in the morning before we both leave.

This morning around 7 am, Yuma and I took a walk down one of the old asphalt roads left from the Camp Young years of the early 1940s.  Overgrown and broken now, but still visible. 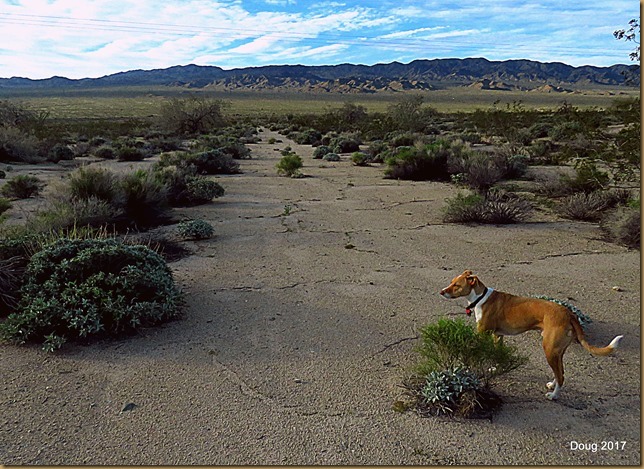 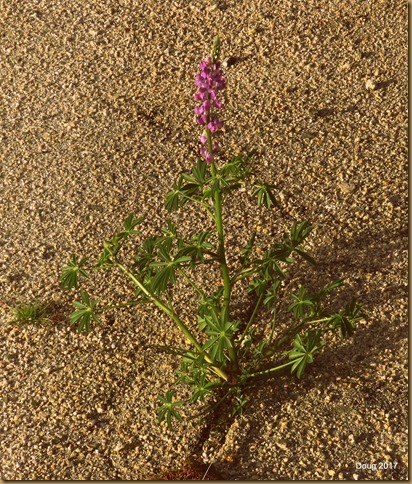 We looked for tortoises, but didn’t see any.  Maybe too early for them. Looking back at the two MHs.  Close enough to run an extension cord to their generator to pump my tire up before leaving.  As you can see, it is going to be another beautiful day! 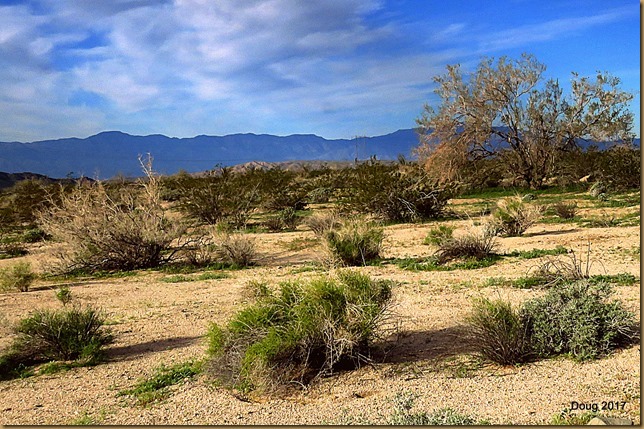 After breakfast, we all took a walk down the hillside looking for Faith and Matt.   Shaena wanted to say goodbye to them, but we had no luck this morning. 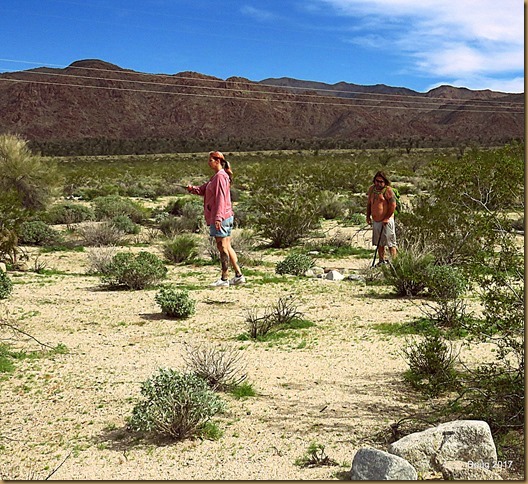 Yuma and Punk did their hardest to sniff them out, but still no luck. 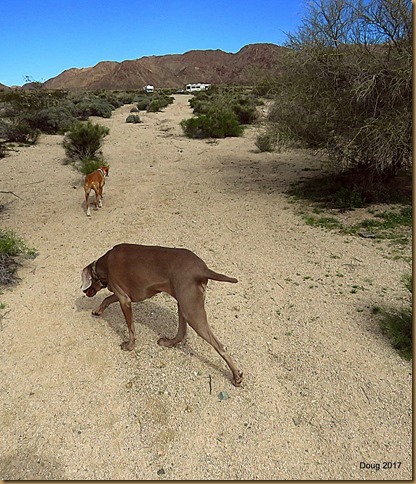 We had dawdled enough.  It was getting close to noon and we had to be on our way, so we placed our painted rocks under the tree and moved on. 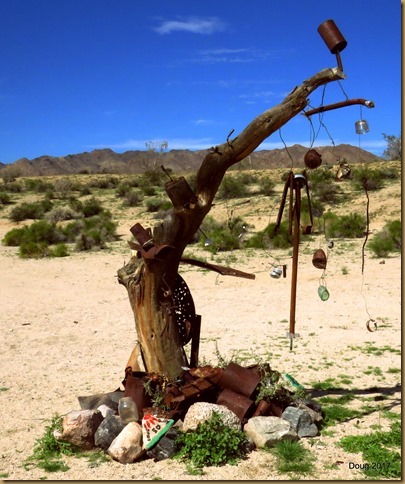 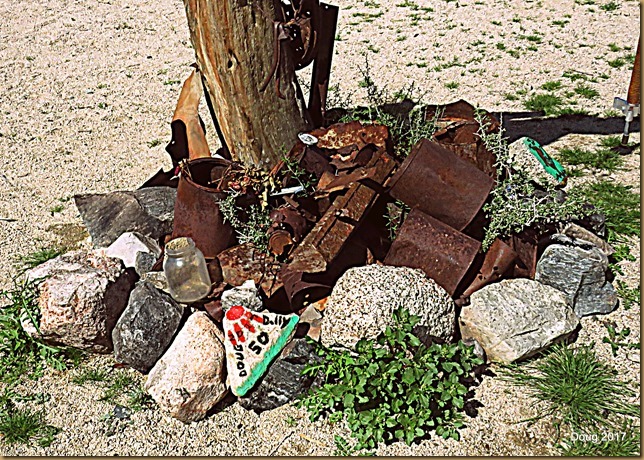 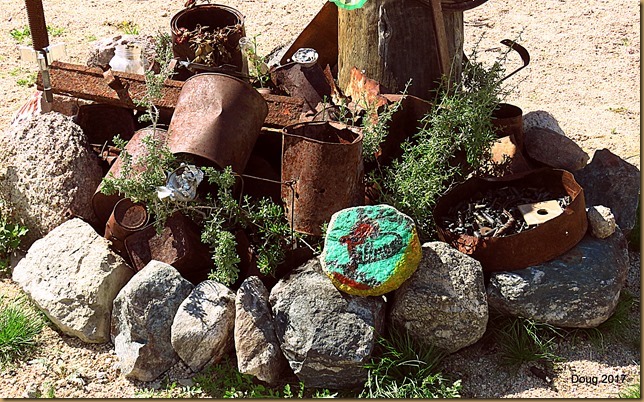 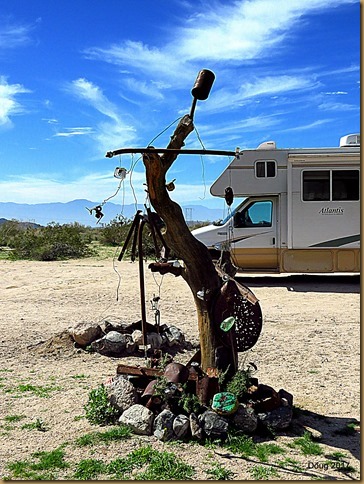 It was 12:30 by the time we left the site.  They are headed West to Indio to stock up on food and then head on down to Borrego Springs.  They were looking for a new boondocking place and I told them this would be perfect for their adventurous spirits.  I turned East, heading for Blythe, California to get my tire fixed and stock up on supplies for my next boondocking experience.

Before parting, we became Facebook friends, so we would not lose track of one another.  I wish them luck!

I pulled over on the Interstate to get this photo of the pipes for the Colorado River Aqueduct.  Must have been something to dig that tunnel through those mountains. 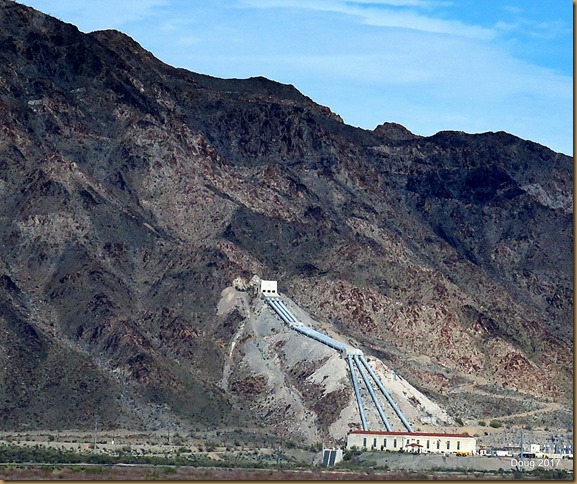 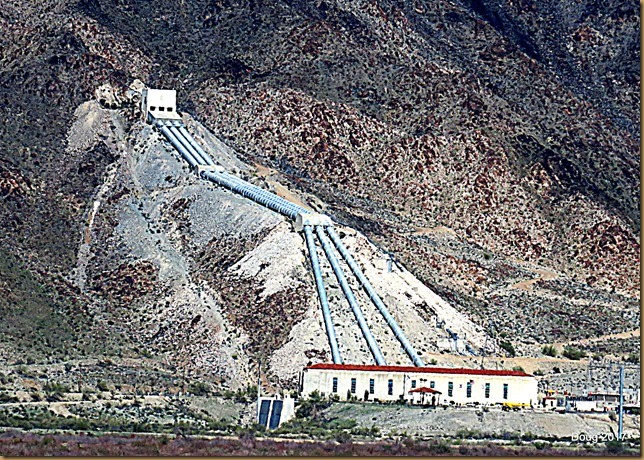 I stopped at Desert Center, about 25 miles down I-10 to take some photos and let Yuma run around.  This little place is almost deserted.  The only place still active was the Post Office. 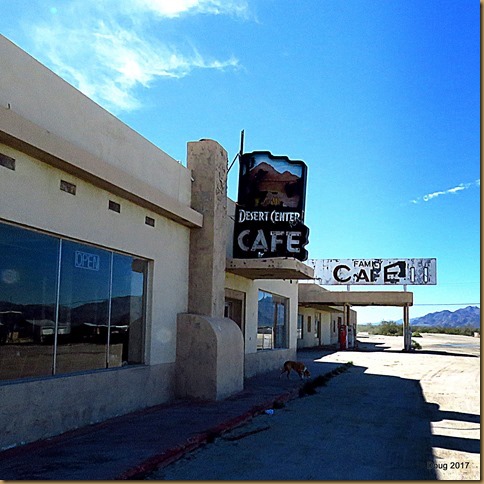 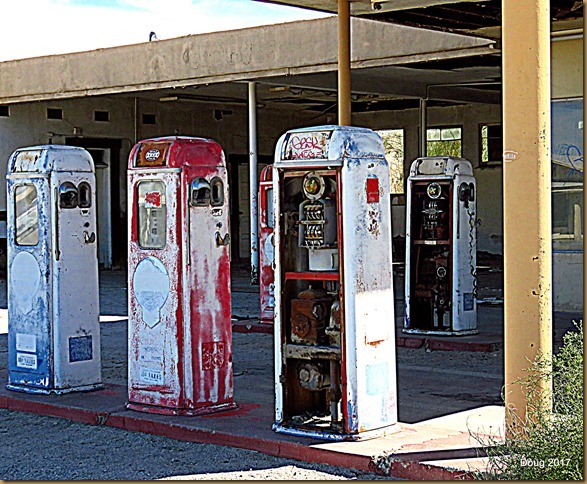 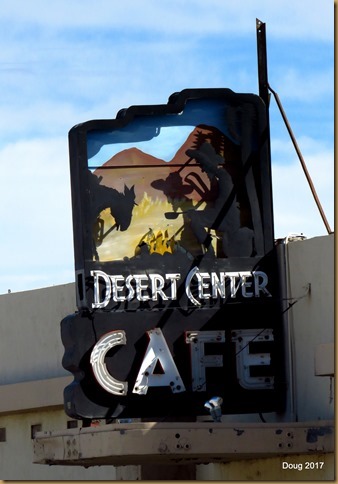 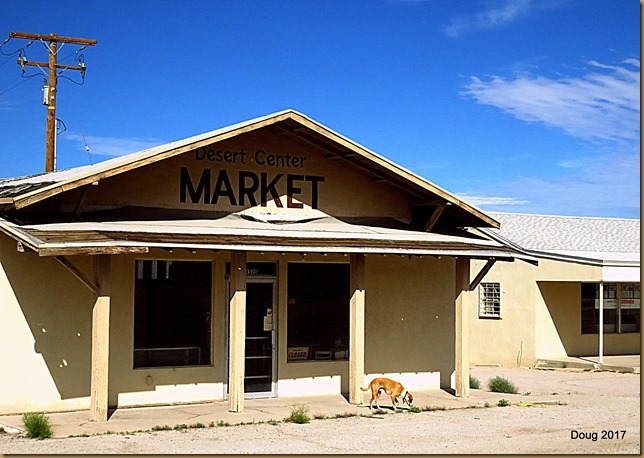 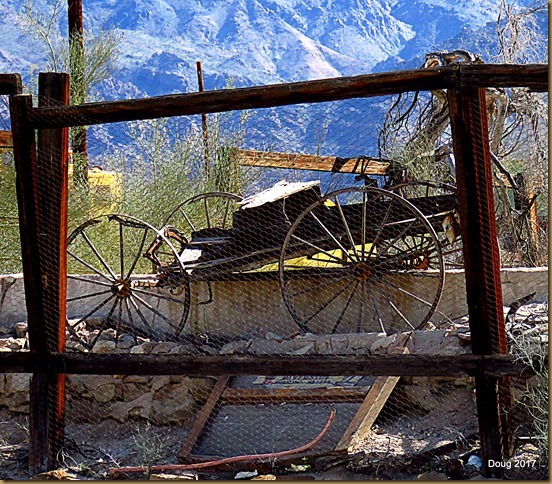 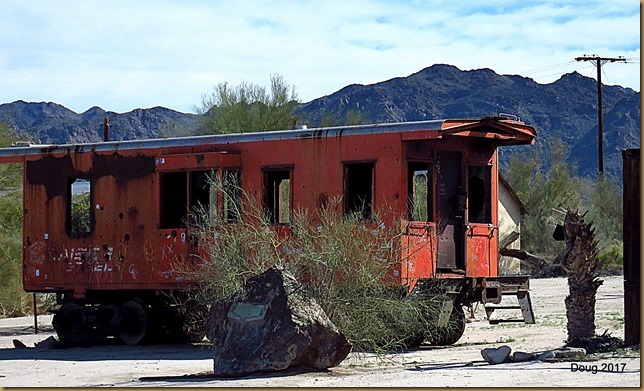 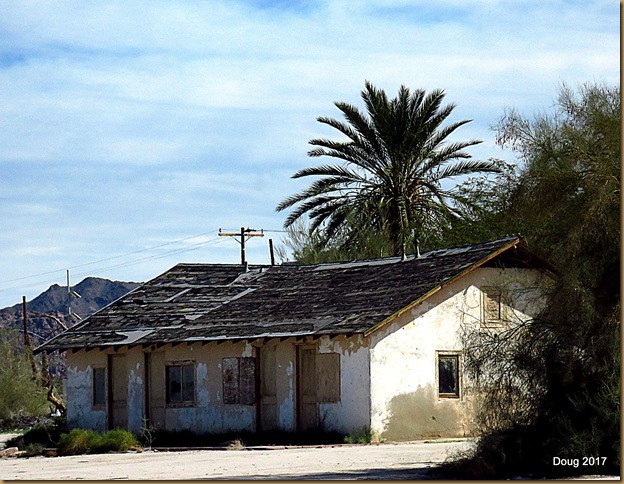 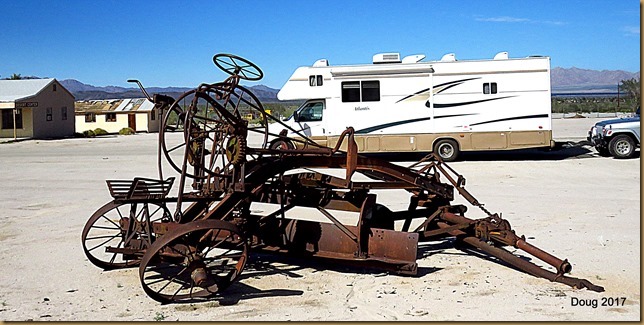 We only had to go 70 miles today, so wasn’t in any hurry.  The interstate was smooth and a joy to drive on.  Even Yuma liked riding with no bumps. 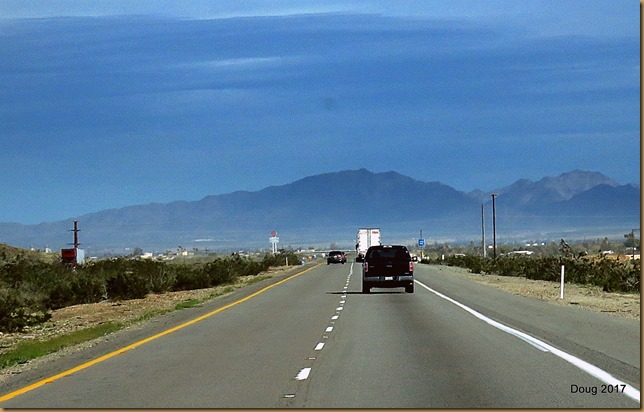 Made it to Blythe, in the early afternoon and as I was driving up the main drag, I spotted a Good Year Tire repair shop and pulled in.  Met the nicest guy.  He had me pull right in and started right away, pulling the two tires off the driver’s side.

He placed the tire in a vat of water and the sizzling started.  I had a rusted spot in the extension hose for the valve stem.  He didn’t have a new one available, so we put the tire back on without the extension and bolted everything up and we were done.  Didn’t take a half hour.  What a lucky duck I was. 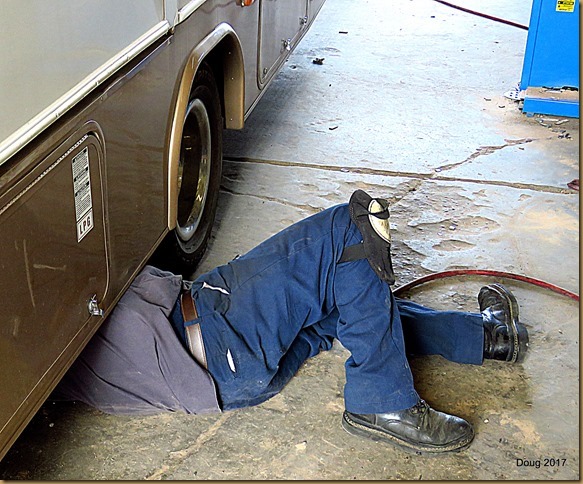 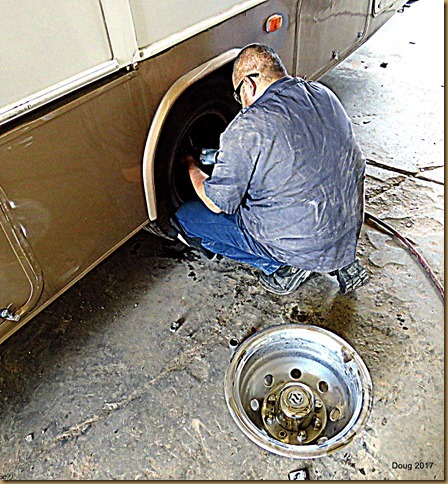 He took me inside to settle the bill.  I slipped him a ten spot and thanked him.  Then I got a surprise.  When he told the boss man the work he had done, the boss man said there would be no charge.  Can’t get any better than that!

I then headed to the Albertsons Neighborhood Food store and parked for the night in the lot next door.   The stores for that lot were closed down and empty. 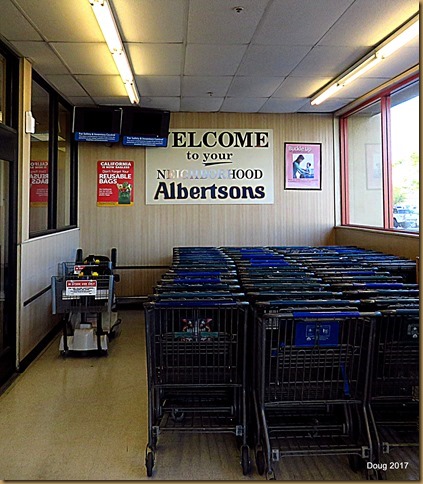 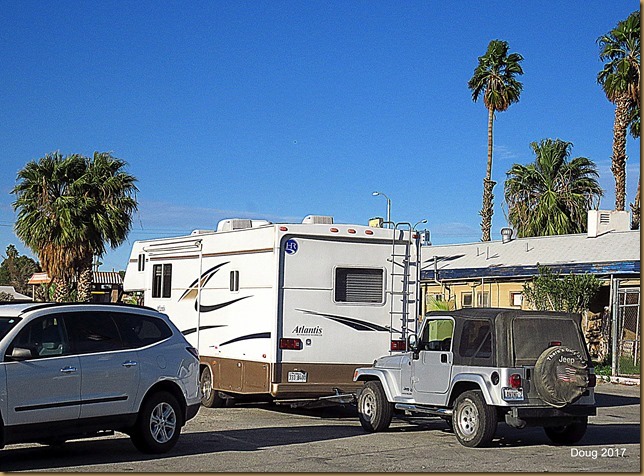 Do a little shopping and then call it a day.  Turned out to be another great day in the Southwest!