Just another beautiful day!  Clear skies and a high of 75 again. 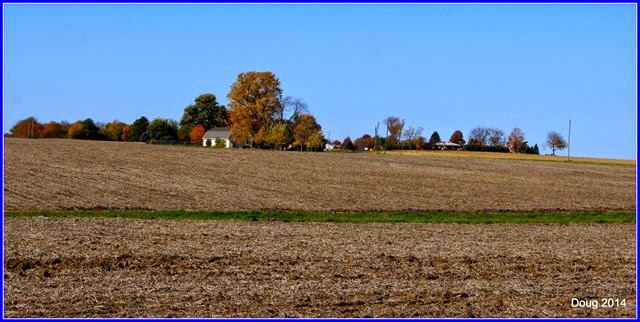 Received a call at 7 a.m. from my son, Steve.  He had to go to work and wanted me to go over to my daughter’s house to let their bulldog, Bobby out because his family had gone away for the weekend.  Forgot to take a photo of Bobby, but did get one of the lake behind their house.

Decided to tackle the front walkway this morning.

Made short work of that and took out to the burn pile.

Couldn’t resist taking a photo of our house through the Weeping Willow tree.  No leaves falling off of it yet. 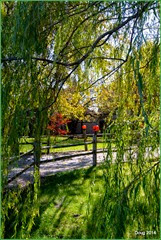 Fergie and I went for a walk up the road and back during the afternoon.  She is running hard to catch up with me.  You can see the wind turbine farm at the top of the road.

Wasn’t till evening before I got around to starting the fire.  That is a quarter moon at the top.

Settled in for the evening, beat Dolly in a game of 500 Gin Rummy and we’re watching the Giants beating the Royals.  Last night’s game didn’t go well for the Royals.  I think they decided they won in the 6th when they were ahead 4-1 and stopped being aggressive.  Ended up losing 4-11.

Only have a month before I head out on my long journey to the Southwest.