I scream, you scream

I could hear the wind this morning when I woke and that is never good.  Looked outside and it was cloudy.  Looked at the temperature and it was 53 degrees and that was good.  At least it is not chilly to the bone out there.  Going to get up to 67 degrees this afternoon.  Can't beat that.

Got up and had another slow breakfast and read blogs and wrote my comments.  I thought about going into town and getting a haircut, but when I stepped outside, the sun was popping out and the skies were now a puffy white and blue.  Still a breeze, but not bad.  Decided to skip the haircut.  What's another month?

Yuma and I decided this would be a perfect afternoon to take a little drive and get some ice cream.  I have been a good little boy for over a year and with my great glucose readings lately, I decided it was time to splurge.

We headed North to Laguna Dam Road and took a left towards Imperial Dam Road.  I think I pass into California somewhere, but see no signs.  We passed a pretty little lake, 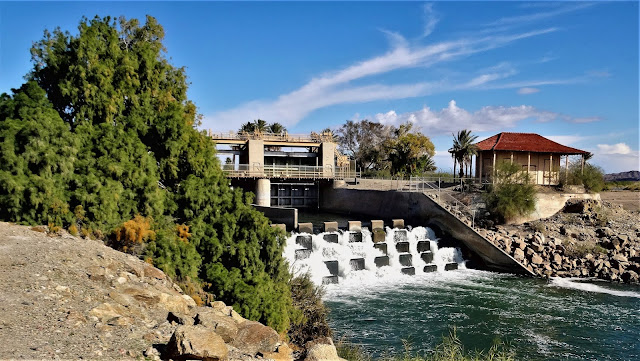 and then Imperial Dam. 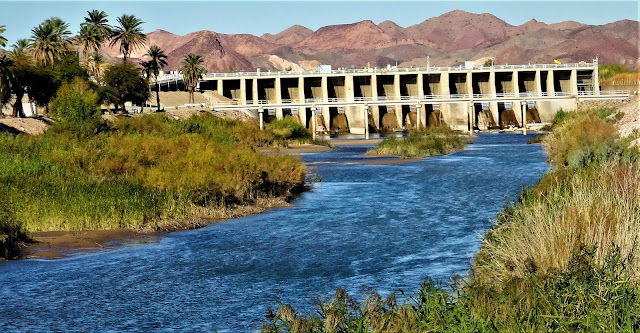 As we were rolling along beside the canal,

As I rounded the curve heading towards Bard, California we spotted our destination among the Date Palms.

There is our destination--Imperial Date Gardens. 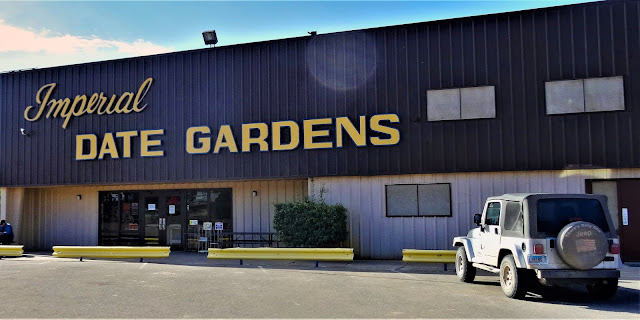 We coulda had a date shake, but thought that would be too messy for Yuma, so we decided we would have  ice cream.
We then drove just a little further up the road to Cloud Museum while we ate our ice cream.  I've taken the tour before, so we just looked at the stuff at the entrance. 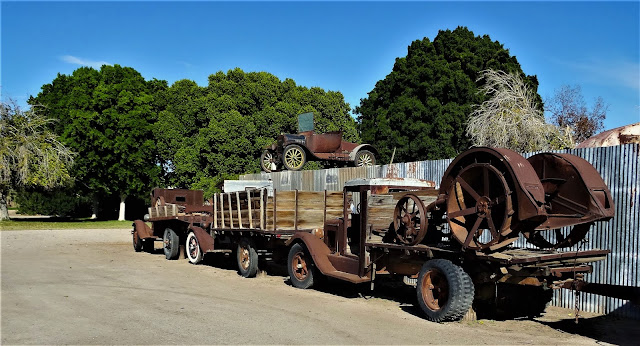 Then we headed home to wait for the last sunset of the year.

Happy New Year to family and friends!  Hope 2020 is another great year. 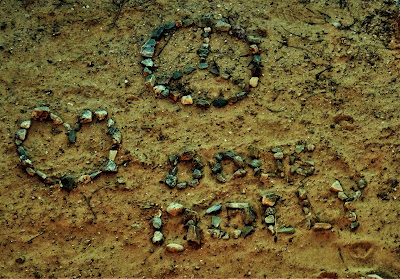 Email ThisBlogThis!Share to TwitterShare to FacebookShare to Pinterest
Labels: Yuma and I then decided this was a [erfect day

For some reason, I just didn't want to get out of bed this morning.  I could see from my window, it was cloudy out which is always disappointing.  I kinda knew when I saw the large mass of clouds coming in from the West last night.  Made for great sunset pictures but a lousy next day.  Fortunately, no rain.

By 10 o'clock I was making bacon and eggs for breakfast and starting my second cup of coffee.  I had stepped outside earlier and I knew immediately it was going to be an inside day.  Very chilly out there.

While doing nothing, I checked my list of grocery items and decided Yuma and I would kill some time today shopping.  My favorite pastime - NOT!

Left at 2 o'clock and returned after 4.  Decided to check out Fry's because I wasn't having any fun at Walmart.  It was also crowded, but I did find a few aisles to hide in and it wasn't the liquor aisle. 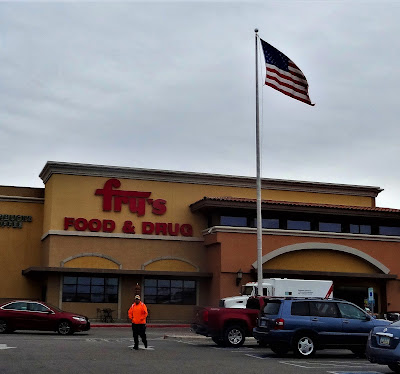 Found almost everything I needed and was surprised to find almost every checkout lane was open and no waiting in line.  I like that.  Stopped for gas and five gallons of water and we were done for the day.  Good to accomplish something on a cloudy and cold day.

Got home and put things away and started dinner.  Had steak and the rest of the French Style beans and pudding with lots of whip cream for dessert.  Turned on the TV but couldn't find anything after Wheel of Fortune, so turned it off.

That was our day.  Not even a sunset picture to close with tonight. 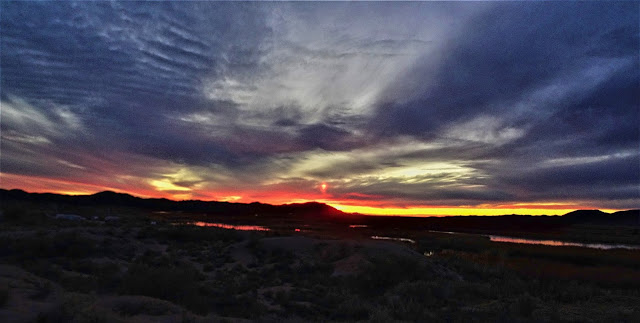 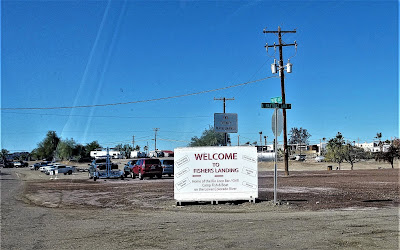 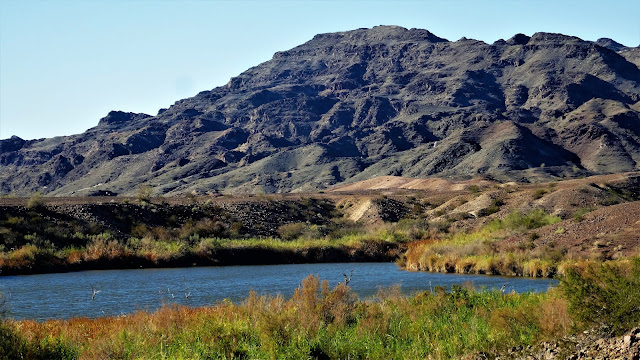 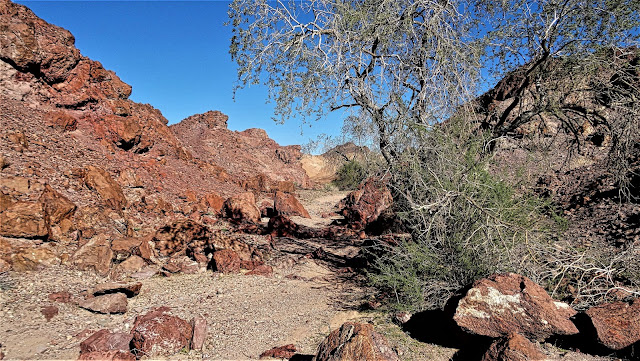 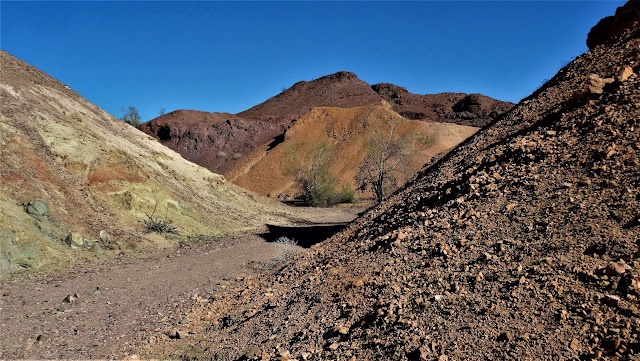 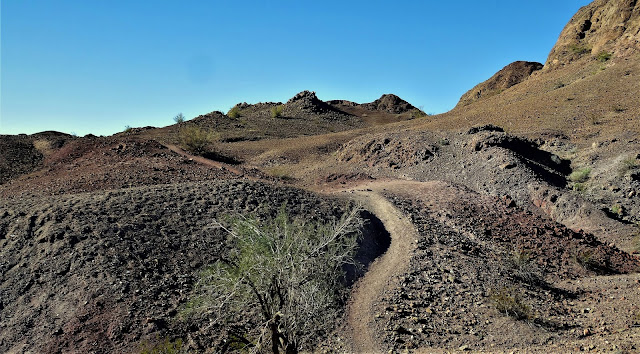 Palms in the Lake

Woke up to a partly cloudy morning and cool, but not bad.  Today, I don't have much planned so after our breakfast, Yuma and I decided to take a little drive toward the South entrance to the lake.

Before we left I took a few pictures of our new location from the road.
It was only about two miles to the boat dock area where it is the prettiest section of the lake. 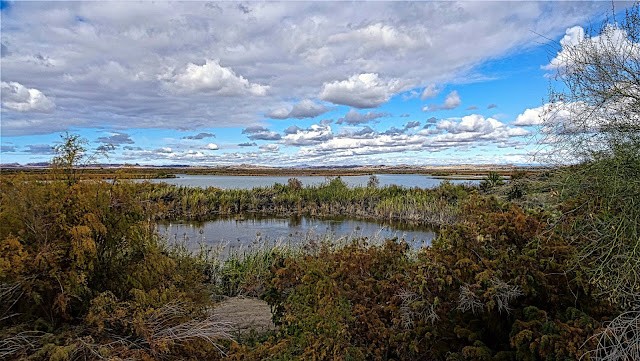 Most of the lake is surrounded by reeds with cut-outs for people to get to the lake.  Night time around here belongs to the mosquitos.

This particular area has small man-made peninsulas with full grown palm trees.  May be date trees because I don't know the difference.  There are a lot of date tree farms around this area. 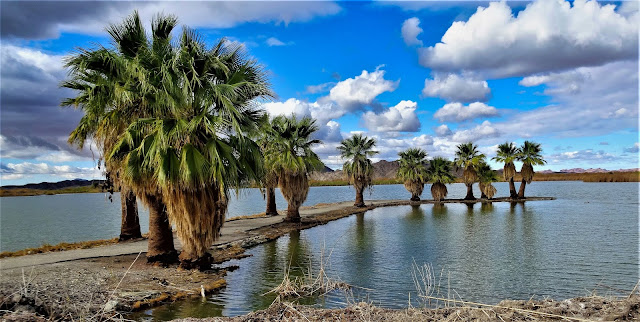 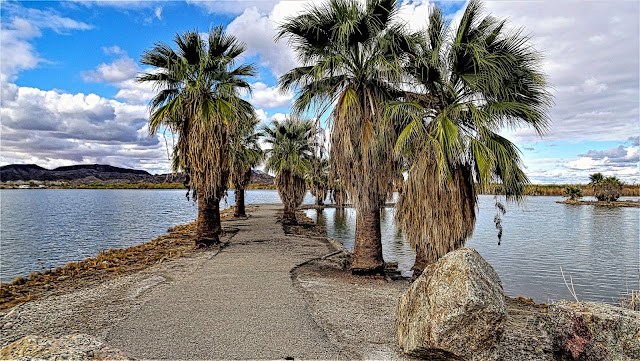 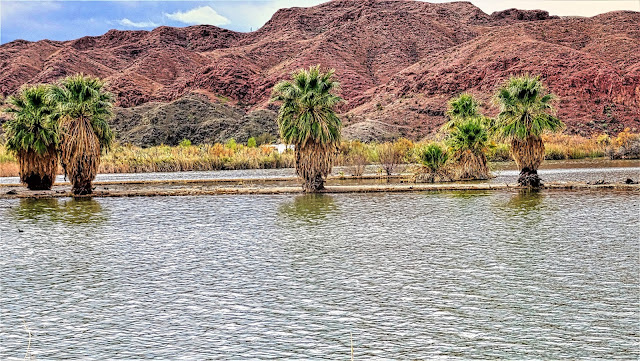 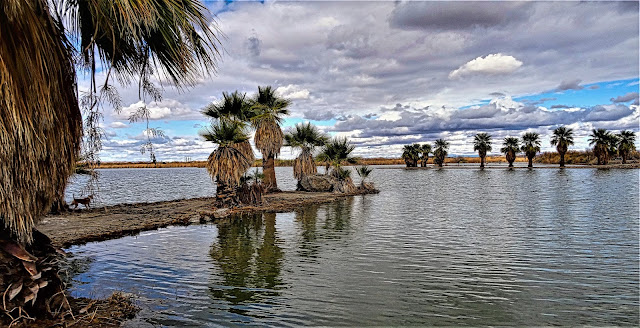 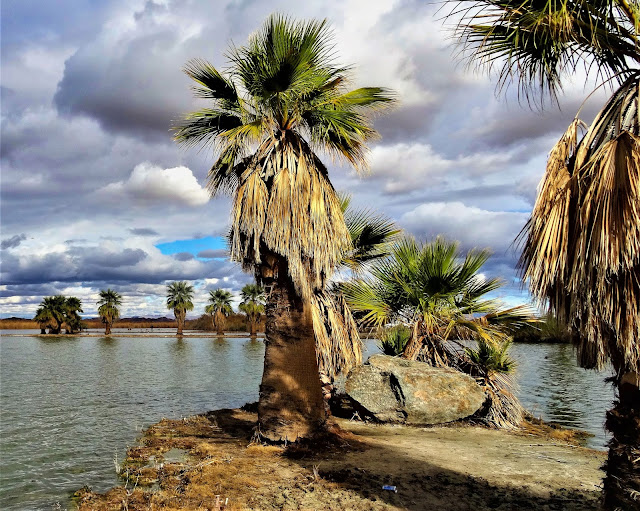 Just on the other side of the road they are building a nice RV parking area for visitors to use.  In fact, they are starting to use it now.  I first thought, how nice, then a bad thought entered my brain.  Wonder if this is the beginning of the end to parking along the lake in relative privacy.  Oh well!  We'll find out soon I believe.
It is almost time for Gold Rush so enough of this blogging for tonight.