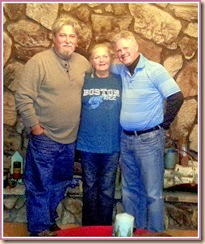 James came up from Murfreesboro, TN and Jesse and his wife, Jan came down from Troy, MI to spend a few days with us over the Thanksgiving holiday.

Nice to have Dolly’s family here.  First time they have all three been together since 1995, so it has been awhile.

Posted by Doug Laning at 9:54 AM No comments: 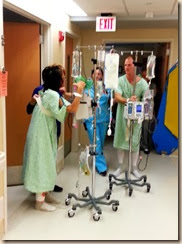 Both Tracie and Steve are still slowly recovering.  They are in adjoining rooms and take walks together.  Little slow going, but they need the walks to build their strength and to help keep their lungs clear.

Dolly and I visited for a short time because they both still tire easily.  All is going well and that is the most important thing.

Posted by Doug Laning at 7:46 PM No comments:

Today was a long time coming for Steve and Tracie.  This is the day that Steve gave the gift of life to his wife, Tracie.

They both went into surgery this morning and one of Steve’s kidneys was removed and placed into Tracie.  We waited for about four hours for Steve to be finished and moved to the recovery room and it was another two hours before Tracie was in recovery.

The surgeries went off without a hitch and both are now recovering.  Steve will be in the hospital for three days and Tracie will be there for up to ten days.  Tracie will no longer be tied to a dialysis machine anymore and that will be great.

Here is Steve happy to be out of surgery.

It will take six weeks before Steve can go back to work and it will take Tracie much longer before she will have this surgery behind her.

We all wish them both a full recovery.

Posted by Doug Laning at 8:29 AM No comments:

Woke up this morning and looked out the back door to a dusting of snow and the temperature at 19 degrees.  Wish we were heading South today instead of next month.  This will be a day to stay inside.

I have most of the orders but now have to wait till this weekend when it is warmer to start the wiring of the new battery set up.

Posted by Doug Laning at 8:33 AM No comments:

Evan came over this morning so we could do some battery bank planning.  We turned on the furnace to warm up the motorhome and it would not stay on.  So, we were side tracked immediately.

Evan pulled out the igniter unit and moved the two igniter prongs closer together and put it back in.  The heating unit looked brand new as if the furnace had never been used.  Since it is a southern Texas motorhome, probably didn’t get much use.

Started it up and it worked fine.  Hopefully, that was the problem.  Time will tell.  Now back to planning!

The current set up allows the AC power to only work when plugged into shore power or the generator is running.  When neither of these are used, all the 120 volt (AC) outlets and appliances such as the TV have no power.

The plan is to add a Whistler Pro 3,000W Power Inverter (converts DC current to AC) near the battery bay and to replace the two house batteries.  I purchased 5 Duracell® AGM Deep Cycle Marine and RV Battery - Group Size 31DTMAGM from Sam’s Club that will supply the inverter with 12 volt power.  Total cost of $985.  Five 12 volt batteries should give us approximately 520 amp hours when connected in parallel.  That equates to approximately 50 hours at 10 amps.  Not much but hopefully enough for our needs.

The plan is to run an output electric cord from the inverter to a 30 amp plug in receptacle and place it in the same bay as the converter next to the plug in for the converter.  To keep the converter and inverter from being used at the same time it will work this way:

I ordered the inverter today from Walmart.com and hopefully soon we will start wiring it up.  Total cost $245.

We have finished the above updates and things seem to be working well.  It is so cold out (6 degrees) that I have not had the opportunity to test the new boon docking set up in a real environment  Evan did an excellent job of putting all the parts together.

I hope to test the system before our venture starts at the end of the month, but may have to do it on the road.  My hope is to be able to spend a couple days without hook ups and have access to TV and heat along with keeping all our computer equipment plugged in and charged.

Posted by Doug Laning at 8:10 PM No comments:

Steve, Dolly, Fergie and I left around noon today heading for Indianapolis, Indiana in Steve’s car.  Tomorrow is the Indianapolis Monumental Marathon.  Steve is running the marathon, and Kristi and Nick are running the 5K run.  Kristi, Erin and Nick will join us at the Wingate Hotel on the west side of Indy later this evening.  They are coming later, after the kids get out of school.

On our way, we made a quick stop at Lowes in Champaign, IL so Steve can pick up a box of tiles.  He is having someone fix up his master bedroom bath with all new tile for the floors, walls and the bathroom walk-in shower and they didn’t have all he needed here in Bloomington.  Got that done and off to Indy.

A couple hour later and we were at the hotel.  Actually 3 hour because we lost an hour for time zone change.  There was a Sam’s Club right next door to the hotel which was great.  I have been wanting to get house batteries for the motor home and wanted to check out what kinds they had and how much.  As it turned out, they have Duracell golf cart batteries at a very reasonable price.  I may get those instead of the Advance batteries as mentioned in my previous post.  Evan and I are going to sit down next week and come up with a boondocking battery plan, so I won’t buy anything until we have a good plan put together.

We were all up and about by 6am getting ready to drive down town.  The race starts at 8am on the dot.  We found a great parking spot a couple of block from the start and we were off to the races.

Here is the race crew at the start line anxious to get started.

There were thousands of people at the start line but it was a lot of fun and excitement was in the air.  Steve was off without a hitch and we would not be seeing him for about 3 hours and 15 minutes.  He has done this marathon six or seven times so he has it down to a science.

Half hour later, Kristi and Nick were off for their 5K.  It would only be about a half hour for them so Dolly, Fergie and I headed off to the finish line which was only about a block away.

Kristi and Nick have a $5 bet on who comes in first.  We didn’t have to wait long before we saw Nick coming to the finish line and about two minutes later here comes Kristi dragging up the rear.

Here is everybody waiting for Steve to finish up.

Got a picture of Steve about a quarter mile from the finish line.

Everybody is happy with their medals.

After the race, we got out of town and headed up to Lebanon, Indiana to visit with my son Ben.  This town is about 20 miles north of Indy.  Ben is home alone today because his girlfriend, Margie’s daughter, Brie just had a baby the day before and was at the hospital.

Had a nice visit with Ben and dogs and cats and we made it home by 6pm.

It was a fun couple of days!

Posted by Doug Laning at 7:19 AM No comments: