Up at my normal time, 8:30.  Clear skies and it will be a much cooler day with highs only in the mid 60s.  I'll take that.  Took Yuma for a short walk and it was so nice out it took me hours to finish my breakfast.  Had no plans except to get milk.

My feet felt good after soaking them.  As I was resting outside I decided to clean the hummingbird feeder.  Haven't seen one since the first day and wouldn't you know it that little bugger came up and wanted me to put it back.  I guess it drinks from it when I'm not looking. 😁

As I was finishing breakfast, I decided I would drive to Why and see if they have milk.  Haven't been there yet.  It was 1:30 and Yuma and I jumped in the Jeep and headed out.  About a half mile down the road I saw this very nice big RV site and pulled in to check the Internet strength.  1-2 bars of 4G.  Much better than I'm used to getting.

Decided to hold off going to Why until I get moved in here.  Don't want someone else to take it.  Drove back to the White Lion and packed everything hastily and and slowly turned around to get out of my site.

It's tight but I'm sure I can make it.  Like a dummy, when I started thinking I was in trouble, instead of stopping and getting out to survey the situation, I bull headily forged on.  I think you're starting to see why I have the heading at the top. 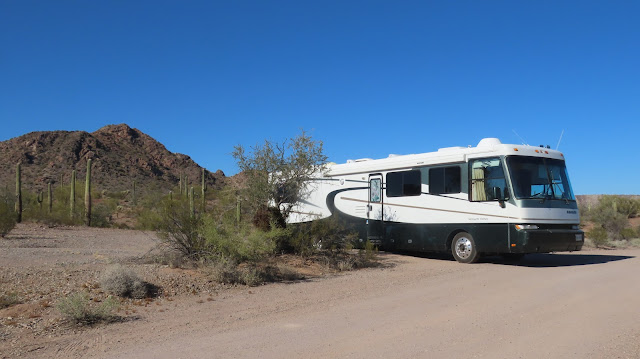 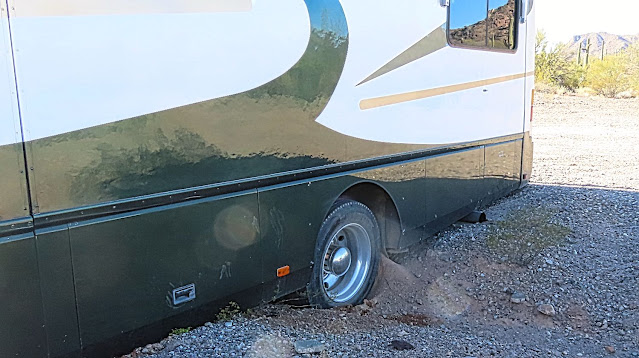 The front end made it, but the back end wasn't following the same track and I ended up bottoming the rear end out in a big ditch.  Now, I'm making no excuses.  It's 41 feet long and I know I should be careful, but do I listen?  H--- NO!

I got out finally and surveyed the situation and it was bad.  No traction to the back tires and this thing weighs 15 TONS!  Poor Yuma was scared because I was cussing so much and going through a massive amount of self-pity.  Why me!  Why me!  Because I'm stupid, that's why!

Luckily, I was only taking up half of Darby Well Road, so what little traffic there was could get through.  I knew right away I needed a tow truck and a big one at that.  Had to hook up my booster so I could call the Napa Towing Service in Ajo.  They said $150 an hour and I said come on out.

About 3 o'clock out comes an elderly gentleman with a two wheel drive flat bed and a winch to pull cars up  on.  His name was Bill.  We assessed the situation and tried pulling it out forward but the winch wouldn't budge it.  Tried pulling it out backwards but the truck would just spin its tires.

Bill finally called his boss, Jerry who runs the Belly Acres RV Park and he said he would be out shortly.   Jerry came out quickly in a 250 Ford 4-wheel drive dually.  I took one look at it and said I don't think this can do the job!  Jerry agreed and said he planned on using the flatbed truck.  He said Bill had only been on the job four months and didn't have a lot of experience.

It's five o'clock now and the sun will be going down soon and my stress level is up a notch or two.  Jerry surveyed the situation and said he would place the flatbed ramp under the hitch and push while I put on the diesel and the plan is to push it forward.  Five minutes later I was in the road with all four wheels safely on the ground.  Thank you, Jerry!  All this for $150 😊.  Jerry didn't charge me for the training experience Bill received.

Just as the Sun sank into the West I finally pulled into my new site and called Dolly to let her know what happened.  I told her if I ever get stuck again, I'm selling the White Lion and retiring from my travels!  She said, "Sure you will!".

I'm exhausted and tired.  Guess I'll try for milk tomorrow.  Too late for dinner, so will just have pudding with whipped cream and call it a night.