Slept rather well last night considering.  Because I'm facing North/South in my new site I saw the predawn sky.

Got up at 8 o'clock but no cereal this morning because I have no milk.  I'll remedy that sometime today.  I decided to keep my activities to a minimum today.  Don't need another crisis on my hands.

I set-up the Dish early in preparation for tonight's Gold Rush.  Then, we laid around an absorbed the beautiful sunny day with a slight breeze.  High today will be 70 and that is perfect.

I checked over the White Lion in the daylight and I noticed there are drips coming from around the black tank exit pipe.  I quickly placed a pan underneath and will see how big a problem it is later.  Didn't crawl under to look, but will later when I see how much is leaking.

Around 1:45, Yuma and I headed to Why, ten miles south on hwy 85 to take a few mural pictures and to see if they have whole milk.

Went inside the store and they did have milk in the half gallon size but only 2%.  No whole milk.  Yuma won't even drink the 2% stuff.  Was going to just go home and call it a day, but as I approached Darby Well Road, I decided to take Yuma into the Ajo Plaza so he could sniff around in the grass. 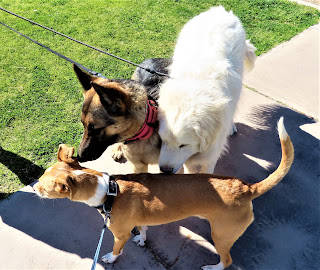 He even got to meet two big dogs.  Thank goodness they were friendly.  They sniffed a little and off we went.
Instead of driving all the way to the north end of Ajo, about three miles, I stopped at the Dollar Store just around the corner and I'll be darn if they didn't have half gallon whole milk on sale for $3.15.  Could have gotten a gallon for $3.85, but I didn't.  Glad I didn't stop at a Five Dollar Store 😀

Got home at 3 o'clock and checked on the pan under the MH and it appears to be a problem that has to be handled sooner than later.  Decided, I will just keep emptying the pan back into the toilet till tomorrow and I will crawl under and see if I can stop it temporarily or not.  If not, I may be heading to Tucson sooner than planned.

Got dinner over early tonight.  I was done by 5 o'clock and watched a part of last week's Gold Rush and then the new one at 6 o'clock.  At 7 o'clock, I started my post and as I'm finishing up, Yuma couldn't wait any longer and went to bed.  I think he's giving me a big hint that it is time to call it a day.  I'm sure me being upset yesterday had an affect on him too.

I almost missed the Moon rising in the East tonight, but caught it before the Sun's rays were gone.  I'll watch more closely tomorrow night. 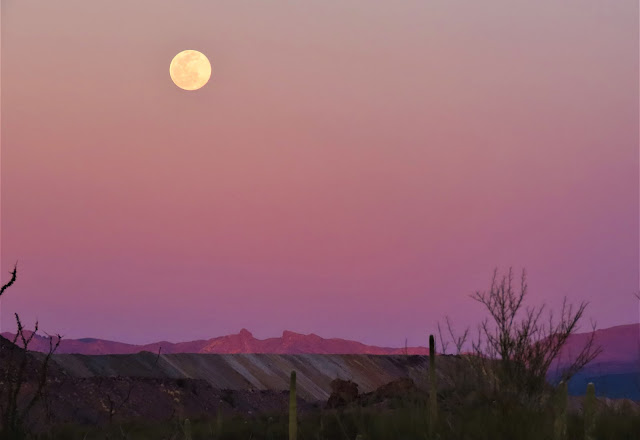 Thanks for stopping by.
Posted by Doug Laning at 10:05 PM