Slept fairly well for the first night on the road.  Had a short breakfast and took Yuma for a walk and we were on the road by 9 o'clock.

It was cloudy and a light rain started around Springfield soon after we started our drive and lasted till Joplin at the Missouri/Oklahoma border. 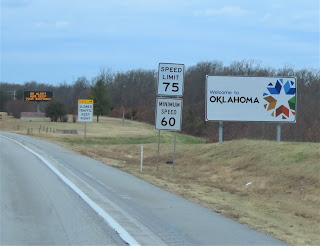 Had small sprinkles till Tulsa, Oklahoma but they were not bad.  The winds really picked up to around 20 mph in Oklahoma with gusts in the 30s out of the North.  It made driving kinda rough.  They lasted the rest of the day.

My big worry was getting through Oklahoma City and it was hard.  There was road construction on I44 going into the city and the hook-up to I40 was difficult.  The roads were really bad.

I was expecting to find a rest area about 30 miles west of OKC but there wasn't one, so I drove an additional 20 miles to the Walmart in Weatherford, OK.

Stayed here before and with the temperature getting down to 21 tonight, probably a good thing.  Got here at 4 o'clock and we are in for the night.  I'm sure the heater will be going tonight.  Luckily, the wind has died down. 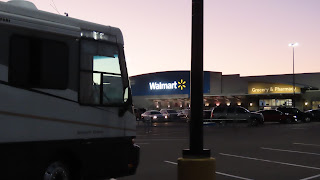 Had dinner already and just finishing my blog.  Only 6:30 but I'm ready to lay down and rest.

Traveled 387 miles today and took 7 hours.  Stopped twice for diesel and one stop for a short break so Yuma could walk around a little.  He is settling down, but I think he would rather be at home.