Made it to Chickasha, Oklahoma

Didn’t sleep well last night with first day travel jitters and all.  It got down to 16 degrees in Lebanon, Missouri and that was cold.  I decided to leave my new Wave heater on low all night, but I kept worrying I would run out of air and die.  But, there was plenty of air for all of us, so my worries were unnecessary.

Got up at 7 A.M. and took Yuma for a walk.  Every time he looks out the door, I think he is hoping to be home.  Poor Yuma.  He hates the cold, but he also hates leaving home.

They had gas for $2.08 next door to Walmart so stopped in to fill up.  Unfortunately, I had to wait about half an hour for them to get their card machine hooked up so I could pay.  They were apologetic and I was nice about it.  Kept reminding myself, I’m not in a hurry.

Got on I-44 at 8 A.M.  and headed for the Oklahoma border.  I’ve got to go through Tulsa and Oklahoma City today.

It was crowded on the road today and the sun I had early on quickly disappeared and clouds moved in.  Luckily, it is getting warmer the farther I travel south.

After passing Springfield and Joplin, I moved into Oklahoma and the toll roads.  All of I-44 is toll.  Cost me $11 from the border to Tulsa and $11 from Tulsa to Oklahoma City.   Had a pay forward for the toll from OKC to Wichita Falls, Texas.  The lady in front of me paid my fare, so it was free.  What a nice gesture.  Quite a few road construction areas between Tulsa and OKC, but didn’t slow us down too much.  I like going 60 better than being passed by everyone going 75.

OKC was a bear again this year.  They had I-44 marked well so I had no real problems, but all the lanes were crowded with people wanting to get somewhere fast.  They knew where they were going and I didn’t.

Once, I cleared OKC I dropped about 35 miles south on I-44 and stopped at the Walmart in Chickasha, Oklahoma, arriving about 3:30 in the afternoon.  As I was coming into the parking lot, there was a man standing by his dilapidated Winnie RV with a sign saying he needed gas.  I’m sure he comes here each day hoping for a handout, but I gave him $20 to pay my pay forward debt.  Now I feel better. 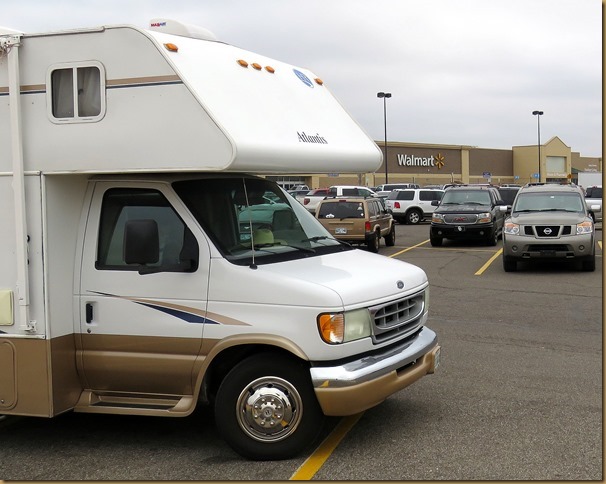 This evening is Gold Rush, so while I’m writing my post, I’m trying to get my Dish receiver to work.  Been at it for over an hour and it only finds one of the three satellites, so it never finishes the test.  Might not get to watch TV tonight.  Bummer!  Called Dish tech support and even they almost got me there, but not quite.   After three hours guess I will try again later.

Gave it one more try and guess what?  I’m watching the last half of Gold Rush!!!  It is a two hour show this week, so I’m ready.  Persistence pays.

Time to start fixing something for dinner.