How did I end up in Columbus, New Mexico

It was cold again last night.  Had to turn on the Wave Heater around 1 A.M and then I fell back to sleep till 6 A.M.  It was very quiet and I had a good night’s rest.

When I went to publish my post last night, I found out I had only had one or two bars of Verizon.  Sooo, it took about an hour to finally publish.  It was too cold to set up my internet booster, plus I was too tired to mess with it.

When I woke up and looked outside, I could see it was drizzling again and very foggy.  Temperature was 27 degrees, but there was no ice.  Don’t know why.

We left without eating breakfast around 7 A.M. and got back on I-20 west.  I figured we stop around Van Horn and eat.  It remained foggy and drizzly and at times it got really foggy, but didn’t have and problems with ice.

A little before 10 A.M.  just as we crossed over the Guadalupe Mountains and about 25 miles from Van Horn THE SUN CAME OUT!!  First time I’ve seen the sun since starting my journey.

We slid off the end of I-20 onto I-10 and stopped at a rest area near Van Horn to rest and eat breakfast.  It was so nice!.  Stepped out of the MH with my sweatshirt and coat and immediately removed both.  The temperature was 64 and with the sun and no wind it felt great!  I’m now in the southwest!

Don’t those mountains in the distance and that tree shade look marvelous? 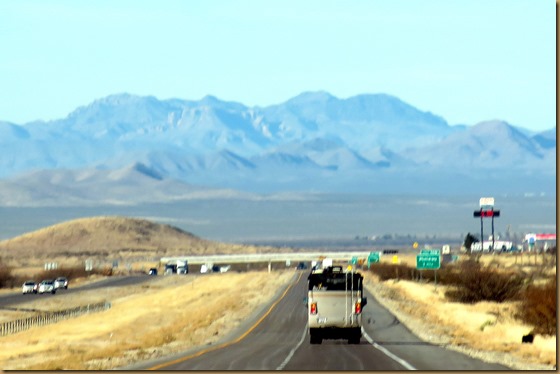 Now I only have El Paso to tackle.  I’ve heard it is a bear with all the traffic.  In fact Al and Kelly took an alternate route they learned from some fellow bloggers and they loved it.  However, since I don’t have a navigator and I can’t remember two things at once, decided to go with my GPS navigator.  Turns out that because it was Sunday and New Year’s Eve, the traffic was not bad at all and I buzzed right through.  It was a maze though. 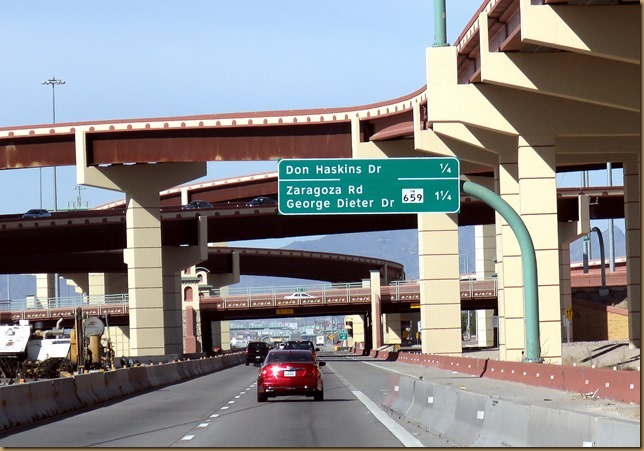 Now,  here comes the interesting part.  I noticed my GPS navigator was having me leave I-10 at exit 8.  Like a good fellow, I did as I was told and blindly followed Miss Navigator, knowing full well my destination was on I-10.  I just figured she knew a short cut.

It wasn’t long before I was west of El Paso out in the middle of nowhere.  Miss Navigator had me turn onto Columbus Road and said to follow it for 56 miles.  At this time, I stopped and adjusted my GPS to see where I was headed.       Turns out when I entered a random address in Deming, because it requires and address entry, I picked an address south of Deming, but still a Deming address.  This route must be closer to that address, so this is why it sent me down Columbus Road instead of I-10.

So down Columbus Road I went and then looked at my gas gauge and I had a little less than a quarter tank of gas.  Not any sign of humanity anywhere along the road and i saw very few cars the whole 56 miles.

Turns out Columbus Road is hwy 9 and goes to the town of Columbus, New Mexico and of all places that is where my friends, Al, Kelly and Pheebs stayed for a couple of days.  In fact, they just left there this morning.  If you want to know a little about Columbus then read their blog – Travel With The Bayfield Bunch.  What a coincidence!

Got there around 3 P.M. and luckily they have one gas station in Columbus and I got $50 of gas to tide me over.  I decided that I would not go the twenty miles north to Deming, but stay at the RV Camp that Al and Kelly stayed in for the night.  Can’t beat $9.

Here’s the Columbus water tower at the main crossroad in Columbus. 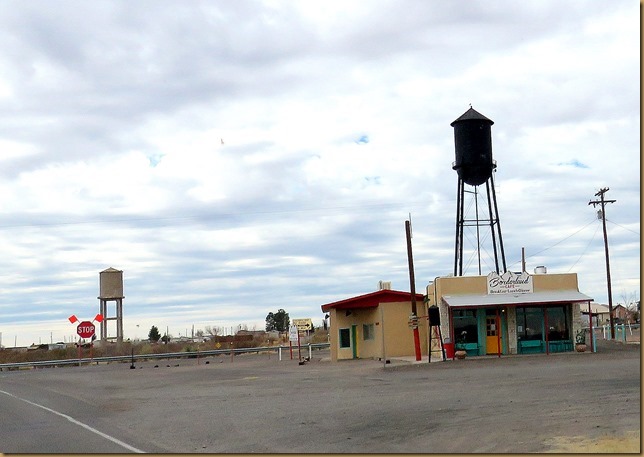 It is quiet here now.  Don’t know about midnight.  Al says there may be some shooting going around that time.  Poor Yuma.

Got my water, ate a little lunch/dinner and finished my blog and the weather is great!.  Can’t get any better than that!