I woke up this morning at 3:45 with an epiphany running through my head.  To me that means remembering something my old brain knew but had forgotten but then remembered again 😮.

There is a reservoir in one of the bays near the engine that holds automatic transmission fluid.  I knew it had a small leak and I was supposed to keep an eye on it and top it off when it got to the minimum level.  Well 😖, oh forgetful immediately forgot about that till this morning at 3:45 when I had my epiphany!

Could hardly sleep wanting to go out and check the fluid level but I held out till 7 o'clock.  Then I raced out and sure enough it was waaaay below the minimum.

Excitedly, I called my brother-in-law, Evan to ask him if this could have caused my problems.  Evan had worked as a diesel mechanic in his past life and would know what that reservoir is for because I sure don't.

Evan burst my bubble.  He said the fluid is used by the slide and the levelers and had nothing to do with Check Engine lights 😩.

By this time it was past 8 o'clock and the workers over at Midway Diesel were hard at work.  They work till noon and I hope someone comes over, so I quickly got dressed and took Yuma for a walk.

We had our normal leisurely breakfast and it was noon when we were finished.  Never heard a word from the boss man.  I'll go over on Monday and see what the plan is.

Last night several commenters mentioned tandem skydiving around this area.  I didn't give it much thought.  Who would ever pay to jump out of a perfectly good airplane 😏.

But, Nick pounced on the idea.  He checked the comments out and lo and behold we find that little Eloy, Arizona is the skydiving capitol of the World! 😲  Nick has tandem jumped twice and just loves the excitement!  I told him if he wanted to pay $200 to jump and he had the money, go for it.

He called and made a reservation for 1 o'clock tomorrow.  I will take him to the airport about 6 miles from where we are staying.  Sometimes you wonder how things happen the way they do.  Eloy, Arizona was never on my list of places to visit 😒.

After that we drove out to the airport to make sure we knew the exact location for tomorrow.  They were busy today. 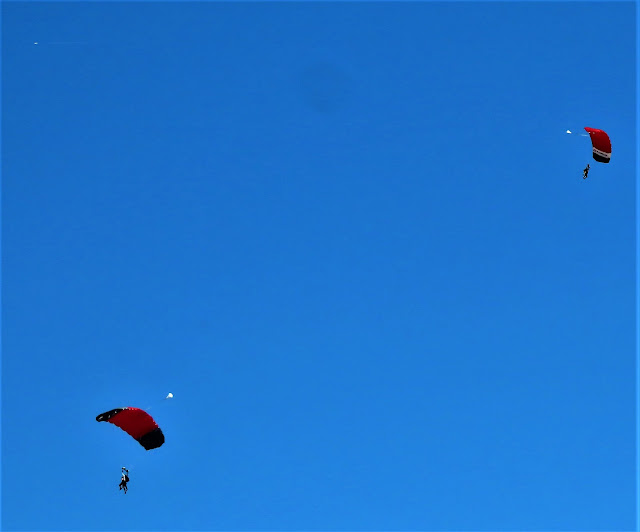 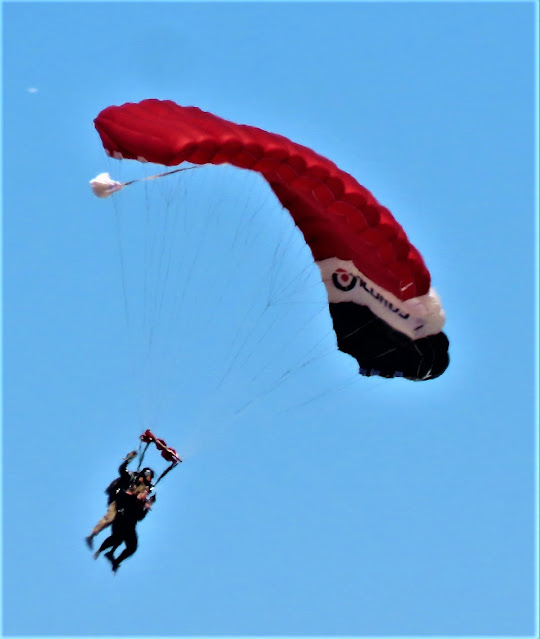 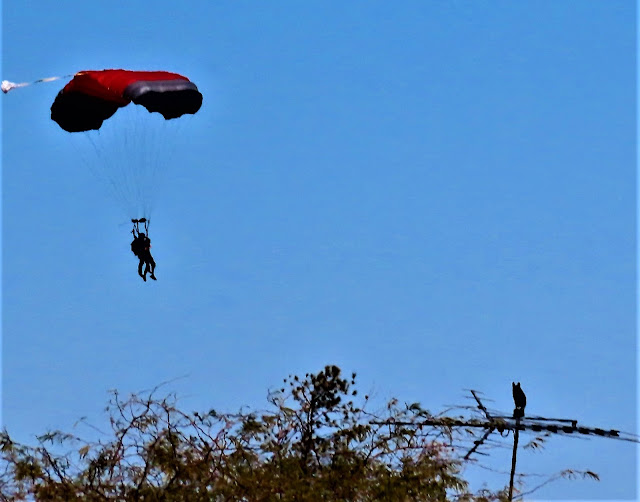 Then we drove around to see Eloy and could never find a town.  Just stores and service stations along the I-10 exit.  We finally stopped at Circle K for three quarts of ATF and called it a day.

Nick and I pulled our lounge chairs into the shade for a Chess challenge.  Too hot in the White Lion.  We battled down to a few good pieces and Nick even checked my King.  But, alas! His first win was not to be 😉.  It was a hard fought battle and it won't be long now when he beats Grandpa.

Had dinner and just relaxed till time for me to write my post.  Thought it would be short, but somehow I got blabber fingers again 😝.

Hope to have some great pictures of skydiving tandem jumps tomorrow night.