Nothing happening here in Eloy, Arizona

I guess I gave away the day yesterday in one picture.  We only made it about 35 miles down I-10 before the check engine light came on and the White Lion went into limp mode and then the engine just quit and we coasted to a stop about 13 miles before Red Rock at mile marker 213.

My goal was to make it to the Pima County Fairgrounds RV park and have the engine checked out in the Tucson area.  The place we stopped was a beautiful area.  Could see Picacho Peak and the Superstitious Mountains to the left.  The day was nice so no complaints there. 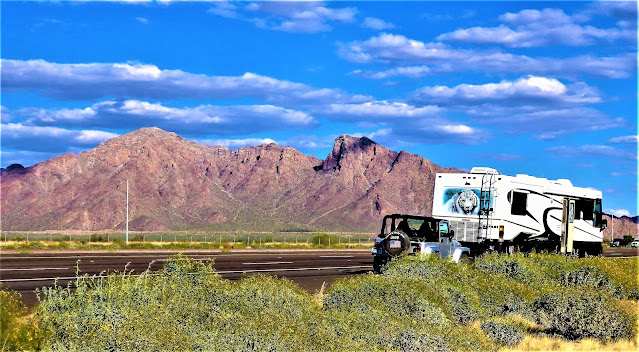 Tried starting the engine with no luck and finally, I bit the bullet and got on the phone and we called around for several hours trying to find someone who would help.  Finally, found a diesel shop in Eloy about 15 miles behind us that would send a tow truck.

It was 5 o'clock when a huge tow truck pulled up and a man jumped out.

He worked for about an hour and then we were on our way.  15 miles east to an exit and then back about 25 miles to Eloy.  Tow bill came to a whopping $881!😱  Thank goodness for towing insurance. 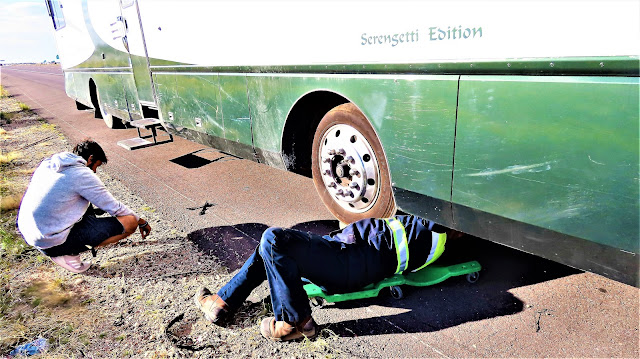 Talked to the boss man at Midway Diesel and  he said we would come up with a plan tomorrow.  That was it.  We had a nice steak dinner in the dirt lot across the street and called it a night.  Just another night of boondocking.😀

This morning Yuma and I were up by 7 o'clock.  Midway Diesel opens at 8 and I wanted to be up if they stopped over early.  We laid around and relaxed all day and never heard a word.  I got a few cleaning projects done, washed a sink full of dishes and took everything out of the fridge and cleaned it .

At 2, we played chess and and it was a long one.  Nick is getting harder to beat.  Took an hour and a half to take his King down today.

The shop closes at 5 so I walked over at closing time to check in.  Boss man said the plan is for me to stay put for the night.  That's good.  Now I can hook up the Dish and be ready for Gold Rush later.  Time for dinner and relax.  Kind of needed some time off my feet anyway.