Little further down the line

Awake again early at 7 o'clock.  Very warm last night and I slept with the windows open.  I think subconsciously I worry what is wrong with the White Lion and how much will it cost to get it back on the road or will it ever get back on the road.😰

I am planning on going over to the shop sometime this morning to ask the boss man if he has a plan.  He reminds me of Tony Beets on Gold Rush.  Always wears a black shirt.

Between breakfast courses, I walked over twice looking for the boss man, but the staff said he wasn't in yet.  Found out his name is Steve and doesn't like being called boss man.  On the third try, he was in his back office all by himself.

I stuck my head in and asked if he had a plan for my motorhome yet.  He is a tall man, mid 40s with ears like Spock.  Soft spoken and doesn't look you in the eye when speaking, but I like him and feel he is an honest guy.  He said he hoped to work me in sometime in the afternoon.

That's one worry off my plate.  I was thinking he might say they are just too busy and to get my motorhome towed elsewhere.😡  Went back to the White Lion and told Nick and then texted Dolly and Evan the news.

I tried a quick start effort on the motorhome but it would not start.  Will wait till they come by to haul it in and try to start it in earnest.  Nick and I put everything back into their storage bins and waited.  It is getting hot around here now.  High of 85 today and very little breeze.

It was noon, when Yuma started barking and I looked out to see a City of Eloy vehicle stopped in front of my door.  Went outside and talked with a short heavy set young man that looked a lot like Elmer Fudd.  He said that the city council had gotten a complaint that someone was squatting on city property and his job is to inquire.

I explained why I was there and was not squatting.  He said he wasn't going to push the issue but basically, I was given 48 hours to move.  As we were talking, Steve drove by in his truck so now he knows the city is involved.  I'm sure Steve has had many encounters with the city and is well aware of the no overnight parking rules.

Having been playing chess lately, I'm beginning to think each thing that happens is a chess move resulting in an attack or retreat.  We laid around till 2 o'clock and decided we would play a game of chess.  Today's game was a long drawn out game of slow death for Nick's King.  He died as the last man standing.  No resignation in Nick.  Played to the death😄.

At 4 o'clock we knew it wasn't going to happen today.  Every bay was full and there were two semis out in the field with us.  So discouraged at this point.  Just before 5, the two trucks left and then after closing, two trucks left the bay area.

Our chess move minds were racing.  We believe the moves will go like this.  In the morning, someone will be over to hopefully either get the motorhome started or tow us into one of the open bays.  Soon after, I will receive either good news that the WL can be repaired or bad news that the engine is in pieces.  Not ready to think of the moves after the diagnosis.

I am too hot and tired to fix dinner tonight, so I took a nice cold shower and Nick and I jumped in the Jeep to find something to eat.  We found a Sbarros at a truck stop down the road and Nick was familiar with it so we stopped in.  It's a pizza place.  I still can't get over spending more than $40 at a fast food joint.😫 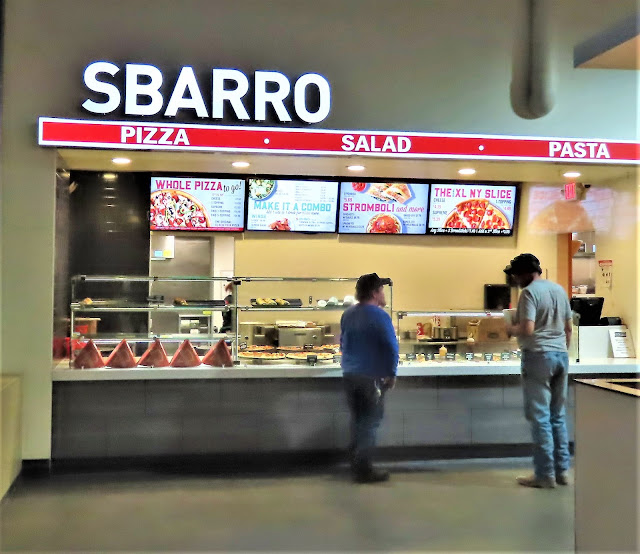 As we left the parking lot, there were hundreds of noisy black birds in the trees ushering in nightfall.

I feel tired tonight and ready for tomorrow to bring relatively good news.  Going to call it a night right after this post hits the airways.