After breakfast, Yuma and I planned to hike further into the canyons inside Saddle Mountain.  But our plans changed.

I drove the jeep into the same canyon as yesterday, but as I was driving up the canyon, it appeared there was a cave high up the mountainside.  I couldn’t resist.  We stopped the jeep and started up the mountain.

Unfortunately, I didn’t take a photo of the black hole I saw up there, but it was behind the mountain on the right in the white area.  I took this photo yesterday when we were here.

Poor Yuma had to follow his foolhardy Dad all the way to the top.  Of course, it was getting hot.  Heat records are being broken everyday in the southwest.  It will be 90 degrees today.  Way too hot for an old man to be climbing mountains.

I need to be on the lookout for rattlesnakes.  It is warm enough for them to be out of hibernation.  Would hate for Yuma to get bit up here.

The jeep is between the wash and the road on the left center of the photo below.

After all the climbing, when we got to the top of the white area, I found it was just a shadow in a recessed area of the mountain and not a cave.  What a bummer.

I didn’t see it yesterday, because we came later in the day and the shadow was no longer there.

The only good thing was the beautiful scenery up here.  Yuma got close to the edge, but I have a fear of heights, so I stayed back from the edge. 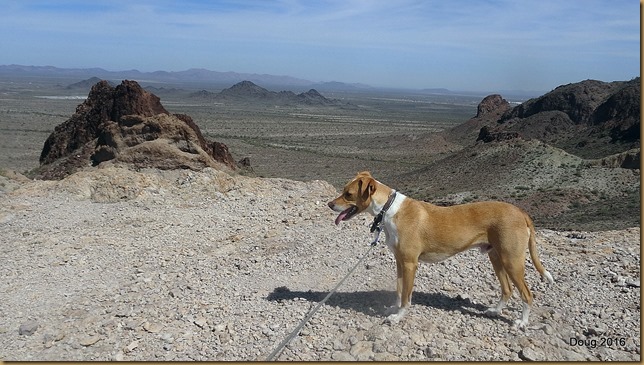 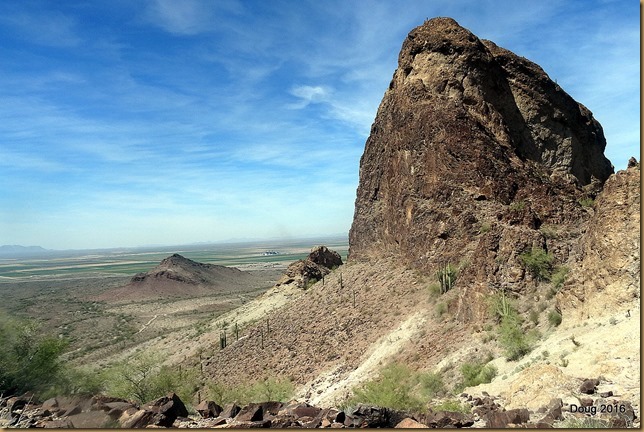 I see why it is called Saddle Mountain.

After the climb, my feet hurt and my legs were rubber, so we decided to call it a day.  Tomorrow is another day and tomorrow we will stay on track and explore the canyons inside Saddle Mountain.