Woke up this morning around 6 o'clock, but laid in bed till 7:30 waiting for sunlight.  I was surprised to see partly cloudy skies since the weather forecast said it was cloudy.

In preparation for a full day of clouds and rain I had turned the inverter off around 11 o'clock last night which shut down all 120 volt power from the batteries including the fridge.

When I checked battery levels this morning I had 75% charge so nothing dropped over night.  However, since the cloud cover was so light, I had 100% battery power by 8:30. :))   Here's what the skies looked like instead of rain this morning.
So, I didn't need to shut down the fridge last night.  It'll take time to learn what's best in different situations.  The reason I was cautious was because the converter was disconnected and I had no generator back-up till Tom puts the relay switch in today.  Best to err on the side of conserving battery power when cloudy conditions are forecast.

When I took Yuma out for his walk this morning, I ran into Toby and Elizabeth with Roxy outside having their coffee.  Yuma and Roxy were ready for action. 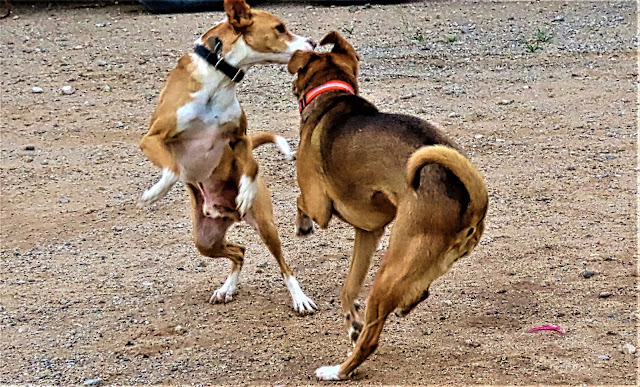 Meet Roxy's parents, Toby and Elizabeth.  They are from Indiana and staying at RV Connection as I am having solar panels added to their trailer.  They are both new to the full-timing RV world.  I wish them all the luck in the world on their new adventure.
My phone has died one time too many.  It just won't hold a charge anymore and a new battery can't be added, so around noon I was off to the Verizon store.
Andre is the manager of eight Verizon stores in the area and he really knows his phones.  I pretty much knew I wanted an Android phone with a lot of storage, great camera and be ready for 5G when it is available in Bloomington.  Andre had the perfect match.
I won't scare you with the price, but I did get a second phone just like it for Dolly for $300.  She is going to love it.  And they will mail it to her for free.  Can't beat that deal!

When I got home, I still hadn't heard from Tom.  He's been busy working on another motorhome all day.  So, Yuma and I laid down to rest for awhile.  It had been getting pretty cloudy this afternoon and around 3:30 the rains finally came.  And it hasn't stopped yet.  They are calling for rain and clouds through Thursday! :((
Around 7 o'clock in the evening, Tom stopped by in the rain and was ready to work on getting my transfer switch installed so I could settle up and leave.

But, things didn't go smoothly.  He and his son, Jordan worked for two hours  but could not get the transfer from generator to solar power to work.  Everytime it would switch over, the inverter would cut off.

Tom needs to leave early in the morning for a job in Las Vegas, so this is how we ended up.  I can run the generator, but when I want to switch to solar power, I need to turn off the generator first and then push the button to turn on the inverter and vice versa.  Not automatic as it should be, but good enough till Tom gets back next week to finish the job.

So, my plan now is to head up to Lake Havasu, Arizona and check out the BLM up there.  Never stayed in that area before, so excited to check it out.  Unfortunately, they are calling for cloudy and rainy days for the rest of this week, so we'll just have to see how it goes.

I have several errands to run tomorrow here in Yuma, so won't be heading up that way till Thursday.  It's already 10:30 and I'm ready for a little pudding and whipped cream and then Yuma and I are hitting the sack.