Woke up at 7:30 this morning and got out of bed at 8 o'clock.  Walked around the roads seeing how to get out of this rough area I'm in.  The roads have large potholes that White Lion doesn't like.  Someone told me this area is known as Snyder Hill BLM Land.

When we got back, I called lots of RV repair places in town hoping to find someone to fix my leak problem, but everyone is booked for weeks from now, so had to go with the do-it-yourself plan.

Finally fixed my coffee and crackers this morning.  As I was walking around I ran into Neal, owner of Yuma's friend.  He has the same solar set-up I have and he says he always uses his coffeemaker on solar power, so I tried it.  The battery strength remained 100% even with the draw, so guess I won't be using the generator any longer in the morning. 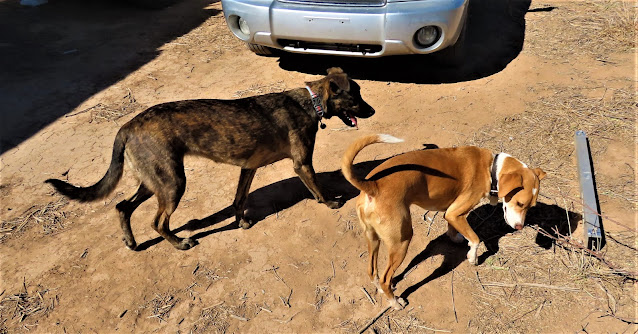 Neal and his wife Jen work on the road.  Their dog, Mattie I believe, is only a year old and is already bigger than Yuma.  They love playing and running around together.

After a shortened breakfast, Yuma and I made a run back into town to the Walmart.  I forgot whipping topping which is a must and I wanted to return the epoxy glue I bought yesterday.  Nancy, Kissack Adventures texted me to let me know they had Flex Seal at ACE Hardware, so I stopped by there and bought some.

Slapped that stuff on the black tank valve and let it set for the rest of the day.  Yuma is giving me moral support😊 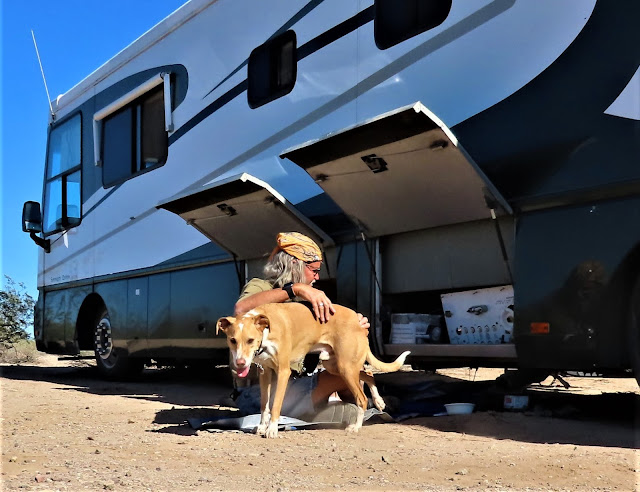 I went over to Neal's place and he was busy at work on his computer and his wife of four months was on the roof of their MH putting on a coat of rubber while getting a tan.  It is in the 80s and quite warm up there.  They've completely redone their 1993 MH over the years.

I asked him if he would stop by and help me get the White Lion turned around to make it easier to get out of here in the morning.  These roads are in terrible condition so going back the way I came is my best option and it is full of potholes.

Put my Dish out a 5:15 and I could not believe it worked first time around😀  Will wonders never cease!  Watching Gold Rush as the sun is setting.

I said I would only be here one day, but I just didn't feel like rushing everything I had to do today.  Getting too old to rush around anymore.  I get flustered easily.

Tomorrow is another move day but not very far.  Thanks for stopping by.