The Santa Anna winds came in with a fury last night and rocked me to sleep.   When I woke up at 7:30 this morning they were were still howling so made a decision to stay close to home today.

We had breakfast and braced for the first 90 degree day this year and by 11:30 we had to get out of here.  Peter commented that we should go up to Gates Pass so I looked it up and it is only 15 minutes from here.

So off we went.  Have to get to those pictures some other day, but it was well worth the short drive.  We were home by 2 o'clock and even the wind doesn't help the heat I feel.

Time now to finish up Mt Lemmon and hopefully yesterday's Snyder Hill adventure.  I guess we won't make it to the ski lodge.  The road is closed at this point and 1.5 mile hike from here to the top.  Sorry, I just didn't think I would have the stamina at this height of 8200 feet to make it alive😂

Some one was nice enough to take a picture of us at the stopping area. 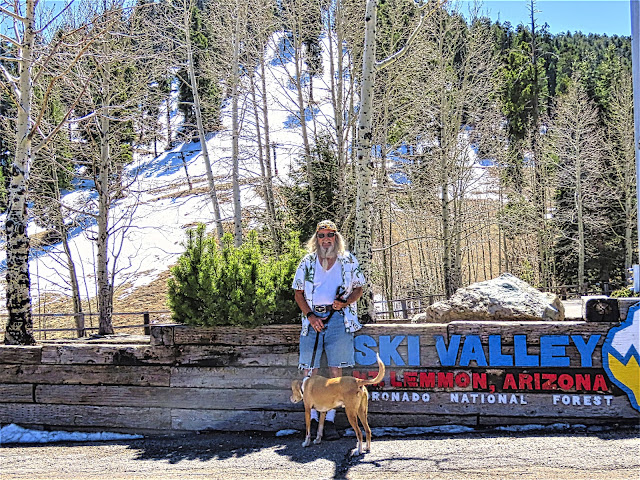 Before heading back down the mountain we went down about half a mile and drove through the little town of Summerhaven.   They were building like mad and the little town was crowded with visitors.  You can see the fire came right up to the town and may have destroyed part of it based on the building going on. 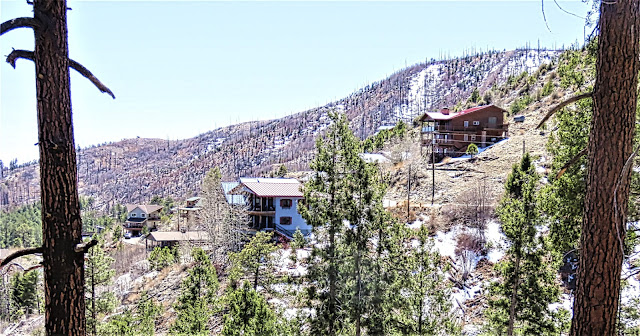 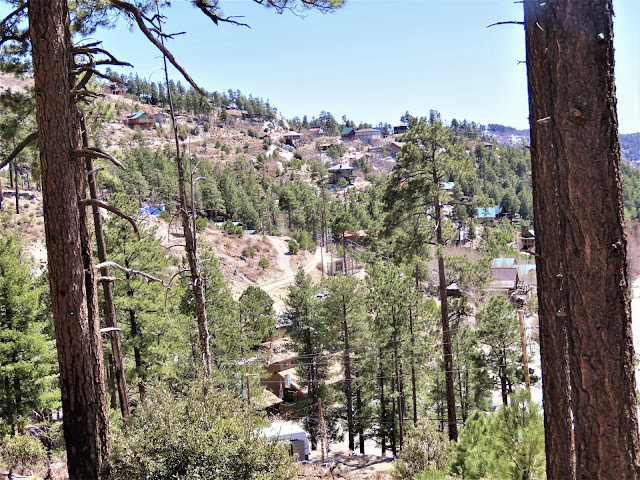 Nancy thought I should stop and get a plate sized cookie at the Cookie Cabin but I thought better of it. 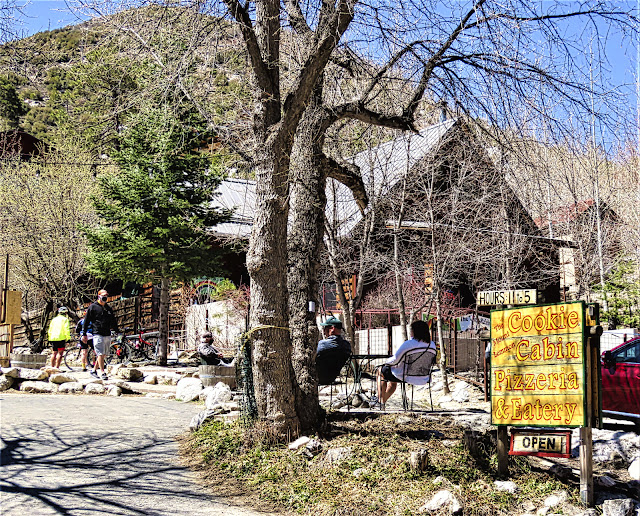 The road through town is probably less than a mile before it dead ends in the forest.  Looks a little different here than down below in the desert. 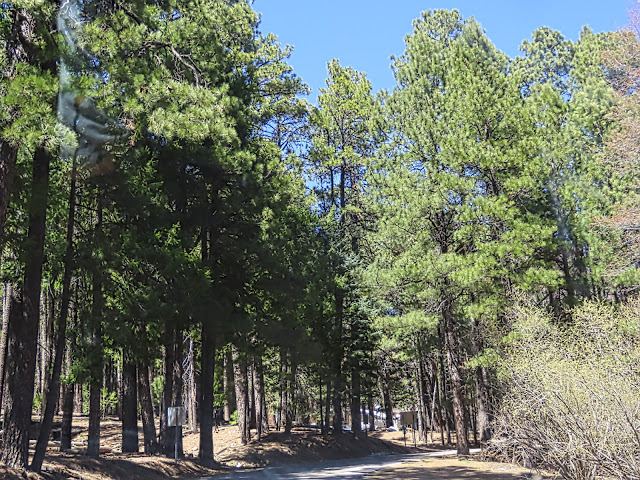 There's the last 1.5 miles of the mountain by road. 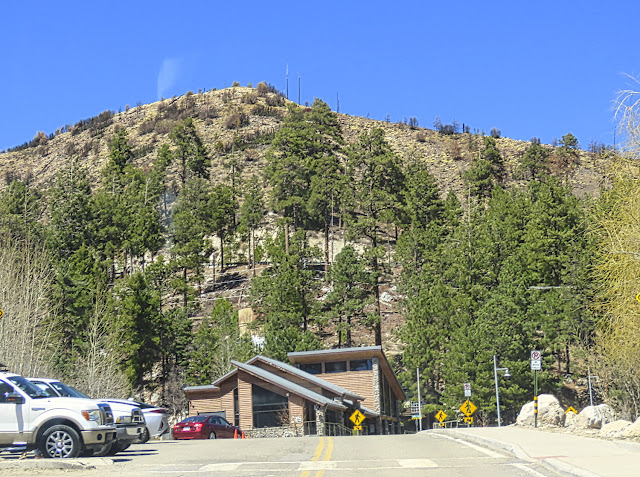 Got plenty of room to add my Snyder Hill hike yesterday.  When I peeked out of the front window of the White Lion yesterday morning, I was greeted by this little fellow just outside its home looking up at me while having breakfast😊 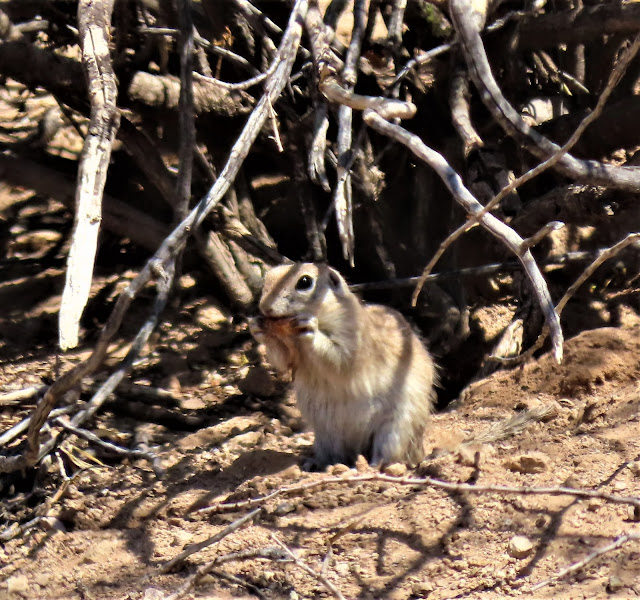 Here's where I'm headed from the White Lion.  As you can see it is not far away. 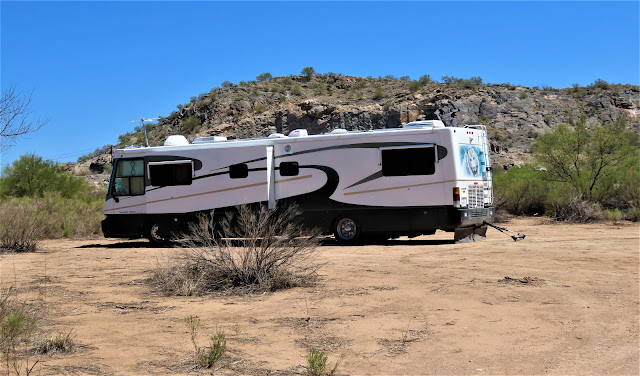 But, I still drove the Jeep as far as I could before hiking the remainder of the way. 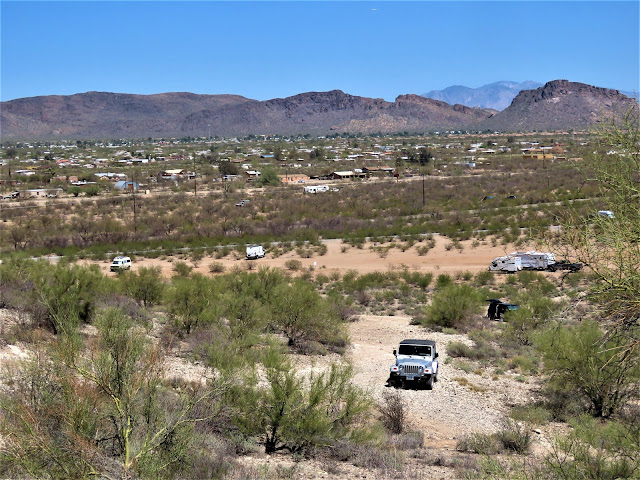 You can see why I didn't want to tear up the Jeep tires for such a short hike to the top.  The road is nearly non-existent at this point.  4 wheelers only. 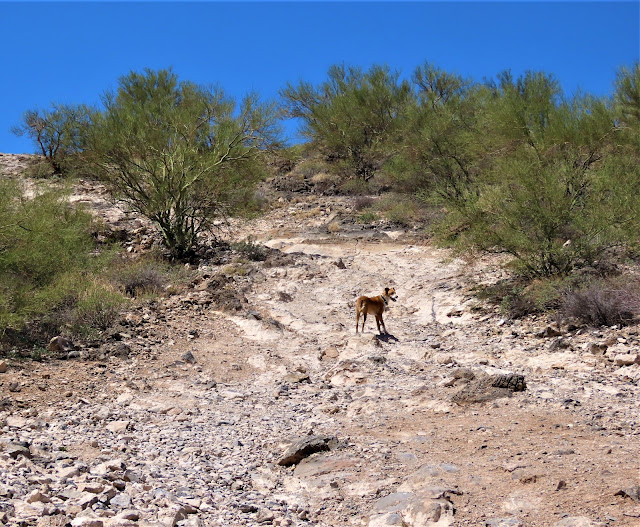 Immediately stumbled on a cave, but forgot to bring my flashlight.  Plus, a little leery of snakes trying to keep cool in there. 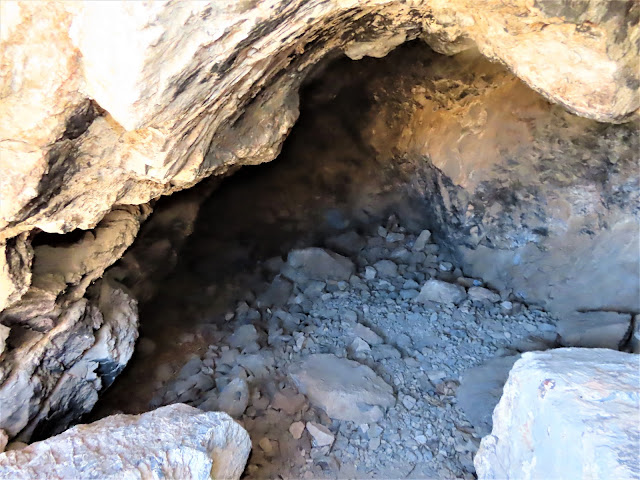 Harder than I thought by the time I got to the top.  Slipped and fell once and just barely caught myself before my face smashed into the rock surface. 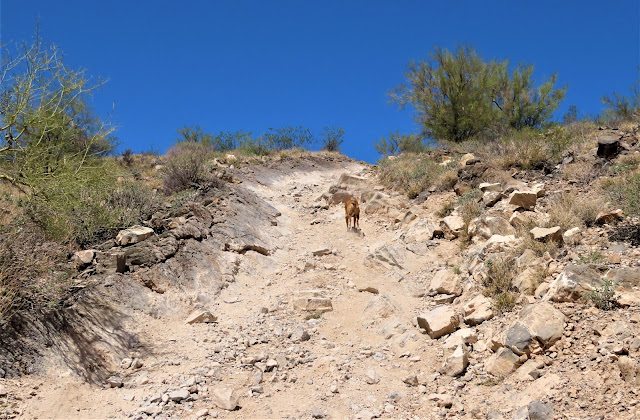 Finally to the top and looking around the area known as Tucson Estates west side of Tucson.  Looking to the east.  Tucson is on the other side of those hills following hwy 86 known as Ajo Hwy. 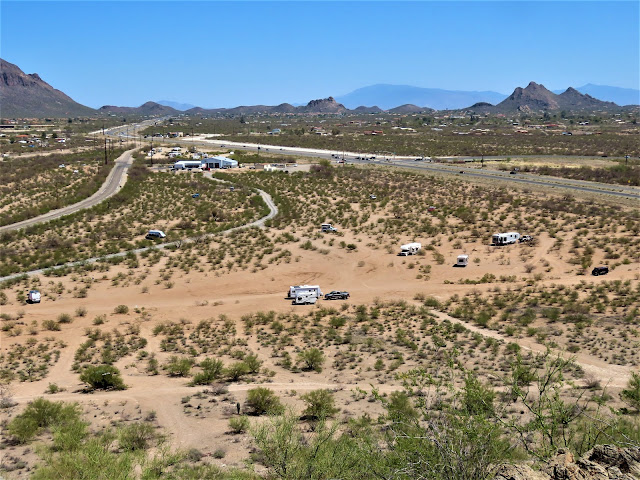 There is the White Lion in the center looking towards the northwest. 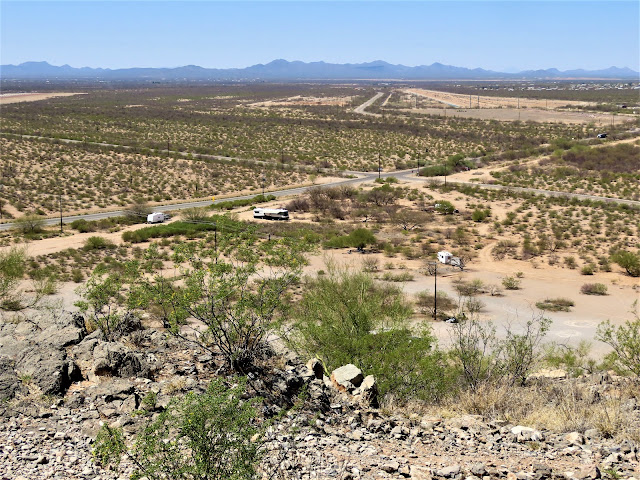 Looking directly north.  That is where Gates Pass is in the Tucson Mountains. 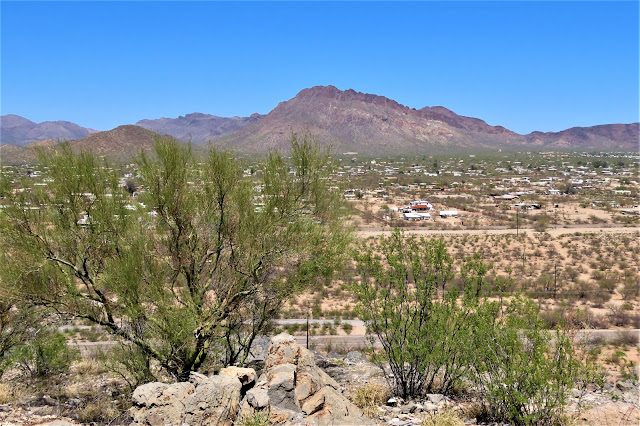 Looking to the southwest. 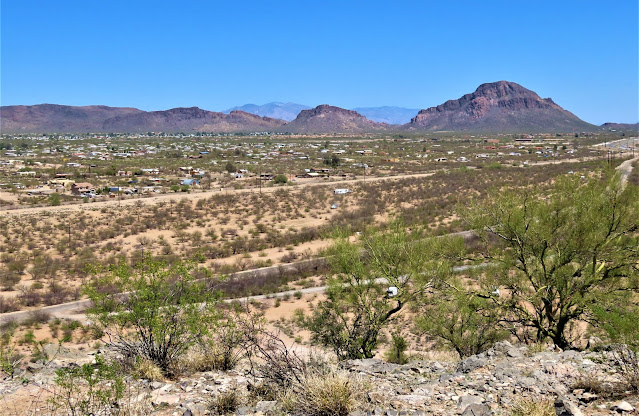 The wind is still howling and it is 4:30 now.  Hopefully, it dies down tonight.  I was laying in my lounger around 5:45 when Glenn came out for his evening run into town.  Asked if I could get his picture and he agreed. 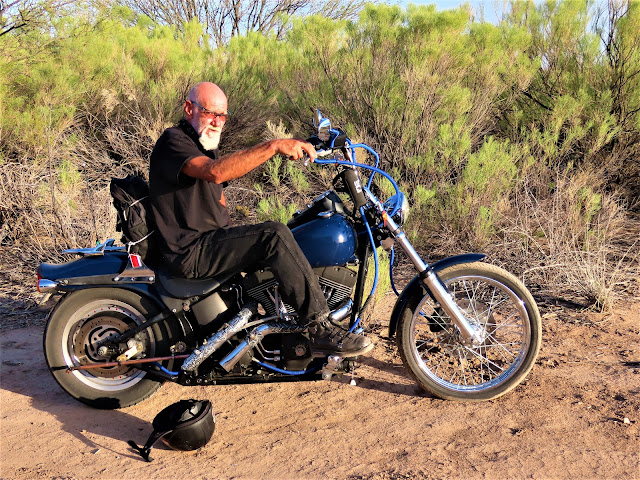 We talked a little bit and he said "Here, I got you something.  I was in the pawn shop today and saw this and thought of you."  I was shocked!😲 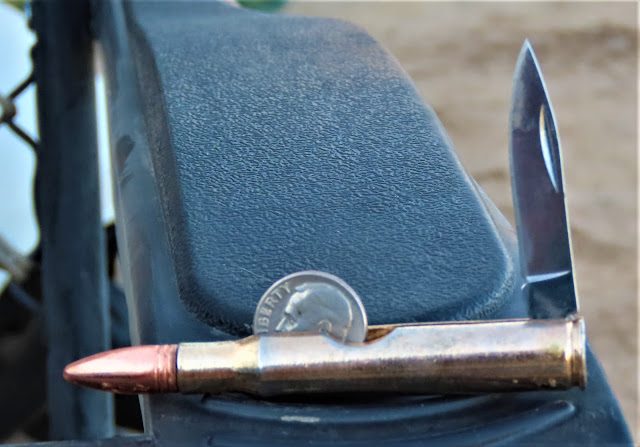 He said to give a knife to someone you must include a coin or it would be bad luck.  I will cherish this knife and the memory of Glenn (Darin).
Now, I must admit the first time I introduced Glenn to you, I thought I had remembered his name but I was wrong.  Yesterday, I asked again and found his name is actually Darin but I was too sheepish to say.  Finally got that out in the open.
Thanks for stopping by.
Posted by Doug Laning at 8:54 PM