Nice and quiet last night except for the wind gusts.  Temperatures stayed comfortable, even at that altitude.  Woke up with the sun and Yuma and I took our walk and then had breakfast.  On our way to Carlsbad Caverns National Park, forty miles north by 9 o’clock.  Hwy 62/180 is a great road.  Four lanes most of the way and no traffic.

It’s a 7 mile scenic road from the highway up to the entrance to the caverns.  It twists and turns all the way to the top of a  high plateau overlooking the countryside and dead ends right at the entrance building. 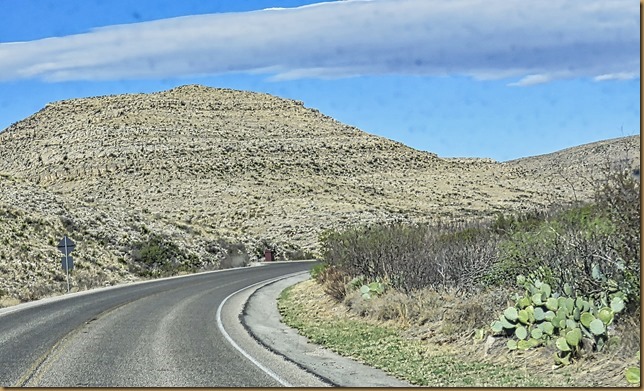 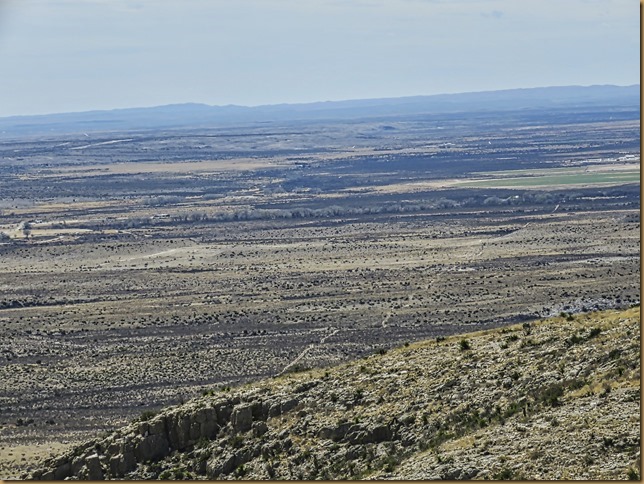 They offer guided tours and self-tours.  I elected the self tour again.  When I retired in 2007, I drove out here and visited the caverns for my first trip to the southwest.  It was July and I was in a Mustang convertible.  Much different than my mode of travel today.

I also had the option to take an elevator down 800 feet to the Grand Room or walk the original entrance down.  The walk down is 1 1/2 miles.  The tour of the Grand Room is another 1 1/2 miles.  I elected to walk down as I did back in 2007.  What’s sad, other than the entrance building, I did not remember anything about the caverns.  I guess it’s good in one way; I got to do it or the first time again!  The cost is $10 and nothing for those with a senior pass.  So, it was free for me.

Behind the Visitor Center are the buildings that housed the workers building the walkways in the caverns.

This is the open air atrium where people sit to watch the bats leave the caverns at dusk. 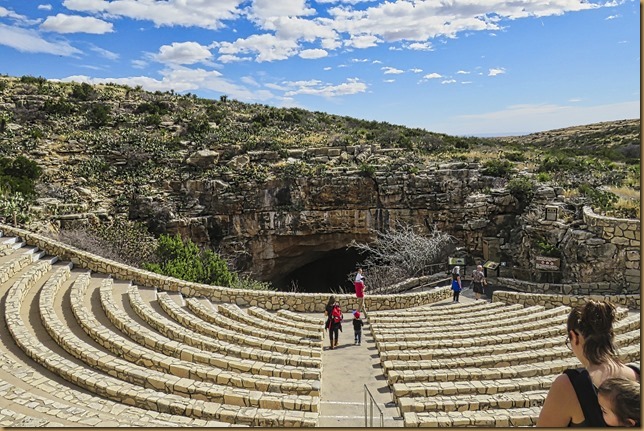 The original entrance we walk down. 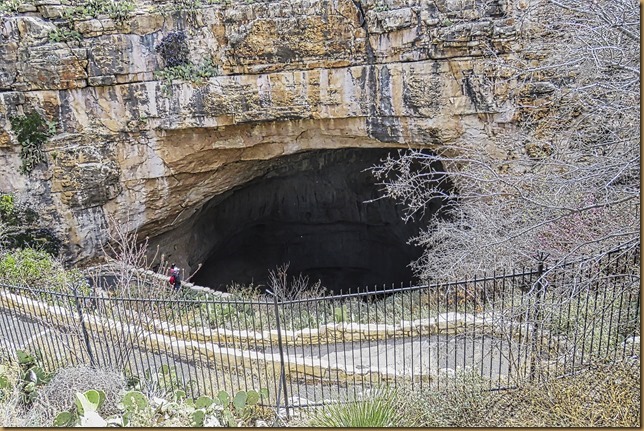 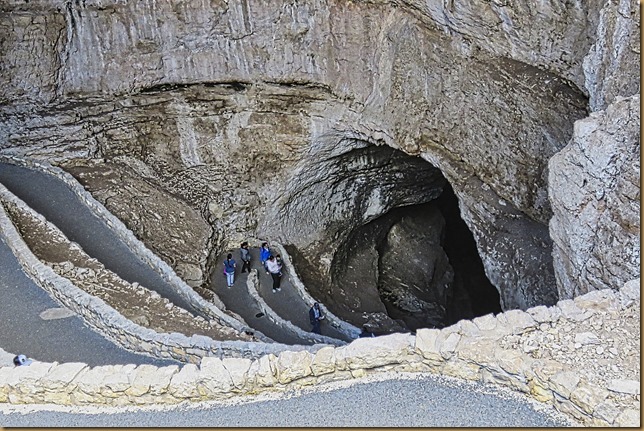 Looking up towards the entrance.  Those are Swallows flying around up there. 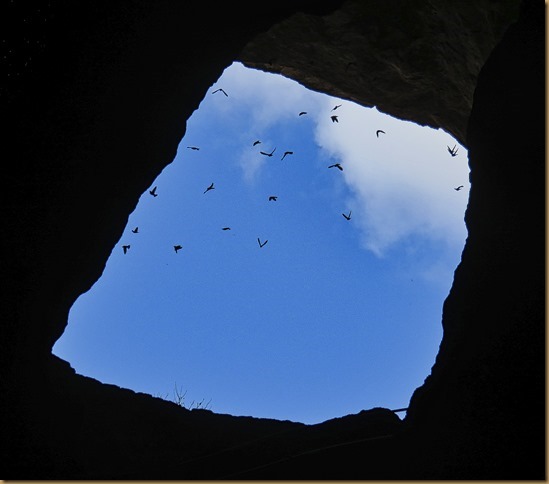 The entire walkway is paved and fairly easy to walk.  There were very young kids walking and some older folks too.  It was crowded and I got here when it first opened.  I’m sure it will be worse later on in the day.  Three miles was a lot for me.

From here, I will just let you look at some of the many photos I took.  I will just say, I was amazed at what I saw.  The cavern is huge and just filled with beautiful formations of all kinds.  I highly recommend anyone who travels through this area to stop and take the time to see this beautiful cavern.

The photos can’t convey the immense size of the rooms and some of the formations.  You have to go see for yourself. 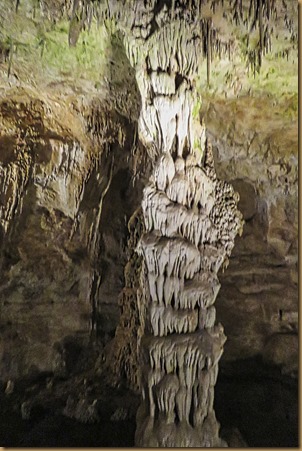 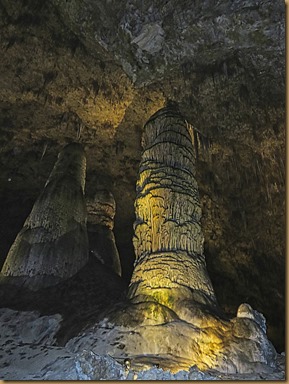 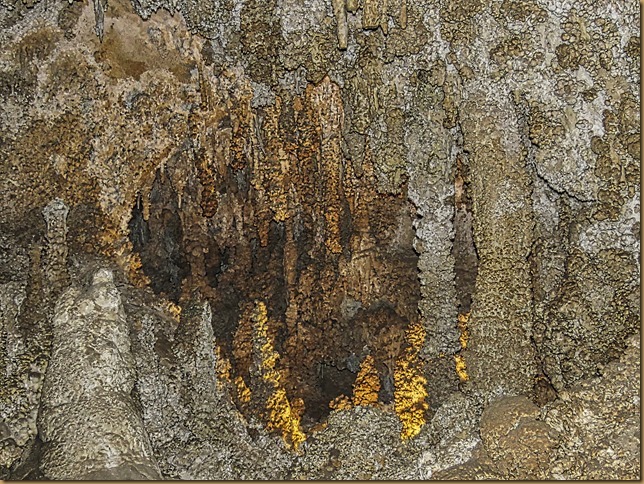 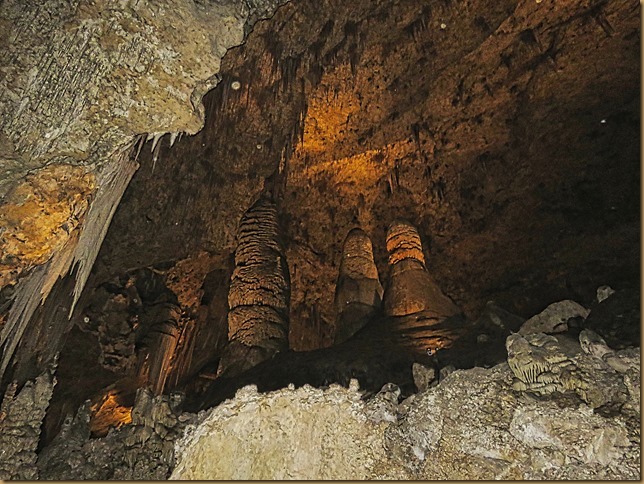 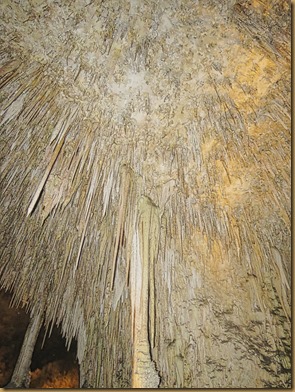 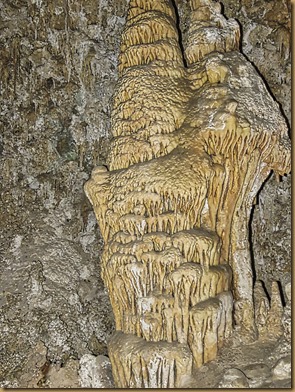 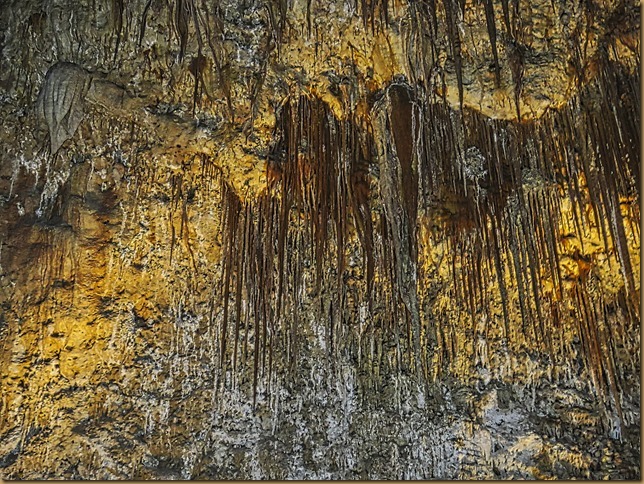 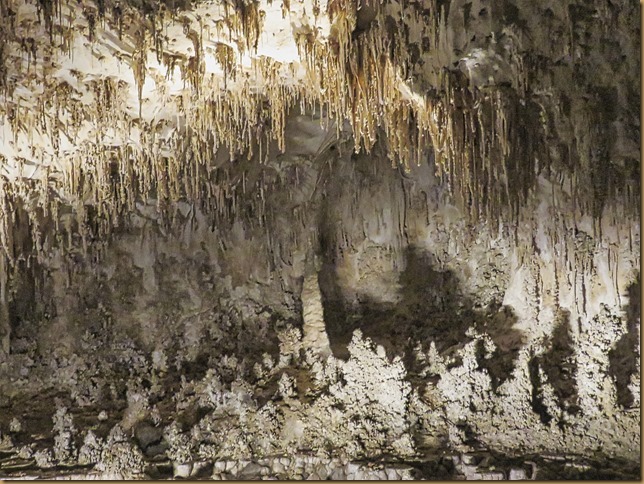 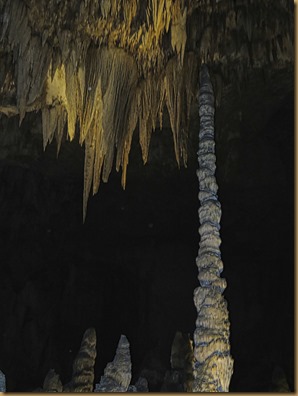 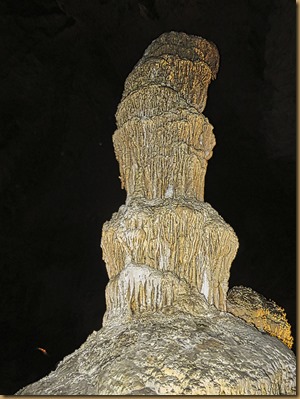 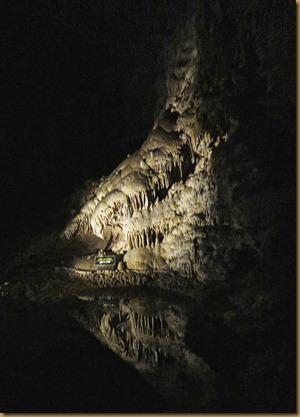 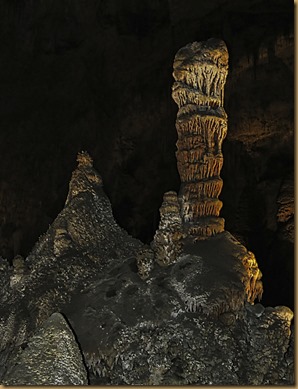 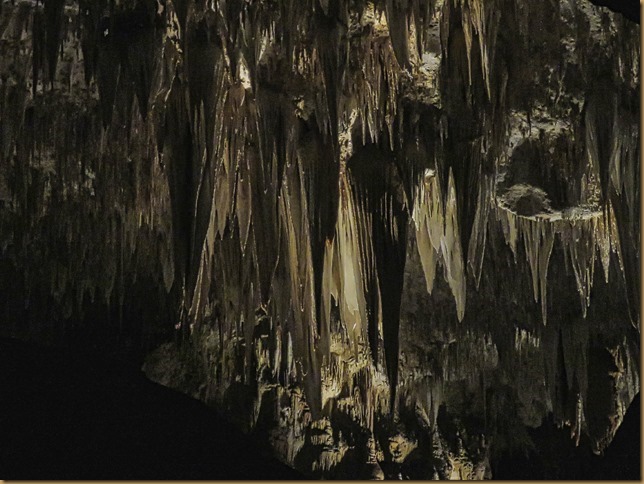 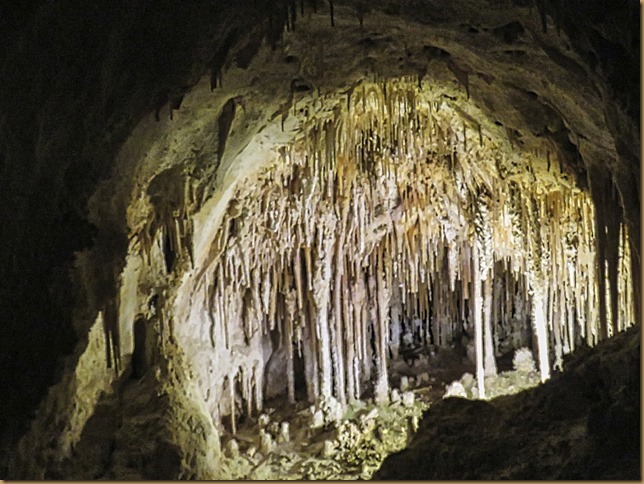 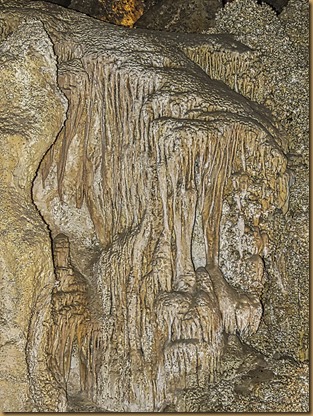 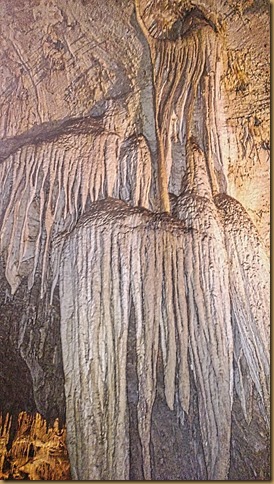 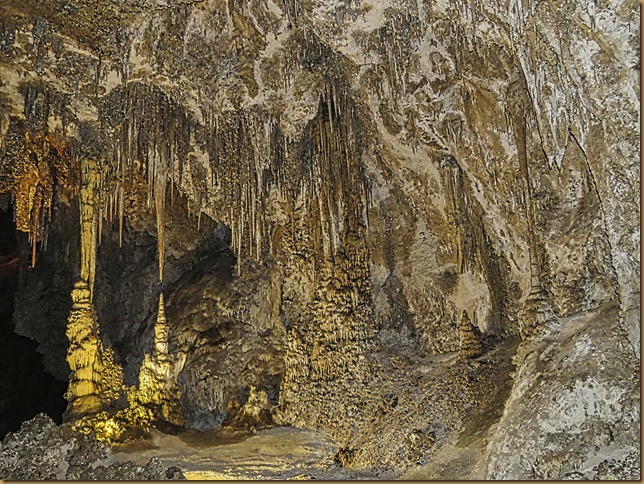 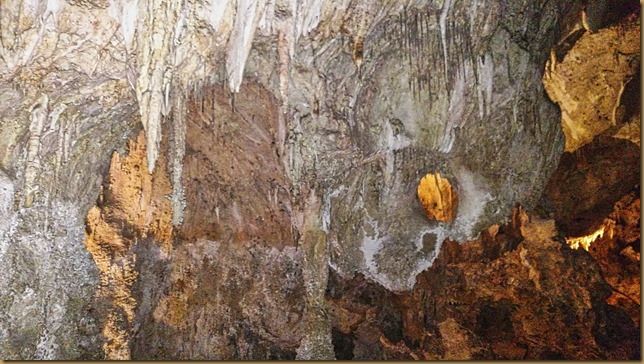 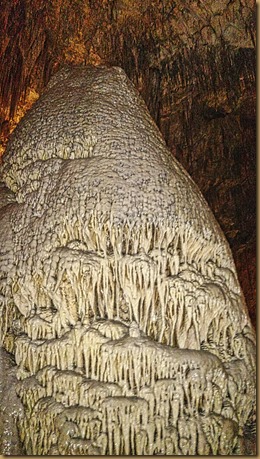 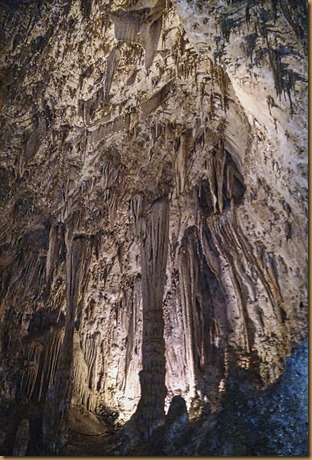 I finished with the tour around 1:30 and we were off.  I didn’t want to go far because I was tired and wanted to rest.  We drove 100 miles to Hobbs, New Mexico and called it a day.  We are camped at their Walmart for the evening.  The weather is warm at 82 degrees and partly cloudy.

Dolly mentioned the last two games of the Final Four were on today and I was able to catch the last game.  Kansas beat Duke in overtime.  I was for Kansas.  Dolly’s team Villanova beat Texas Tech and of course I was for Villanova.

Been a busy day but an enjoyable one.  Time for a couple of hours of The Walking Dead and then off to bed.