After two weeks of living under the shadow of the Superstition Mountain, it is time to move on.  This morning it was still spitting a little rain and there were low clouds on the mountain. 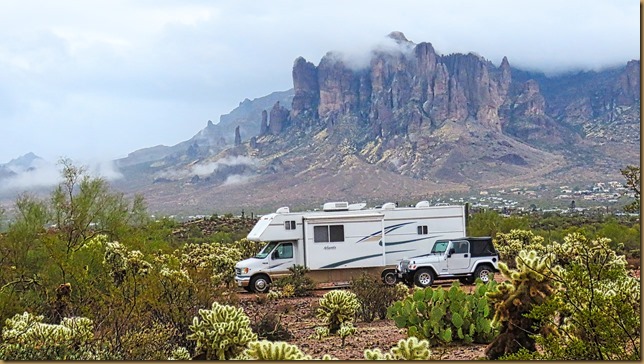 It was a nice warm night sleeping with the window open.  Without the sun, I almost overslept.  Got up at 7:30.  Deb and I had made plans to leave around 9 o’clock, so better get going.  Arizona doesn’t do Daylight Savings Time so now I’m on California time, two hours behind my family.

As I was preparing the outside for travel, Deb walked over and said they were staying one more day.  With the rain she and Riley prefer not to drive.  I already had my heart set on moving and the rain was not supposed to last long, so finished packing and we said our goodbyes.  Even Yuma got a hug.  He’s going to miss running over to their camp and bothering Miss Kitty.  And getting pets from both Deb and Riley (On a long and lonesome highway…. ). 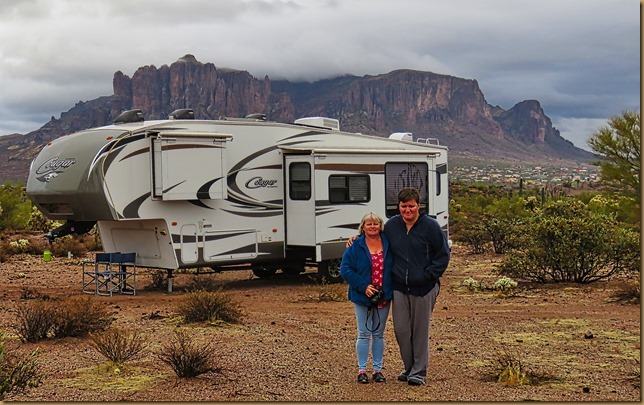 We got on the road around 8:30 and headed for I-10 towards Tucson.  Only 136 miles today.  Unfortunately I had a fight with my GPS.  I accidently put in the wrong city name and it kept trying to have me go west, when I knew Tucson was south.  I did listen at first and left I-10 thinking it was a quicker way, but it wasn’t.   Got things straightened out and we were finally on the same page.

The rain didn’t last long and soon there were just cloudy skies.  Picacho Peak is a familiar sight for those traveling between Phoenix and Tucson.  Stands out.

The drive out of Apache Junction and on through Tucson was nice.  Not much traffic on Sunday, but enough.  As Al of Travel With The Bayfield Bunch says, “I wish all travel days were on a weekend!”

Just before my turn-off for the grasslands, I stopped and filled both the MH and Jeep.  Now I’m ready!  Another four miles we turned south on Highway 83 towards Sonoita, Arizona.  Don’t ever put Sonita in your GPS instead.  You’ll never get to Sonoita.  The skies are now blue with large puffy clouds.  Just beautiful. 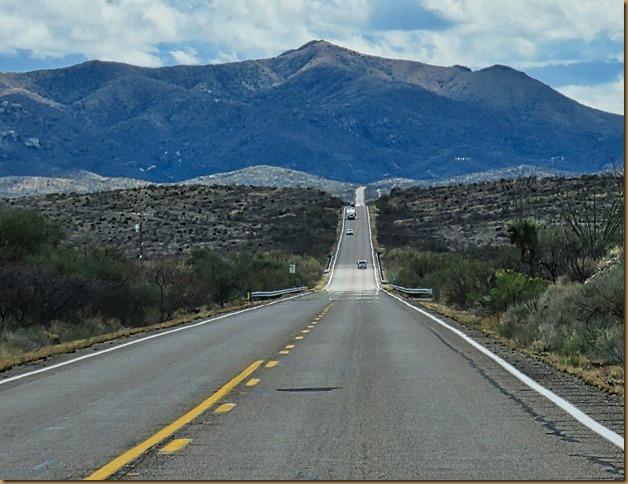 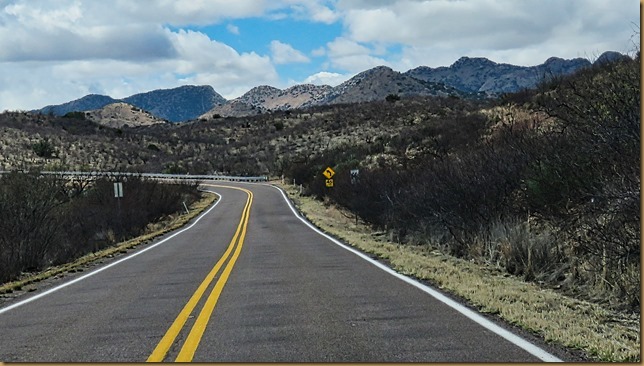 About twenty miles south, I turned east on Empire Ranch Road and into the Las Cienegas NCA.  Suddenly, I see wheat colored grass and off in the distance the Whetstone Mountains to the left and the Mustang Mountains to the right.  Just beautiful!

Stopped at the Information sign and Yuma marked it so we could find our way out.  Then drove down past the Empire Ranch.  I can just see one of the windmills and water tank.  The ranch is down in the valley.  I turned into Oak Tree Canyon to see if my old site was unoccupied. 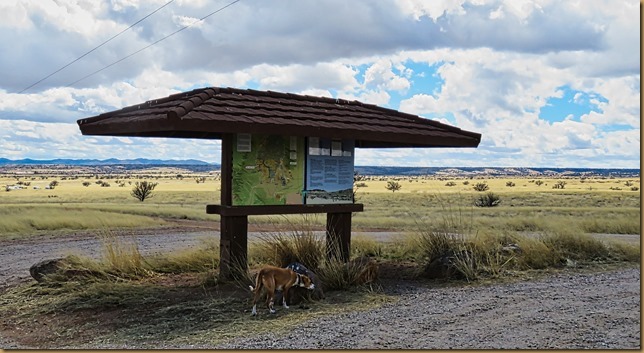 Had to cross a little creek that runs through the Oak trees. 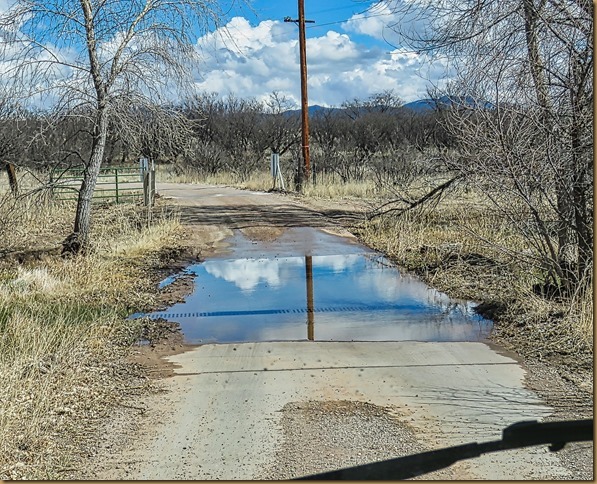 Last year, when I was here at this time, there was a large horse camp in the valley.  Sure enough they are here! 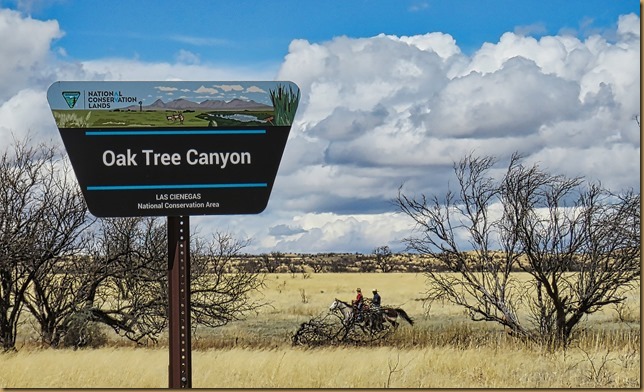 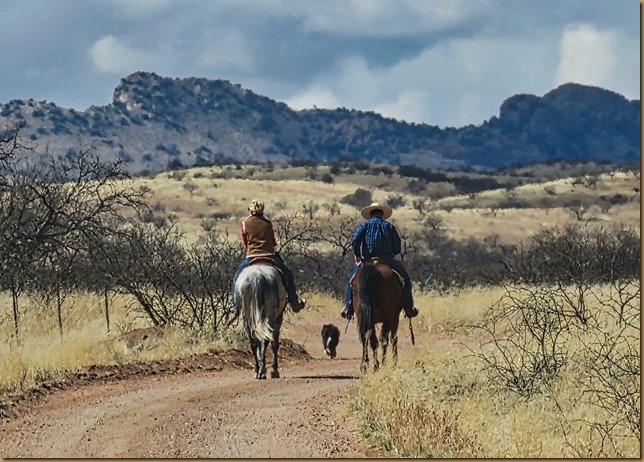 There’s the horse camp east of my camp.

The Whetstones behind the horse camp.

The Mustangs to the south of the Whetstones. 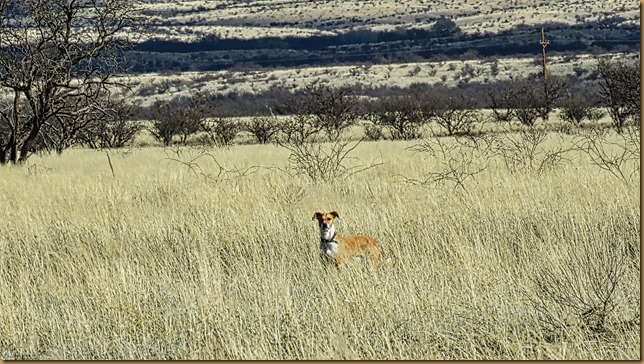 My camp on the hilltop.  Just beautiful here.  Not a soul within a mile of us.  Looking forward to a fun time here.

Stepped out to take a picture of the last rays of the sun.  It is so quiet and peaceful out here. 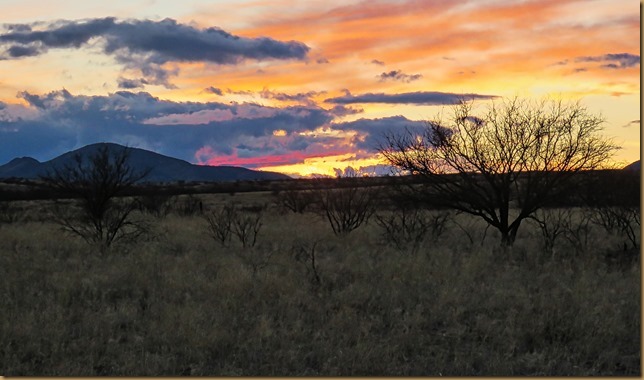