Hiked a portion of the Dutchman’s Trail

This morning on our walk, I noticed that my Phainopepia had a lady friend on his tree.  Before I could get any closer, she took off.  When I peeked over the berm again this morning I saw a lonesome cactus in the open mining pit.  They evidently had dug around the cactus and left it standing.  Nice of them. 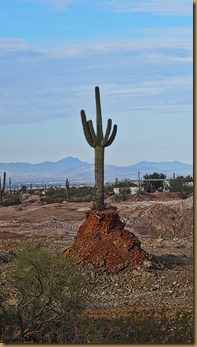 After breakfast around 10 o’clock, Deb and Riley headed out on a hike near the big boulder we had hiked around the other day. 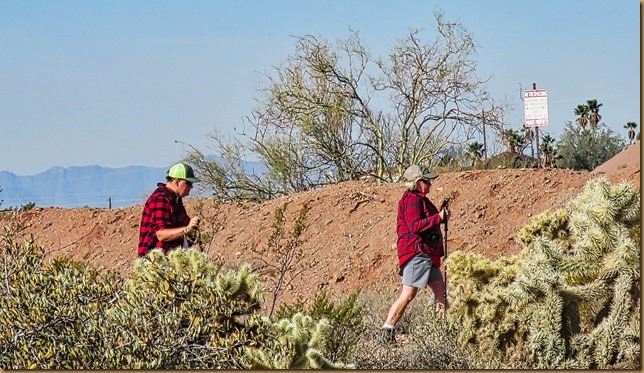 I had plans to take a shorter hike over near where we had hiked the other day just past the Dutchman’s State Park.  The trail was named First Water Trail.  Got to the trailhead just about 11 o’clock and there were two rangers at the gate.

When I was signing in, one of the rangers was giving the ladies on the horses the rule of the hiking trail.  Guess they were from out of state because one of them mentioned the rules in Colorado were different.  They left ahead of me and I never saw them again. 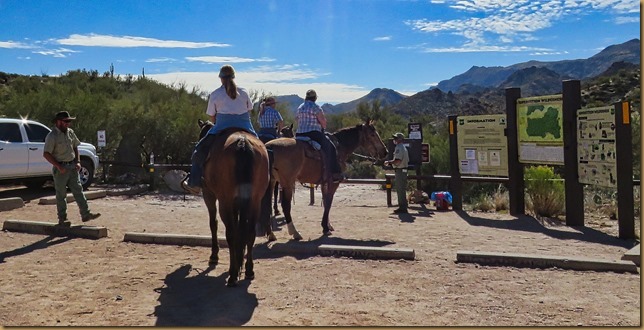 The weather is perfect.  A little warm.  Going to be around the 80 degree mark, but I like it warm.  Doesn’t usually bother me  too much as long as there is a breeze and a little shade here and there.  I had no idea where this trail went so I asked the ranger.  He said there are two trails and they split off about a quarter of mile into the trail.  One was Second Water Creek trail and the other was the Dutchman’s Trail.  Both trails were long and my plan was to hike one of them for no more than two miles and return.

The trail was well worn and very easy.  Other than the split, there were no other trails except the one you’re on, so at least I couldn’t get lost.  Yuma stayed on leash the whole hike.  Warm enough for rattlesnakes today for sure. 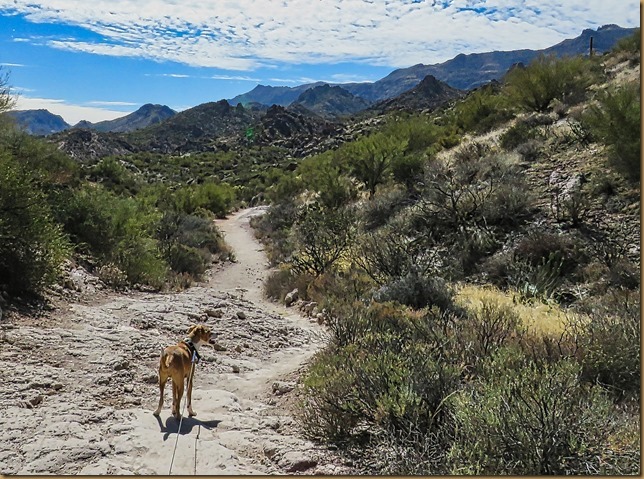 The mountains ahead look gorgeous.  At the split I decided to take the upper trail, Dutchman’s trail.  It headed off towards the south side of the Superstition Mountains.

For a short time I could see the peaks of the Superstition Mountain, but soon I was lost in the mountains on the backside. 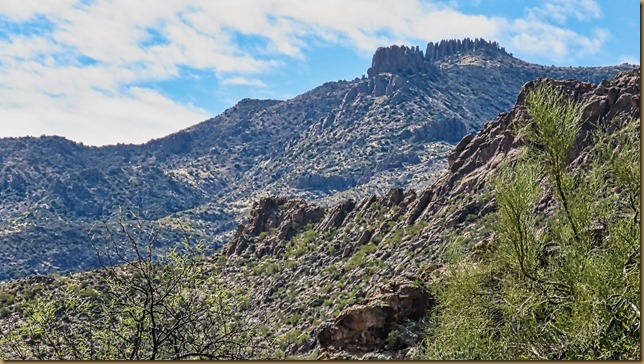 The trail followed a wash.  I went up and down either side probably about four time during the hike. 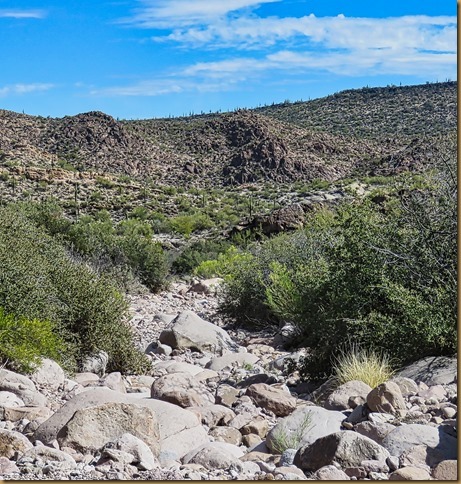 The trail was well worn and easy to follow.  If I was a young fellow, I could follow this trail through the mountains for hundreds of miles. 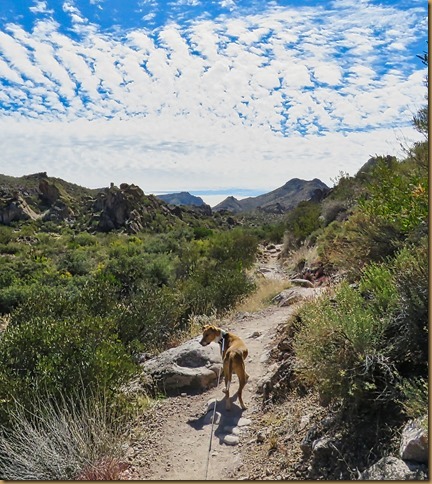 The ridges above me were very old and looked worn by the winds. 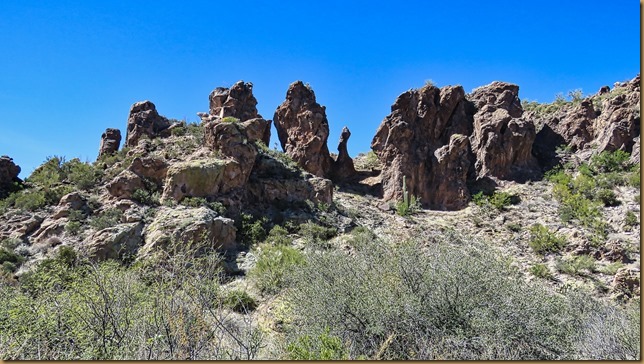 I could see this pointed mountain way up ahead, so I asked one of the hikers I passed what it was.  They said it was Weaver’s Needle and there was a great view of it a few miles ahead.  Now, I’m starting to have a goal of something that is just over the next hill.  Not good!

The trail is good, but there are plenty of rocks and boulders to watch for.  And a few ledges that need your attention. 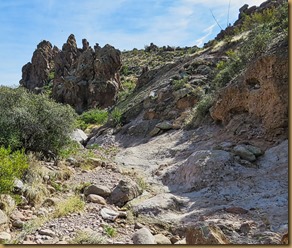 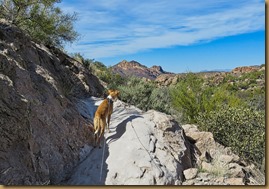 I decided my goal was to get to the overlook, but by this time I had hiked about a mile and two more was going to tax me.  Because, whatever I hike one way, I have to come back the other way.  No taxi at the end of the trail.  I felt pretty good, because Deb (On a long and lonesome highway…. ) had loaned me an elastic wrap and I had wrapped it around my bad ankle.  Felt pretty good so far.

I can see the tip of it now, taunting me.  I’m sure it is just over that next ridge. 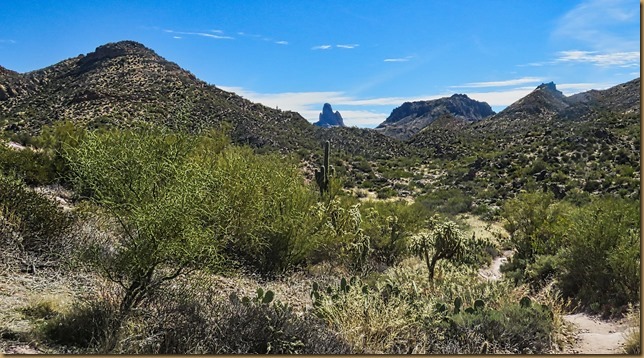 As I hike there is beauty all around. 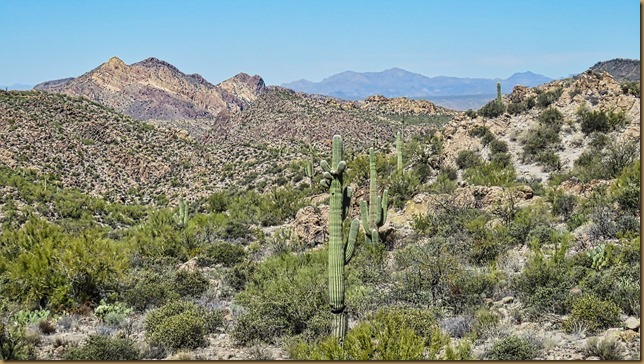 Of course when I get to the ridge, the Needle is still partially hidden from view and the trail goes on like forever.  But it looks like the next ridge will reveal the Needle to the zoom on my camera, so off Yuma and I go.

The mountains around me are so rugged.  Thank goodness for this well worn trail. 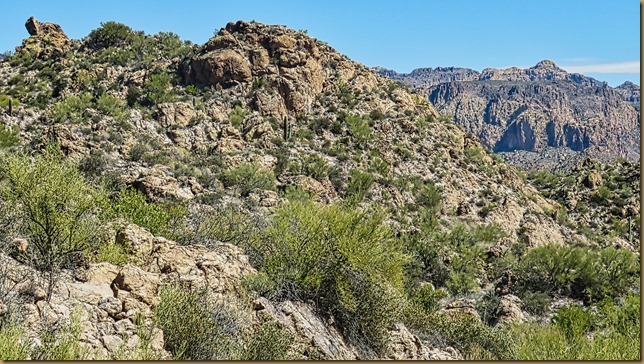 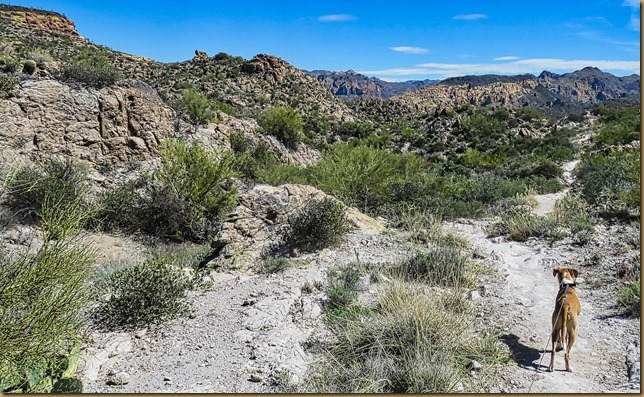 It’s getting closer.  Just a little more around the bend ahead and I’ll get my shot and we can go home.  Yuma’s not so sure. 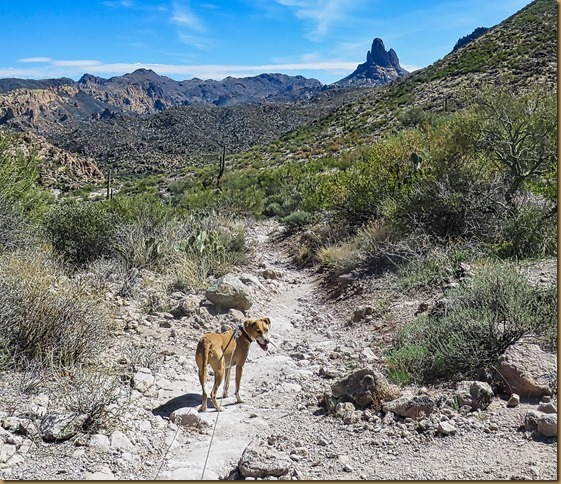 Just a little further up I agree with Yuma.  This is as close as I get.  According to my Fitbit, I’m nearly 3 1/2 miles in and dare not go any further.  I can see there are more ridges for at least another two miles.

It does look majestic. 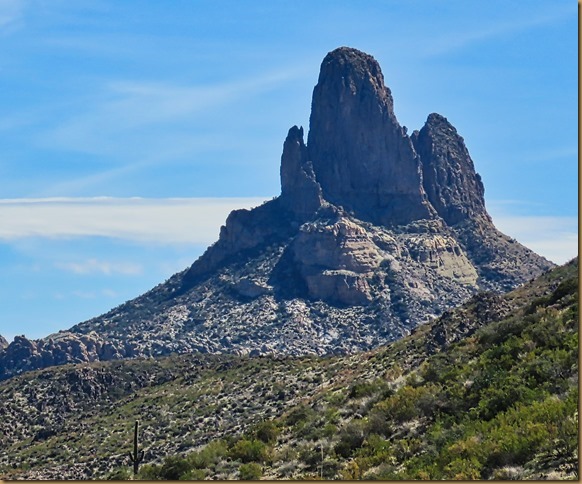 Proof Yuma and I were there. 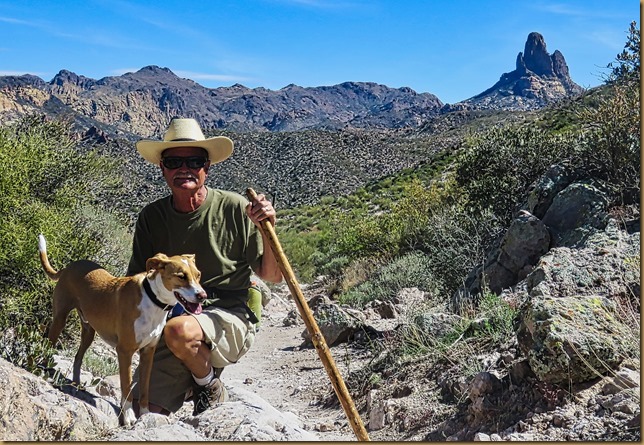 On the way back down the trail, Yuma met a friend.  He had just waded in a pool of water a little further back on the trail. 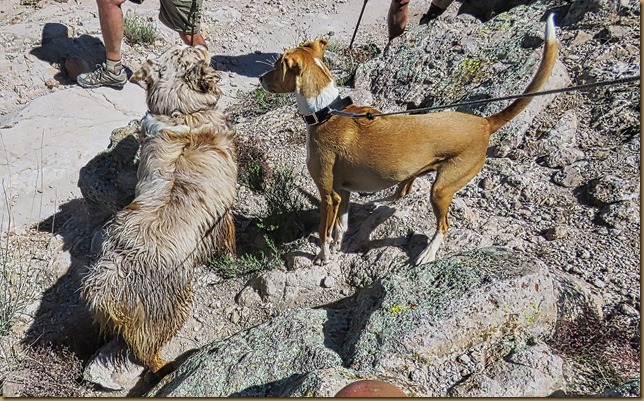 As I look back the way I came, I feel a little defeated.  But I know I must start walking.  No taxi stands around here.  And no cell reception either. 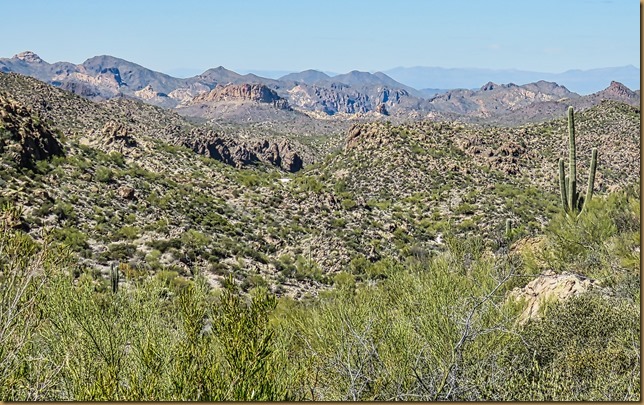 This Raven stood on top of a huge boulder high above me and laughed at me as I stumbled my way down the trail.

Maybe this hawk will get him. 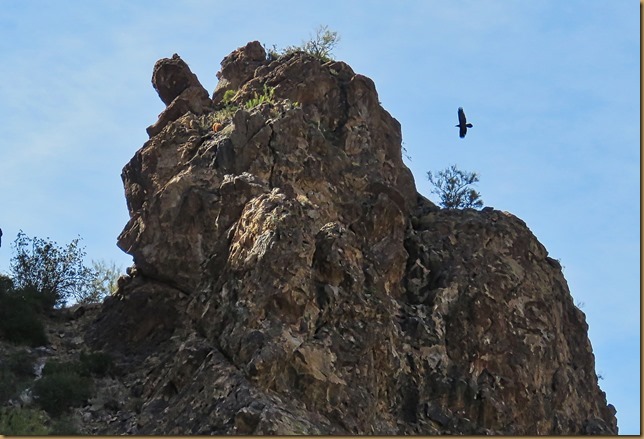 I can see the Superstition Mountain again, so the end is near. 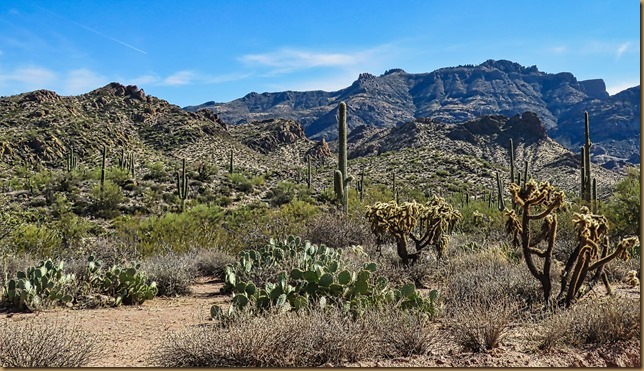 Me and that saguaro said goodbye to that taunting needle as I neared the end of the trail. 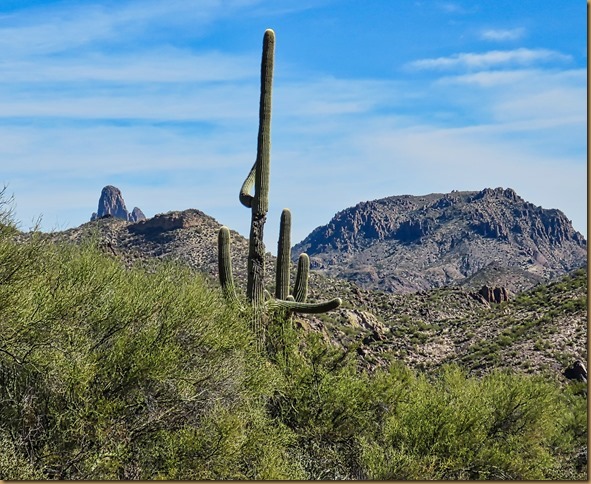 Hiked nearly 7 miles today.  Probably the longest hike I’ve ever done.  And to think I didn’t go with Deb and Riley because I thought their planned hike was too long for me and I wanted to take it easy.  They ended up around three miles which would have been perfect.

Got back to the RV and soaked my feet.  Actually, I feel pretty good.  Maybe I’ll do another long hike again.  Like never!

Time to finish my post, fix dinner and watch hours of Gold Rush tonight.  That’s more like it.