Last evening, I decided to take a bike ride to give Yuma a workout.  Started out around 4:30 so thought I had plenty of time before dark.  Went north on a dirt road that followed a gas line forever through the desert in a straight line.  About two miles along I ran into another dirt road going southeast, so I thought it would go back to Palm Canyon Road at an angle towards the mountains.

I’ve got to stop these assumptions because the road kept angling directly towards the mountains to the east and every once awhile a little bit to the south.

I started getting concerned because the sun was sinking fast and I did not have enough time to back track.  So, I got off the bike and Yuma and I went directly south across the desert through the brush and ravines.  I knew the road was in that direction and just hoped I had enough time to walk to it before dark.

To make a long story a little shorter, we did make it to the road with about 15 minutes to spare before the sun was gone.  It would have been tough walking in complete darkness of the desert, so glad I did not have to write about that ending.

This morning after Yuma and I had our morning walk and breakfast, we took a jeep ride to Kofa Queen Canyon located about five winding miles north of Palm Canyon.

Yuma still does not like riding in the jeep.  Would not come when I called him and finally had to pick him up and put him in.  Poor guy. Hope he learns to like it or it’s going to be a long winter sitting around the motorhome.

At the Y in the road, we made the turn.  I thought the road would be similar to the one to Palm Canyon.  NOT!  I didn’t need 4-wheel drive but definitely a high clearance vehicle was required. 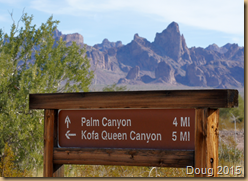 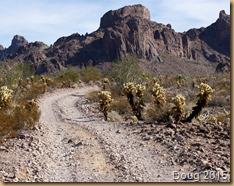 There were a number of washes along the way.

Went the five miles at about 5-10 miles an hour.  The canyon is fairly large and the mountains surrounding it rugged and beautiful.  There was a rough jeep road going into it, but because Yuma doesn’t like riding in the jeep, we walked in the noon heat instead.  I will just show the photos of the canyon. 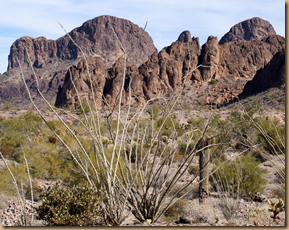 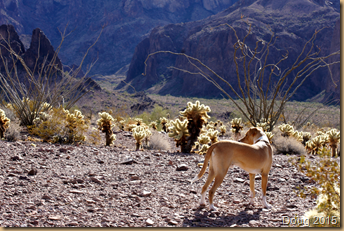 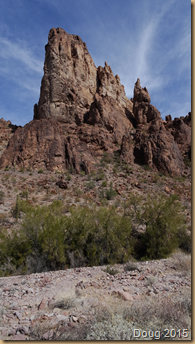 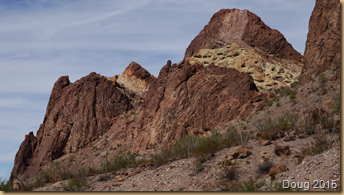 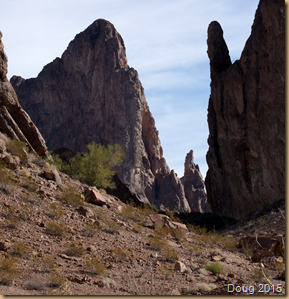 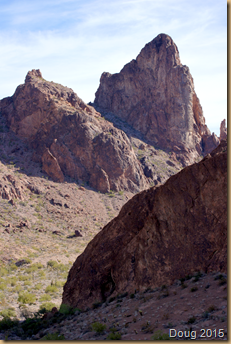 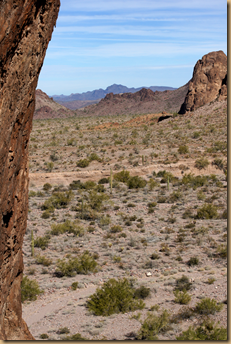 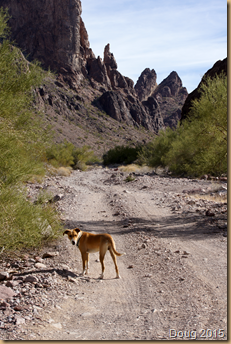 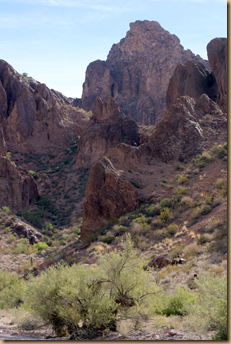 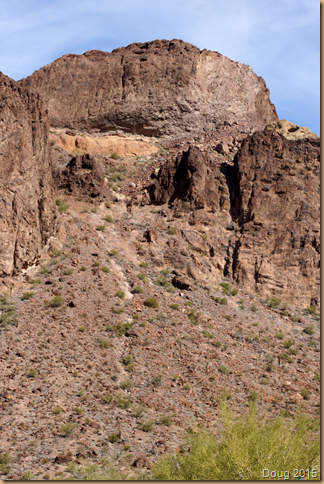 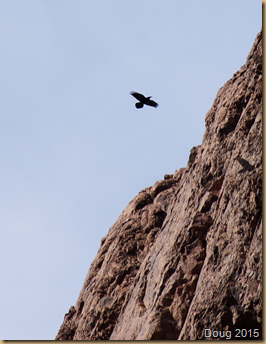 I have so many more photos but the blog is too big as it is, so maybe another day I will show more of them.

For the first mile or so into the canyon, it was very nice.  Then there were Cholla cactus everywhere.  Many of the thorny pieces were lying absolutely everywhere.  This was Yuma’s first encounter with so many and it wasn’t long before he got some on his feet.

Before I could grab him, he reached around and bit one off his leg and two thorns got imbedded in the roof of his mouth.  I wrestled with him for a good half hour before I was able to finally pull them out.  He was at least sweet enough not to bite me.  He did not like this Cholla cactus stuff one bit.   Of course I did not bring a leash with me since it was so remote, but Yuma knew enough to stay on the road on the way out. 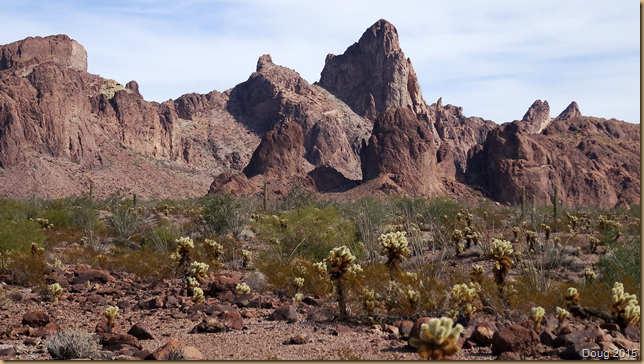 Got back to camp about 3 pm, had some lunch and spent the rest of the day being lazy.  While I was resting, Yuma started eating on some dry bread I had thrown out for the birds.  So, I went in and got him a leather chewy bone to gnaw on.

I went inside to grab my phone and when I came out I saw Yuma over by a creosote bush and he was pushing the dirt with his feet and nose.  Walked over and that darn dog had pushed the bone into a critter hole and buried it.  What a nut.  If I hadn’t seen him do it, that bone may have been hidden forever.  I’m beginning to wonder if he is smarter than me.  You can see how he stuffed it head first into the hole and threw rocks and dirt on it. 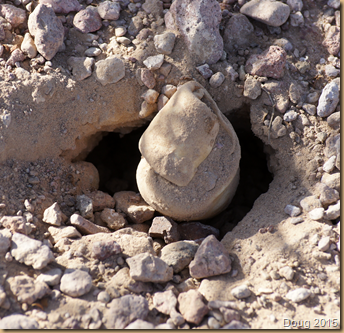 Oh, another thing happened yesterday that I didn’t think at the time had much significance.  As Yuma and I were laying outside soaking up the sun, I could hear a big diesel engine coming from hwy 95 onto Palm Canyon Road.  I listened as it came closer and then I could see the huge silver and green vintage Wanderlodge motorhome with a kayak on top, towing a car with a bike on top of it.

It stopped and someone got out and ran up the gas pipeline road to the north.  I knew there was a big wash just up that road, so Yuma and I walked up and asked the fellow if he was looking for a place to park that humongous thing.   Sure enough, he was.

I told him there was a very nice big area just south of my place they could take a look at.  We walked down to the area and I guess they liked it.  Before long I had new neighbors.  I’m not much of a neighborly guy, but I do like Wanderlodge motorhomes, so they couldn’t be all bad.

Then this afternoon, me and Yuma were getting ready for another bike ride and the car minus the bike on top, pulled in and the fellow stopped to thank me for pointing out their new home.  We got to talking and I mentioned I write a blog of my journeys through the southwest.  He said he wrote a blog named WANDERTOPIA and asked if I had heard of Technomadia  and Wheeling It.  I was shocked.  I follow both of those regularly, so I asked if he knew The Bayfield Bunch and RV-Dreams Journal and of course he did.

We introduced ourselves.  His name is Todd and his business partner is Russ.  They are from Atlanta, Georgia and travel and work on the road in their Wanderlodge motorhome.  What a great life if you can make it work.

It sure is a small world out here in blog land.