This morning, we ran up the hill at Senator Wash to the LTVA to get some propane and then into Yuma to fill up the motorhome.  Gas is 50 cents a gallon more expensive in California.

We then touched the edge of the Imperial Sand Dunes while on I-8 heading toward Brawley, California, sixty miles west of Yuma, Arizona.  The winds were coming out of the north blowing sand across the highway. 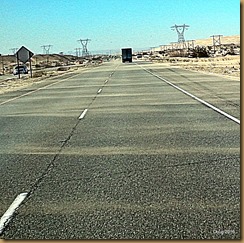 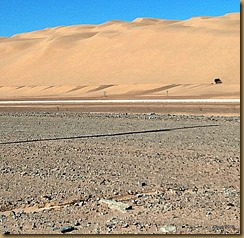 We stopped to get groceries at the Walmart in Brawley.  We then followed hwy 86 north for a short while till we turned left on hwy 78 toward Octillo Wells on our way to Borrego Springs.  When we turned off the highway heading towards Borrego Springs, the first wash we hit was the monster 9 percent grade named the Texas Dip.  Wouldn’t want to drive through that when it is raining. 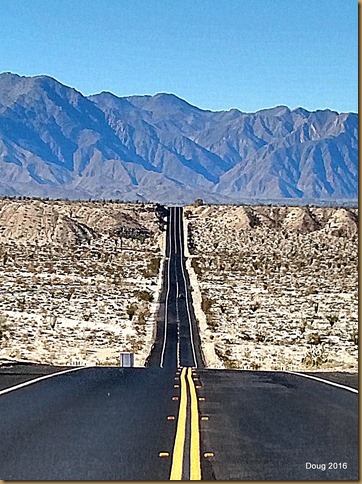 We have been wanting warmer weather, and now we have it.  When we arrived at our desert home outside Borrego Springs around 4 P.M., the temperature was 85 and not a whisper of a breeze.

All I did was unhook the jeep and drive around looking for a more private camp than the one I stopped in.  Unfortunately, there weren’t any I could find.  There were signs everywhere telling me foot traffic only.  There are a lot of RVs parked along Rockhouse Trail and I found a place that is apart from the others, but not as far as I would prefer.

When the sun set, the temperature dropped to a comfortable level.  It will be a great night for sleeping.