This morning, after breakfast, I decided to take Yuma and travel about 10 miles east on S22 toward the Salton Sea to a slot canyon.  This canyon is located in an area known as the Badlands because of the rough terrain and many canyons.

Once I arrived to the cut-off to the canyon, I put the jeep in four-wheel drive to get down the steep decline to the canyon floor and then drove through a wash for about half mile to the entrance.  At this point, the wash is so narrow, the jeep could go no further.

The first rock formation I encountered when entering is an overhead rock column. 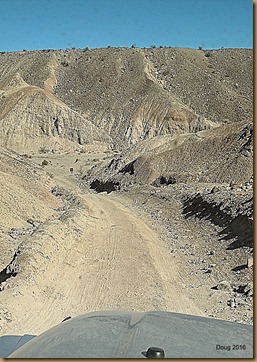 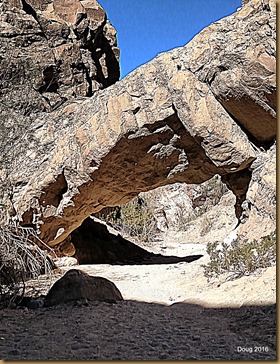 From here, Yuma and I walked about two miles through the narrowing slot.  I will let the photos talk from here. 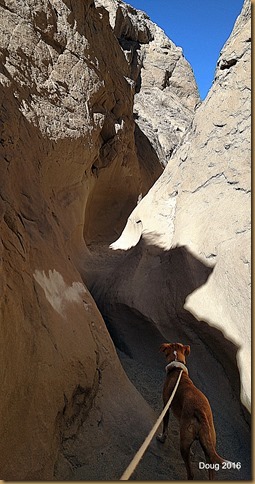 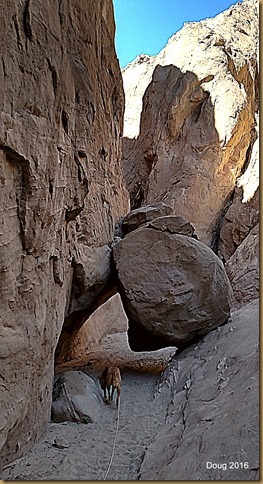 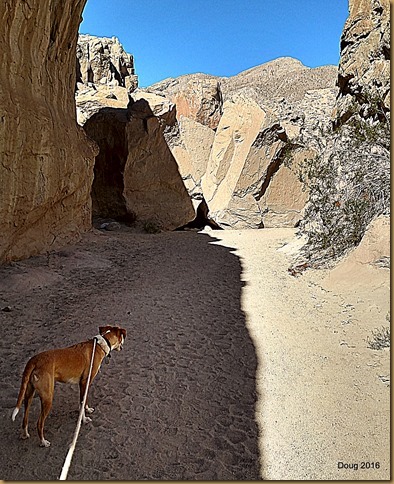 I kept Yuma on a rope most of the time, because I was afraid we would round a corner and run right into someone coming the other way.  We never saw anyone, so I let him loose.  He just loved going through the canyon,  He would run ahead and look in every cranny like a small child.  He finally ran himself tired.

Finally, the canyon ceiling got lower until we pretty much walked our way to the end of it.  At this point it opened back to a regular canyon that went on for many miles I’m sure. 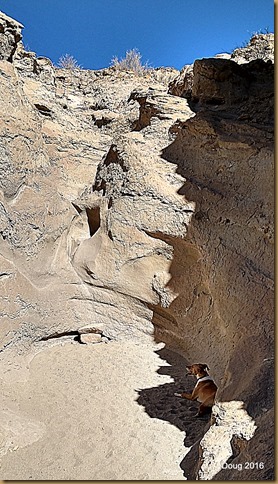 This is a very nice slot canyon that has about everything to keep one interested as they travel through.

After we left the canyon, there was a jeep road that was the original road into Borrego Srings built in the 1920’s.  The sign at the entrance said it was a 30 mile dirt road that recommended four-wheel drive.  If someone without four-wheel drive tried this road, they would be in for a big shock.

I decided to drive for a few miles and was I ever surprised.  About a mile in, I rounded a curve heading downhill and the worst jeep road I have ever encountered was right in front of me.  It was too late to back up, so I went down.

At the bottom, I was in a canyon wash with walls all around.  At this point I was tired and did not want to chance running into a worse hill or find myself lost in the Badlands, since I had no map of the area.

Here is a photo as I went back up that canyon wall.  The road had loose rocks and loose dirt and my wheels would slip as i went up.  Near the top, it was very steep with large loose rocks. 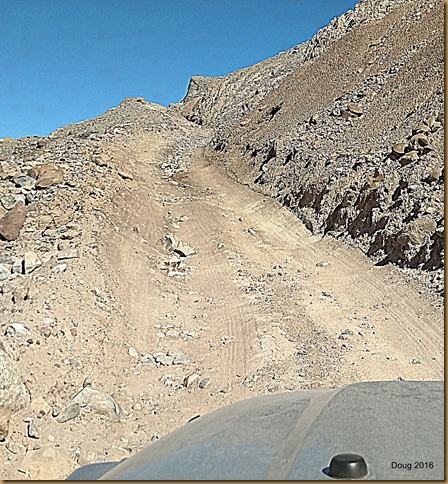 There are times when it is prudent to not venture on alone.  This road through the Badlands should be done with a partner in another jeep in case of trouble.

Enough adventures for one day.  See you later..