Yuma woke up and walked on top of me to look out the back window at 3 a.m. this morning.  When I looked out I could see the half moon peeking through the clouds. 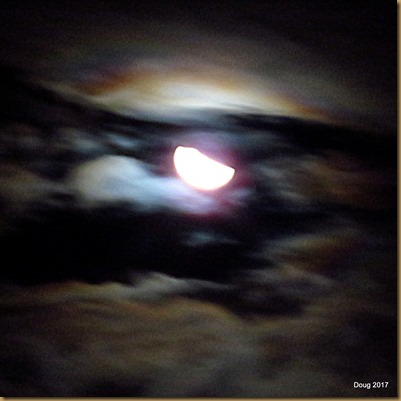 When I awoke this morning, there was a fog hanging over the mountains and it was damp, but I could tell it was going to burn off and be a beautiful day. 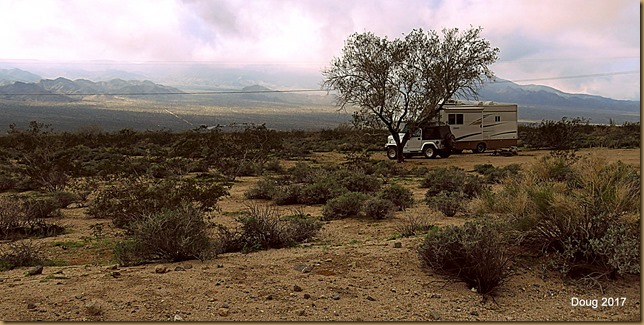 We had bacon and scrambled eggs with grapefruit and orange juice for breakfast this morning.  Topped off with an XL breakfast nut bar.

We then hopped in the Jeep and headed out to explore.  We followed the Colorado River Aqueduct maintenance road East along the edge of the Eagle Mountains for about twelve miles. 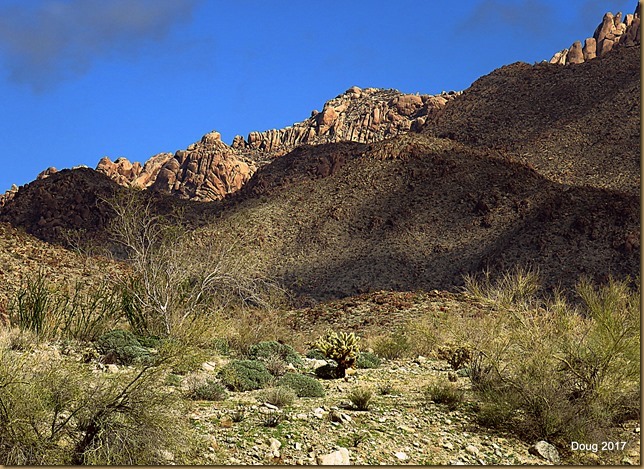 Then went up into a canyon.  The whole canyon was full of Cholla Cactus, Barrel Cactus and Brittle Bush.  It was like going into a different world. 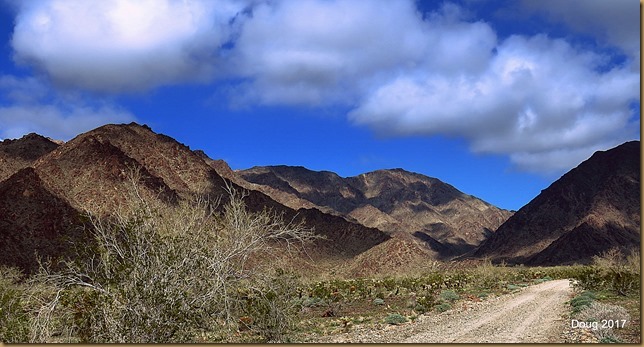 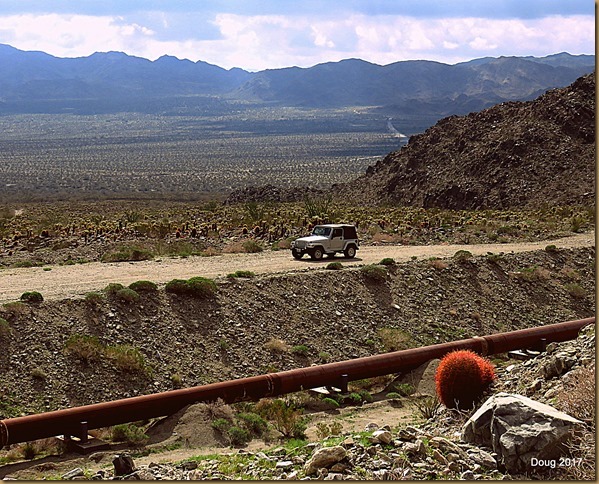 The Colorado River Aqueduct comes along these mountains.  The pipeline originates at Lake Havasu and provides water for the Los Angles and Southern California area.  This is just one of the smaller feeder pipes.  Not sure if it is even being used. 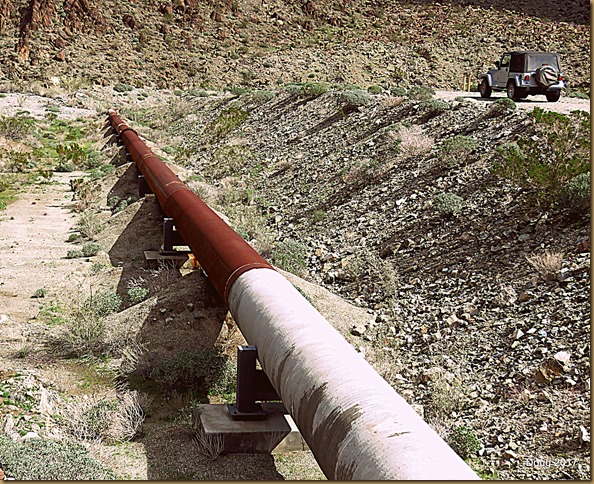 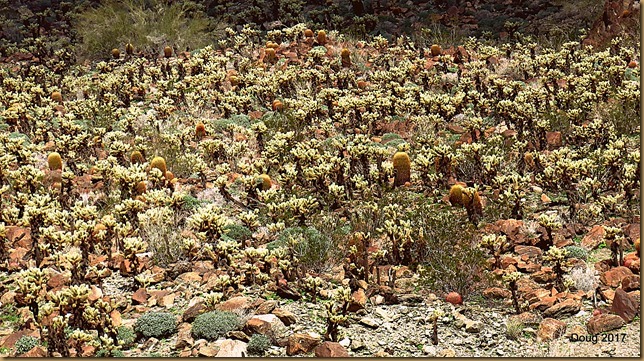 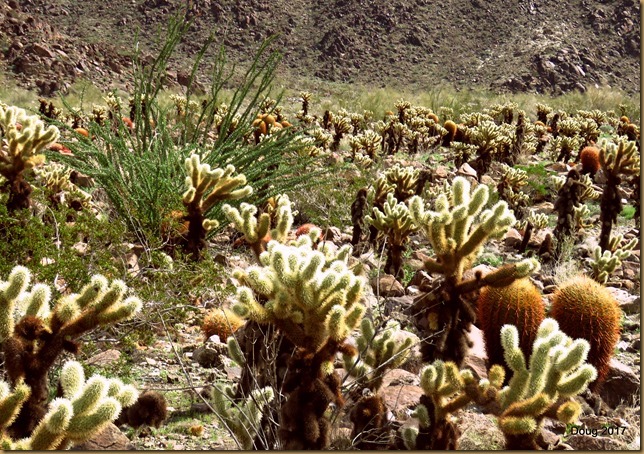 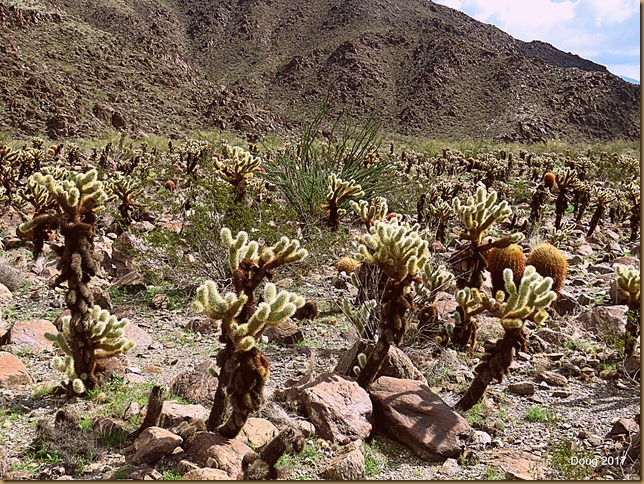 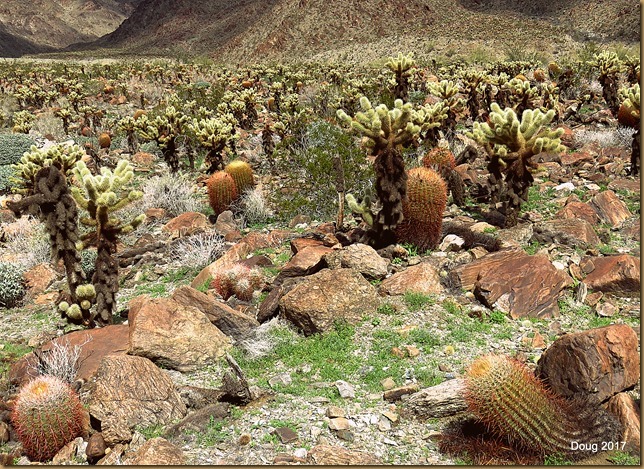 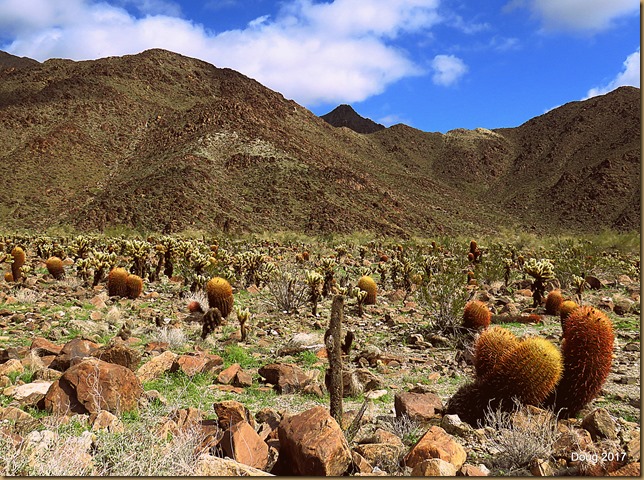 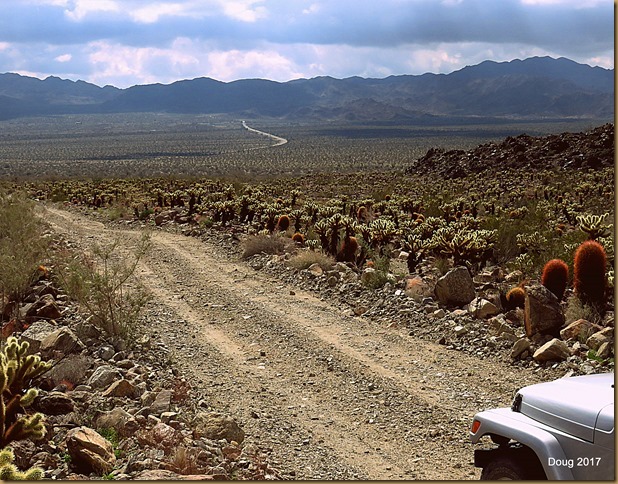 Looking East through the Chuckwalla Valley and the Colorado Desert. 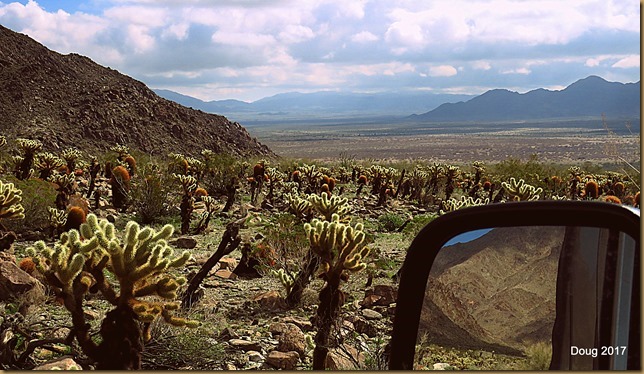 Looking West towards Coachella Valley and the Salton Sea. 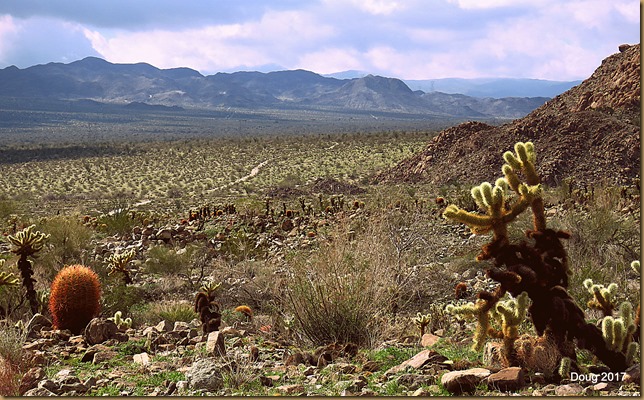 Made it back to camp in the early afternoon and rested for awhile.  We were just walking around the area and a Mercedes Van pulled into the campsite that Yuma’s girlfriend, Jodie was staying until this morning.

The gentleman got out of the van and Yuma just had to run over and meet him.  As I walked up, he asked if that camp was a good one to stay in and was it too close to mine.  I said, someone had just left that site this morning and it was a perfect place for them.

He then said, “By the way, we follow your blog.”  I was shocked.  Turns out they had just been visiting with their friends and mine, Al and Kelly of the Bayfield Bunch on Ogilby Road near Yuma.

They introduced themselves as Gord and Cathie from Ontario.  After leaving the Yuma area, they headed this way.  This is their first year at boondocking and Gord said he learned a lot from reading my blog.  I am glad that my blog is able to help make it easier for others wanting to give it a try. 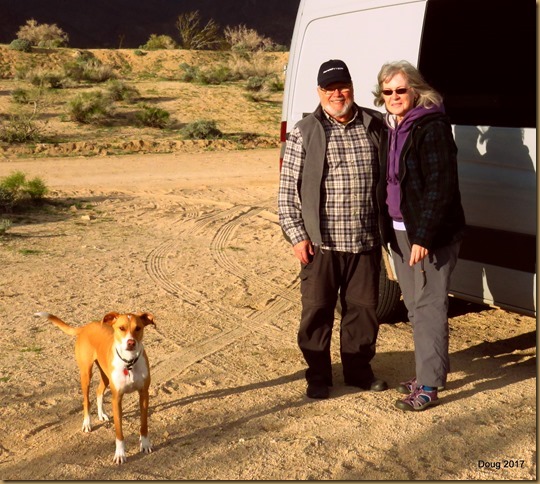 They have a busy agenda.  They are wanting to start their travels through the Joshua Tree NP tomorrow and hope to snag a site within the park to stay for at least one night.  Those are hard to grab because of their popularity.  Maybe, we will have time in the morning for a chat before they leave.

This evening, I cooked my second pork chop with a potato.  The pork chop came out great.  The potato was just a little crunchy, but not bad.  Need to cook a little longer next time.

Eric and Shaena, my friends from the stuck car episode, had read my blog about needing a potato and gave me two potatoes.   I only wanted two.  I have two pork chops and that is all I need.

Turned out to be another great day, just as I knew it would.