Stuck in the sand!

My location:  Near Southern entrance to the Joshua Tree NP

Here is last night’s moon.  The first one is the moon just rising and the headlights of travelers on I-10.  The second one is terrible, but I was amazed at the size of the crater at the top of the moon. 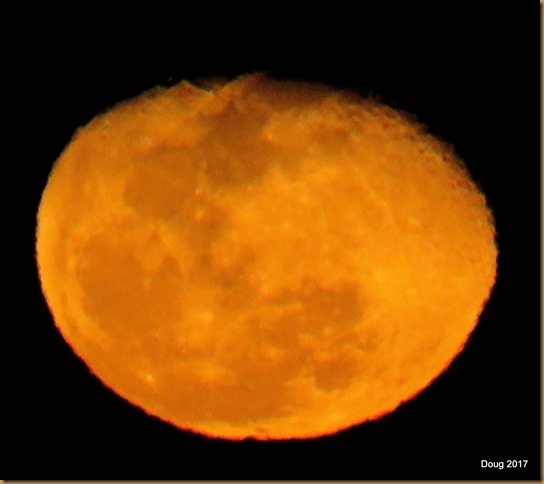 This morning is different than my past morning routines.  Last night around 7:30, I was already in bed texting Dolly and I had a knock at the door.  The moon hadn’t come up yet, so it was very dark out.

Yuma started barking and I went to the window and asked who was there.  I didn’t open the door, so we talked through the window.  Can’t be too cautious out here in the desert.

It was a man and a woman and they said their car was stuck in the sand and would I help them get it out.  I said to wait a minute while I got dressed.  They said, “No! Not tonight.  In the morning.”  We discussed times and decided around 8:30 they would come by.  It was just too strange, so I never opened the door.  They left.

Well, this morning, no coffee, no blog reading.  I ate cold cereal and took Yuma for a walk.  Of course, if there is a dog around, Yuma has a friend.  Sure enough, a lady was walking down the sandy road walking her dog.   Two alpha males checking each other out.  They got along great! 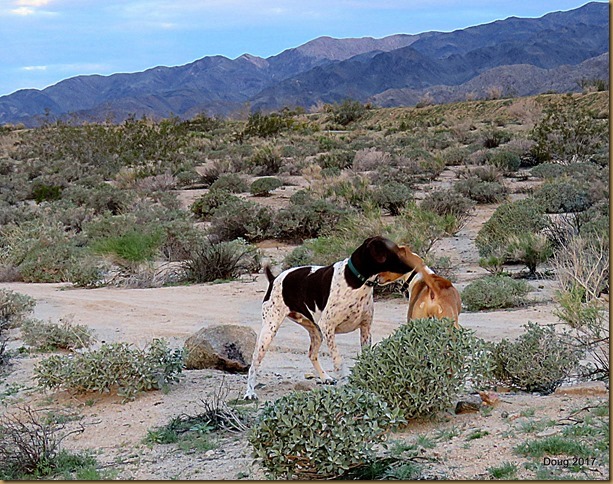 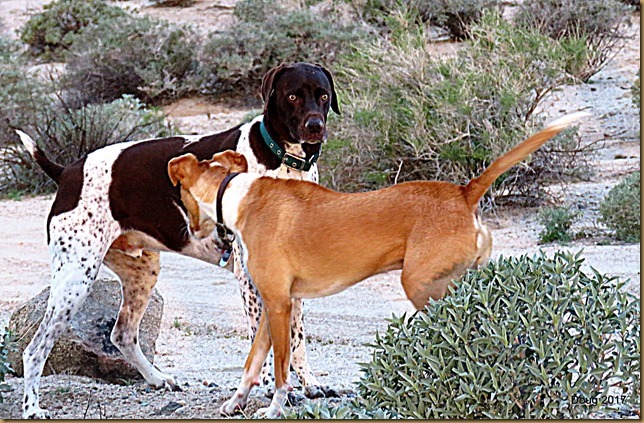 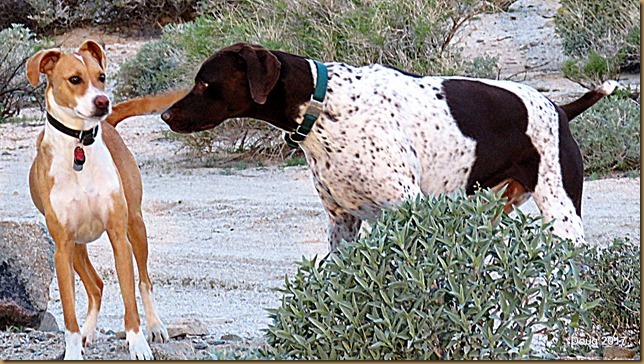 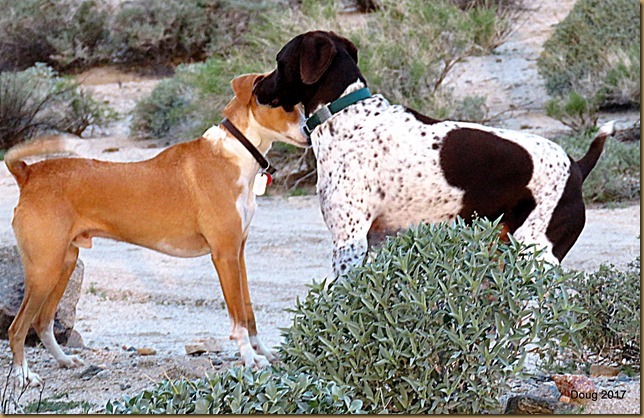 Now things get weird again.  I waited till 8:30 and no one came by.  I felt bad for not opening the door and talking to them, so I thought about where they would have gotten stuck and decided it had to be in Box Canyon.  That place is full of sand if you get off the roadway.

I remembered them saying the car was about 10 miles away.  I still couldn’t understand how their car could get stuck ten miles from my MH and they would show up on my doorstep 7:30 at night.  Oh well.

I decided I would drive ten miles up Box Canyon and see if I could find a stuck car along the road.  Off we went and sure enough, almost ten miles in I spotted a small white car stuck in the sand against the canyon wall.

It was very sandy and I had to put my Jeep into four wheel drive to get to their car.  No one was around, but the car was definitely stuck in the sand. 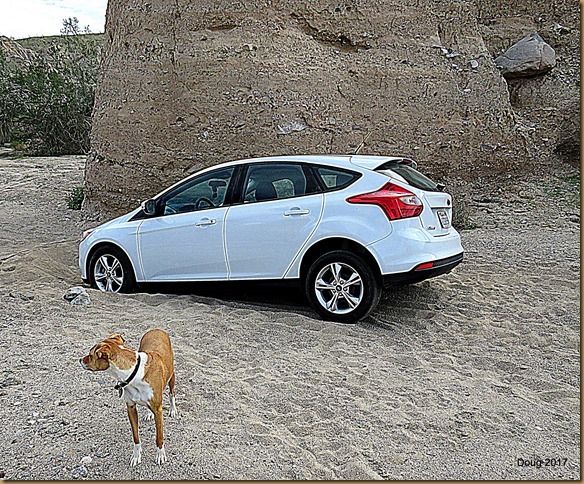 It was a small front wheel drive car not designed to drive in sand. 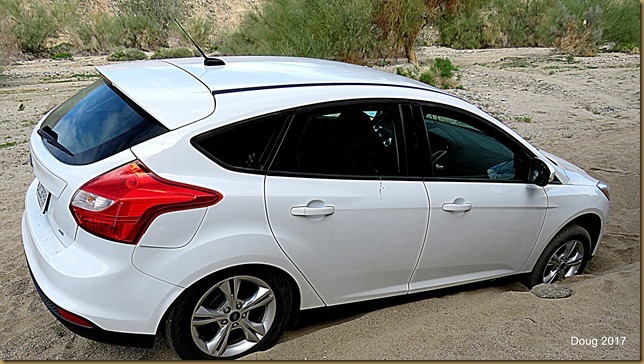 Decided to go back up to the road and wait.  Someone would come along to claim this car.  Sure enough, it wasn’t ten minutes before a MH and a big four wheel drive dually truck came up and stopped. 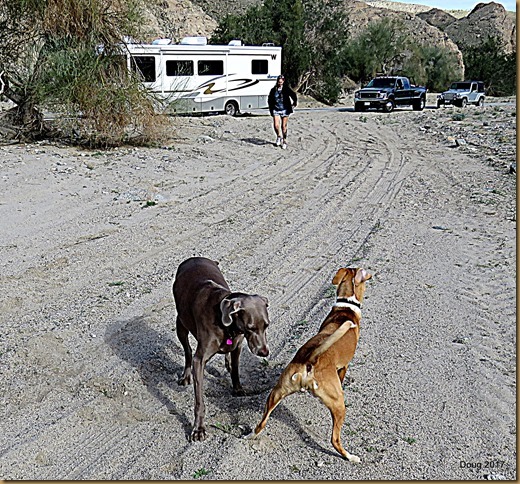 Finally, the whole story is revealed.  The man and woman in the MH were parked about a mile up the road from my MH and they had seen my Jeep earlier in the day.  So, when they got stuck in the canyon, it was late afternoon and they could not get the car out, so they hitch-hiked back to their MH and then came down to ask for help for the next morning, thinking my Jeep could pull them out.

The big man in the big truck, took one look at the sand and said he couldn’t risk driving it in there.  I knew I could in the lighter Jeep, but I also knew, that with the big man, the younger big man that owned the car and with me helping, we could manhandle that little car out of that sandy hole.

I had brought along an eight foot runner carpet I had found the other day and I cut it in two and placed them under the two front tires.  The lady got in the car and gunned it in reverse while the three of us pushed.  That car popped out of there in a flash.  No problem!  There’s Yuma running down into the sandy hole.

Here’s Eric, the car owner picking up the ropes that we didn’t need and throwing them in the now freed car.  He was one happy camper.  So is Yuma’s second new friend of the day, Pumpkin.

The big guy carrying his ropes back to his big truck.  Only needed two pieces of carpet to get this job done.   And, of course three big men and a lady with a hot foot! 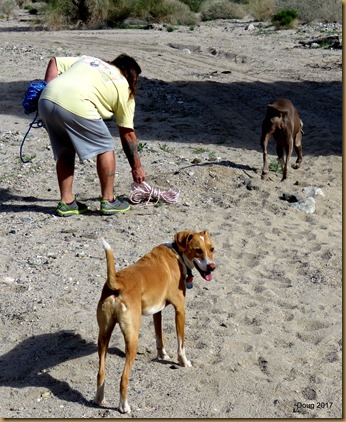 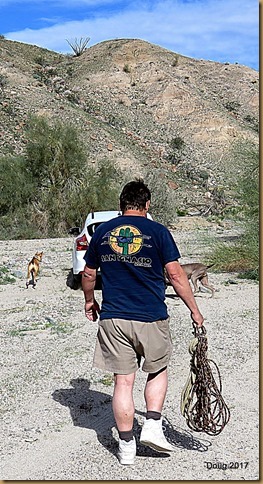 Off, she speeds heading for the safety of the hard surface.

As we were standing next to the road talking, guess who drives by.  No other than RVSue in her van towing her Casita trailer.  Not positive it was her, but I’d bet a nickel on it.  I knew she was parked over on the Salton Sea.  She also has a blog I follow named rvsue and her canine crew. 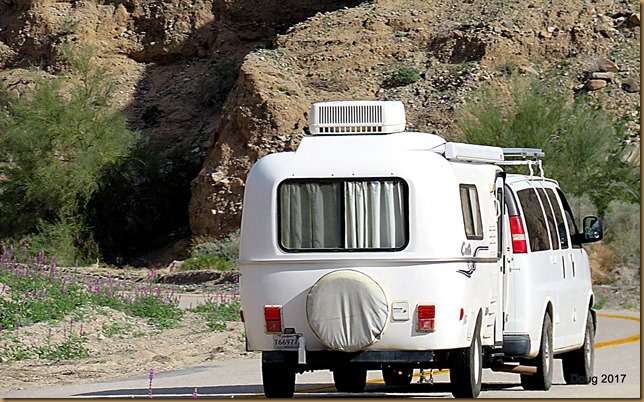 The young lady tried to hand me some money for my troubles but I wasn’t having any of it.  I was just sorry, I didn’t open the door to them last night and was glad to make up for it.

Well, I got something else out of it.  They wouldn’t take “No” for an answer, so they asked me and Yuma to come down for some rib eye steaks at their place tonight, and I agreed.  Be nice to have a steak.  Been awhile.

Here’s Yuma resting on the carpets, now that they are back home after doing such great work this morning.  I think I will keep them.  They may come in handy in the future. 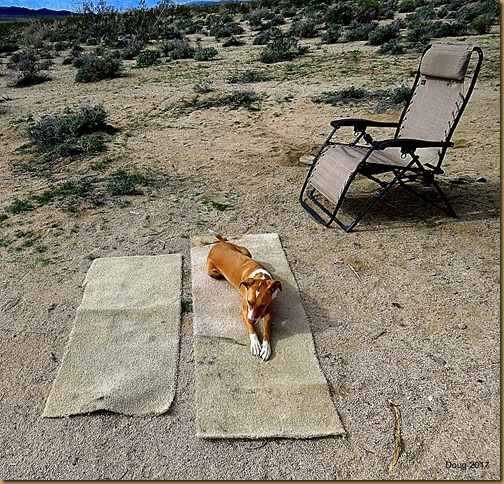 We did make a run up to the southern end of Joshua Tree NP, but I will save that for another day.  I think I’ve gabbed enough for one day. 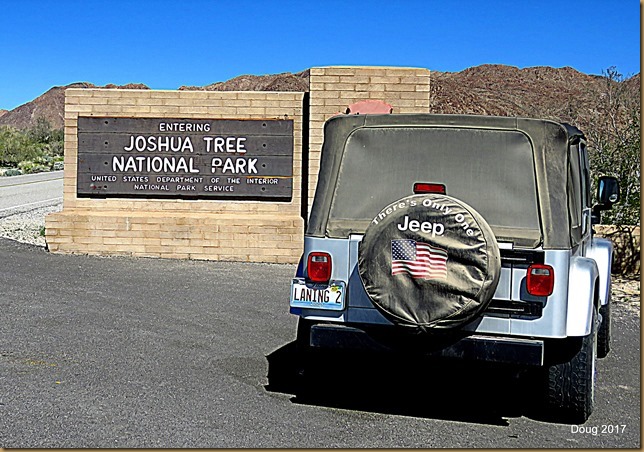 Time for some Ribeye!