My location :  Near Southern entrance to the Joshua Tree NP

The winds howled as they came down from the Northeast out of Joshua Tree NP and over the mountains.  I had to pull in the slides to keep the noise down, but the MH rocked all night long.  Everything was secured, so I slept well.

This morning, I only had one plan.  That was to give Yuma a bath.  So after all my morning usual duties we took our normal walk through the desert.

By the way, I bought some Arthritis Tylenol 650 mg capsules and they work.  I am able to walk with no pain once more.  I guess I didn’t realize how important they are for me to walk each day, especially on long hikes.

Here is a momma Barrel cactus with her three little ones. 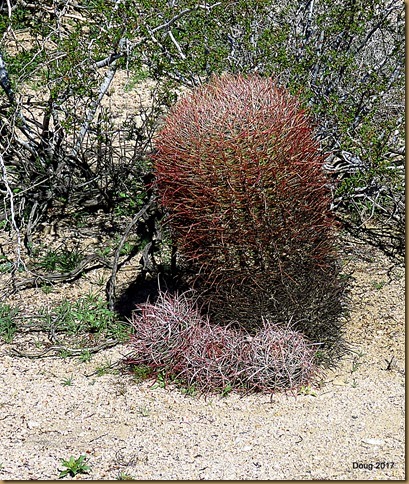 When we walk, Yuma likes to scout around making sure it is safe for me to come through. 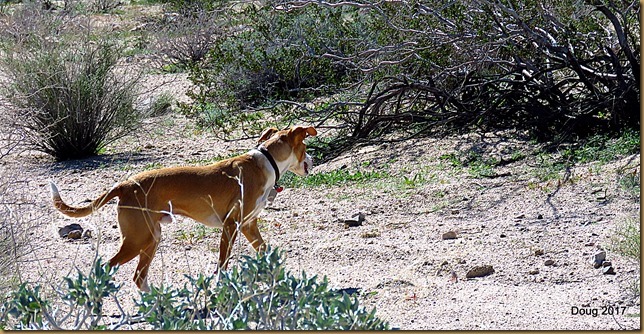 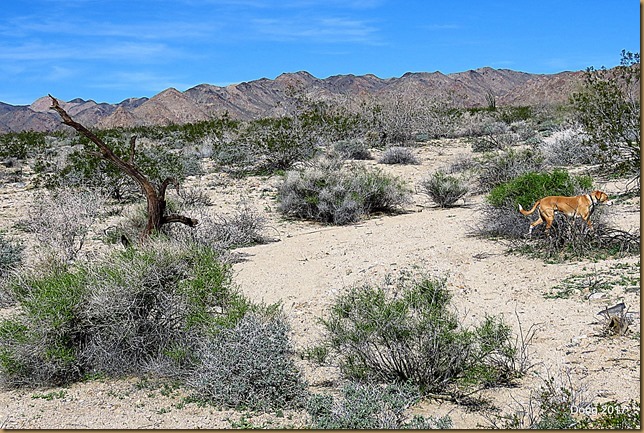 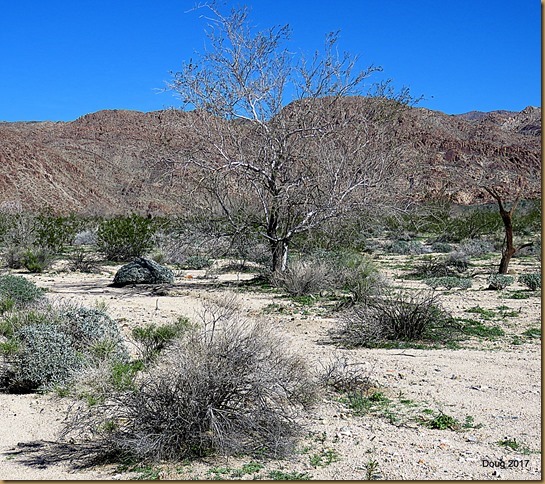 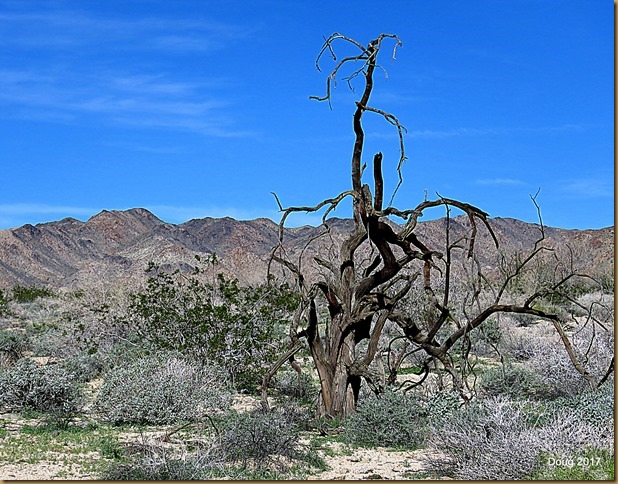 After our walk, the wind finally died down and the sun was beating on the South side of the MH, it was time.  Yuma knew it and cowered in the hallway by the bed, but did him no good.

Once Yuma was outside, he behaved like a good boy and the bath was done quickly.  Yuma ran in circles afterward to dry himself off. 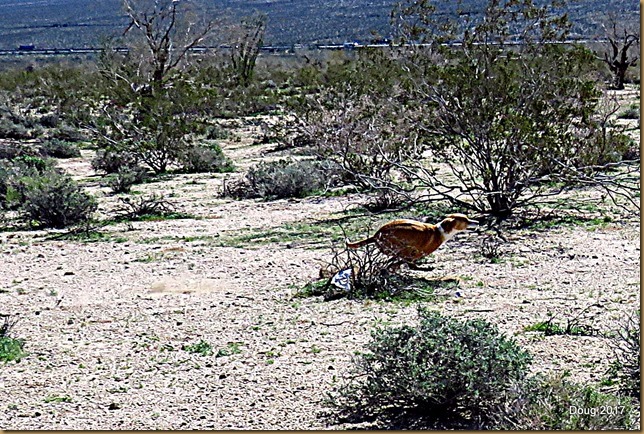 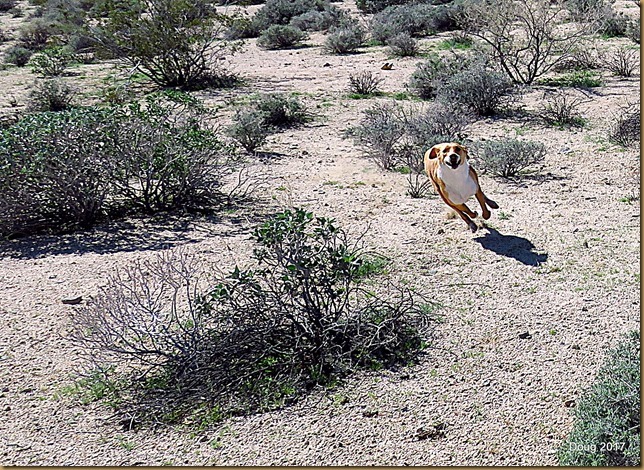 Then he plopped himself on the recliner to rest and bask in the sun. 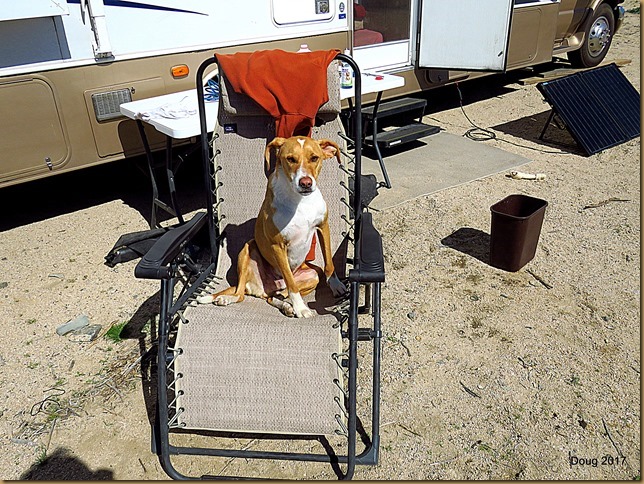 Around 11:30, we decided to drive the five miles East to Chiriaco Summit, the location of the General Patton Memorial Museum.  We took the dirt roads along the mountains to get there.  There it is ahead. 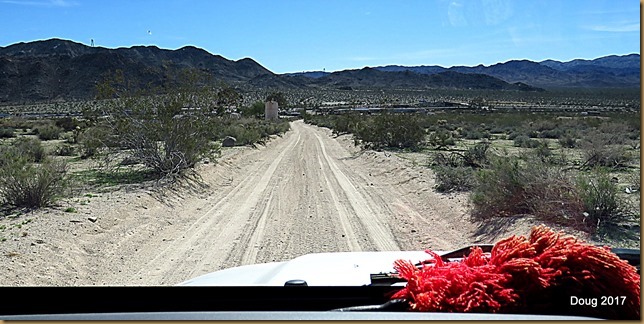 As we drove up behind the area, I could see they have a dry camp area for RVs.  I never asked if there was a fee to camp there.  There were also a number of old and broken down tanks and a deuce and a half. 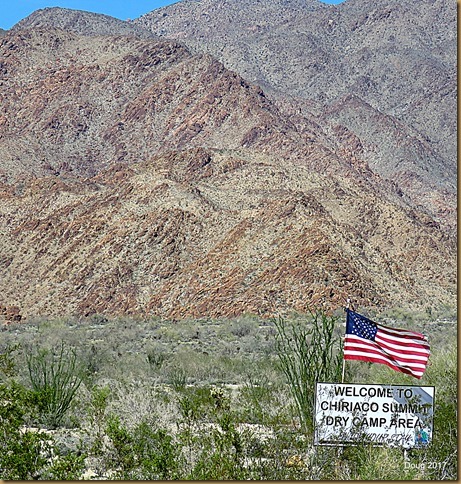 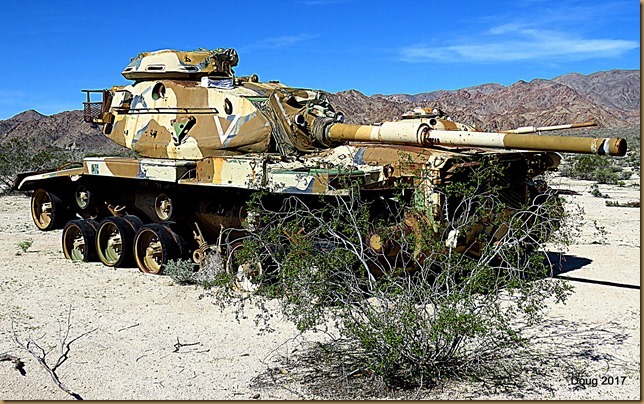 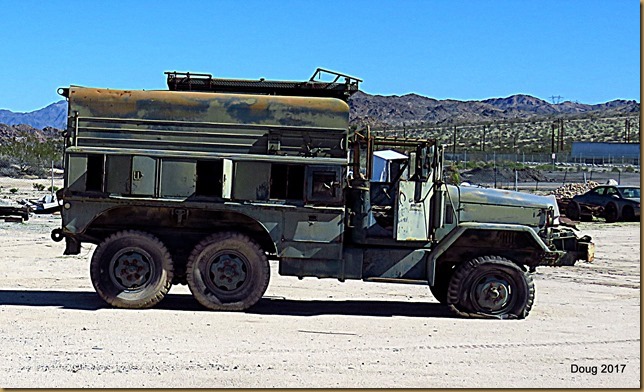 This is what the auto center area looks like.  It was busy.

Went around to the front of the museum and they have a Vietnam  Remembrance Wall. 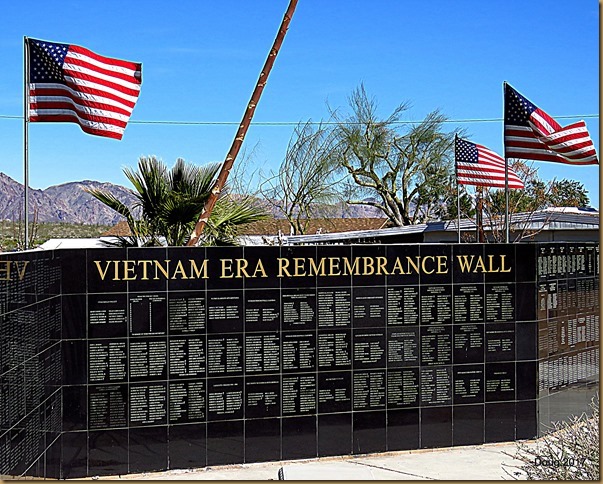 Here is the museum entrance.  I didn’t go inside because it was too warm to leave Yuma outside in the Jeep.  Here is a link from last year when Yuma stayed with Dolly while I went through the museum. 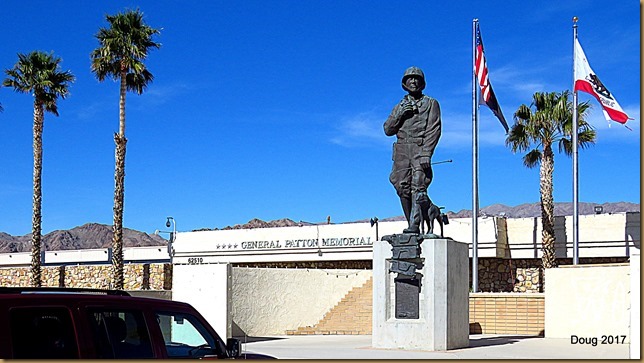 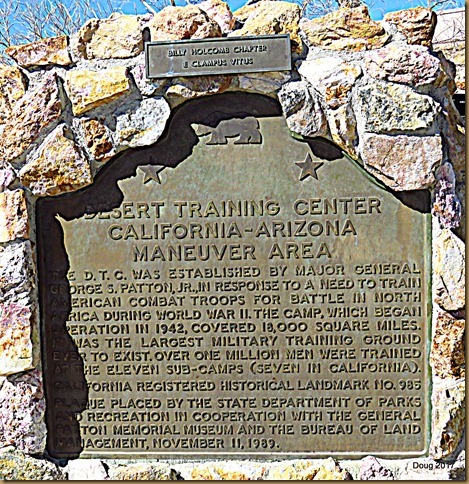 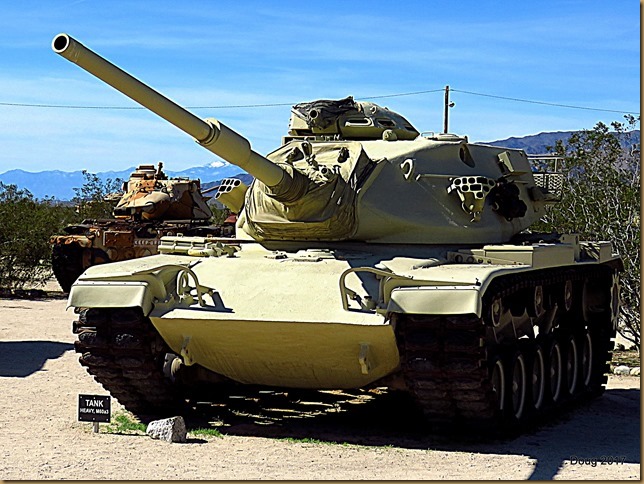 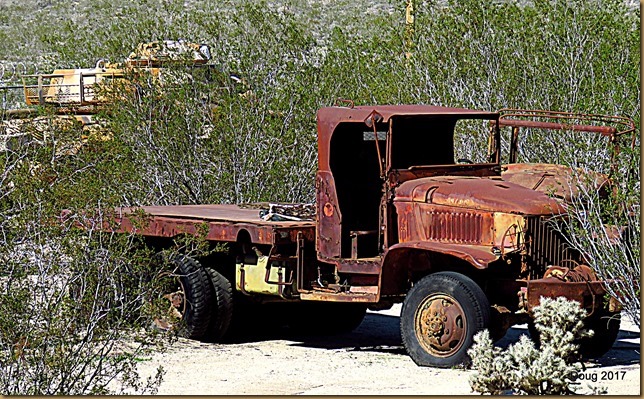 We took I-10 for the five miles back.  There is my RV in the center below the mountains.  On the other side of the mountains is the National Park. 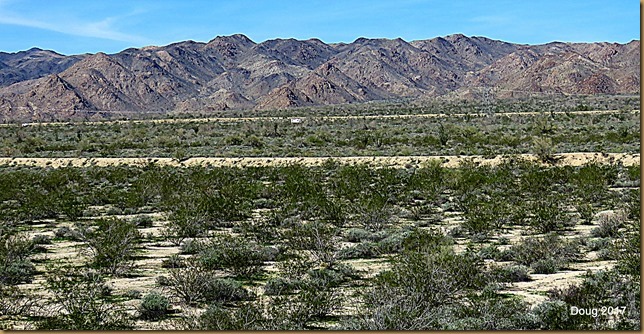 Between the interstate and my MH, Camp Young was located.  We took a drive over to the plaque and then walked around a bit. 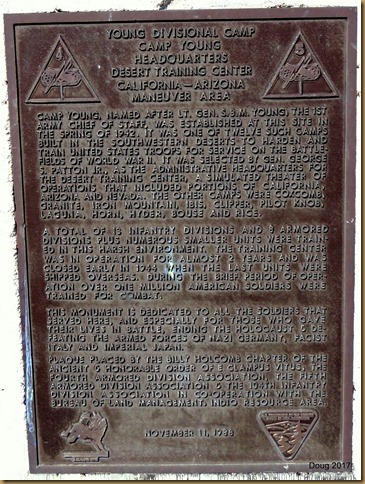 There is not much left except rocks that were used to outline the area and also many of the men would place rocks around their tent areas. 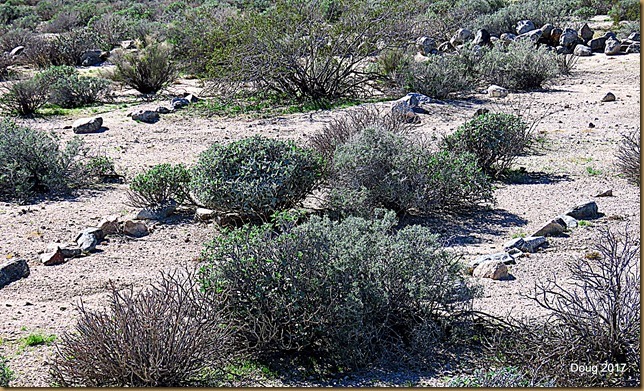 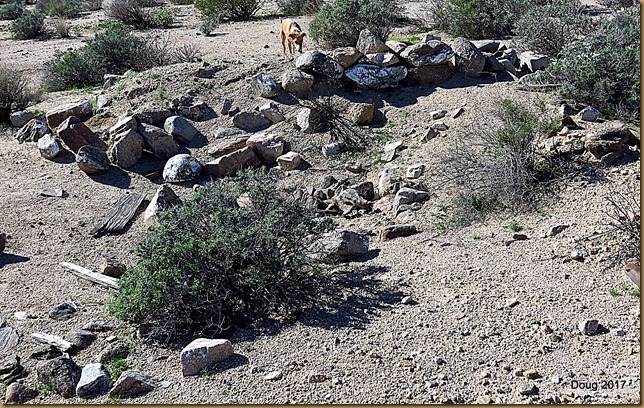 Pieces of board and lots of nails, along with the rock formations are all that is left of this once vast camp, headquarters to the desert campaign. 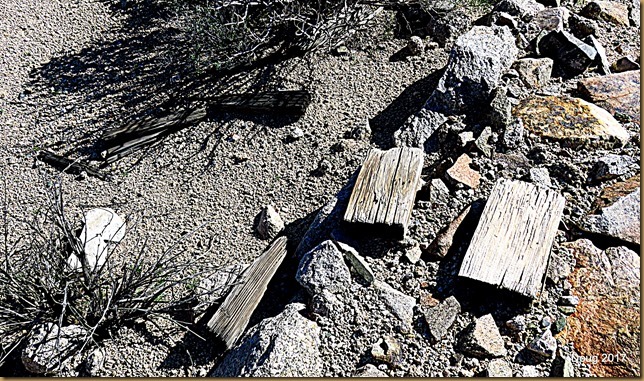 Those men saw the same desert terrain I am looking at from my MH. 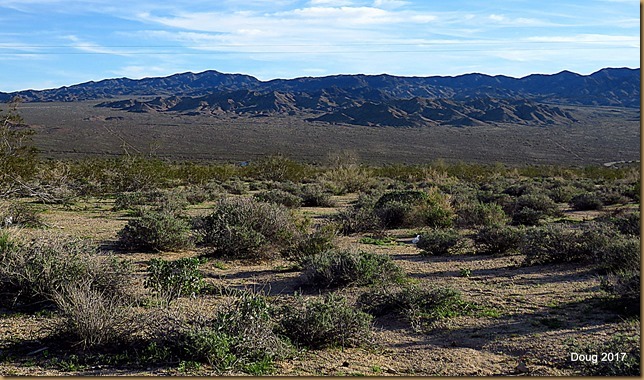 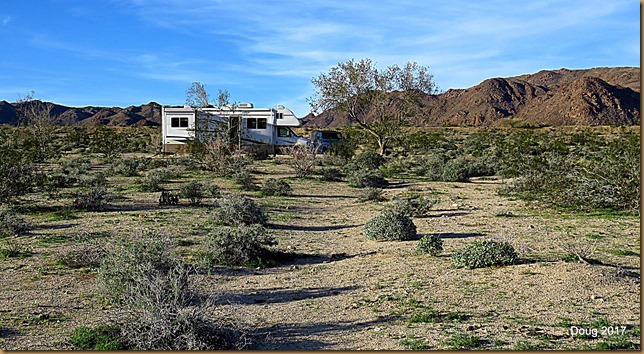