This morning, I had to do two things.  One was to wash the sand out of my hair so it doesn’t stick straight up and second, give the inside of the MH a good cleaning.  Got both done.  As you can see, I did the cleaning first.  My hair is standing on end.  Yuma just watched. 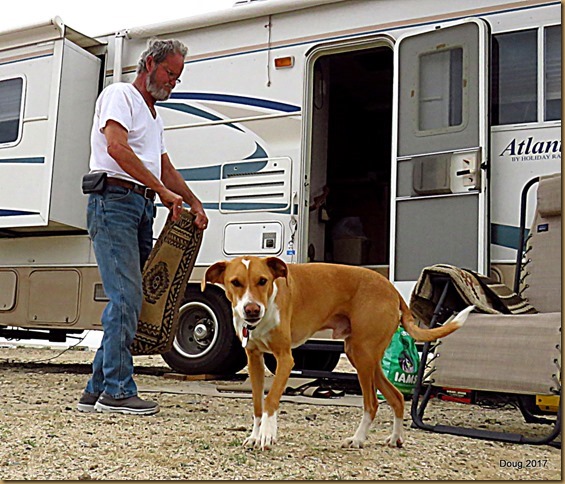 I laid around my clean home for awhile, thinking it was going to rain.  Sure looked like it and the wind was blowing pretty good too. 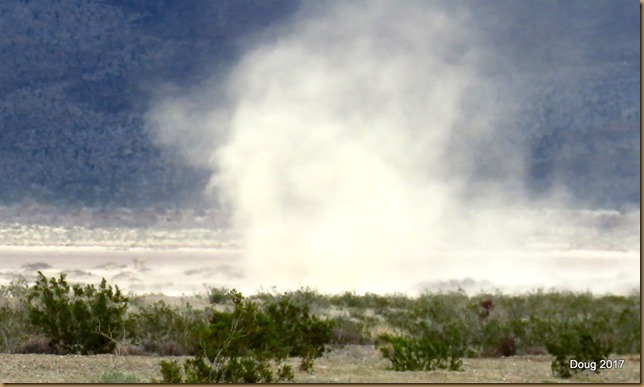 About 11:30, Yuma and I decided to drive just a short way out Coyote Canyon.  It goes about 17 miles into the mountains and is a rough road in spots.  I didn’t want to go too far by myself.  The entrance to the canyon is just on the other side of Coyote Mountain.  So, it didn’t take long before we were into the canyon.

I know I told everyone that I would show all the metal sculptures made by Ricardo Breceda, I saw about a mile outside the small town of Aguanga on Saturday, but that will have to wait another day.  I will get to them, I promise.

Off we went.  First we went through some sand dunes. 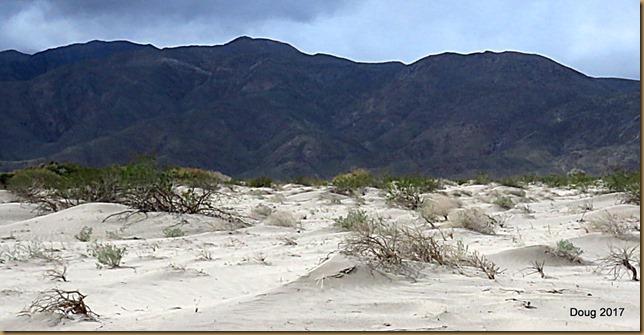 Just as we started, we passed this Raven cawing at us.  He didn’t fly away as we passed.  Just kept staring at us and cawing.  Hope it isn’t a bad omen! 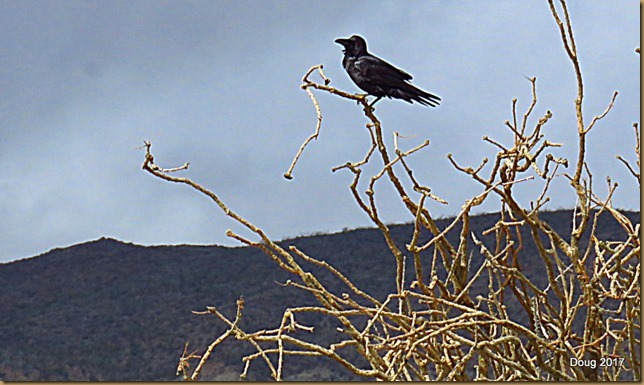 I think the overcast day gives the photos something a little dark and sinister; but the scenery was just beautiful. 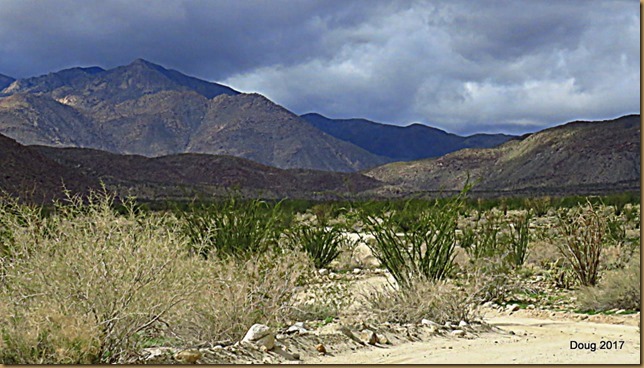 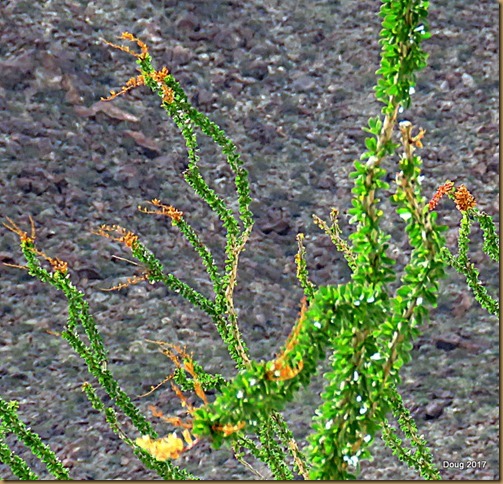 There are three creek crossings in the first four miles.  First time I’ve seen water out here in the desert.  This first one was the smallest crossing. 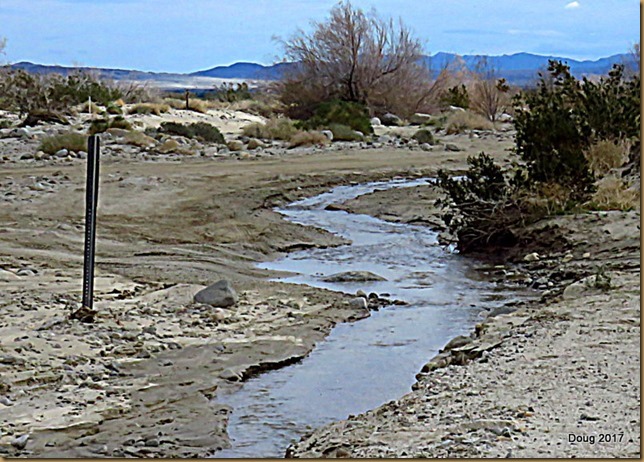 On the other side there was a couple with two large Poodles, so we stopped for a visit.  They were a little aggressive, but Yuma had a good time. 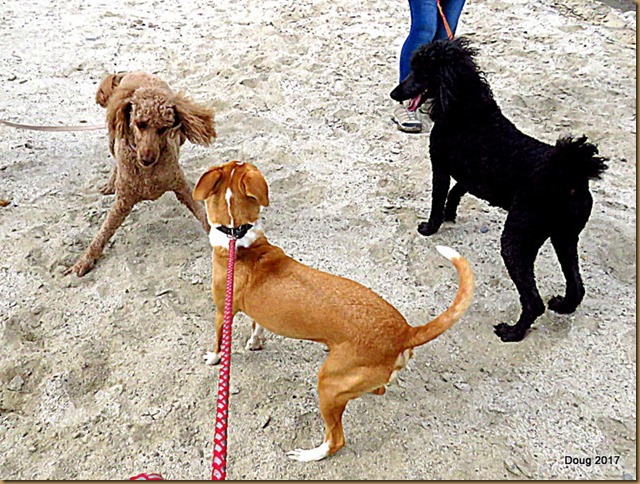 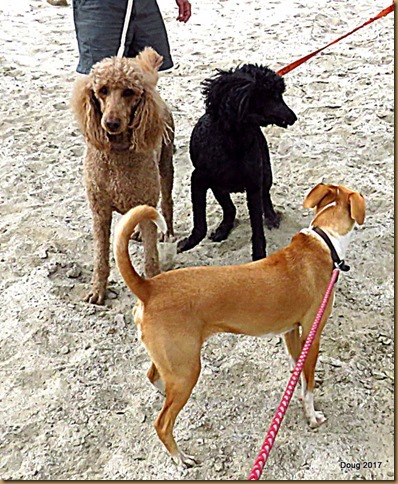 Beautiful mountain views as we drove the sandy road.  Not bad. 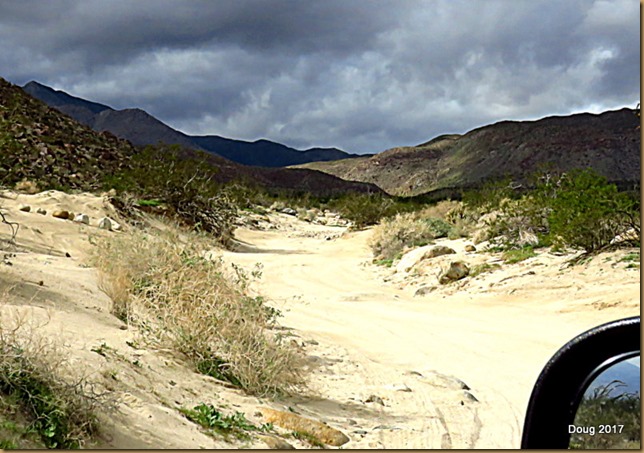 The second crossing was bigger, but still shallow. 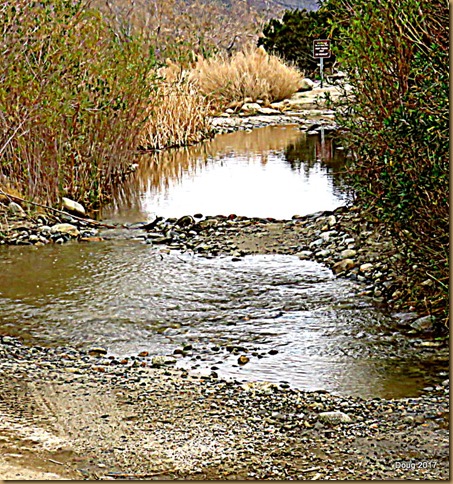 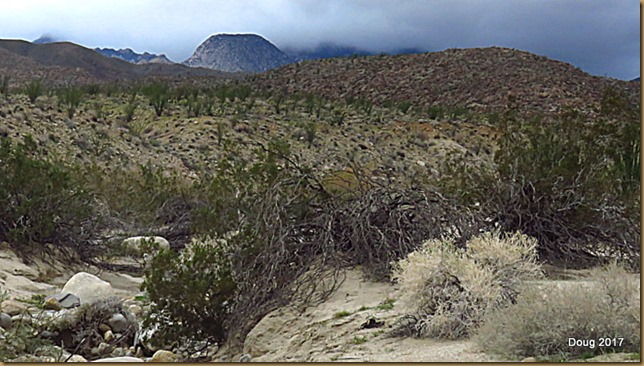 The third was deeper, but shorter. 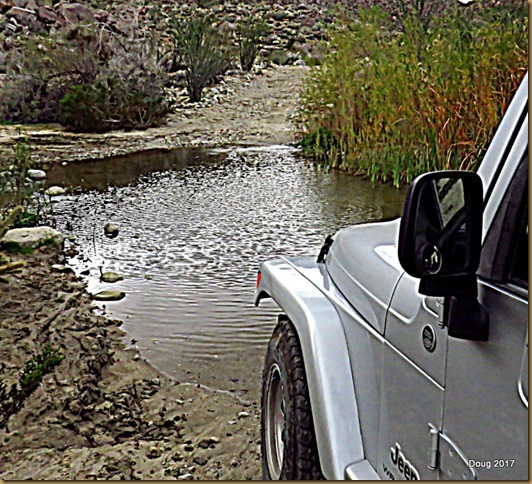 About five miles into the canyon, there is one section that gets rough.  It goes uphill and the rocks are fairly big and jagged.  I decided not to chance going up this section, so Yuma and I parked the Jeep and started walking. 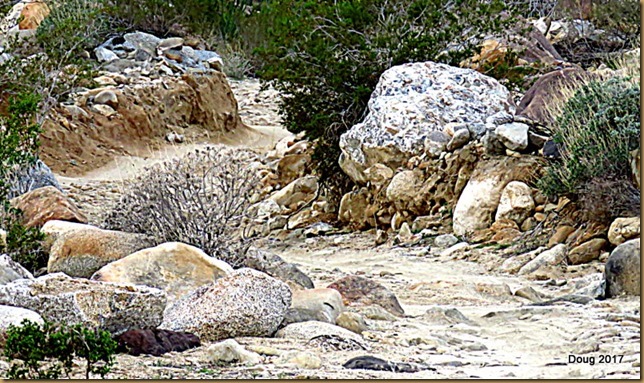 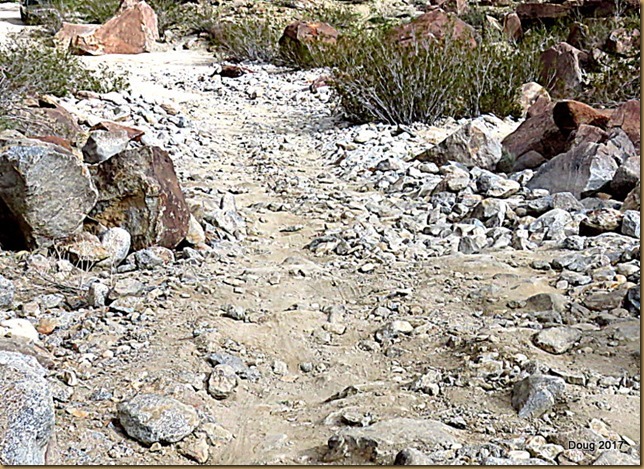 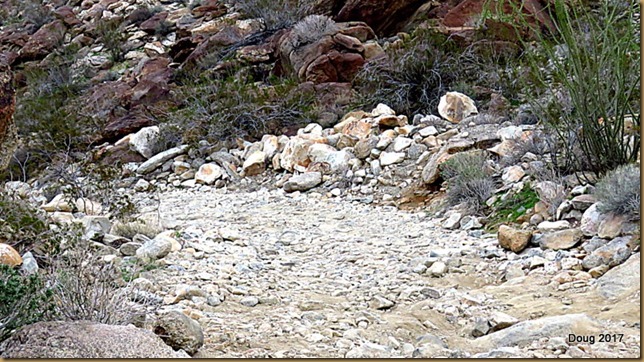 Yuma had a blast running around and checking everything out.  He didn’t run off, but I worried when he got out of sight sometimes.  So, I would call him. 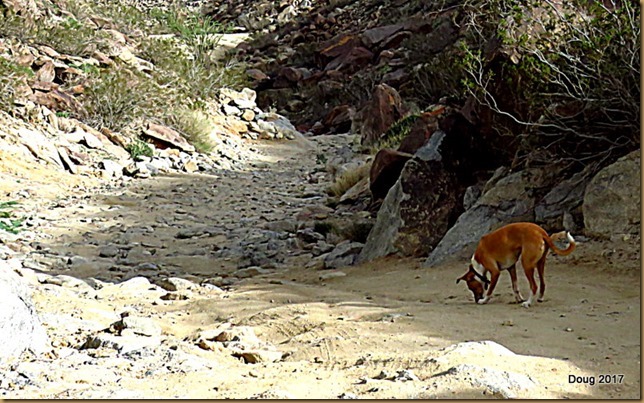 Didn’t take too long before we were at the top looking across a large valley with mountains all around. 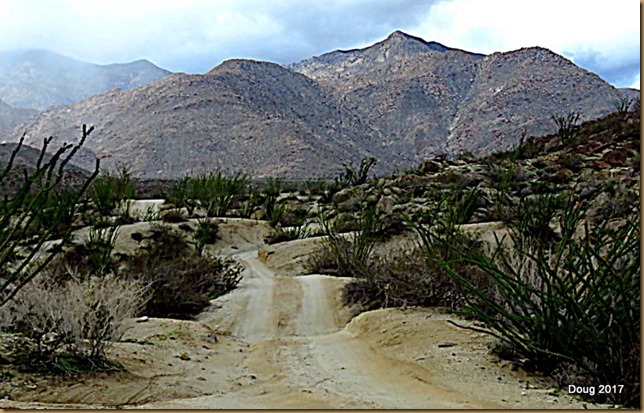 Our hike stopped at the top of the rise overlooking the valley. 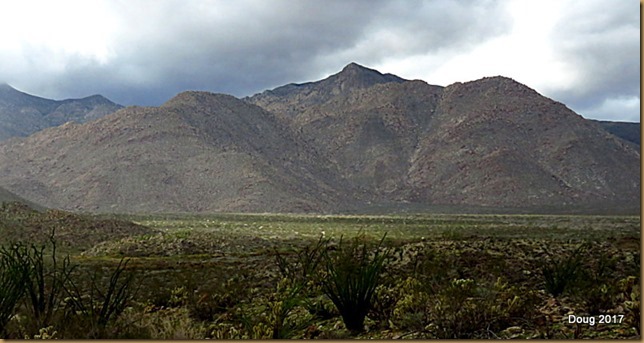 Off to the right center behind that Ocotillo plant way down in the valley, I could see a Palm tree grove.  I wanted to walk down to them, but Yuma said his feet hurt, so we didn’t.  They were probably a half mile away.

We didn’t have to walk down.  I just zoomed down.  I really like the zoom on this camera. 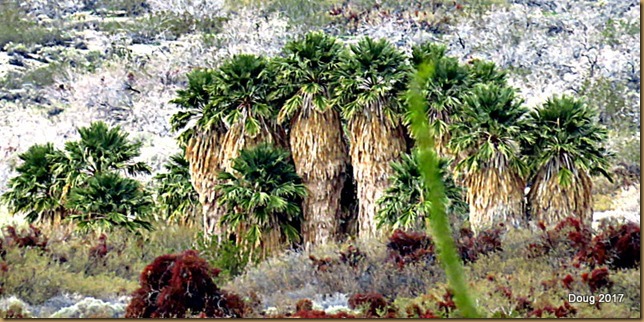 Just a few more photos on the drive back. 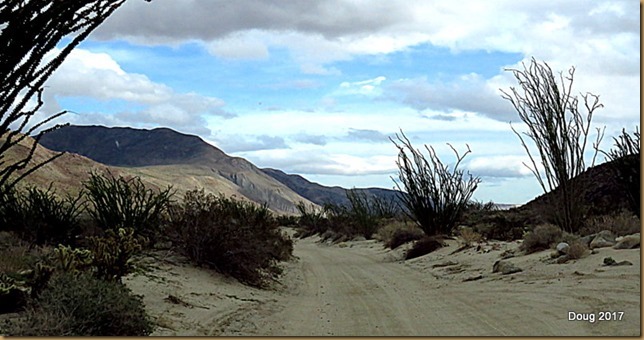 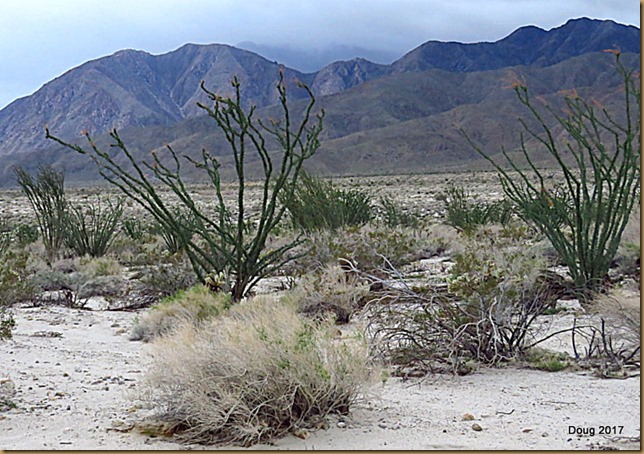 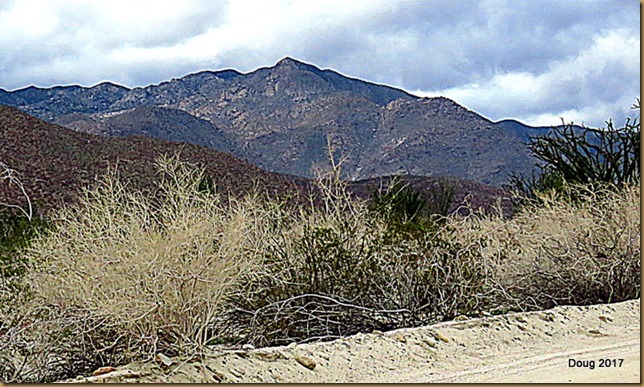 Never get tired of Fonts Point.   That may be my next adventure.