Lost at Red Cloud Mine

Woke up around seven this morning and when I looked out my back window, this is what I saw off in the distance. 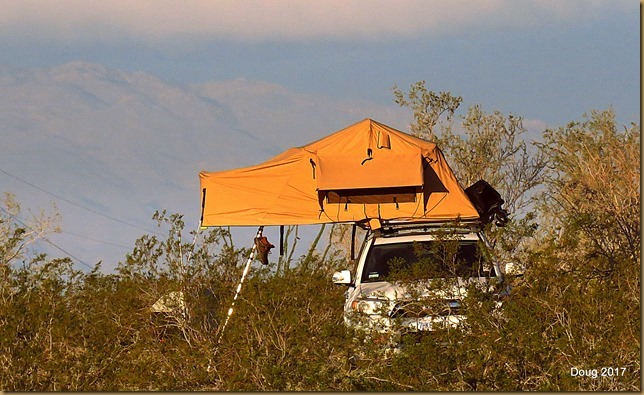 I think they are safe from the Pumas around here.  Have to worry about the Hummingbirds though.  Thought I was in the African grasslands when I first saw it.

I could tell it was going to be a gorgeous day!  Not a cloud in the sky on my walk with Yuma this morning.   You can see Gord and Cathie’s van just up the hill between my RV and Jeep. 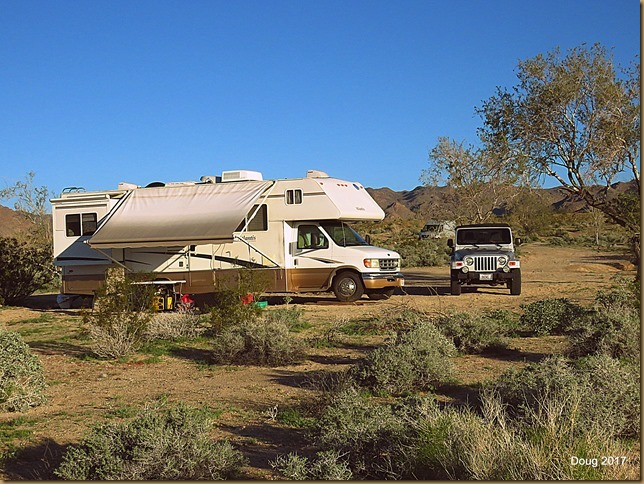 Wasn’t long after, they said their goodbyes and headed up to the Park for the day.  They may be back this evening, if they can’t find an open site within the Park for the night.   Being a holiday, odds are they will be back. 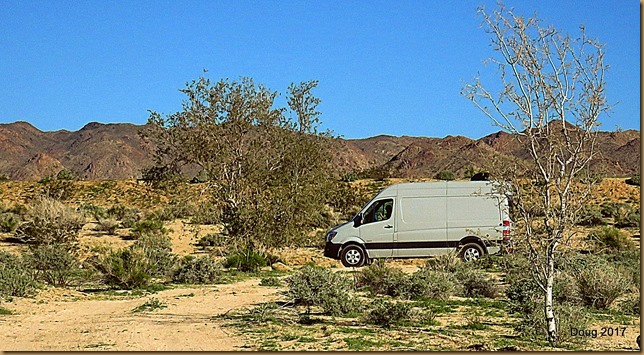 Poor Yuma!  I looked in his water dish this morning and he had company.  A poor spider had fallen and drowned.  Glad Yuma didn’t swallow him. 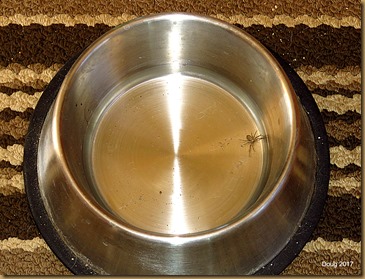 After breakfast and blog reading, we decided to head about twenty miles East on I-10 to the exit for Red Cloud Road.  Friends had been up there and it sounded like a nice adventure for the morning and early afternoon.  So about 10:30, we jumped in the Jeep and went looking for a mine.

There’s the exit to Red Cloud Road and the mine is off to the right in those mountains somewhere. 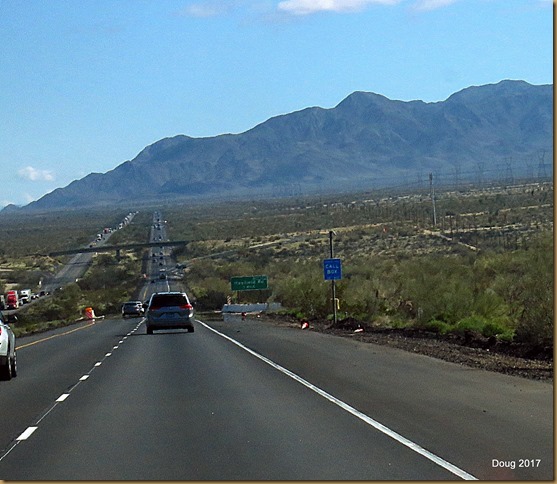 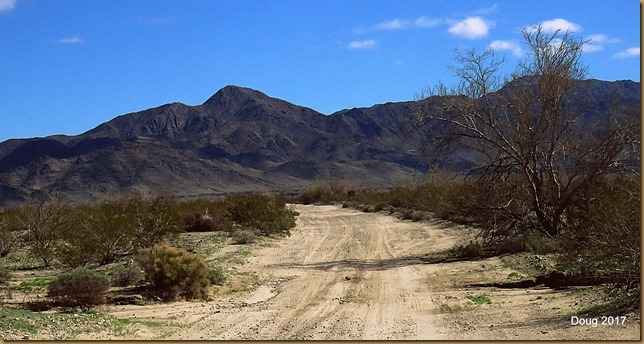 Here is a railroad crossing for the Eagle Mountain Railroad.  It was a private railroad for the Kaiser Steel Corporation used to haul iron ore from 1948 till 1986 when the mine at Eagle Mountain closed down. 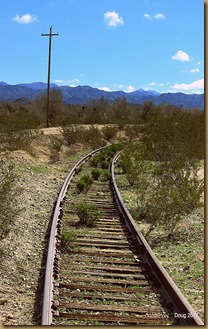 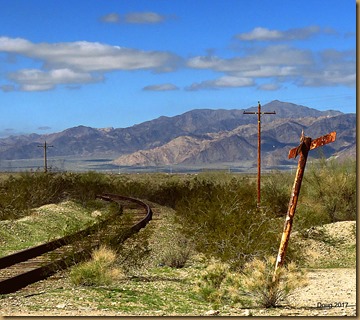 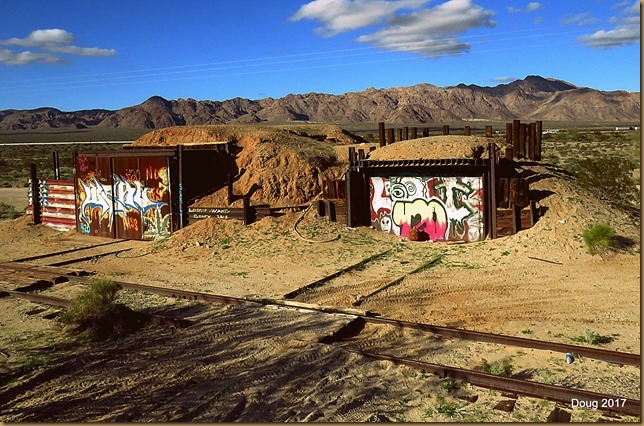 Red Cloud Road is eleven miles long and dead-ends at the mine.  The road is getting rougher, but still no four-wheel drive required. 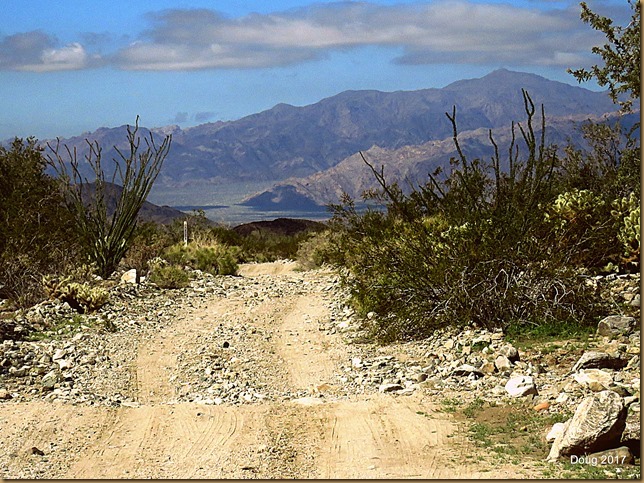 The scenery is gorgeous. 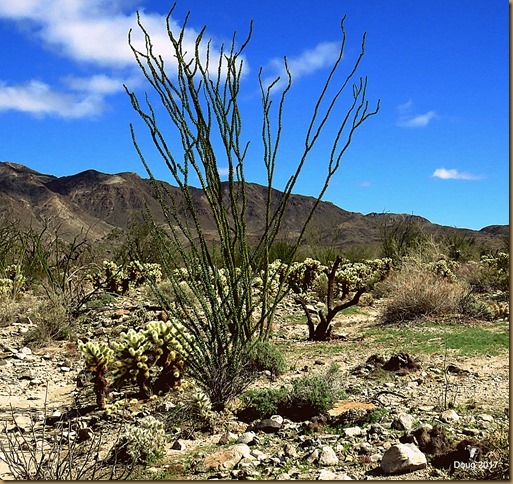 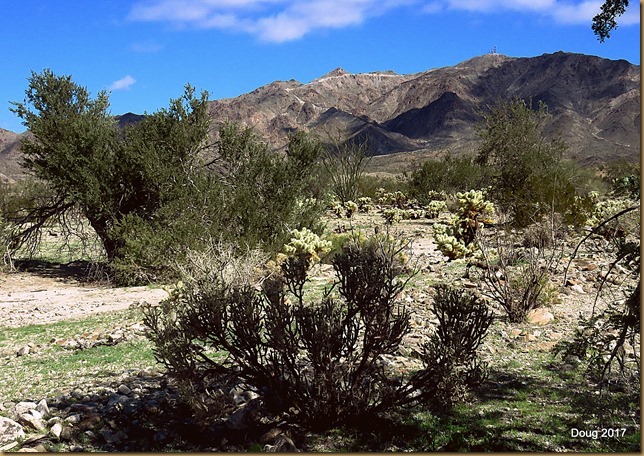 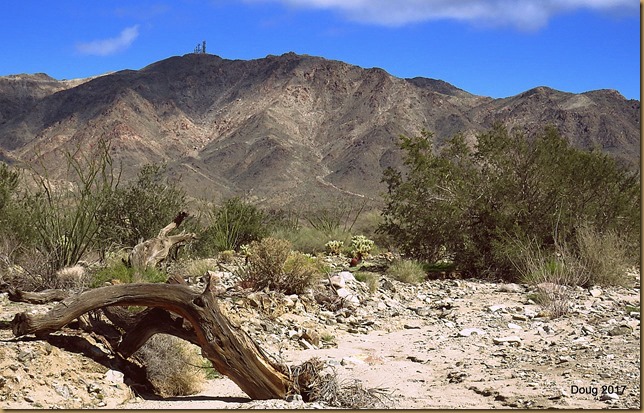 Getting fairly close to the mountains now.  Road is rough but not bad.  Should be there soon, I hope.  These bumps are wearing me down. 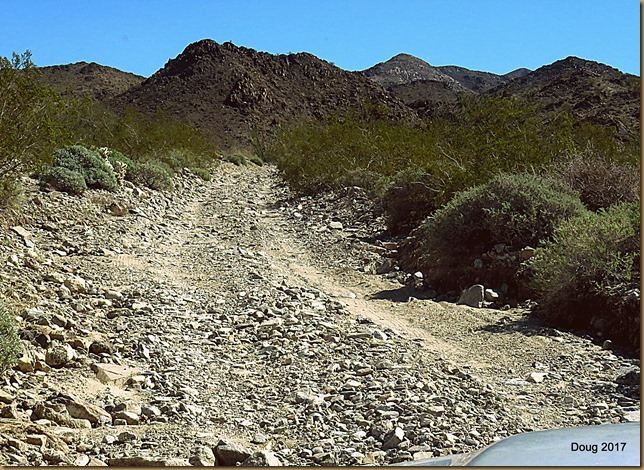 Soon, the canyon walls are close and I drop down into a wash going up into the canyon and I can see a foundation of a home on the hill, so I  know I’m there. 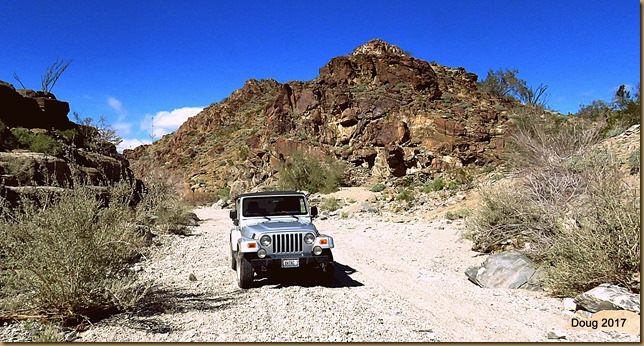 Not much left of the place.  Looks like the house was built entirely of rocks from the area. 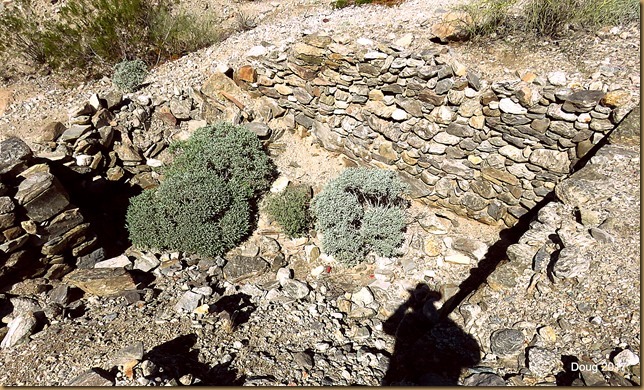 The dark hole in the wall appears to have been a chimney at one time. 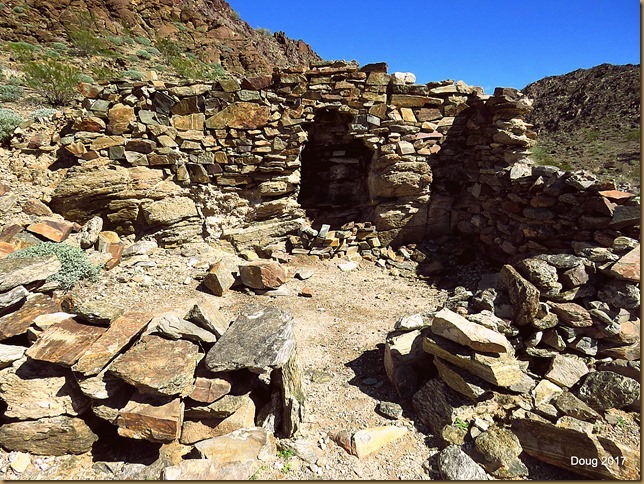 Looking across the wash from the foundation, I could see a mine in the hillside. 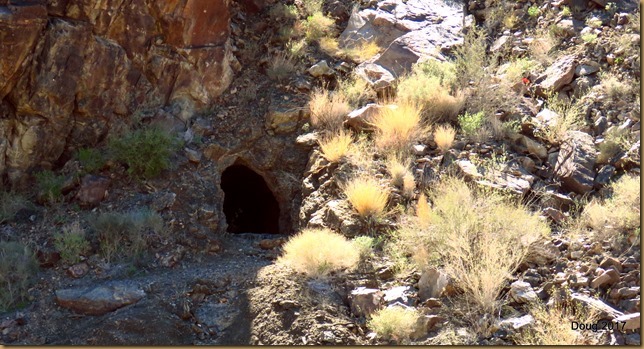 We walked down one side of the canyon, through the wash and then up to to the mine.  Unfortunately, the shaft was straight in and only about twelve feet deep.  There’s Yuma looking around making sure it is safe for me. 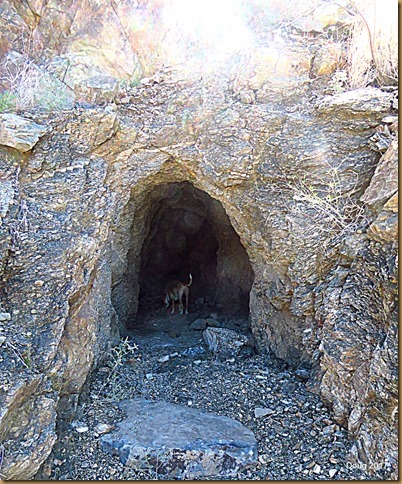 Here’s me inside, looking out at Yuma. 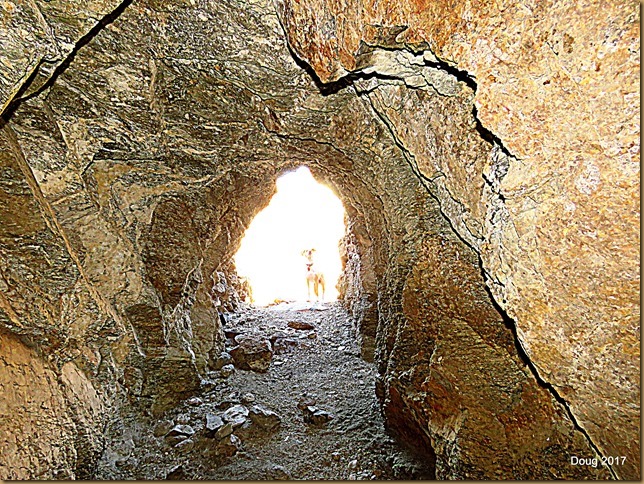 We walked back to the Jeep and started to head home.  It was getting on 12:30 and it would be after one when we get back to the site. 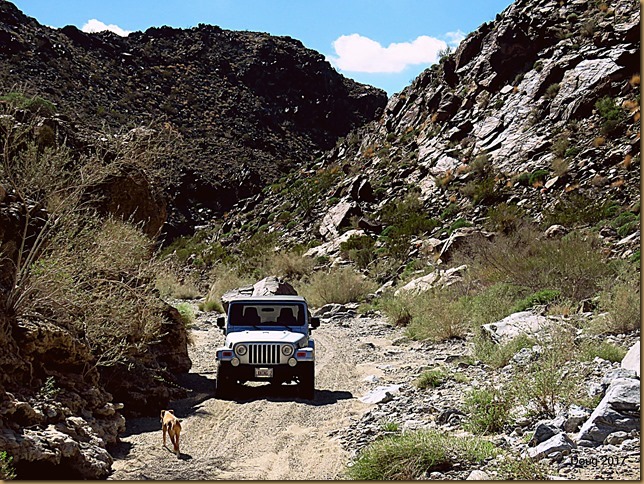 As we were driving up the wash, I could see a rusted car up on the top of a ridge above the wash and there was a road heading up there, so went up to see.

There was metal junk everywhere on the ridge.  Several cars and lots of cans strewn everywhere. 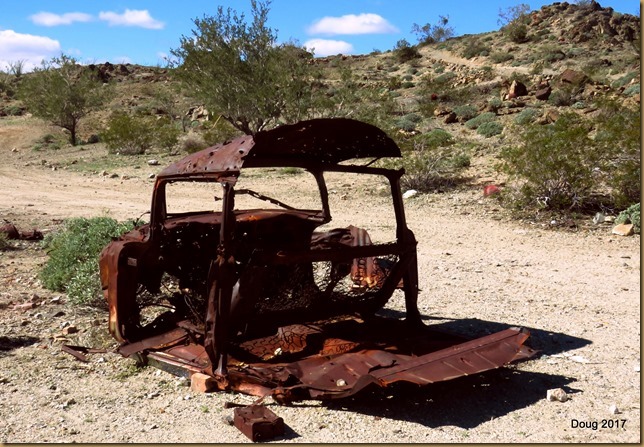 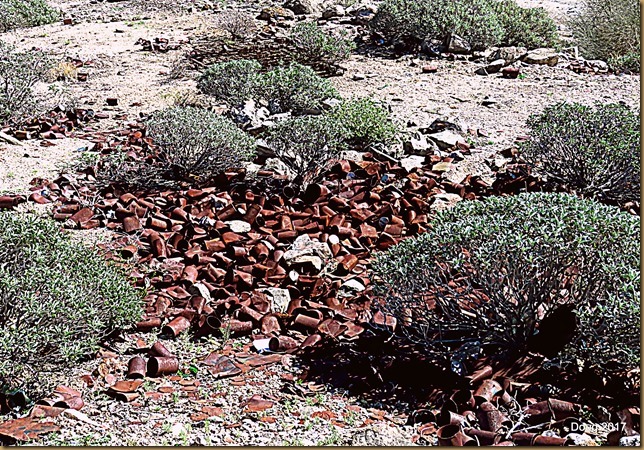 There was another foundation up on the ridge against the hillside behind all the metal junk that looked like it might have been a storage area or something. 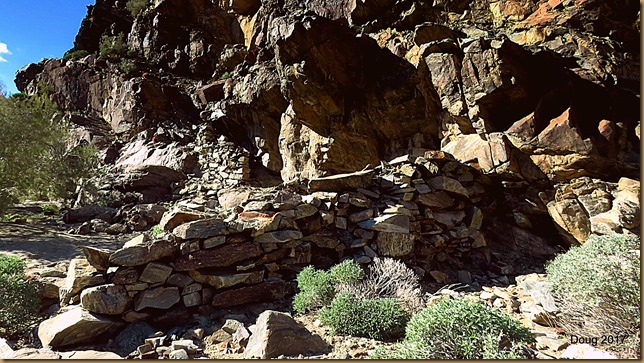 I didn’t see these coming up the wash, so I went back down to the wash and drove along looking for the dirt road that lead out of the canyon.

Now the photos stop for about two hours.  For the life of me I could not find the road that we came in on.  I went down the wash and the rocks in the wash were so big I just knew I had not come this way.  I hadn’t even used four-wheel drive to get to the mine.

I made an error in judgement and put the Jeep in four-wheel drive and went over the rocks.  They were too big and I hit the bottom of the Jeep and we bounced around quite a bit from one big rock to the next.  I then stopped and walked ahead and found the rocks were much bigger ahead.  Over the bumper of the Jeep.

Now I knew I would have to go uphill over the rocks I had just barely gotten over coming down.  I have to admit at this point, I was getting a little scared and so was Yuma.  Amazing how they sense fear.

I wasn’t afraid that I was going to stay lost and die in the canyon, because I had plenty of warm clothes, water and over a half tank of gas.  I also knew that sooner or later a Jeep would come along.   My fear was that I would get the Jeep stuck ten miles from civilization.

I knew I couldn’t just stay where I was and just worry, so turned the Jeep around in the wash and started going over the large rocks.   I was in high four-wheel drive and when I tried to get over them, I got stuck and couldn’t go back or forward.

Put the Jeep in low four-wheel drive and put the shifter in first gear. There was a large rock in front of the tire.  The tire spun against the rock and I could smell rubber burning.  Then, the Jeep jumped over the rock, bounced into some more rocks and we went bouncing up the wash till I was out.  I could hear the rocks hitting the bottom of the Jeep as we went bouncing along.  I will never do that again!

Don’t want to drag this thing out, but we went up to the mine and then back down the wash and up to the metal trash area about four times looking for the road out.  One time, Yuma and I got out and walked up a road that looked promising and it just dead ended at the top of the hill.  When I walked back, Yuma wasn’t with me when I got to the Jeep.

I called and called and he didn’t come.  Now what?  My nerves are already frayed and Yuma is gone.  Walked back up the hill and there he was lying on the ground.  He was afraid to get back into the Jeep.  I had to carry him about 50 yards down the hill and put him in the Jeep.  He was tired of the jostling and wouldn’t have any more of it.  I was tired too.

I decided we would go back to the mine and wait for someone to come along and lead us out.  Just as we were about to the mine, I looked up from the wash and saw a Jeep going by on the embankment above me.  I jumped out of the Jeep and yelled.  The Jeep stopped and I said, “Are you lost!” and he replied “No!”.   I said, “Great, because I am!”.

I went up the hill and there was a man and with a lady.  He said that this was his first time here, but there was another couple in a Jeep ahead of him who knew the area and they had taken them there to show them the mine.

I couldn’t believe that Yuma and I were saved from a night in the mountains.  They called ahead and had the leader wait, till I got on the road above the wash.  Yuma had jumped out of the window when I went to meet the man and he would not come back to the Jeep with me.  The man came down and Yuma followed him and Yuma jumped in the back of the Jeep.  I guess he had lost all faith in his Master.

Followed them back down the mountain and back to civilization.  Thank goodness! 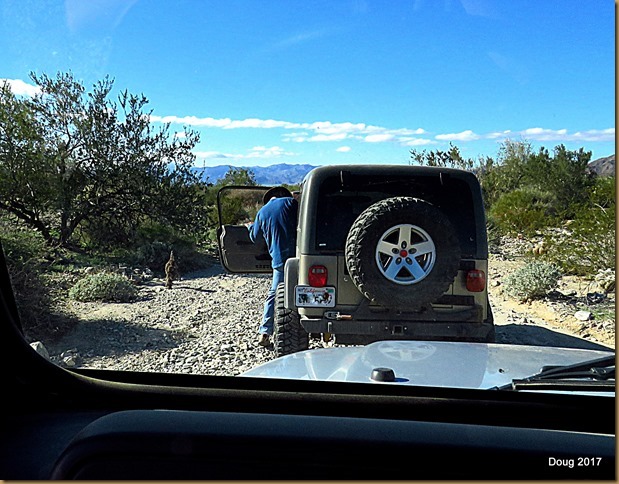 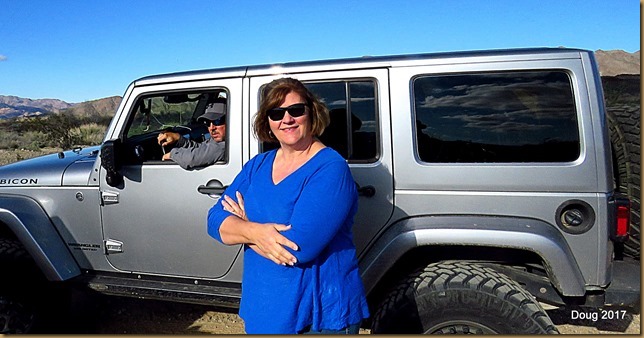 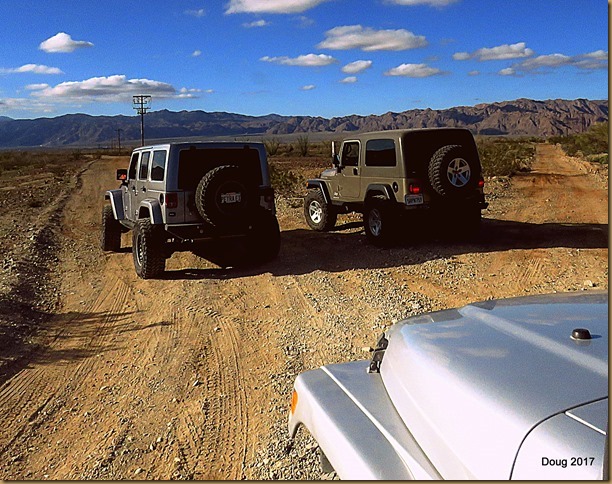 Didn’t get their names because I was so shook up, but I sure am thankful they came along when they did.  I gave them the name of my blog and if they do read it, “Thank you very much for giving Yuma and me a good ending to my blog today!”

When Yuma and I got back to the RV, I had to call Dolly.  Hearing her voice, allowed me to calm down and finally relax from my harrowing experience.  Won’t be going on any long excursions in the mountains for awhile, and when I do, I will certainly use better sense!

After talking with Dolly, Gord walked by and invited me up to his Van for a visit with him and Cathie.  Felt good to get my mind off things for awhile.  We sat and talked till the sun fell low enough to put a chill in the air.  We then said our goodbyes.  They are going back into the Park tomorrow and hopefully it won’t be as crowded as it was on this holiday.