Had a great night’s sleep again last night.  There were thunderstorms and rain most of the night, so poor Yuma spent some time on the hallway floor.  For some reason, I woke up at 4:30 and could not go back to sleep.  It was quite warm and I had the window open.  Too early for the Grackles.  Caught up on some blogs and checked the weather forecast for the Ardmore area.  Looked like there was going to be a lull in the rain for the next hour or so.

I decided not to just lay around and get up and go.  So, at 5:30 while it was still pitch dark out, we headed out.  Thank goodness for GPS.  I decided to not go directly up to Oklahoma City and catch I-44 East.  Instead, I took the backroads north to the east and caught I-44 at Stroud, Oklahoma.

Missed all the OKC traffic and also saved a few bucks on the toll fee.  Because it was dark I depended on my phone GPS to guide me through the maize of backroads up to Stroud.  No problems and I remembered to fill up with gasoline before getting on the I-44 toll road.

When I arrived in Tulsa, for some reason my GPS directed me west on I-44 instead of east.  I caught the problem quickly and exited and turned around to the east.  Decided to just turn the GPS off and follow the signs since it was now light outside.  Of course, this is about the time the rain started coming down.  I had been lucky and it didn’t rain while it was dark.

Ended up four hours later at 10:30 in Joplin, Missouri before I stopped for breakfast.  For some reason, I just can’t slow down and relax when it comes to driving.  Especially, if I have a destination in mind.   Of course, it rained the whole time from Tulsa to Joplin.  Luckily, I was on the interstate so wasn’t bad. 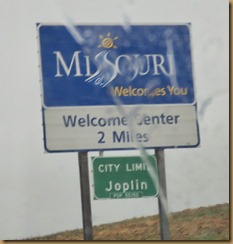 I took an hour break and fed Yuma and I had my breakfast.  Looking at the maps, I decided to go two more hours and spend the night at the Walmart in Lebanon, Missouri.  I’ve spent the night there a number of times before.  That’s where I stop the first night on the road from Bloomington.

However, as I was approaching Lebanon, I saw a sign saying Missouri Rest Area.  I remembered that George and Suzie (Our Awesome Travels) had spent the night there and said it was a nice place.  Pulled in around 3 o’clock and shut down for the day.  Traveled about 280 miles today.  I have another 260 miles left.

Didn’t sleep, but spent the next few hours laying on the bed resting with Yuma.  Had to turn the Wave heater on.  It is 46 degrees here and spitting rain so I had to change from my shorts to long pants and put on a sweatshirt.  I guess shorts are done for awhile.

Decided to put the local TV antenna up and watch the local Springfield news and weather.  Lots of flooding south of here in the Ozarks.  Looks like most of the rain is staying to the south and should be out of here by morning.  They’re calling for fog, so may not get an early start tomorrow. 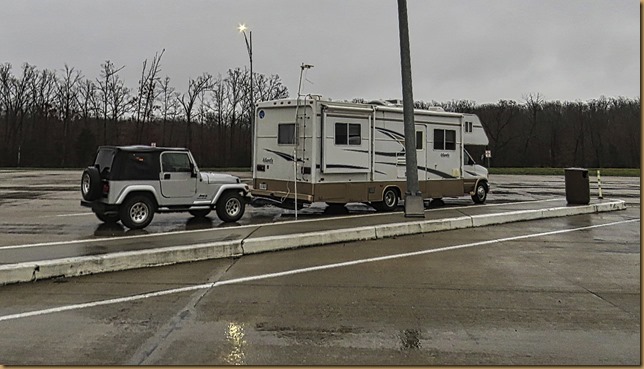 Now I’m watching NCIS and just relaxing.  After I publish this post, I will fix dinner and watch a little more TV before calling it a night.  Should be tired enough not to wake up at 4:30 in the morning.  I’m excited about arriving home tomorrow.  I’m sure Fergie will just love to see Yuma again.