Like a broken record, I awoke at 4:30 and took some Tylenol and went back to sleep till around 7:30.  Today's the day or so I thought.  I got up and went through my routine of walking Yuma while the coffee perculated in my old tin pot.
As I was going through my cheese and crackers, I saw I had a phone message from yesterday afternoon late.  When I listened to it, it was an 18 second message from Kenny telling me one of the parts they ordered did not fit and they needed to reorder and the walk-through inspection has been delayed till Tuesday at 11 AM.  Bummer~!

Oh well, gives me more time to get things done and figure out what to do with two motorhomes.  The weather today is going to be fabulous.  75 with no wind and all sunshine.  I took advantage of that and Yuma and I laid outside absorbing the sunrays and getting our tans.  I got a little done on Miss Adventure too.  I washed all the windows inside and out.  So, I did do something anyway.  Need to have that feeling of accomplishment each day.

About 1 o'clock we decided to run into Quartzsite and see if we could find a couple of things I want for the White Lion right away.  We wandered round the tents looking.  I found what I wanted but in the wrong colors.  Doesn't anybody like OD green anymore?  I was looking for two outside chairs with a little table attached.  Found the outside rugs I wanted but they didn't have either the chairs or rug in the OD green to match my motorhome's color.  No green at all.  Oh well, maybe another day! 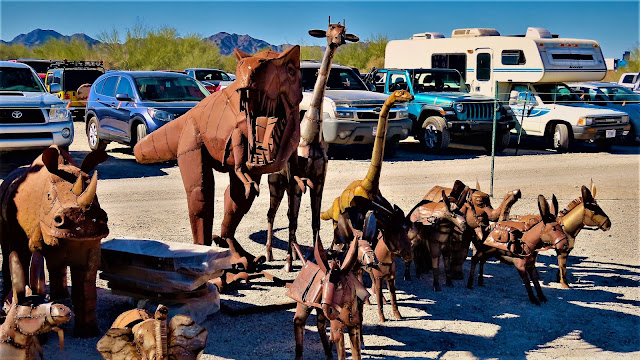 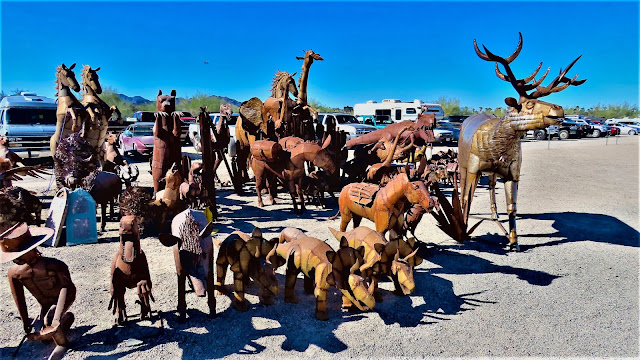 I didn't go away without spending some money on two completely unnecessary items that I just liked.  I happened to walk by a tent named Bodily Defense.  Some of you may know I'm into that sort of thing.

They had a nine inch long sheath knife.  That included the blade and handle.  Beautiful handmade Wild Turkey with an ornamented ivory handle.  Used and got it cheap with a little wheeling and dealing.  He said $35 and I said I'll buy it.  They also had beautiful corduroy vests with CCW pockets that I have always wanted, so I picked one in brown that closely matches my hat and knife sheath. 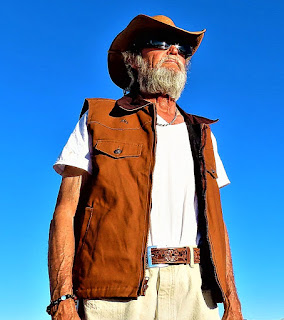 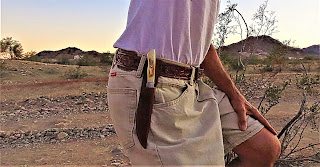 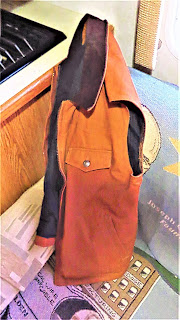 As I was returning to camp, I stopped at my neighbors, Donnie and Rosie.  They had friends there and were sitting outside and waved for me to stop and join them.  Yuma was very happy.  That's where Major lives and he knew it.  We had a great visit.  The four of them are gold diggers.  There passion is to dig around here for gold.  Don't find much but they're hooked.  They've come for the Gold Diggers convention next weekend.  I'd rather just watch Gold Rush on TV and forget the digging stuff.

After that Yuma and I got home just before sundown and just laid back and did some more relaxing and listening to some Willie Nelson songs.  Time for dinner and writing about my day of delay.

See you later.
Posted by Doug Laning at 8:27 PM