Slept fairly well last night, but because I'm feeling better, I was anxious to get the day started, so ended up getting up and going right at daybreak.  With no problems staring me in the face, I decided I would drive into Yuma and look for a small electric refrigerator/freezer.

Dolly texted me this morning to let me know that today is Yuma's birthday.  He is six years old.  He's been with me for five of those six years.  He was born right here in Winterhaven, California too!  Happy Birthday to Yuma!

After taking a walk, having breakfast and then reading blogs and making comments, it was time to head to Yuma.  Already 11 o'clock.  Poor Yuma gets to stay home and be a watchdog today.

I already have all the solar stuff and batteries, so just need the fridge.  I'm going to keep the large refrigerator and remove it when I get home and either give it to one of the children or place it in our garage.

Stopped at Walmart and turned in a bottle for a new prescription and looked around the store.  No mini-fridges to be found.  Probably could order online, but I want to see one first.  Then I moved on to Lowe's.

As I was wandering around the appliance department, I saw small fridges, but no fridge/freezer combos.  A young lady came up and asked it I needed help, so I explained what I needed. She said they had one compact refrigerator / freezer left on the floor.

I took a look at it and it was a little larger in size than I really wanted, but the 4.5 cubic feet storage sure sounded like a nice size for storage.  Cost is $237 total which won't break the bank.  It uses 15 amps of power and I think a couple of solar panels can handle that.  Might need one more.  Tomorrow, I will go to a solar store and discuss my situation with them before opening the box.  Just in case there is an expensive surprise in the solar department.  Have no idea where I'm going to put it, but this is the one I want, I think. 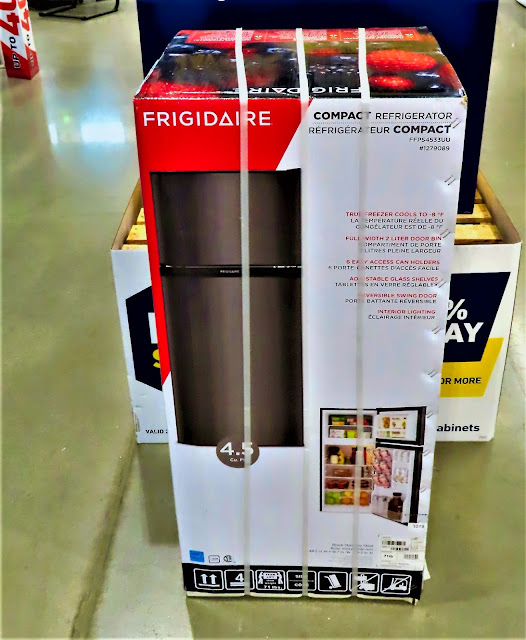 The first problem was getting it home.  But with a little work and removing the back window, we were able to get it safely in the Jeep. 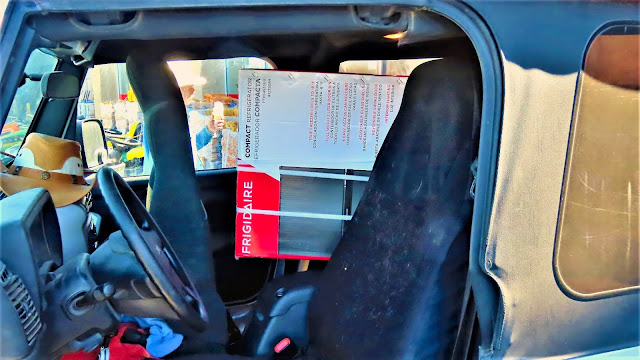 Got it home with no problems and then Yuma and I were able to push the 72 pounds up and into the White Lion where it now stands. 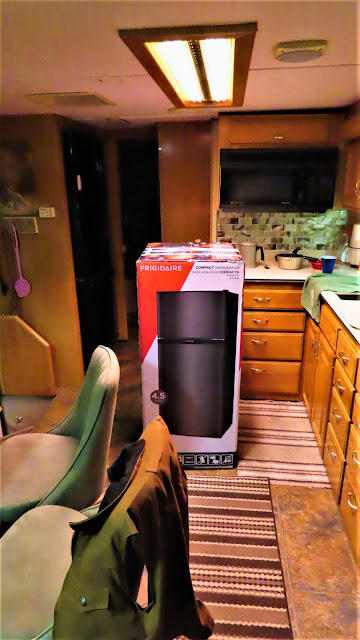 I haven't taken it out of the box yet because I'm not real sure if this is the one or not.  I think so, but still got some thinking to do as to where to safely store it while traveling.

The gang is having HH today at three o'clock and it is already three.  So, I took Yuma for a quick walk and had a sandwich for lunch and headed over to Ken and Kim's place.   Everyone was there and we had another afternoon covering most subjects that needed to be discussed.
It was a beautiful afternoon with plenty of sunshine and a slight breeze.  Love days like this.  Friends Ken and Shirley had mentioned they may be coming this way from the LA area, so we kept a watch out for them but I guess they didn't make it in time.  Hopefully, we will hear something from them so we don't need to worry.

At about 5:30 we broke up and I quickly went home to take Yuma for a walk.  Poor guy is not having a good birthday.  :((  Hopefully, I can make it up to him another day.  I was going to give him a bath, so he should be happy he missed out on that. :))