Over the hump of problems?

I slept last night to the sounds of the food spoiling in my electric refrigerator with no electricity.  Is someone trying to tell me something or what?

I did sleep well because I was so worn out I think.  Woke up around 8:30 after the sun which I always prefer.  During the night, I realized the box that wasn't working was a surge protector and not an inverter.  So, first thing I did was run out to see if there was a switch to reset it.  No such luck.  Must reset internally.

One of my new readers, Jasper asked how to subscribe to my blog.  Not sure if this is the solution or not, but when I went to the blogger design settings I found a gadget that allows you to be notified by email when I make a posting to my blog.  I've added it to the top right column of my blog.  Give it a try if you like.  Thanks for the idea Jasper and welcome to the blog.

First thing this morning, I got a text from Ken saying he saw I had an electrical problem and if it was still a problem, let him know and he could take a look.  I couldn't type fast enough to let him know I'd be happy for him to come on down.

I had just called Foothills RV and made an appointment to take the White Lion in tomorrow at 4 o'clock.  Ken was down in no time flat with an electrical monitor and his electrical skills and common sense.  I lack in both those areas.

Ken could tell right away that the 50 amp connection cord was not put together properly.  I explained that I thought RV Lifestyles may have pulled the cord when moving the motorhome before I purchased it.  They were feverishly putting it together when I walked up to the motorhome for a walk through.

After checking the surge protector out and seeing that no current was going to it, Ken turned his attention to the plug and started unscrewing it to see what was inside.  This is what he found. 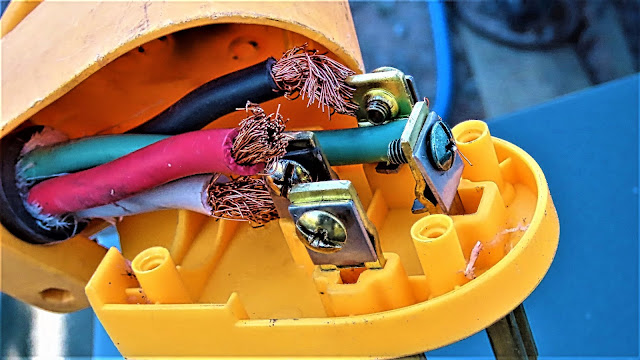 We were shocked!  Only one of the four wires was connected to a terminal.  It was amazing no one was electrocuted.  You can see the black markings of a short at the top of the casing.  In their haste to get the MH up and going with electricity, the maintenance man at RV Lifestyles had done a quick and dirty fix.

Ken spent a great deal of time getting the wires properly sized and fitted into the plug and screwed it all back into place.  Turned on the electricity and waited for the surge protector to go through its testing routine and voila, I now have electricity.

That's twice now Ken has saved my bacon, or at least a lot of money.  Thank you Ken for your offer and for the results you produced.  I hope I can pass the good deed on down the line to someone else in need.

After Ken left, I got back to having a big breakfast.  Had four strips of bacon and two eggs.  Had to throw away the milk because it was rancid already.  I needed the food intake that's for sure.

For the remainder of the day, Yuma and I laid outside in the beautiful warm sunshine just enjoying the fact that all was right with the world once more.  At least for today anyway.  No promises for tomorrow.  :((

As I relaxed though I did get one thing accomplished I had been wanting to do.  I mopped the dirty linoleum floors in the bathroom and living area.  They were so dirty from all the people that had traipsed through it while on sale.  Took all afternoon, but I was in no hurry and I enjoyed getting something accomplished, even though it was a small and simple something.

Yuma had  been a good boy all day, so late in the afternoon, after a big lunch, we took the Jeep to Knob Hill Mountain just South of us and let him run free for awhile.  I have to admit, I enjoyed getting back out to mother nature once again for a fresh breath of air too.  Almost got lost in all my little problems that really don't mean much in the larger scheme of things. 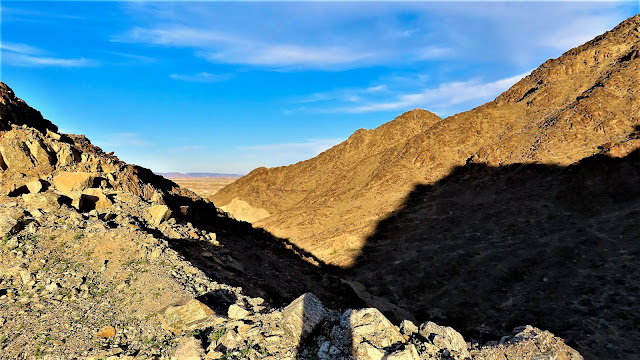 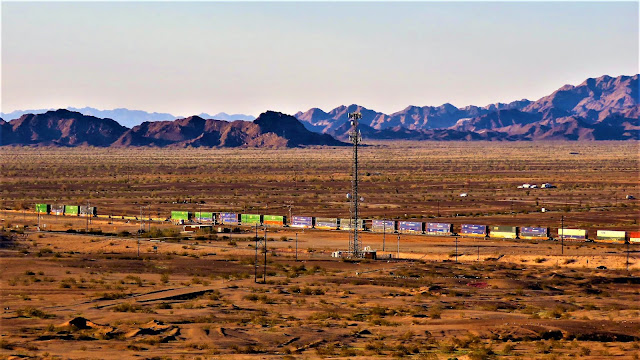 Other than still feeling weak and having a small chest cough, I am doing much better in the cold department.  Thank goodness for that!  Get a big dinner tonight and a good night's sleep and tomorrow will be another great day in the Southwest sunshine!