Finally hot water and Happy Hour at my place

Yuma and I stepped outside and it was already quite warm with nary a breeze.  Going to get near 80 today.  Had a little breakfast and then started reading up on the Hurricane water heating system I have.  Luckily, I have a very specific manual.

My new neighbor, Don has a similar heating system, so went over and he and I went over the manual and just followed the instructions for starting it up.  It did start and made noises but no hot water.  We both figured it would take a while for the water in the tank to heat so I told Don, I would wait and let him know if I had hot water.

It was about a half hour and then I turned on the water and let it run and it wasn't long before it turned very hot.  Now, I had hot water when I was plugged into the electric post at the RV Resort, but this Hurricane system is driven off the batteries and runs on diesel fuel to heat the water tank.  Now I have hot water while boondocking as well as when connected to electricity.

The coach heating is also run off this system, but I'm not going to test it out till I get home.  Won't be needing heat for the rest of this winter down here.

I was planning on heading into Yuma today to get food and pick up the battery monitor I ordered, but they never called to say it was in, so I'll go tomorrow for sure.  I also want to pick up a small propane Weber grill so I can cook outside.  Yuma is tired of the smoke alarm going off.

While reading the manuals, I also found where the cruise controls are.  Not on the steering wheel, but on the side where there are many switches near the side window.

This coach has more buttons and switches than I'll ever figure out.

After getting the hot water to work, I noticed the coach was listing to one side because the air bags were slowly losing air.  I put the levelers down and straightened up the White Lion so it was level.  Told you this thing has everything.

Then I decided to check the air pressure in the tires just in case.  Three of the four rear tires read fine but I could not get the driver's inner rear tire to register air pressure at all.

Uh oh!  I tried pumping it up with the compressor but it would only take a little air.  I even thumped all four tires with my thumper and they all sounded the same.  I noticed the valve stem appeared to be way out compared to the others.

I have a stem tightner but have no idea where I put it when I moved.  Don, again to the rescue.  He had one and brought it over.  Sure enough it was close to coming out but luckily, after tightening it down and testing the air pressure, it was right on the number.  Another potential tire problem averted!

I received a text from Patsy asking if it would be okay to have Happy Hour at my place.  I was thrilled and told her I would love for them to come by.  I had wanted to ask them but wasn't sure if I should.  Thank you Patsy for taking the initiative!  Made my day. 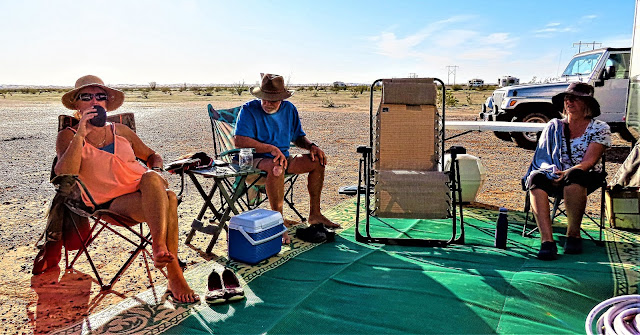 We had great discussions and I think we all learned something.  Yuma was well behaved and just laid at my feet.  Sweet boy today!  It was quite warm and the wind  picked up so I had to pull in the overhead canopy, but it soon cooled down as the Sun moved further to the West.

Everyone was gone just at 5 o'clock and Yuma and I came in to have dinner.  Another day of steak, corn and this time only half a potoato.  After last night's very big dinner, I checked my sugar level this morning.  I was pleasantly surprised to find it at only 114.  I'll take that.  I'm gaining a little weight and feeling much better.

Time to finish this post and enjoy the evening before going to bed.  I'm finishing early for once and that's nice.  Darn it.  I can't get the pictures to upload, so I'm heading out in the Jeep to find some internet power.

See you later.
Posted by Doug Laning at 9:18 PM