Worst Day and Best Day of my RVing Experience

Yesterday, I did not write a blog about my trip to the Swansea ghost town 30 miles east of Bouse.  The reason was I spent last night sleeping in my jeep next to the miners’ cabins in the ghost town.

Al, from Travel with the Bayfield Bunch had sent me a comment about this ghost town, so Yuma and I got up early to head out there.  It’s about an hour and forty-five minute dirt road trip so wanted to have plenty of time to see the place.

The drive was beautiful.  The first portion was desert and the road wasn’t bad. 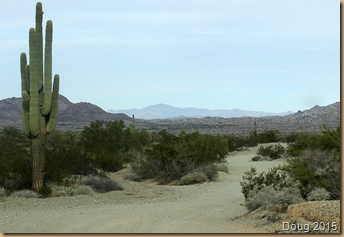 I even stopped to grab a photo of Yuma and me with the jeep in the background. 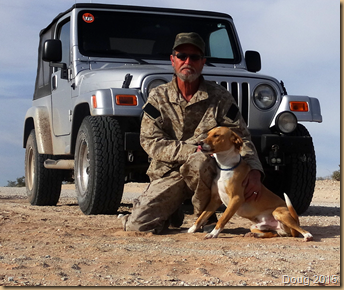 After about an hour we got to the mountains and the road was a little rougher, but Yuma showed me the way. 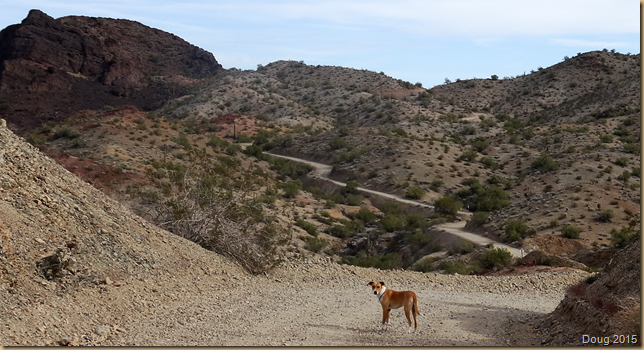 Soon we were heading down into the valley where Swansea is located. 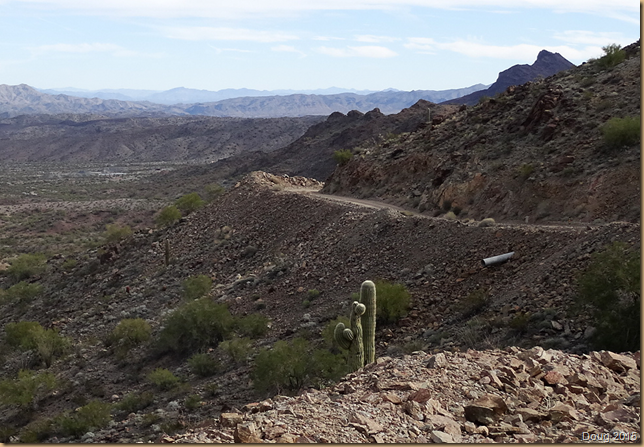 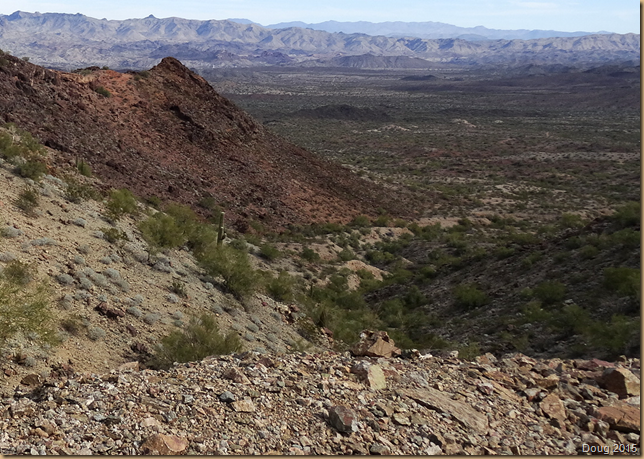 Here is a closer view.  See the nice new roofs? 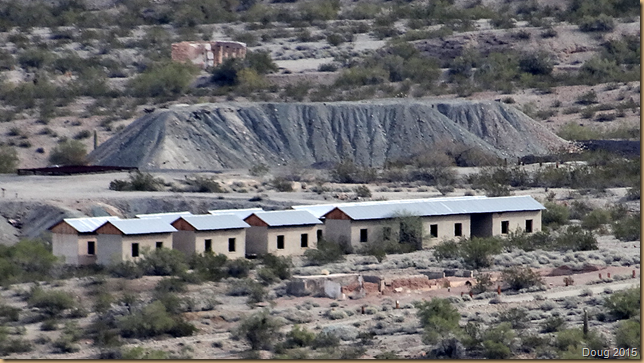 When we got to the little building that had brochures and descriptions of what we would see, there were three other vehicles and and about eight people congregated there.

I let Yuma out of the jeep without his leash and he was an instant hit with the group and he seemed to enjoy their attention.  In listening to them, I found that three of the men had worked at restoring the roofs of the miners’ cabins over the past 10 years.  They only worked on Fridays because they were doing it on their own time.  These men knew a lot about the history of Swansea.

We then all went down and stopped at the miners’ cabins to begin our individual tours of the area.  One of the men was Irish and he and I talked quite a bit about his travels here each Friday in the winter to work on the cabins. 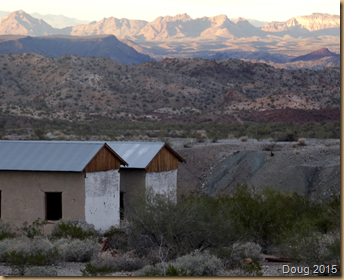 Yuma seemed to be enjoying himself walking around the people and the cabins. 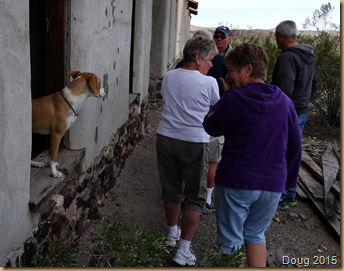 After about 15 minutes, I called Yuma to come so we could go look around.  Yuma gave me a look of pure fear, like he had no clue who I was.  He took off with his tail between his legs around the other side of the building and down a quarry embankment to the south and up the other side along a mountain ridge.  Over the ridge he went out of sight, all within about 45 seconds.   He ignored my pleas for him to stop.

I couldn’t go down the quarry embankment, because it was too steep.  I had to run around and by the time I got to the ridge, he was long gone and all I could see was mountains,  ridges and ravines as far as the eye could see. 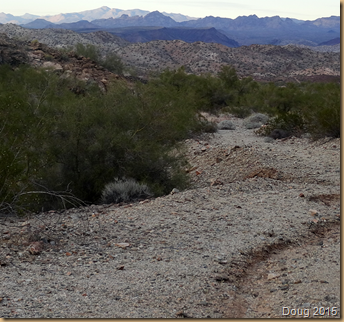 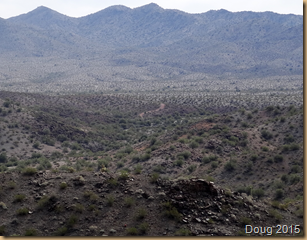 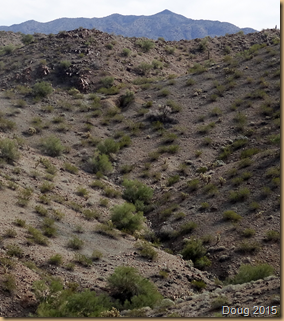 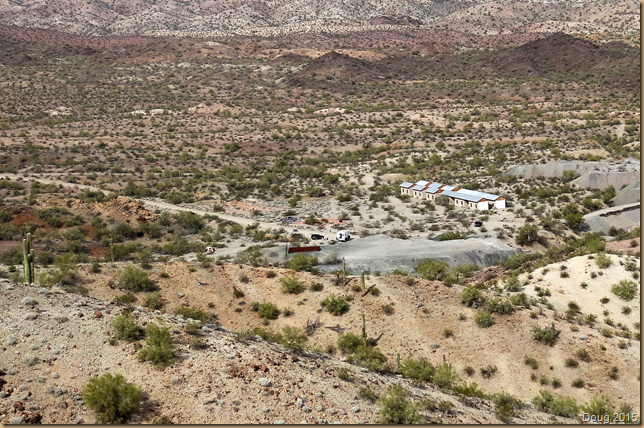 You can see my jeep down there behind that rusted brown mine hole cover if you enlarge.

This happened around noon.  I spent the rest of the day climbing to the tallest mountains within sight of the jeep, so I could make sure he didn’t go to the jeep to wait for me.  I called out till I was hoarse pleading for him to come back,  I climbed up and down everywhere I could, but no Yuma.  Finally, I just sat on a rock at the top calling out and crying for him to come back.  I was just too stunned and exhausted to do more.

Evening came and then the sun was gone.

It was just me sitting in my jeep and Yuma out there with the coyotes and ravines.  All night, on the hour, I would start the jeep, turn on the heat and lights and go out and call for him.

At 7:30 the sun finally peaked over the mountains to the east.  I sat there quietly, looking all around hoping he would notice my single jeep, but no Yuma.  I made one more climb to the top of the nearest mountain and called out for him. Nothing but silence came back. 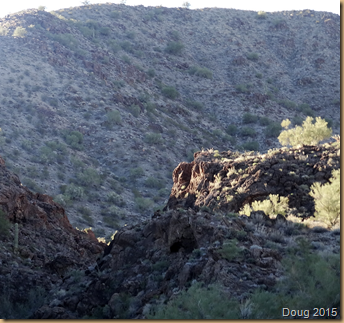 It was now 9:00 am, and I decided he was no longer in the area, so I would drive back to Bouse praying I would find him running down the dirt road looking for home.  Although, I’m sure he didn’t know where that was because I had just arrived at the BLM camp late the day before.

I turned the jeep around and started down the long crying road.  I went no more than 50 yards when something caught my eye out my driver’s side window.  There was Yuma galloping along next to the jeep.  I could not believe my eyes.  I stopped the jeep and Yuma jumped on me like nothing ever happened.  I put a leash on him quicker than lightening and put him in the jeep.  My prayers had been answered.

He didn’t have a scratch on him thank goodness.  I cried on the way to Bouse, but they were tears of joy and not the tears of loss and sadness.

Earlier this morning, I had planned to put photos of Yuma and description on my blog and then go to the 2015 Blog-Fest and ask everyone to copy a photo and put it out on their blog asking for help in getting Yuma home safely.

I am so glad I was able to attend as just another blogger wanting to meet other bloggers.   I was very surprised at the turnout.  There must have been at least 40 RV bloggers at this first ever event.  A good time was had by all.

I am going to do nothing but go to Parker, Arizona tomorrow for Walmart shopping, gas for the jeep and laundry, so I will post the photos of the Blog-Fest then.

Yes, these two days have been the best and worst of my RVing adventures.  I guess in the scheme of things you would just call it a wash and nothing more.