Thi morning, Yuma and I decided to take a hike up Coyote Mountain for as far as our legs would take us.  The other day when coming back to camp on Henderson Canyon Road, I saw a jeep road leading up to an iron gate not far after we turned on to Henderson Canyon Road from S22.

Turned into the jeep road and parked just short of the gate and we began our hike up the mountain.  My plan is to hike up as far as we could and then return.

The trek up was long.  The jeep road started out as a nice road but quickly turned into a  trail that had not been used by any vehicles for a long time.  Saw one ATV tracks that had gone around the gate at one time in the past and that was it.  The trail zig-zagged back and forth as it went towards the top. 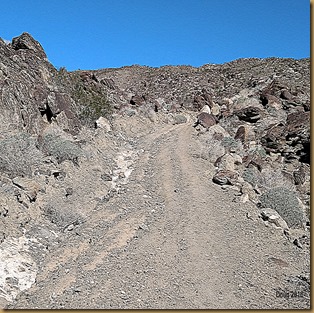 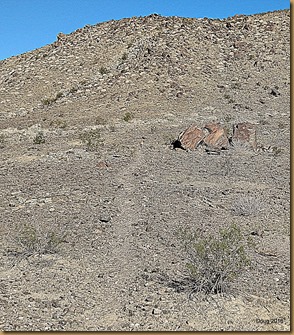 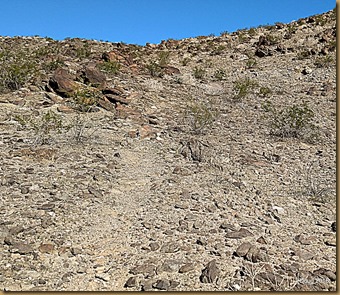 I was glad to have Yuma with me.  The trail was hard to see, and when coming down, Yuma used his nose to find the correct turns in the trail to get us down.

It is supposed to cool off today, but not till evening, so as we climbed, the temperature and sun climbed also.  After a couple of hours and just over two miles based on my Fitbit, we had reached a place that did overlook the valley, but there was more to the mountain to the south.  However, as I looked at the trail leading up to the south, I knew it would be too far for us to go in one day.

We did reach the summit of the mountain we were on and that would have to be our goal.  I could see for miles to the west, south and east.  To the north, Coyote Mountain kept going up at a gradual pace.  We had walked up the hard part.  From what I could see, it was gradual from this point on.  However, there were miles of trail to the very summit of the mountain.  If only, I were 35.

You can see Yuma is hot and tired.  We sat behind the rocks for shade and drank our fill of water and rested. 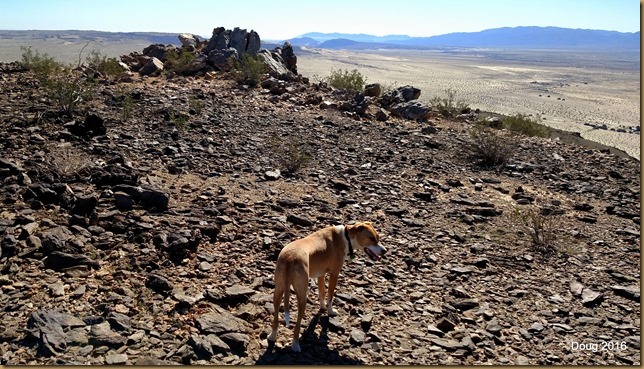 This is looking to the west over to Borrego Springs in the distance below the Ysidro Mountains.  That is Henderson Canyon Road directly below us.  The dark area to the right is the citrus grove and palm trees.  We bought grapefruit at the Seaview Fruit Stand at the end of that grove the other day.

Looking to the east I could see Font’s Point across the desert to the right in the photo.

Here, I am looking toward Clark Lake dry bed and the Santa Rosa Mountains in the background.  Our RV camp is below us, but hidden by the mountain. 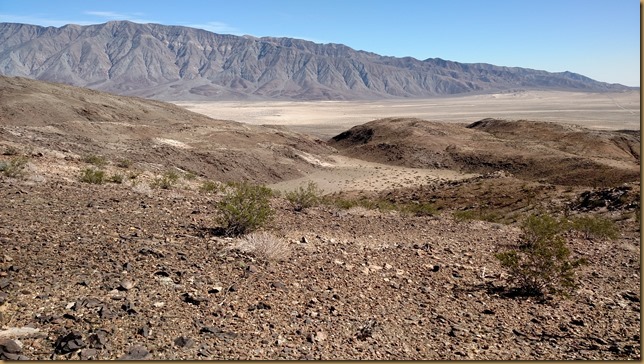 Looking to the north, I could see the rest of Coyote Mountain slowly rising in the distance. 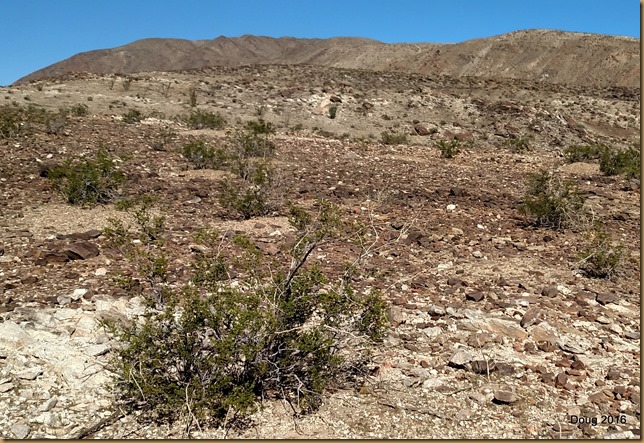 Made it back down and Yuma and I spent the remainder of the day resting.  Around 4 P.M., the winds picked up and the clouds started coming in from the southwest over Coyote Mountain.  Hasn’t really cooled yet, but overnight, we should get some temporary relief.  Tomorrow’s high is to be only 75.  That will be nice. 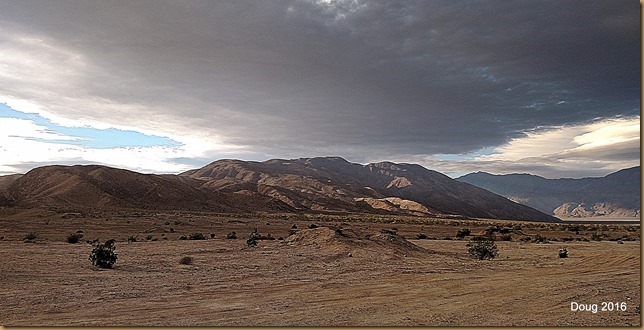