Dolly was mad at me the other day when I said we would move on Sunday, but she didn’t tell me why.  She assumed I knew the Daytona 500 was on Sunday.  I knew it a few days back, but had already forgotten.

Of course, she didn’t tell me why she was mad.  I don’t know why women do that.  I would have changed our move date, if she had only reminded me that Sunday was Daytona 500 day.

Anyway, this morning we drove to Gringo’s gas station to dump tanks and take on water.  When we got there, I found they are closed on Sunday.

I was talking to a nice stranger who told me a place to go.  The stranger mentioned he was heading into town to watch the Daytona 500.  My forgetful brain knew why Dolly was mad now.  Later that morning, I said I was sorry, but the milk has been spilt and there is nothing I can do to make it right.

Got everything done and we headed on to Salton City and made a left on hwy 86 heading to Coachella to the Neighborhood Walmart.

While waiting for Dolly to do the shopping, I took the dogs for a walk and got this photo of a beautiful hotrod sitting in the Taco Bell parking lot. 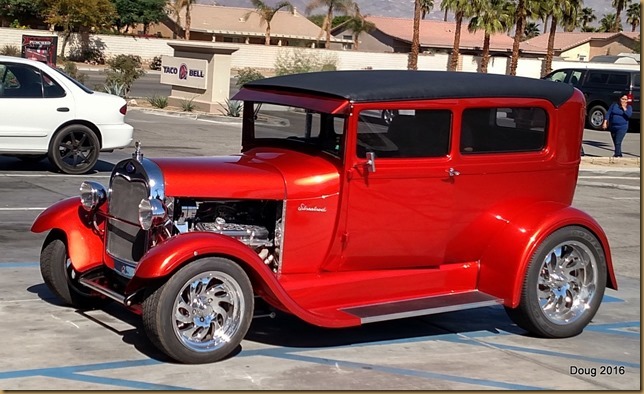 Picked up all the food we need and headed back to Mecca.

We stopped at the gas station in Mecca and I must say that was the busiest place I have ever been.  There were lines at every pump and they had lots of them.

I kept my patience and soon we had two pumps going.  The front one for the MH and the back one for the jeep.  Made good time and got out of that busy place post haste.

The reason we back tracked to Mecca, was because I wanted to take Dolly up through Box Canyon for the view.  I had driven through there last year and liked the views.  The entrance to Box Canyon is at Mecca.

At about 4:30 P.M., we exited Box Canyon at the road to Joshua Tree N.P.  As we climbed the hill, we made a right at the power line road.  Luckily, we found a beautiful spot overlooking I-10.  It is three or four miles down the hillside, so we can see the traffic, but hear no sounds. 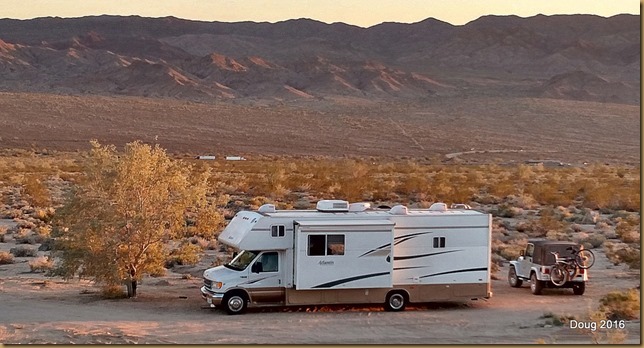 We are all tired.  For some reason move days are tiring.  I think it is the stress of driving in traffic and having to deal with the crowds after a couple of weeks with nothing but solitude.  Coachella Valley is a crowded place.

There is a full moon tonight. 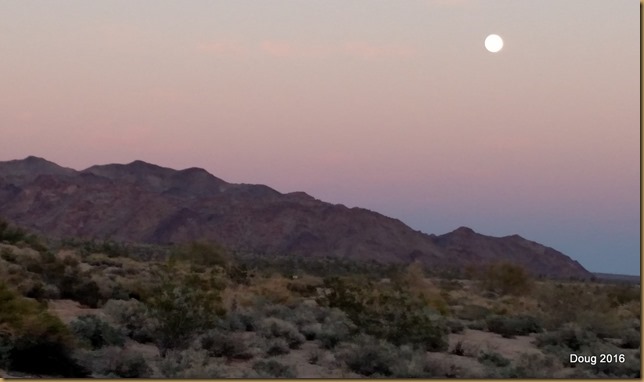 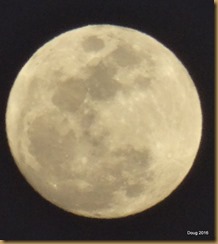