What have I done!

Didn't sleep well last night because of a nagging fear my huge motorhome was stuck in the red desert clay.  When I pulled in last night and made a big circle to park the White Lion, I noticed when I got out, I had left about a six inch indention in the desert floor.  At the time I thought nothing of it.

However, due to my hyper state lately, I started to worry about getting stuck when I went to bed.  I know it was irrational but I couldn't get it off my mind, so I stayed awake most of the night waiting for the sunrise, so I could get out of there.

At 5 o'clock, it was still dark, but I made coffee and ate some crackers.  Yuma and I went for a walk and I fed him. 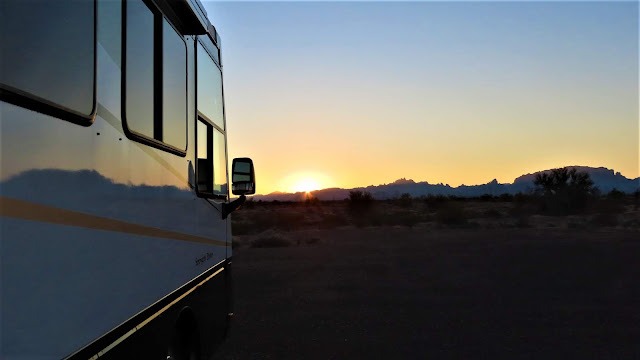 When the sun shined over the Kofa Mountains, I was out of there.  Wouldn't you know it, the White Lion didn't skip a beat, just rolled out.  All that worry for nothing!  I think I'm just hyper right now and need to calm down.

It was only about an hour down highway 95 and I was parked at the entrance to the Yuma Proving Ground taking pictures. 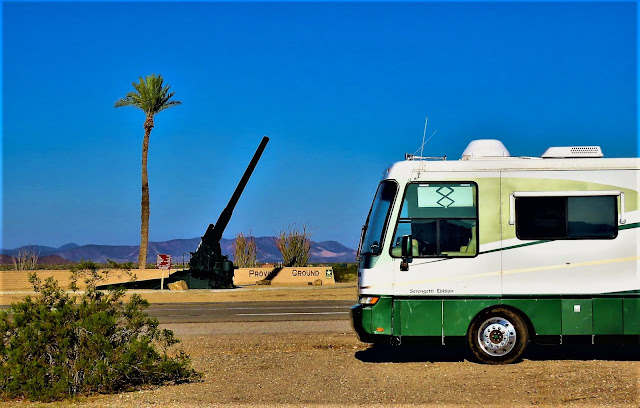 While we were resting for a bit, Yuma tried every comfortable seat in the house.  Except, of course, his bed. 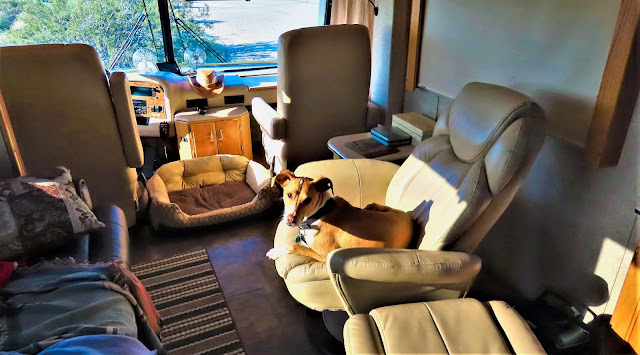 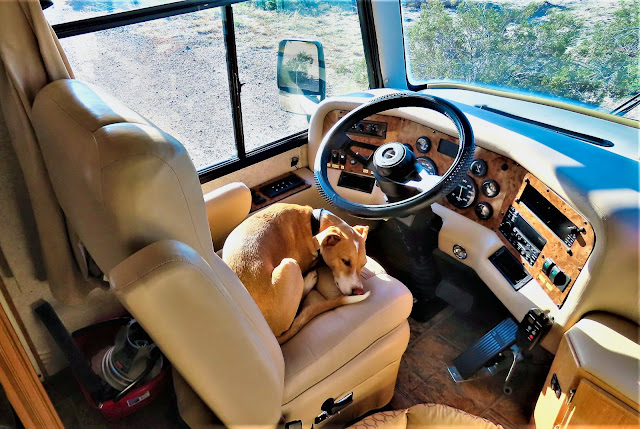 However, Yuma prefers his bed when we're traveling down the road.  That's good!

It was while sitting at the YPG entrance, I made the big decision.  I was going to call the Pilot Knob RV Resort and find out if I could rationalize staying there.  I know I'm tired and there is so much to check out on the White Lion including RV site connections.  Plus, the RV Resort is much closer to Yuma than Ogilby Road where I had planned to go for my boondocking.

Made the call, they had the room and the price I could swallow, so that's where we headed.  Got all checked in around 11:30 and a nice fellow helped guide me into my site #41 with the backend facing the fence to the South.  Be able to use my Dish with no problem.

As the gentleman was backing me in, he noticed that one of the rear tires was low, as in low low.  Now my afternoon turned into a tiring Hell!  Pulled out the air compressor and started pumping air.  Of course, I had to crawl under the MH to get to the inner tires.  Took me two hours to get the four back tires up to 100 pounds each.  I will check them tomorrow to see if any are leaking.  I determined the tires are about five years old.  Not good but not real bad.

I quickly took a shower and Yuma and I walked over to Happy Hour at Bill and Patsy's place.  Ken and Kim were the other two present.

They were definitely surprised when Yuma and I walked up.  Made my day!
We chit chatted about everything and once I get the inside of the White Lion cleaned up, I'll have an open house to show it off.  It was around 5 o'clock when the party broke up and I still had one more thing to do before supper time.

My cheap water hoses leaked so badly, I couldn't leave the water turned on, so Yuma and I made a mad dash to the closest Walmart and back before dark.  Just made it!  Hooked up the much nicer and more expensive hose and no more leaks.  Wonderful!

Now for some dinner and off to bed.  Getting late already.  See you later.