It got cold last night (29 degrees) in the Guadalupe Pass.  First time we have had to endure below freezing temperatures for a couple of months and we don’t like it.  Left about 11 am after it had warmed up a bit, heading 65 miles up the road to Carlsbad, New Mexico.

I had read on the Internet that there were some boondocking places on Dark Canyon Road, between the Caverns and the town of Carlsbad, so that is where we headed.  It is a cloudy and dreary day, but good for traveling on hwy 62/180.  As soon as we hit the New Mexico border, the highway became a four-lane highway.

Wasn’t long before we were turning onto Dark Canyon Road.  My information indicated, the boondocking places were about 10 miles west.  The road is asphalt and goes through open range. 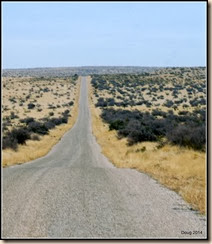 Had to dodge a few cows.

After about 10 miles, I did find the boondocking places and they were just off the road along a canyon.  The area was flat and I felt uncomfortable being in plain view of the road with nothing around at all.  Decided to go on further down the road, hoping to find better spots.  Did see a few caves on the canyon walls. 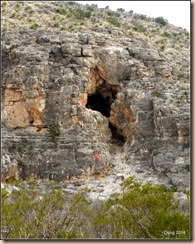 May have to check these out some time this week.

This road goes about 30 miles and then dead ends into Queens Road.  If you go left for another 35 miles through the Lincoln National Forest and eventually right back to the Guadalupe Mountains National Park and into Dark Canyon.  If you go right, you will end up on hwy 285, right across the road from Brantley Lake S.P.  Since we did not find anything that looked good for boondocking, we turned right toward the state park.

After an hours drive through the open ranges on the west side of Carlsbad, we ended up at hwy 285 directly across from the entry to the park.  We had gone completely around the western side of Carlsbad, so we won’t see it till tomorrow when we go in to buy supplies.  We headed into the park to check it out. 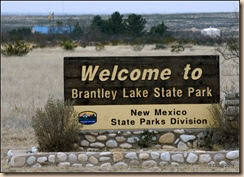 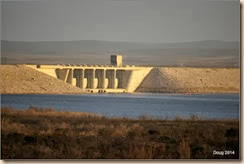 till we got to the Visitors Center.  It was closed, but the sign directed us to go into the campground, pick a site and self-pay.  The fee is $14 a day with water and electricity.  They have a free dump site as you leave.

There looked to be about five empty campsites, as we drove around the circle.  Site 44 is a pull-through site that overlooked the dam and it was positioned such that we have no neighbors on either side of us.  There is a motorhome in front of us and someone is camping in a tent behind us.  The privacy is good.

We got everything all set up.  Checked for a southern view for the Dish; checked AT&T and have two strong bars and Verizon has three strong bars.  All is good for communications, so we decided to pay for seven days.  The weather for the next seven days is supposed to be in the seventies for highs and forties for lows, which is perfect. 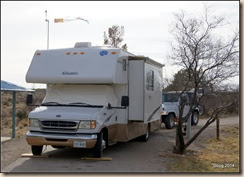 We will check the area out in the jeep over the next week and relax in the nice weather.  Had a beautiful sunset tonight. 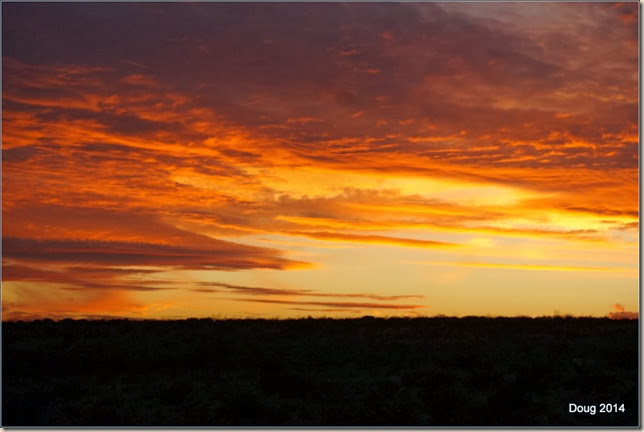