We are now in Palo Duro Canyon SP, Texas.

We left Brantley Lake State Park at 9 am which is fairly early for us.  Took about a half hour to dump the tanks and get on our way up hwy 285 toward Roswell.   As we neared Roswell, off to the west we could see the snow-capped Capitan Mountains.

In about two hours we were driving through Roswell.   I went ahead and filled both the motorhome and the jeep on the outskirts and Dolly wanted to do a little souvenir shopping so we stopped in town.  Didn’t see any UFOs but we were looking for them.

Dolly did some shopping and we had a lunch at McDs and by noon we were on our way to Texas.

Hwy 70 from Roswell to Clovis was in plains country.  Lots of space and a number of empty buildings along the way. 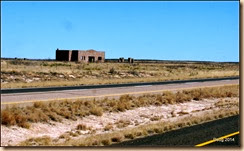 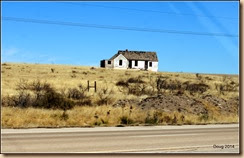 Somehow, we missed the cut-off to hwy 60 in Clovis, NM that goes to Canyon, Texas and went straight north through town.  Once we figured that out, we looked for an alternate route to get us back to hwy 60, because I wasn’t going back through Clovis.

We went straight north to the town of Broadview and turned east on hwy 241.  This is a two-lane country type road that went straight east and became hwy 1058 as we crossed into Texas about ten miles down the road.  We lost an hour, as we moved into Central Standard Time. 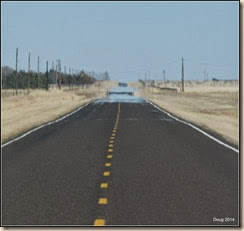 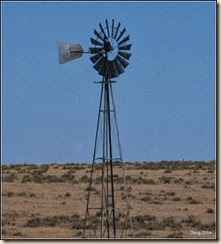 Passed a lot of tumbleweeds blowing around and tons of them were against the fence to the north. 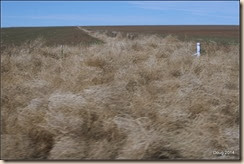 Finally reached our destination around 5:30 pm and grabbed a couple of photos of the view from our campground near the entrance to the Palo Duro Canyon State Park.

Tomorrow, we will explore this area more closely.