We decided not to go anywhere today.  After breakfast, I drove into Carlsbad and got a haircut, beard cut and mustache cut all in one.  We will be going home soon and I couldn’t let my family see me like this. 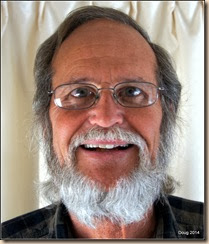 Instead, they will see this. 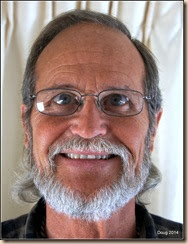 I still have the locks, but the sideburns and beard are groomed now.  You can see my ears now, too.

We did take a little excursion to go see the lake just northeast of us.  It is named Lake McMillan and on my Microsoft Streets and Trips map, it looks bigger than Brantley Lake.  The Pecos River goes into this lake before dropping into Brantley Lake.  I did notice that there were no roads going to the lake and sure enough we did not find any.  And the lake must be high on a hill because we could not see it.  We could see a large berm, but I did not want to take Dolly up any of the rough roads that went up there.  We did see a large swampy lowland that may have been the Pecos River basin, but it did not have any roads either.

That gray you see down there is not water, it is gray reeds or grass out there.  There was a fresh road going across it, but I did not dare try it in fear of sinking into the ground.  Maybe the lake is behind those hills over there.  Maybe the lake is the swampy lowland and there is no water in it right now.

Did run onto some crude oil containers that are not in use anymore.

Dolly and Fergie looked in one of them to make sure it was empty. 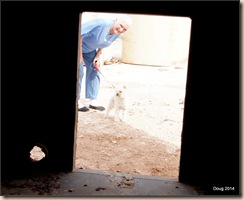