This morning we decided to drive the 60 miles down Queen Road back to Dog Canyon in the Guadalupe Mountains National Park.  This road goes from Hwy 285 right across the road from the entrance to Brantley Lake State Park.  We drove part of this road, when we took Dark Canyon Road the day we arrived.  I just had to find out what it was like to drive the entire road till it came to a dead end at the Texas border.

The road started out following a wash through small mountains just west of hwy 285.  This one actually had water running through it. 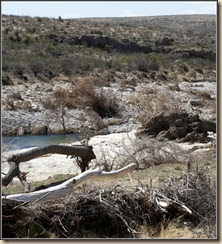 As we left the small mountains and came out of the wash, a large valley was in front of us.  This area has a number of gas refineries in it.

There was wind today, so it looked hazy in the distance. 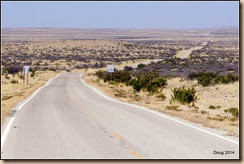 This guy was resting right next to the road. 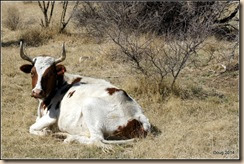 After about 35 miles, we started up into the Lincoln National Forest. 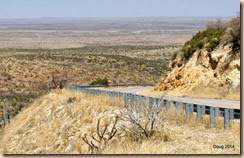 Someone made a wrong turn! 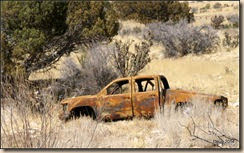 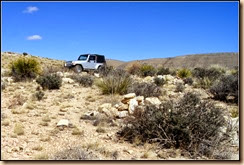 We found out why the road is named Queen.  There is a very small community by that name.  Had an RV park and a fire station.  Also, there was a monument to the Flying Paper Boy. 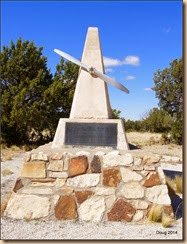 The Guadalupe Mountains ran along to the east of us as we traveled south.

Finally, the asphalt ended right at the Texas border.  Just ahead is Dog Canyon. 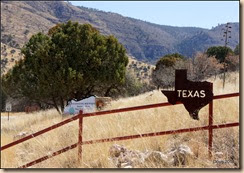 They don’t allow dogs on the trails, so we didn’t hike into the canyon.  The trails lead up to the same mountains as the trails on the east side do.  The mountains don’t look as pretty from the west side as they did when we were camping at Pine Springs Campground last weekend.

Yesterday, as we were driving into the campground, I saw an animal on the side of the road for a brief second.  It looked like a small deer or a very large rabbit.  I tried to point it out to Dolly, but it was gone into the brush before she could see it.  She accused me of seeing things.

So, this evening at about the same time, I headed back down the road with my camera to prove it to her.  I didn’t really expect to see it at the same spot, but Voila, he posed for me! 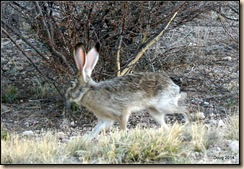