Had a very nice quiet night here behind the mall.  Didn’t hear a sound until the garbage truck came and emptied the large container next to the building.  It was 6 a.m., so it was almost time to get up anyway.

Well, I’ve got till one this afternoon to kill, so after my coffee, blog reading and breakfast for both of us, I decided to check out Sprague’s Sports and Indoor Shooting Range. 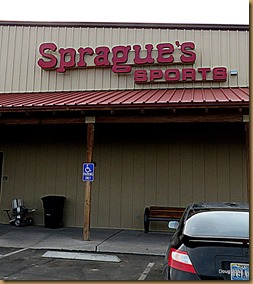 Always had an interest in guns and recently obtained my Concealed Carry  permit in the state of Illinois.

Thought we would drive over there and see what kind of semi-automatic pistols they have in Yuma, Arizona and see if they are less expensive than Illinois.  They’re not.  About the same, and I learned that to buy a pistol here, I would have to have it mailed to a gun shop in Illinois   That ended the idea of buying one here.  I can just wait till I get home, if I’m still interested.

However, the store was quite interesting.  I couldn’t stop taking photos of all the animals they had on the walls in there.  I like shooting animals, but only with a camera.  Would never shoot anything to hang it on a wall. 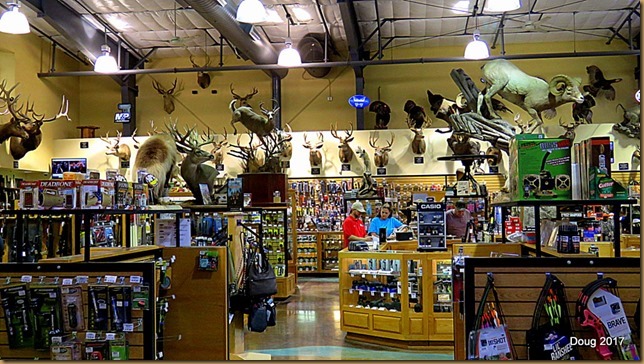 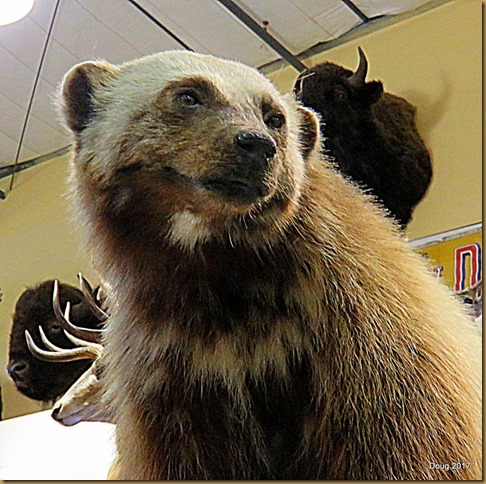 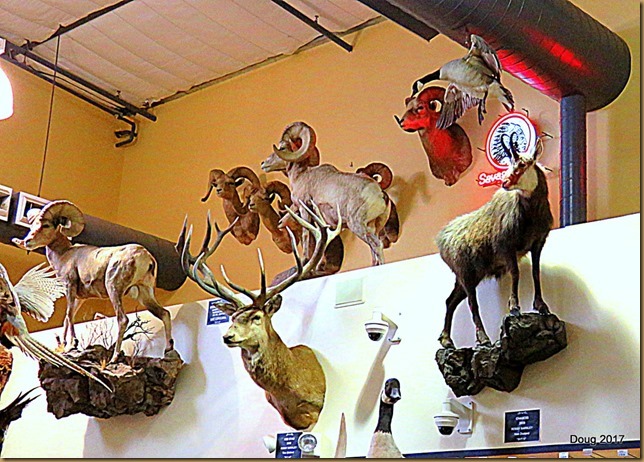 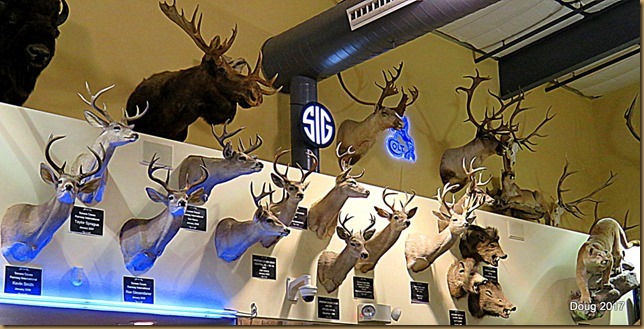 We got back to the RV about 12:30 and went right over to check on my part.  Took Tony awhile, but he finally tracked it down.  I gave Vic a call and let him know I had it.  He told me he was on another call and it would be about an hour and a half before he could get to me.

At 2;30, Vic’s red truck pulled up and he had the part installed and tested in less than a half hour.  I am now ready to get out of the crowded city of Yuma.  I so rarely drive in a big city and don’t have the patience for all the traffic.  Yuma is a very busy place.

We were on our way at 3 p.m. and I knew exactly where I was headed.  About 20 miles north of Yuma is Mittry Lake.  Beautiful place, but has limited places for RVs to park.  I was hoping there would be one.  The wind has picked up and one thing Yuma has plenty of, and that is sand.  Gets into everything. 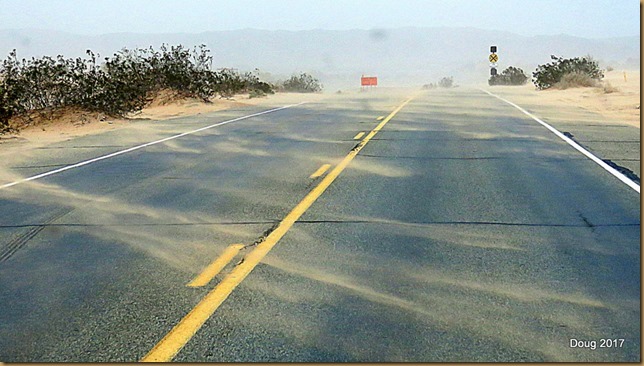 As we drove onto the dirt road leading into the lake from the south, it didn’t look bad.  With the reeds lining the road, it was quite beautiful.

I see the lake through the reeds.

I knew the place I wanted and it was almost exactly half way around the east side of the lake.  It is the same place I stayed two years ago.

It was available.  No one was in the site and no chairs or tables holding it in reserve.  Yuma and I pulled in and made it our home for the next week or so, I hope.  It looks like rain and it is quite windy, so best hurry to get things set-up. 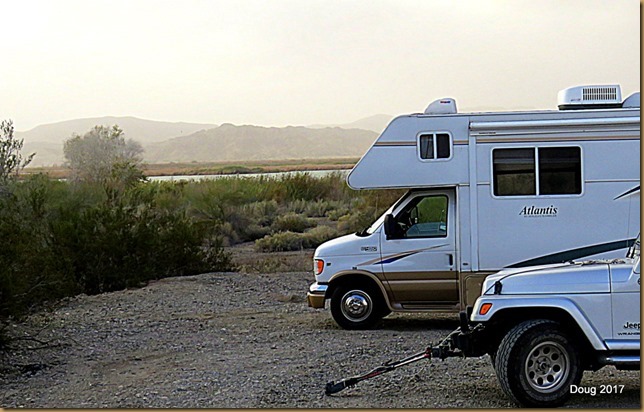 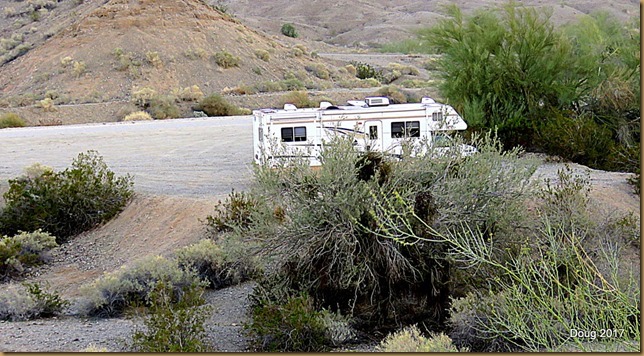 That year, there was a fire and I had to leave in the middle of the night.  Here is the link to that night.

There is a canal right across the road.  On the other side is the Yuma Proving Ground.

Yuma is having a ball running and checking everything out. 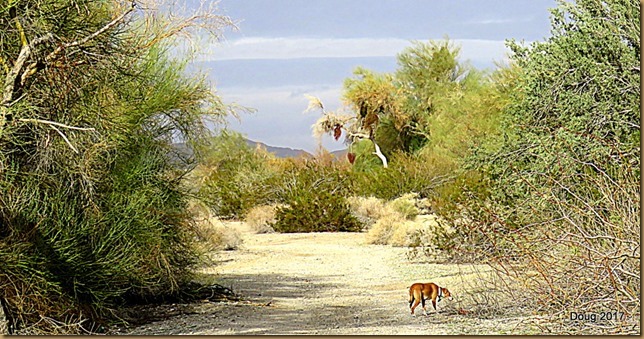 Ran so fast fast past me, I couldn’t keep the camera focused on him. 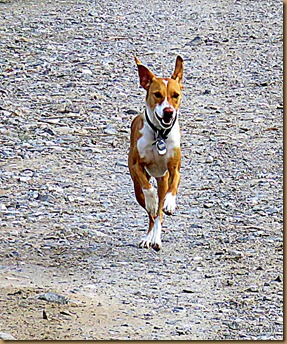 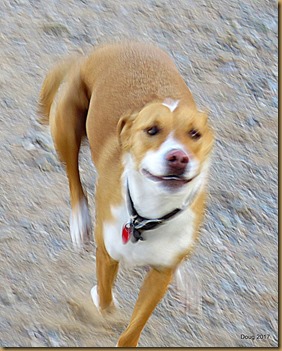 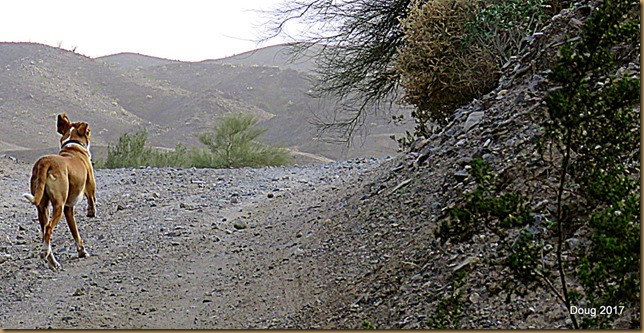 The wind is blowing his ears.

Tonight is Gold Rush, so I have to get the TV and Dish up and running.  Hopefully, the rain doesn’t ruin my reception.  Dish isn’t good in rain storms.

Sure enough, here it is 6:45 and Gold Rush will start at 7 and guess what.  It is pouring down (severe rain) and my signal is going in and out.  What a BUMMER!  Never rains in Yuma until I want to watch Gold Rush! 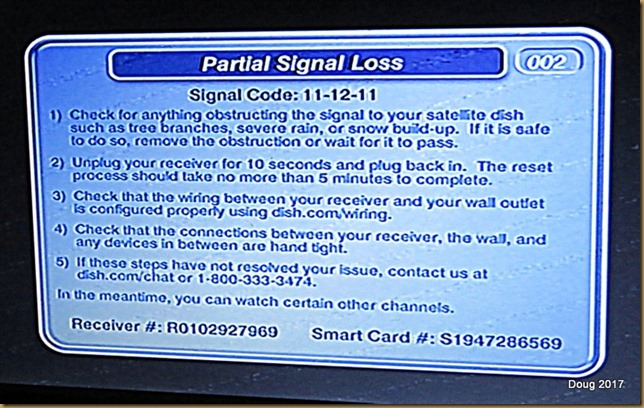 Now, I have Complete Signal Loss!  Oh, what is a guy to do?   Luckily, each week they show older episodes before the new one of the week.  May have to wait a week and catch two episodes.  So, not all is lost, thank goodness.

Guess, I will finish my blog, have a little something to eat and call it a night.  I can fall asleep listening to the rain on my roof.

Yeah!  TV came back on at 7:05.  I love it.  I knew Yuma wouldn't let me down.  The severe rain has passed and all is good in the world once again.  Made it through the whole hour.  Good.