Organ Pipe Cactus National Monument is not a place you stop in as you drive by on the interstate.  Oh, no!  You have to make a definite decision to go there.  It is about as far off the beaten path as you can get.  It is on state highway 85 and it dead ends at Lukeville, on the Mexican border.

The 18 mile drive from Ajo, down hwy 85 is beautiful.  The Ajo Mountain Range strings along the East side of the road while the Valley of the Ajo is on the West side. 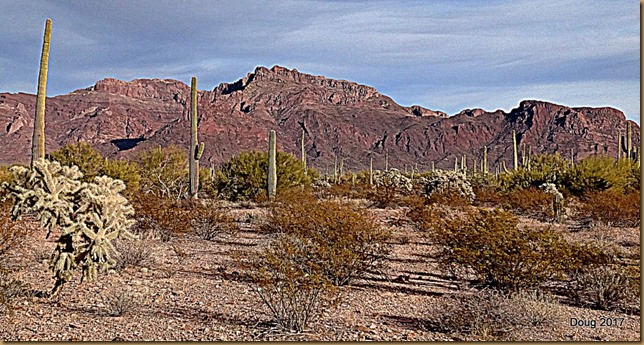 with Bates Mountains way off in the distance. 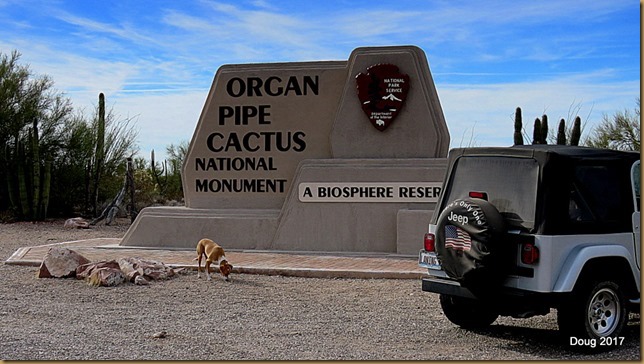 The reason I made this special trip was because last year, Dolly, Fergie, Yuma and I started down this road, but about 10 miles in, we ran into two suspicious acting guys in a car that passed us.  They pulled ahead of us and stopped; then backed up towards us and stopped.  Then they went about quarter mile and stopped again.  We had waited, hoping they would just go on, but they didn’t.  As we approached, we stayed further back, but they started backing up again and stopped short of us.

The last straw was when they went about a half mile up in the mountains and stopped.  We had stayed back.  One of the men got out of the car and walked into the desert and the car went on.

This is a one way road that one cannot easily pass on.  Our “this does not feel right” flags were at full staff.  We made the decision to turn around and go back the wrong way on the one way road.  This is a remote area, so we were lucky and did not meet anyone coming towards us the entire way back.

Well, this year, Yuma and I were determined to drive those 42 miles of bad road.  This loop was closed for many years, because a Park Ranger was killed. 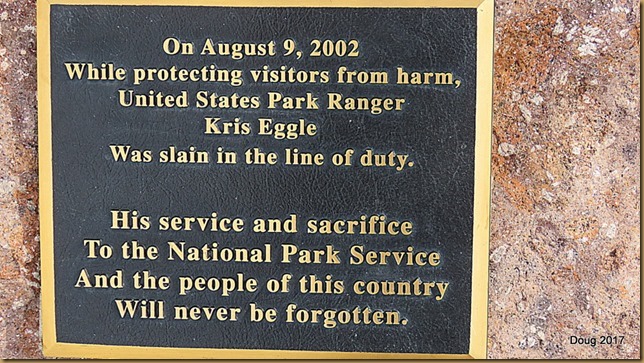 I’ll be candid.  The views from this road were not spectacular.  It was not worth the 42 miles of bumpy and jolting ride Yuma and I endured.  I would highly recommend the Ajo Mountain Loop that is East of the Visitor Center.  Much shorter and more beautiful.

With that said, here are some of the photos taken of Puerto Blanco Mountains as we drove through.  It is a partly cloudy day, so some photos are in full daylight, while others are in shaded light.

I took many more, but these will give you an idea of what the countryside looked like.  Some photos will be of the same mountain in the range as we circle around. 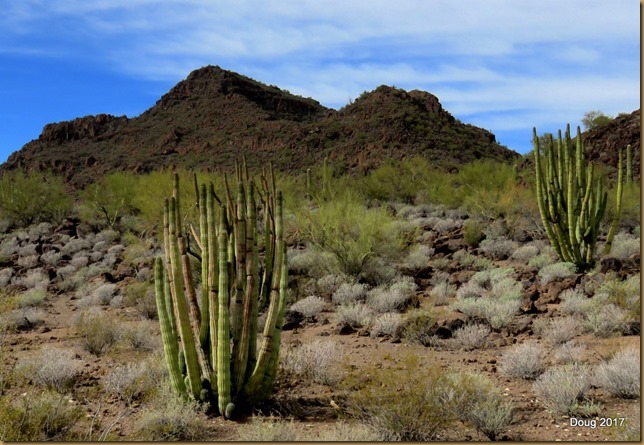 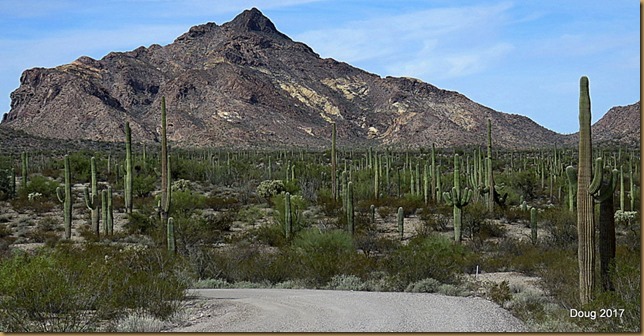 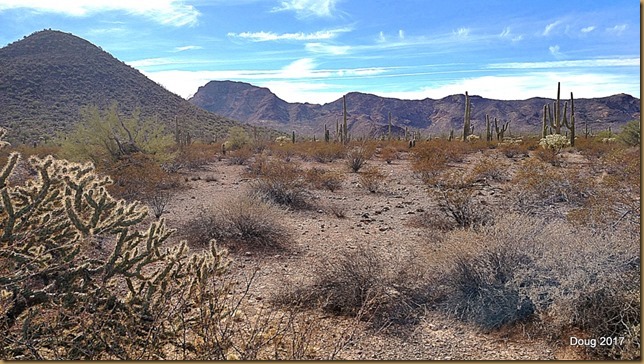 You can see why it is difficult to pass. 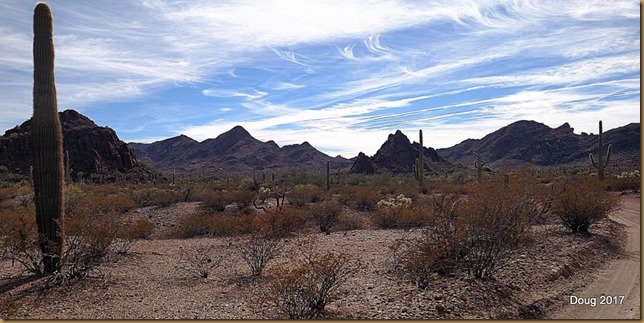 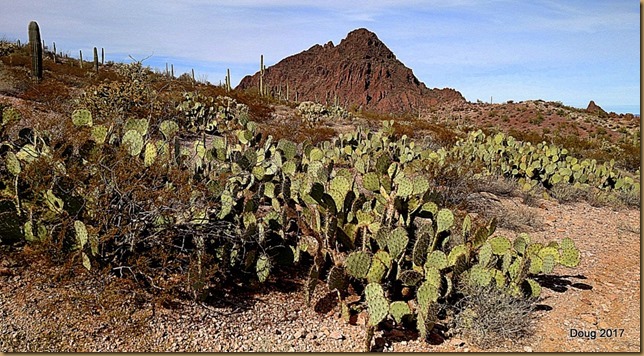 This is definitely remote country.  Just this road.  Horseback or walk are the two choices, if you leave this road. 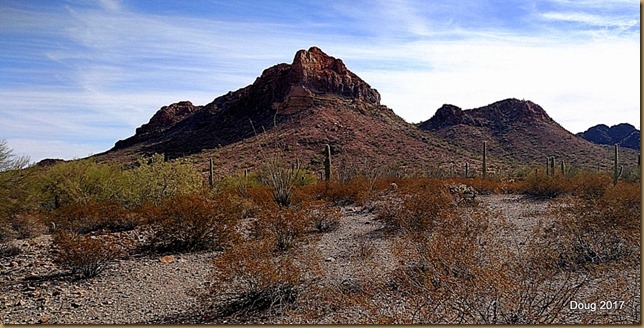 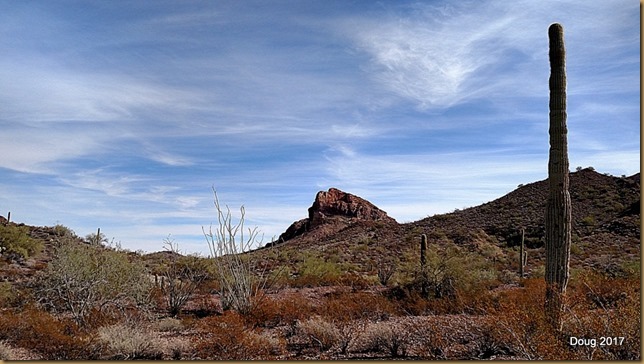 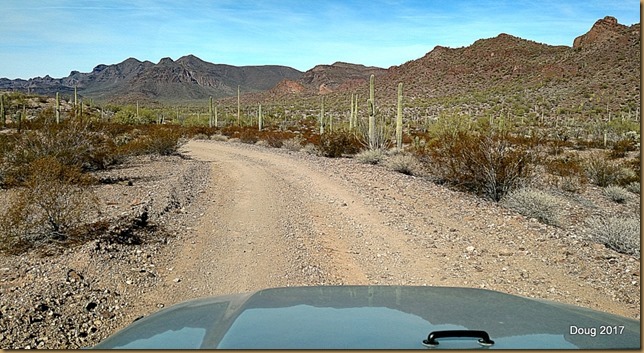 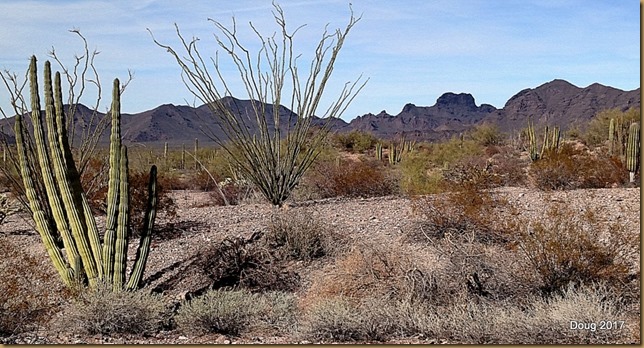 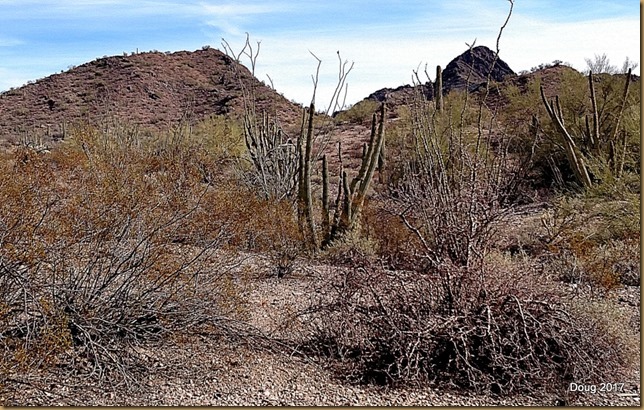 Stopped at Bonita Well.  Had an old run down corral too.  Yuma almost got locked in. 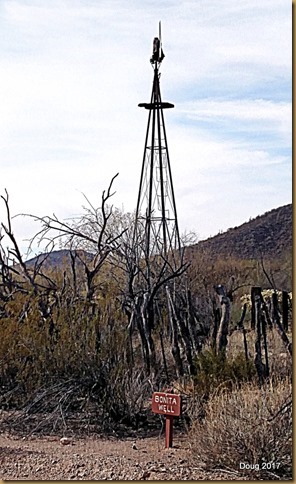 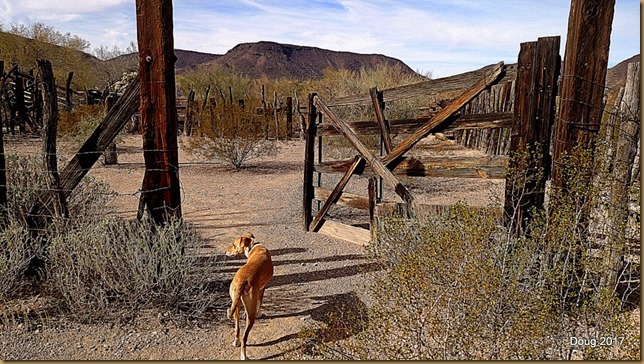 As we circled around, going North, then West and finally South, ending up right on the Mexican border.  Here is Obama’s wall.  I’m sure it will soon be much more impressive once Trump takes office. 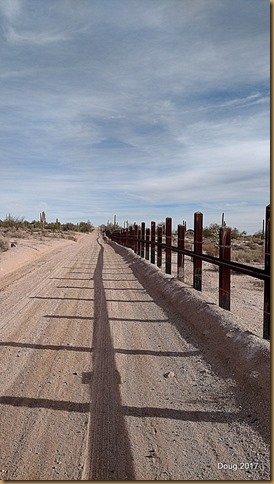 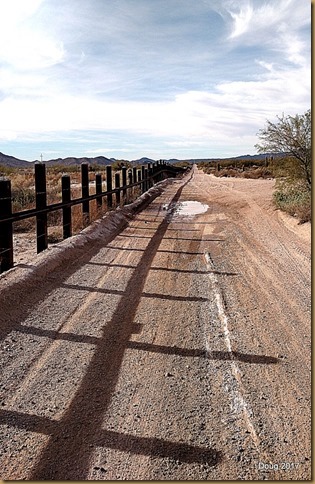 There is a truck driving by on a nice highway in Mexico and here I am on a dusty, bumpy rough road.  Maybe, we don’t have it better than the Mexicans. 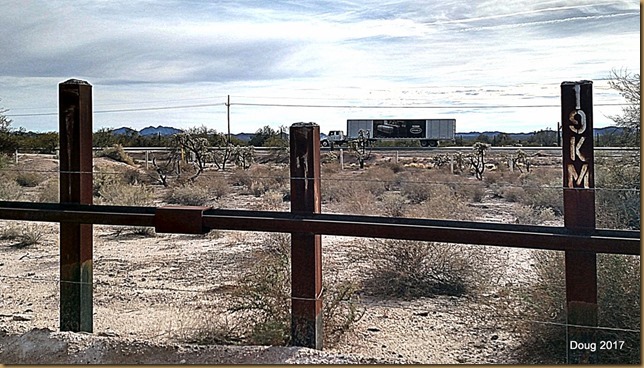 Another reason, I came back was to see this pond named Quitobaquito in the Quitobaquito Hills on the Mexican border.  As you can, there is a difference.

January 2017 – No hanging tree across the pond 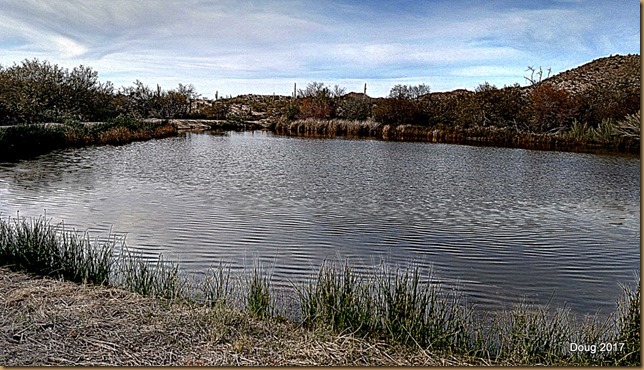 January 2016 – Tree hanging out across the pond 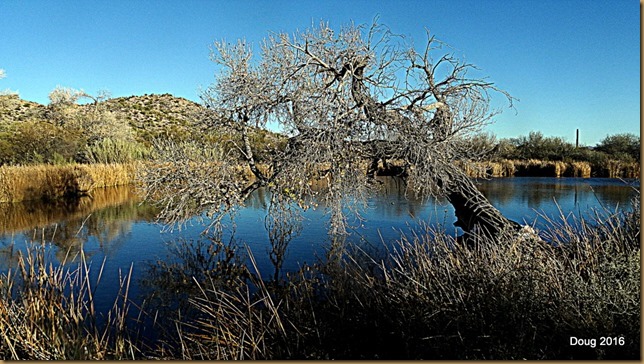 With age and probably kids climbing out on it, it just fell in the pond this past year.

Ah, finally back home at camp.  Took me five hours to make this short road trip.  Walked another four plus miles too.

Sunrays just topping the mountains to the East with the Moon rising. 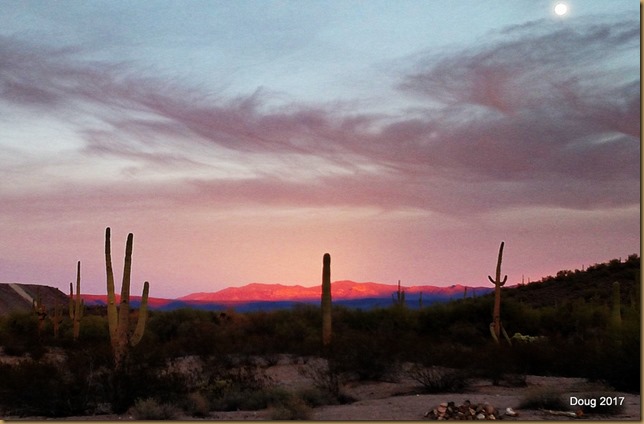