Didn’t go into the Casino last night, but I could hear the music.  Someone around here shot off fireworks around mid-night and poor Yuma was scared to death.  He jumped off the bed and curled up in the hallway panting.  It wasn’t till around 1 A.M. that he felt save enough to come back to bed.

Woke up to the patter of rain again.  Didn’t last too long, but it remained cloudy and cool till around noon.  That’s when I crawled under the MH looking to see if I could find the propane leak.  Last year, my son-in-law, Evan and I fixed a leak and I thought maybe a fitting had come loose.  The original piping had gotten smashed by the weight of the MH coming down on it and was leaking.

Sure enough, that was where the leak again occurred.  It wasn’t a loose fitting though.  The entire fitting broke off the hose by the constant motion of the MH going down the road. 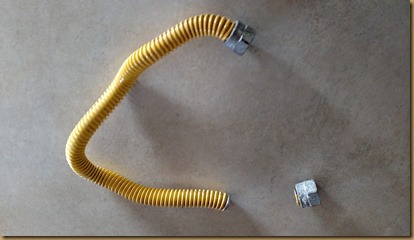 Tomorrow morning, I will run to a hardware store and replace the hose with a better one.  Should be about $10.  That is a lot cheaper than taking it to a repair shop and less time-consuming too.  Let you know how this comes out in tomorrow’s post, if I don’t blow myself up.  This is the first good thing to happen today.

As I was laying around the MH, I decided I would try to start the big generator once more.  When I tried to start it before leaving, it would grind, but not start.  Well, it turns out that even though the MH engine would start, the engine battery was not charged enough to start the generator, thus the grinding sound.  The MH had been sitting for three months and the engine battery charge had gotten low.

Well, after 1840 miles of the alternator charging the engine battery, it was ready to start anything and when I pushed the starter button on the generator, it started right up.  Ran it for a couple of hours to cool the icebox into a fridge once more.  That is the second good thing to happen today.

Didn’t even look into why the inverter acts up when connected to the MH electrical system.  Will do that when it is warmer since it is not a big problem and I have a work-around.

Saw this cute slogan on the back window of a toad this afternoon, while on one of my many walks with Yuma.  He just loves to walk around and sniff every bush he sees. Also, saw these huge cactus along the fence around the outdoor arena they have at the casino. 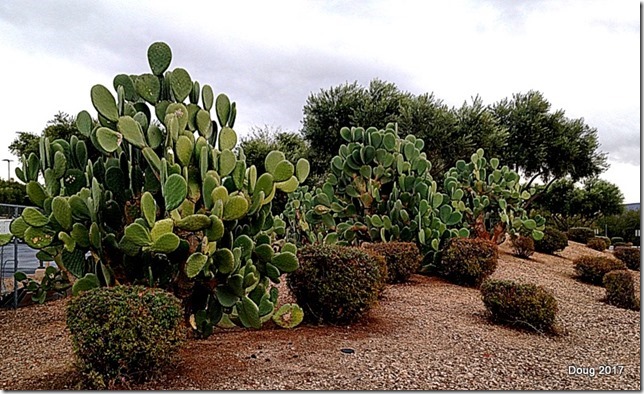