One Comes Early; One Comes Late

Yesterday, late in the afternoon, Dolly texted me and said my medication was ready.  Hadn’t expected it till around noon today.  Sure enough, I went in the Walmart and stood in line with the rest of the old codgers and when my turn came, she pulled out my bag of medicine and handed it to me.  That was sure fast.  Hopefully my RV part will be just as fast.

Stepped outside and could see it was cloudy and hazy off to the east.

Later in the morning, took Yuma for a walk around the sand area east of our camp at Walmart.  I could see blue skies to the west.  The Walmart is a big super center and is always crowded with customers. 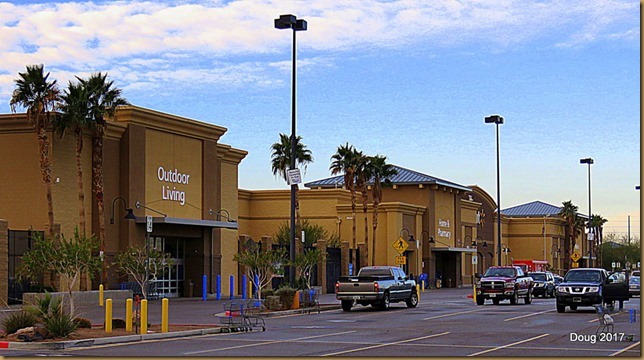 The bales of hay are used to keep the sand from blowing into the parking lot. 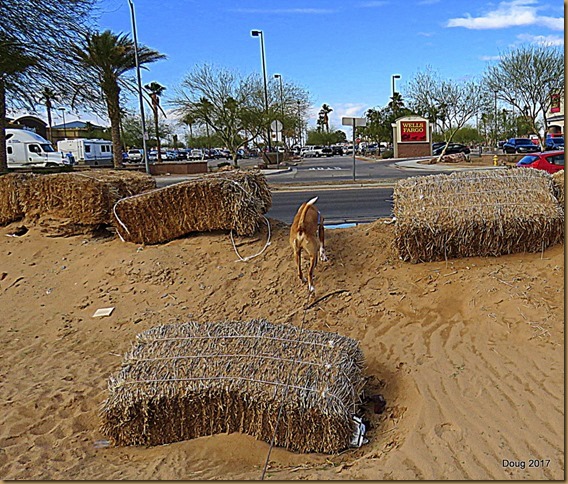 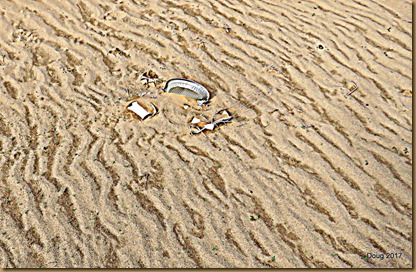 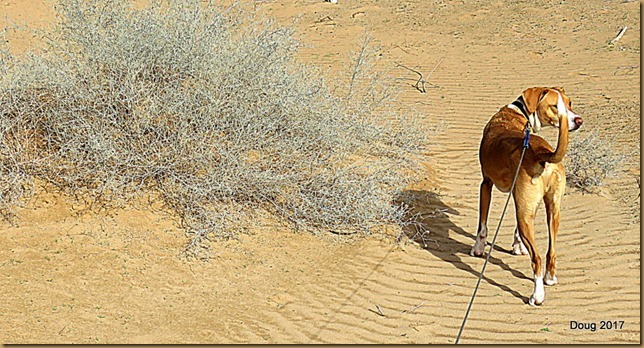 Interstate 8 is about a quarter of a mile north of the Walmart.

After coffee and reading my blogs, I fed Yuma and had cereal for breakfast.   Slowly, I packed everything up for travel.  There wasn’t much.  Around 11:30, we headed back a couple miles to Al’s RV Service and Supply store to see if my part had arrived.

Got to the store and asked Tony, who was at the counter, if my part had arrived and he started looking into his computer for the answer.  The answer wasn’t what I wanted to hear.  Tony said it would not arrive until tomorrow around noon.  As I was walking out of the store and getting ready to call Vic, I ran right into him coming into the store.

Vic had said that it may be Friday, so I decided to stick around one more day in the big city of Yuma.  Vic said that I could stay overnight in the area behind the store.  If it doesn’t come tomorrow, I will just get the part number and leave.  I can order it when I get home and put in myself.

Here’s my new digs for the night.  Al’s store is in a fairly large shopping mall and I am staying behind the stores where the deliveries are made. 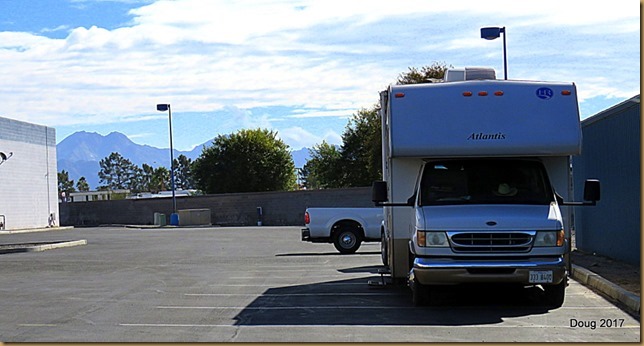 You can see my MH way back on the left next to the blue building. 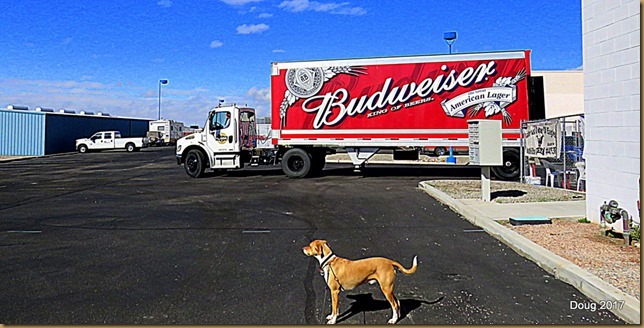 I have a load of laundry, so this would be a good day to accomplish that task.  Dolly would faint if she knew that I went four weeks without washing the sheets.  It’s not that bad though.  I sleep on one side of the bed for two weeks and the other for two weeks, so it wasn’t really four weeks.  But, I’m sure it is not the way Dolly would do it.

About 3:30, I detached the Jeep from the MH and Yuma and I headed across the street to the East Yuma Laundromat. 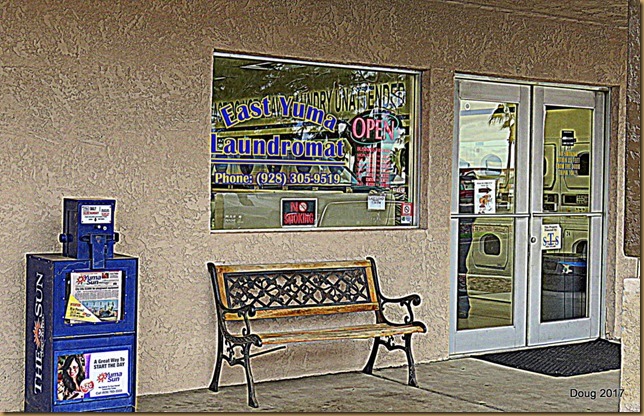 Nice place with plenty of room and not very crowded.  The Quartzsite crowd should have it so lucky. 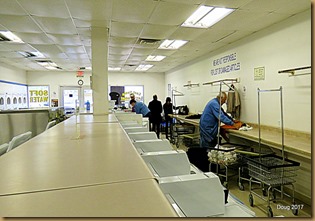 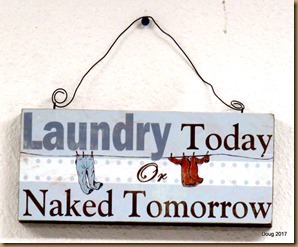 While wandering around the mall waiting for the laundry to get done, Yuma found a new friend.  This guy is huge and only seven months old.  The owner said it is a Great Pyrenees puppy.  Yuma could have played all day with him. 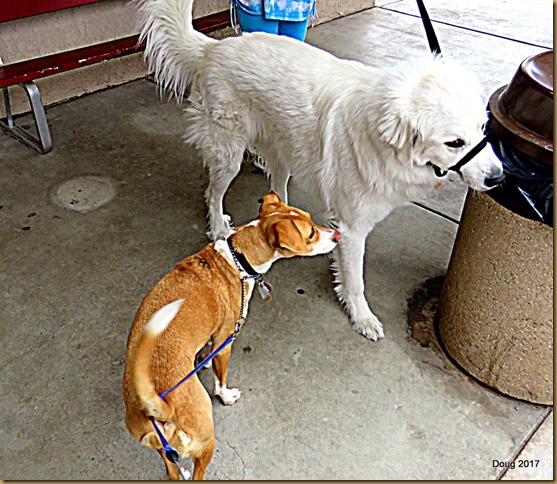 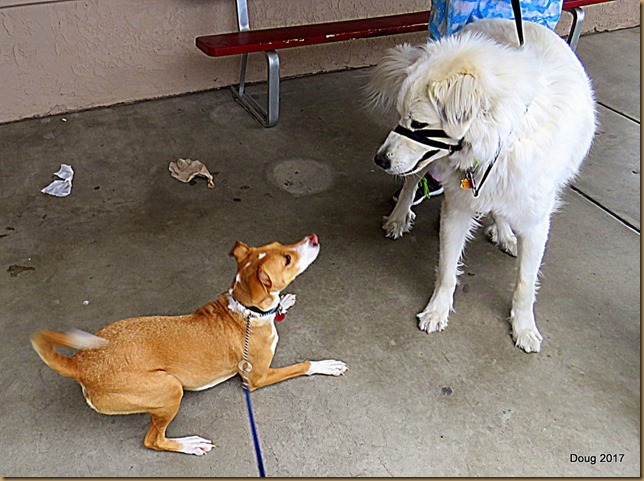 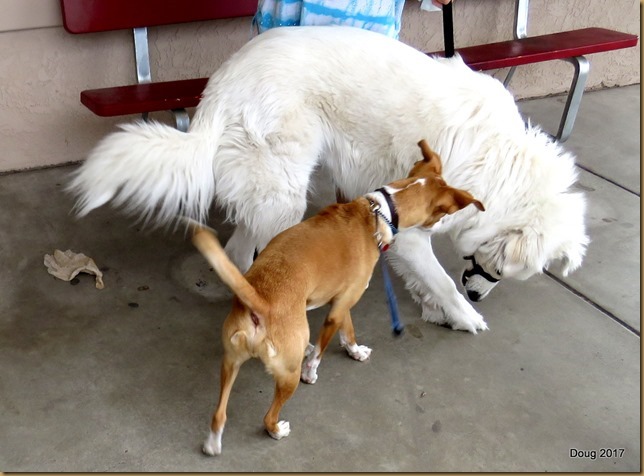 When we got back to the MH, we did a lot of this.  That Yuma is such a sweet fellow.  Walked over four miles today and for some reason my right ankle is killing me.  May have to change into boots.  Shoes aren’t cutting it.  My beard is getting full.

Finished the day with a huge sandwich and a couple of Pinwheel cookies.  Should be very quiet back here tonight.  Just me and the burglars.  Oh, and my two good friends, Smith & Wesson.