Didn’t sleep well last night.  I was so tired after finishing my blog, I went straight to bed without eating anything.  All I had was two bowls of cereal all day and I had lots of exercise.  My stomach kept growling but I ignored it.

Got out of bed this morning at 7 a.m. and made two scrambled eggs and two pieces of bacon and milk.  After finishing that, I had OJ, half a grapefruit and a nutrition bar.

Took Yuma for a last walk and I could tell it was going to be a sunny and warm day.  Just beautiful for my last day here.

Then I felt better and started cleaning and packing in hopes that my medication was sitting at the post office waiting for me to pick it up, so I could be on my way.  I’ve stayed 14 days at one camp.  That’s the limit and it is also, the longest I have ever stayed at one camp.

Still had packing to go, but at 9:30, it was time to check the mail.  Yuma and I jumped in the Jeep and sped into town.

Running down Darby Well Road with the pit pile running along side us. 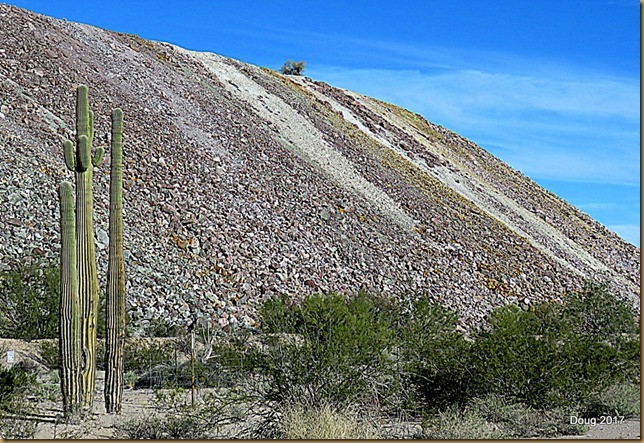 When I stop at the stop sign for hwy 85, I see the Ajo Mountain Range straight east. 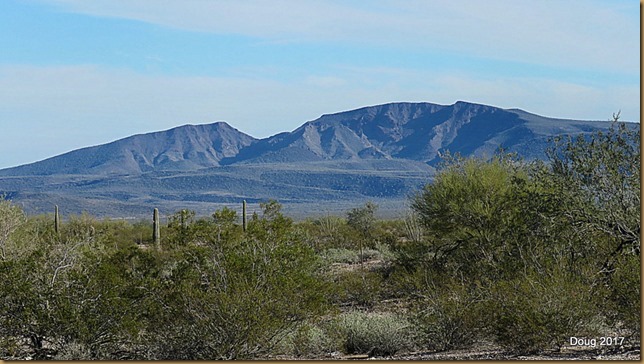 This is the view as I head the three miles on hwy 85 north into Ajo.

Ajo is an artsy town, in case you didn’t know. 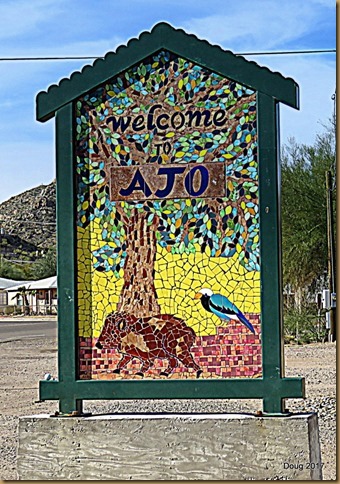 No one was at the counter, so I rang the little bell 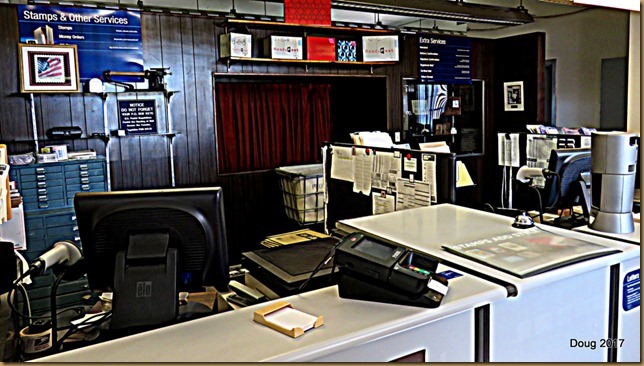 and a lady came to the counter.  Told her I was looking for a General Delivery.  She told me they were still sorting the mail from the long weekend and to come back in an hour.

Sooo, we headed back to camp and finished more packing.  At around 11 o’clock, we jumped back in the Jeep and sped off to town again.  This time there was a different lady at the counter, and I told her I was expecting a General Delivery package and gave her my name.  She went in the back room and rummaged through a stack of mail and came back with my package.

The deed is done and I am now ready to split Ajo for bigger places.

As I was leaving the Ajo Plaza area, I saw this alley with a bunch of murals, so I had to stop and grab some photos.  Here are murals in the Artists Alley. 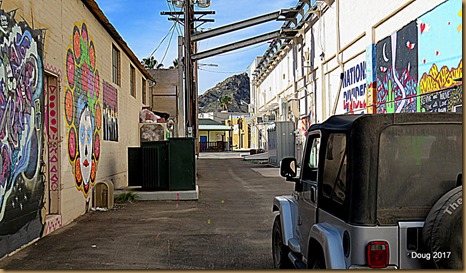 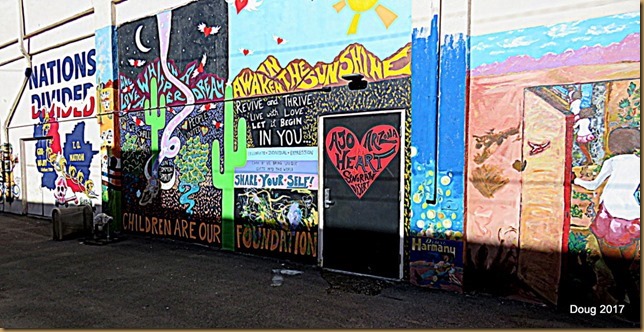 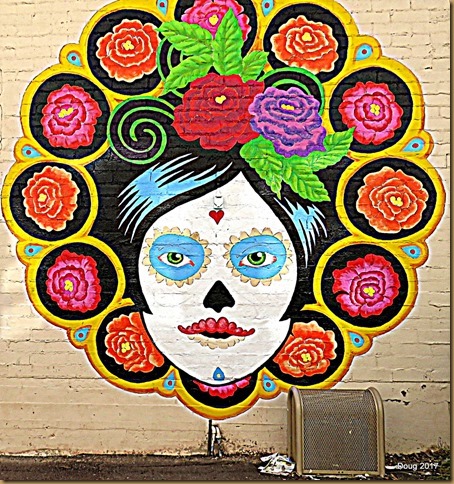 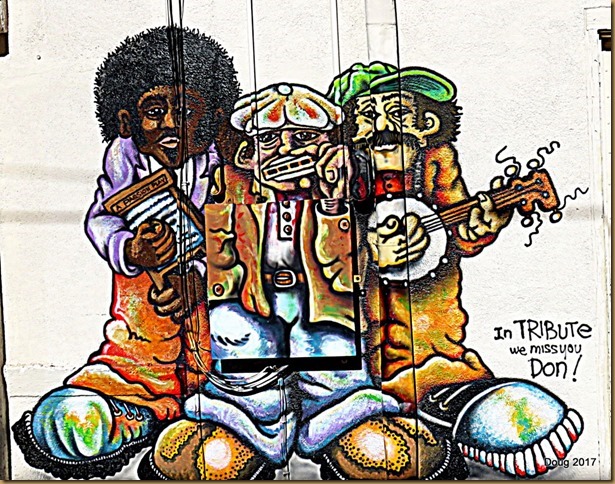 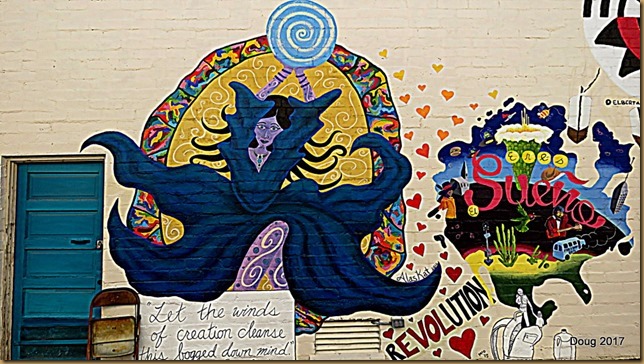 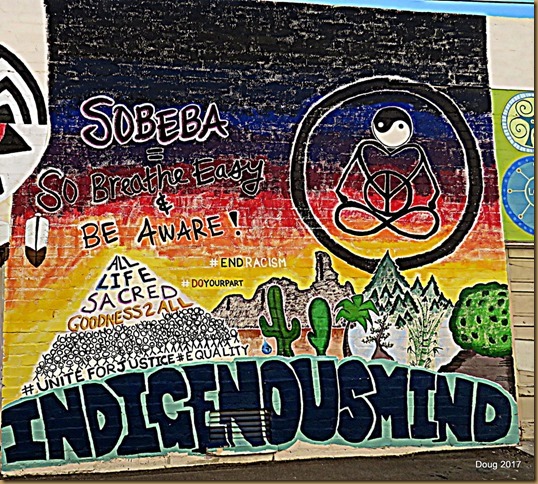 Yuma and I went back to camp and finished packing and hooked up the Jeep and we were off around 12:30 p.m. back into Ajo to dump tanks and take on fresh water.

Last look at Black Mountain as we leave.  I’m going to miss this place. 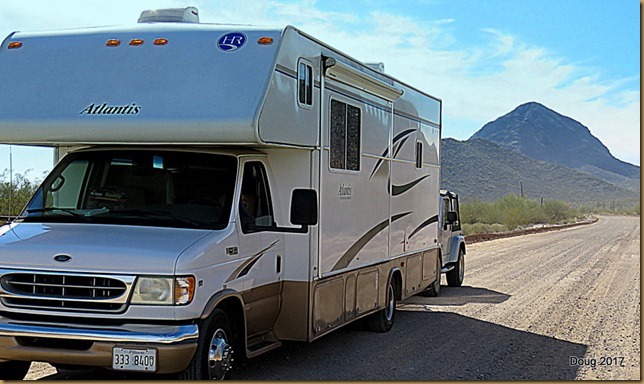 The propane tank was still 3/4 full.  Still had plenty of water and the tanks were still in the green zone, but the job needed to be done.  Took us one hour to get the job done and put 20 pounds of air in the one tire that seems to have a problem.  May have to look into it if I lose another 20 pounds in the next two weeks.

So, at 1:30, we were heading north on hwy 85 out of Ajo and into the Barry M Goldwater Air Force Range.  It is a large bombing range between here and Yuma.

One last Border Patrol check point to make sure I don’t have any drugs or aliens on board.  The young man at the check point kept me there for about five minutes gabbing about his dogs and cats and was just being so friendly. 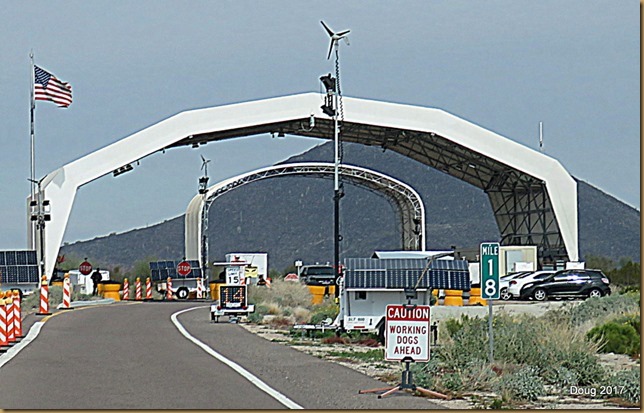 Then I happened to look in my rear view mirror and I saw why.  There were border patrol men with dogs walking all around the back of the MH sniffing for contraband.

Luckily, they didn’t find anything suspicious and soon the nice young gabby guy asked if Yuma and I were American citizens.  I said “yes” and he said we could go.  I guess I shouldn’t have been wearing my cowboy hat with the grubby beard.  I knew I looked like the suspicious type.

I have been looking at the weather forecast for the next week and debating whether to go north to Quartzsite or west to Yuma.  It is going to be on average 5 degrees warmer in Yuma, so Yuma it is.

My tentative plan is to stay on the northeast side of Yuma near Mittry Lake and just drive the 60 miles up to Quartzsite for the Bloggerfest and any other activities I’m interested in.  Haven’t put that in concrete yet.

When we arrived in Gila Bend, forty miles up hwy 85, we turned West on I-8 with a destination of the Mittry Lake on the Northeast side of Yuma.

I-8 is  wonderful highway and we made good time.  Saw lots of trains. 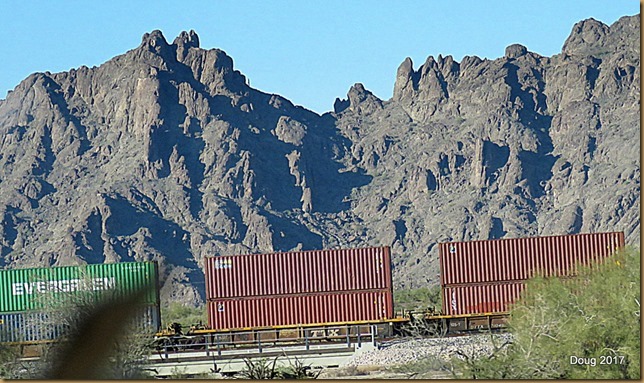 Arrived in Yuma right at the 5 o’clock rush hour.  Stopped at the Fortuna Road exit and filled the MH.  Glad to see gas at $2.20 a gallon, because  I put in $77 worth.  Had about an eighth of a tank left.

Arrived at our camp at 5:30 just as the sun was setting. 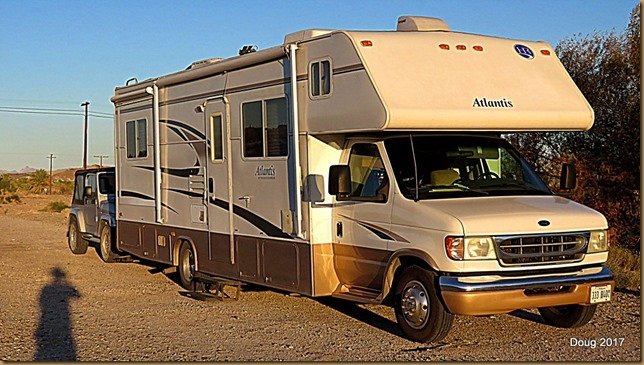 I didn’t drive into  Mittry Lake road, because from past experience, I know it is very wash-board and I’m not up for it.  Plus, there may be no camps along the lake and there aren’t many places to turn around towing a Jeep.

So, I am staying just west of the Senator Wash road just across the road from the Water Works headquarters.  There is a big lot alongside the water canal that they allow RVs to stay free.  Tomorrow morning, I will evaluate things and make a final decision as to where I will camp for the next several weeks.