This morning at almost exactly 6:30 a.m., I began to hear raindrops hitting the top of the RV.  Don’t hear that sound very often.  Looked out the bedroom window and I could see blue skies with a few clouds, so knew it wouldn’t last long.

Just about then, there was a loud clap of thunder.  Just one, with that long rumbling sound that went on forever.  Yuma popped out from under his sleeping bag and started shaking.  Wasn’t long before he slinked to the floor and sat in the hallway.  Poor guy.

By the time I got out of bed and threw on a jacket, the rain stopped and the sun was popping out.  Barely got the gravel damp, so no mud to worry about.  We went for a walk and our day started.

Have important stuff to do.  The other day, when I was in the Cabeza Prieta National Wildlife Refuge headquarters, I ran into one of the employees, and he saw that I was carrying, so he mentioned that there was a beginners photo class Saturday morning at 10 a.m.  I had nothing planned for Saturday, so decided I would attend.

It turned out to be a partly cloudy morning, with more dark clouds than usual; but still a nice day.  I left Yuma in the RV and headed to the headquarters thinking I would be the only attendee.  I was wrong.  There must have been 15 to 20 people in the class.  Old and young alike.  Many lived in Ajo, but about half were like me; just passin’ through.

We walked around the desert path they have just outside the building taking pictures and she would give us pointers on how to view our shots and simple beginner’s stuff.  Here are a few of my great shots.

These two guys were hanging on the wall in our classroom. 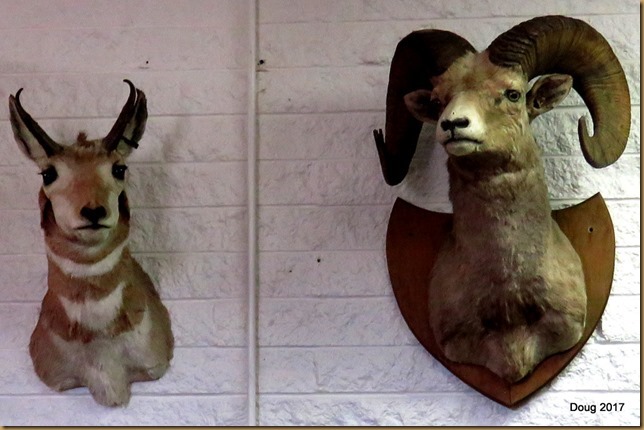 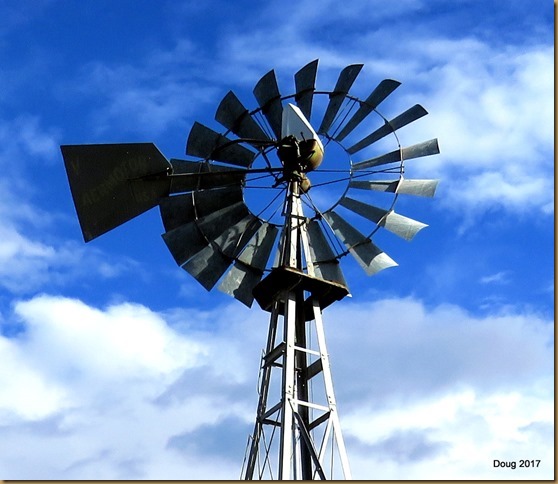 Class following the instructor along the path.

You can see there are quite a few clouds today. 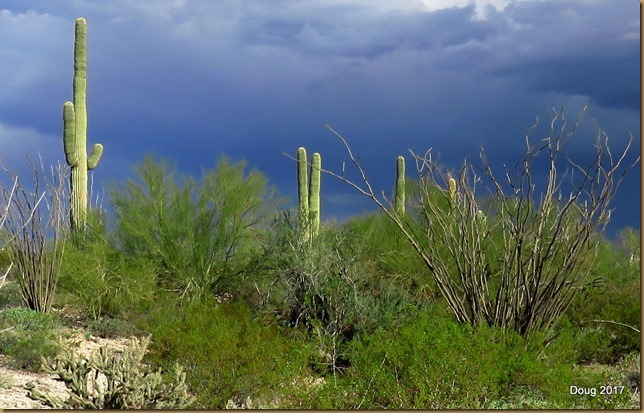 At other times just floating clouds. 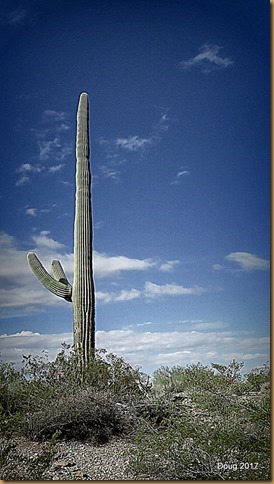 There’s Katy in the center giving one of the students some pointers. 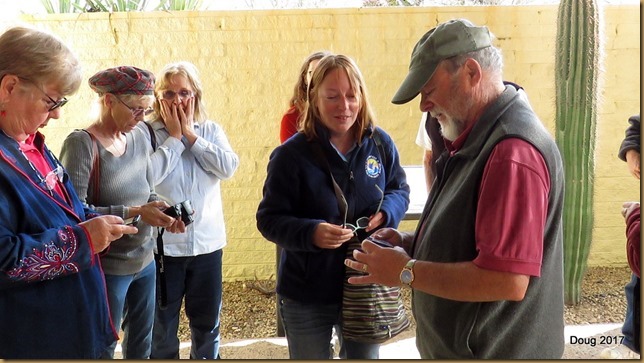 The young lady, Katy, is a professional photographer and teaches classes at the school in Ajo.  Many of the students had no camera or their cell phone for a camera.  A few of us had point and shoots.  I don’t think anyone had an elaborate camera setup.  The hour class ran almost two hours and everyone had fun.  Learned a little, but mostly enjoyed talking with my classmates.

At the end of the class, Katy mentioned there would be a cookout at the top of Tillotson Peak, North of Ajo starting at 4 p.m. and any of us interested could meet at the headquarters and follow them to the top.

I again left poor Yuma at home and went back to the headquarters to meet with those going to the peak.  There must have been a caravan of 15 vehicles heading the five miles North on hwy 85 to the turn-off to the top.

Here we are getting ready to head for the mountains.

Luckily, the road is in fairly good condition with switch-backs to the the top.  Here we ae heading toward the top of the mountain.

About two miles before reaching the top, Katy unlocked a gate allowing us to drive to the very top.  Normally, visitors must park at the gate area and walk the rest of the way to the top.  So glad we didn’t have to do that.

We got to the top just as the sun was setting.   We’re hoping the clouds break enough for a fiery sunset.

There were towers to the North and South at our same level.  The elevation is 2,350 feet.  We are overlooking everything around us to the East and West.

Looking to the Southwest with rays of light coming through the clouds over the Growler Mountain range. 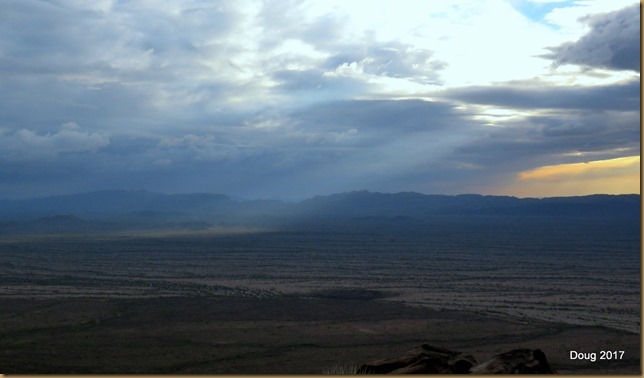 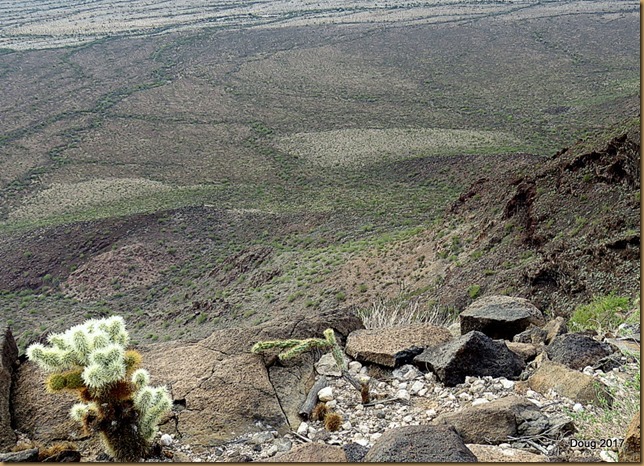 Looking to the South, there are military towers on a knoll level with us. 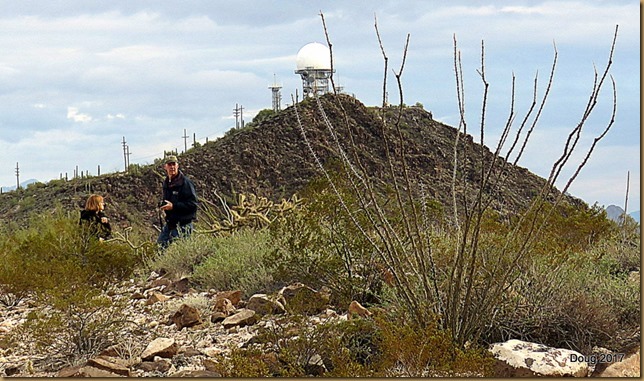 Ran over to the East side of the mountain to get a shot of the Ajo Valley and the Ajo Mountains across the way.  No Moon tonight will get through those clouds, unfortunately. 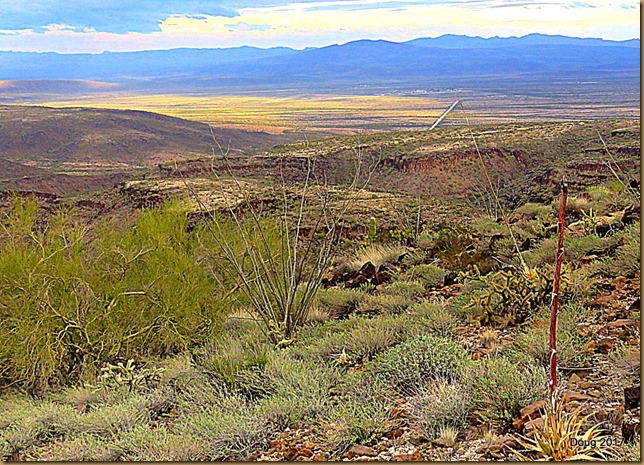 Almost stepped on this little guy. 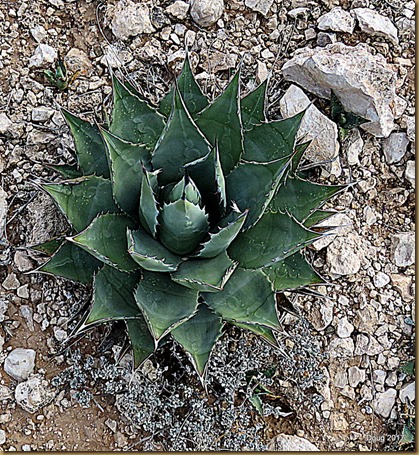 Looking to the Southeast, I just got a shot as darkness is falling on the town of Ajo.  You can see the large pit in the center-left and Ajo Peak on the edge of town with Black Mountain off to the right, where I am camped.  The Ajo Mountain range is in the background.

That squiggly white line between me and the town is the dirt road we traveled to get here.

There was just enough sun coming through the clouds to the West to make for some great sunset shots.

The sun is just starting to come out of the clouds, throwing rays onto the Growler Mountain range. 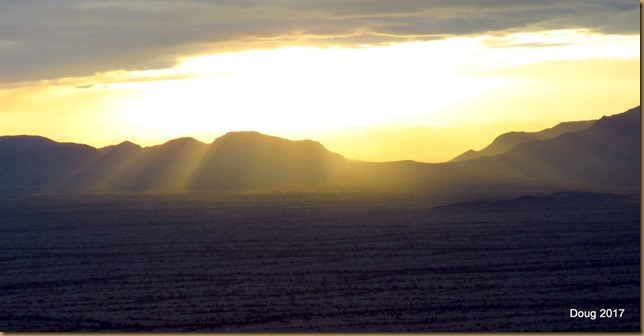 Starting to turn red, then orange, then fades away to a pastel pink. 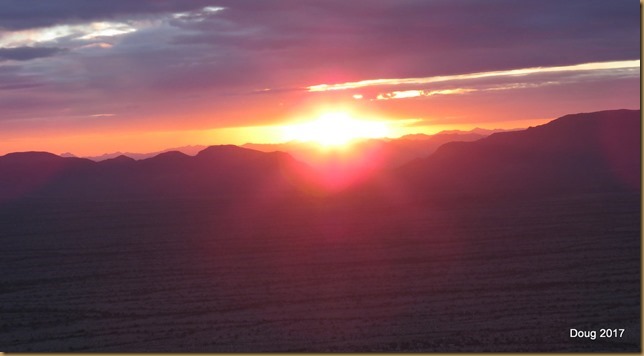 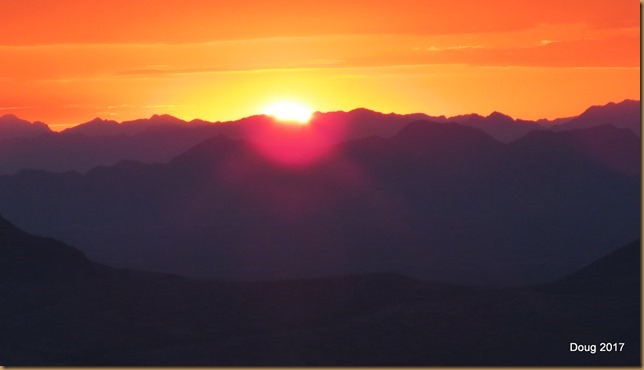 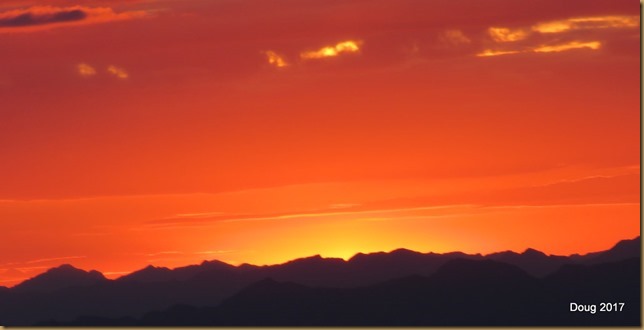 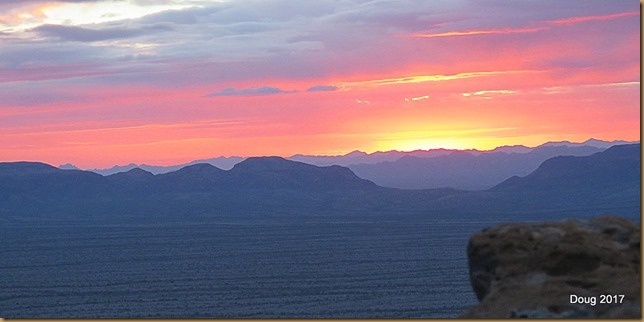 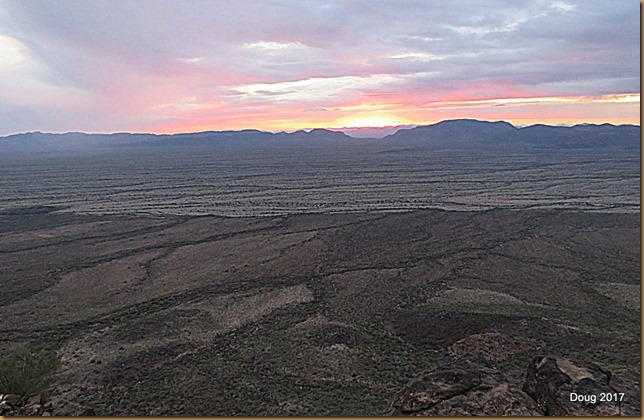 Time to get down the mountain and call it a day.

As we took photos and talked, we ate brats and hotdogs on the grill.  I had a great time meeting the different folks and showing each other the photos we took.  Nothing wrong with cell phone pictures.  They did great too.

It was so nice of Katy to volunteer her time to  give this class.  She has classes every second Saturday of the month and they are free.  She gives different classes for different experience levels.  Luckily, I hit a beginner’s level.  During the week day, she teaches photography classes at the Ajo High School.

The day was different for me.  For once, I was able to talk to real people instead of to Yuma.  I had a great time.  Yuma, not so much.