Had an emergency dead battery problem last night.  The battery for my laptop mouse went dead!  It was horrible.  Trying to edit my pictures and writing my post without a mouse was excruciatingly slow and difficult.  I am so glad I didn’t have a large one to do.

This morning, I knew I had to go into Tonopah in search of some AA batteries.  if I have too, I’ll drive all the way to Buckeye for one.  All 30 miles.  Never again will I do a post without a mouse!

This morning started out partly cloudy with a cool breeze.  I had breakfast and drank some coffee waiting for it to warm up.  But, there were enough puffy clouds covering the sun that it stayed cool all day.

The other day, I purchased an online mapping app for $12 named US TOPO MAPS.  With it I can see the terrain and pinpoint the mountains around me.  Maybe I’ll be a little more accurate in the future with the names of the mountains I see.  Sadly, many times I have named them wrong.

As in these two mountains.  I called them by the wrong name a few days ago.  The one on the left is Big Horn Peak and the one on the right is Burnt Mountain.  They are both in the Big Horn Mountain Wilderness area north of me.

Way off to the northeast closer to Phoenix are the Belmont Mountains.  If not, it is still a neat photo.

Did this most of the morning waiting for the cool breeze to die down, but it didn’t.   Cannot beat this scenery! 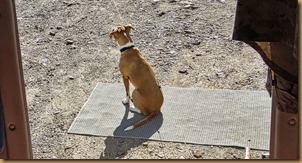 There’s my faithful guy watching and guarding our home.

Around noon, I gave up on having a warm day, so Yuma and I piled into the Jeep and headed into Tonopah.  Just in case they had a laundromat I took my basket of clothes.  And of course my one bag of trash.  Always got to be on the lookout for a free trash bin in these parts.

We went the 11 miles to Tonopah and found there is no town.  Just three service stations and an eating place.  Here is an old motel.  I thought the office was a neat looking building, but the string of motel rooms were run down.  No one seemed to be staying there, but it was open for business.

They do have a post office though.  These small towns seem to always have nice, well kept post offices. 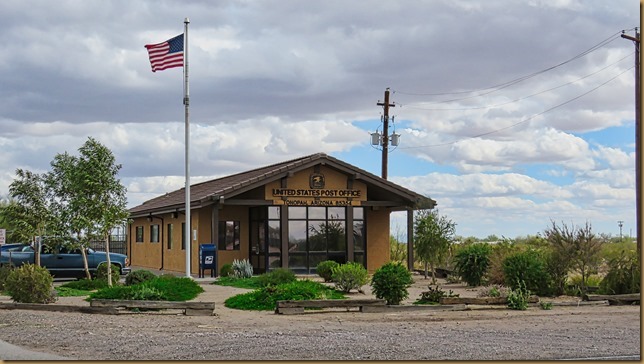 I stopped in the Shell service station and was going to buy gas.  The sign said $2.49 but the fine print said “for cash customers”.    $2.59 for credit card.  Upset me they were sneaky like that so I left my bag of trash in their trash can and parked at the door to see if they had batteries.  No gas.  Will have to wait till I get to Buckeye on Monday.

Luckily, the service station thrift store had batteries.  For $7.37 I now have four Duracell AA batteries.  Enough for a lifetime if I don’t lose them.  I think they’re made of gold based on the price.  But had to have them.  Gas I can do without, but not those precious little batteries.

As I was driving to Tonopah, I saw a sign saying “RV Dump” along side of the road at the entrance to Saddle Vista Ranch, so on the way home I stopped in to see how much.

The owner, Dave was busy selling chickens to a customer so we waited and walked around taking pictures of stuff. He has chickens, turkeys and peacocks for sale. When he finished, I asked how much to dump.  He said $10 for dump and $5 for water.  Too much, but since I didn’t have my RV with me I said nothing.

We chatted a little and he said he had two RV sites and along with it a clothes washer and dryer for them and paying customers to use.  Asked how much.  $3 for wash and dry.  I had my clothes with me and for $3 and no one around to bother me, it was a deal!. Just one washer and one dryer in a half finished building, but having no competition I was sold.

Not quite the finished look but Dave is working on it.  He owns and does all the work trying to keep his ranch.  Times are hard and he can’t afford a handyman.  He was telling me his wife left him last year because of their tight money situation and other reasons I’m sure.  Dave wasn’t wanting to quit the ranch, but she had enough and moved into town with the kids. 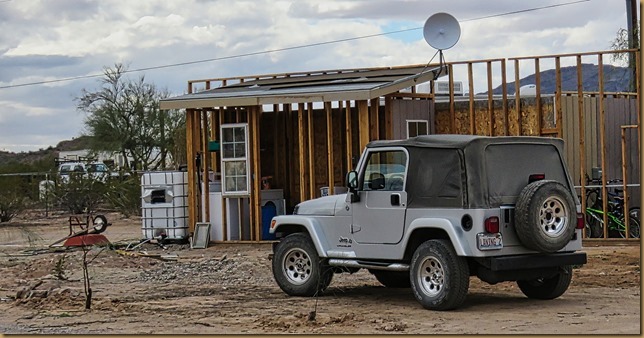 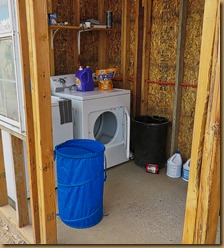 Got clothes washed and dried and we were home by 3 o’clock.  While waiting for the clothes to dry, we had a few rain drops.  Not much.  When we got home it was chilly in the MH so turned on the Wave 6 and had some lunch.

Rested awhile and then it was time to set-up my Dish for tonight’s Gold Rush.  Being right up against the mountain face I was worried it would block my access to the satellites, but it didn’t.

The mountain is just a little southeast of my position so had a perfect view of the south.  Hit the sweet spot and within ten minutes, I had the TV up and running with plenty of time to spare.

Now to finish my blog, eat dinner and watch Gold Rush.  It doesn’t get any better than this!