It’s definite now.  I am slowly heading east towards home.  It was only 80 miles today but I always feel melancholy for a few days as I start heading toward Illinois.   We left Dome Rock around noon and arrived at our site around 2 o’clock.

I know it will be awhile before I get there.  Dolly texted me telling me they were having a wet snow and it was damp and windy.  Nothing like the low seventies here.  However, there is a high wispy cloud cover and it is hazy today, so not good for pictures.

You can see why this is called Saddle Mountain.

As I came in from the west on Salome Road, there was an old building.  Looked like it had once been a service station many years ago before I-10 and this was the main road around here.  Time and local kids have done their damage. 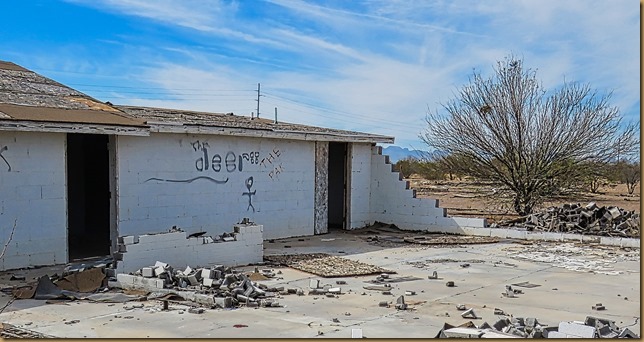 Saw this large hawk fly by and land on the telephone pole ahead of me. 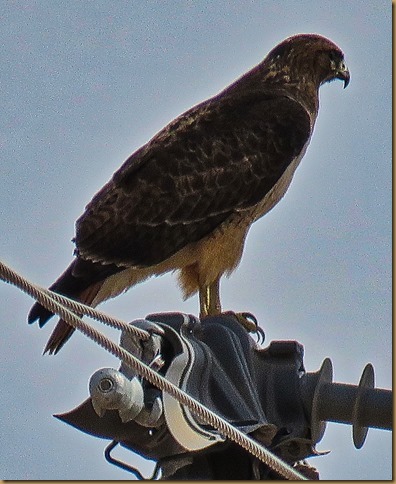 I drove into one of the roads leading into the BLM on the north side of Saddle Mountain.  Never been on this one before and assumed it would connect to other roads.  When I say road, it is more like a jeep trail.  Very narrow, twisting and rocky.

It was crowded.  More crowded than the previous two times I’ve been here.  I hope it is just a weekend crowd.  We’ll see.  Anyway, I kept creeping along going up towards the base of the mountain and every pull off was occupied.  Kept creeping and no other roads came along.  I couldn’t turn around and you know me.  I’m not going to stop and unhook the Jeep unless it is the last alternative.

I finally got to within 200 feet of the base of the mountain.  Only pick-ups and light trailers left.  After I passed them I ran out of road.  Luckily, I was a few hundred feet from the last site, so I stopped and got out.  Walked around a little and found a place to pull off the road.  Had to throw a bunch of rocks and boulders out of the way to do this, but got it done.

I’m now the closest RV to the mountains.  Didn’t plan it!  It just happened.  Don’t know how I’ll get turned around to go back down, but I’ll worry about that when the time comes.  You can see the road I was driving on. 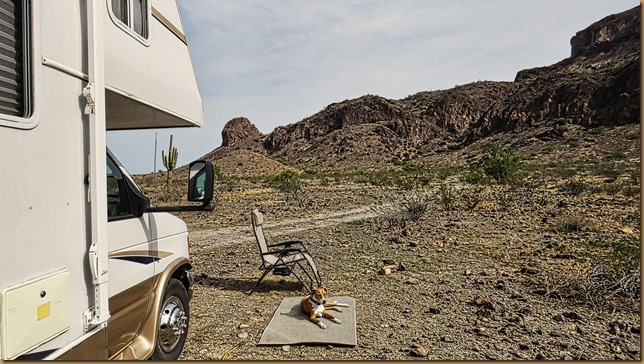 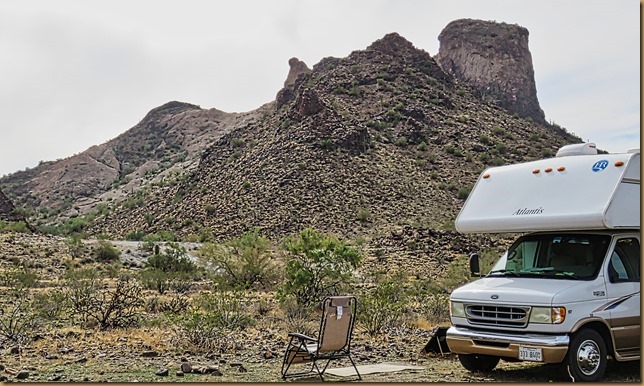 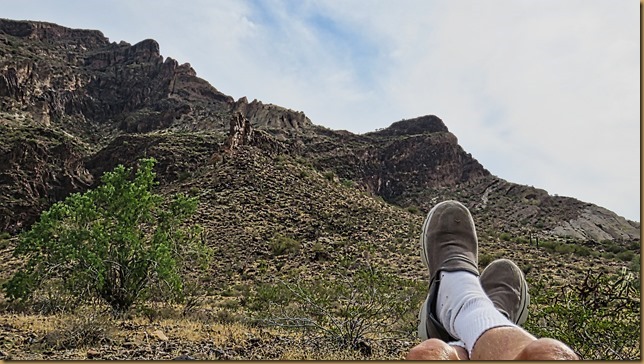 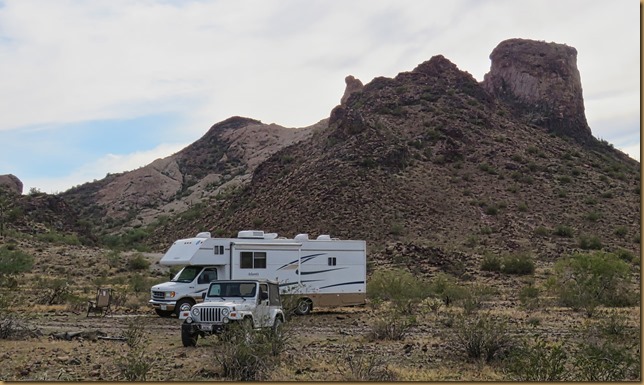 After lunch, Yuma and I took a little hike up the mountainside for a little exercise.  Wasn’t long before we were up pretty high. 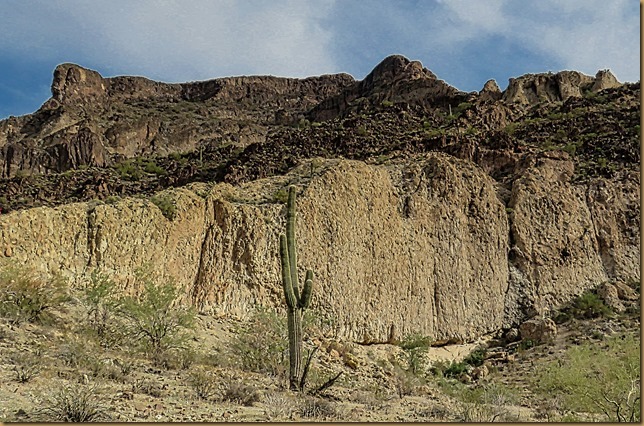 Looking to the north towards I-10. 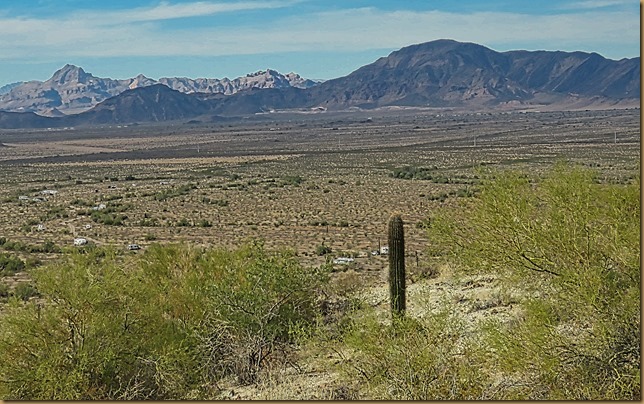 I’m almost level with that helicopter flying through the valley.  You can see I-10 off in the distance to the north.

As it got later, the skies cleared.

Yuma took a selfie of the two of us with the Saddle Mountain in the near distance.  You can tell it is not far to the base of the mountain from where we are. 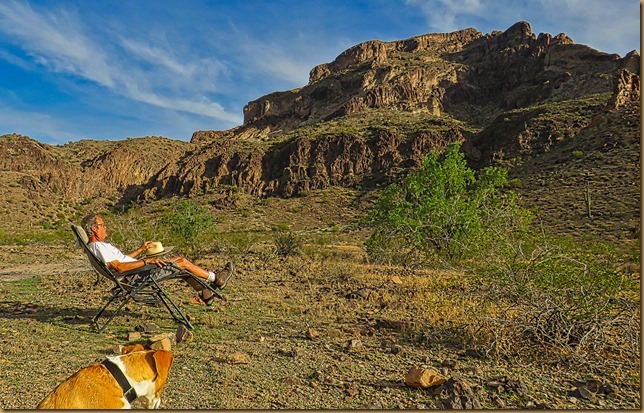 Nice sunset off to the west. 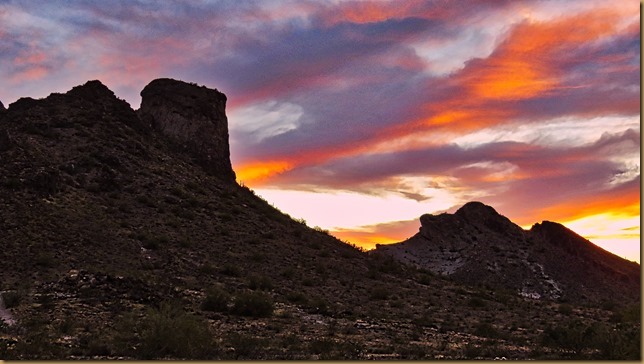 Looking forward to a little jeepin’ and hikin’ in this beautiful mountain.  Nice enjoyable day and now time for a relaxing evening.