Drive down to the Clark Dry Lake and Eagles Fly!

This morning, I had a little technical scare.  I sent a text to my wife telling her I was up and moving.  That way she doesn’t worry I died in my sleep.  About an hour later while cleaning up after breakfast, I glanced down and saw the text had not been sent.  Then I noticed my phone said no cell service!

First I cussed out the cell tower watchman in Borrego Springs because they shut down service on Sundays or overslept.  Then I decided to drive into town to see if my cell service would return.  I got half way into town when it dawned on me that it may be my phone.  I rebooted the phone and sure enough I had cell service.  My fault!  Not the Verizon tower watchman in Borrego Springs.

Since we were already in the Jeep, Yuma and I decided to take a drive down to the dry lake for some photos and take a look around.  It was already getting hot.  Rockhouse Trail is a rough road.  And it only gets rougher the further you drive.

Coyote Mountain is to my west as I go north on the Trail.

Not too sore from climbing yesterday.  Think I'm getting into a little better shape.

It isn't long before we get to the dry lake bed.  They only allow vehicles on the very west side and you must follow the road and not go out and damage the lake bottom.

This is what the lake looks like close up.  Kinda like you think it would.  Dried up and cracked mud. 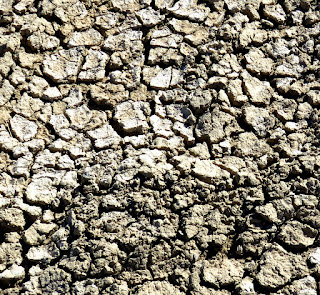 Couldn’t go far down the Trail.  Today is Superbowl day and I need to be prepared for it.  This Trail goes for miles into Coyote Canyon and then peters out.  I have driven back there before and not interested in doing that rough road again.

Those Santa Rosa Mountains on the north side of the lake are beautiful.  Never get tired of looking at them. Passed the dry lake now and heading into Coyote Canyon.   The north end of Coyote Mountain ends right here.   I had heard there was a trail leading up to the top of the highest peak at this end of the mountain.  Maybe that is it going around that hill of gravel rock.  Might have to come back and check it out.  Looks like a lot of loose rock, that's for sure. 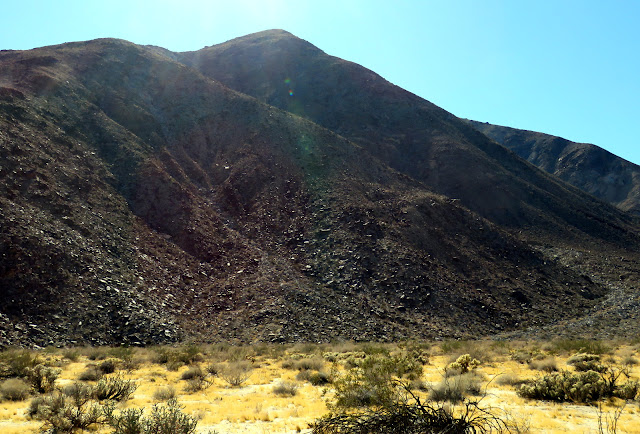 Drove just a little further because it is always hard for me to stop and go back.  But all I see is more sandy road going way back into the canyon. 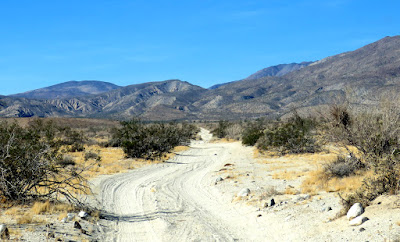 Looking back towards the dry lake.  There's the north end of Coyote Mountain on the right and the Santa Rosa Mountains on the left.

To the north of me, the Santa Rosa Mountains continue along unrelenting with that steel grey color. 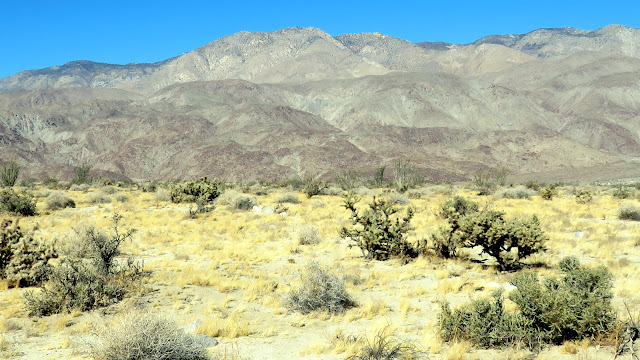 Soon I turn back and head home for the Superbowl game.

As my family knows and many who follow my blog know, I have the Philadelphia Eagles to win the Superbowl against my son-in-law Evan who has the many time champions, New England Patriots.  The Eagles are certainly the underdog to win today

Glad I did stay home with Yuma.  It was so hot in the MH I had to turn on the generator and run the AC to keep us comfortable.  And here we are looking comfortable watching the game. 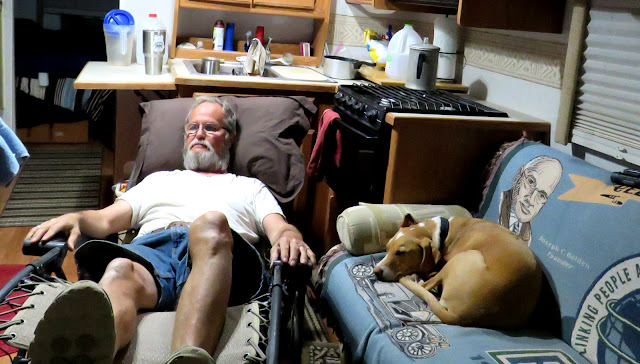 My team won and I'm tired from all the work I did to make it happen.  It's late and time for bed.