This morning I awoke at 6:30 and got up close to 7 o'clock.  Yuma and I took a little walk around the area and came back in.  Thought I would just lay down and rest.  Before I knew it, it was 8:30 and Yuma was barking at me to get out of bed.

Went through the same routine, but this time I made us breakfast and enjoyed the morning's warm temperatures.   Same today as yesterday.  Getting monotonous. :))

Before I leave, there is a huge elastic tube that stretches from up in the engine area of the WL and down into a big container that has fallen down and is nearly touching the ground.  That's all I know about it.  Today, I decided to push it back up into place and tie it up there with rope.  That seems to have done the job.

The remainder of the day, Yuma and I relaxed on the patio and took occasional walks.

Now to the Ghost town and cemetery.  After leaving the mansion for sale, we followed Harshaw Avenue on out of Patagonia to the southeast.  The sign said 7 miles.   A few miles out of town, we stopped at the Arizona Trailhead.  The informational sign said it was 16 miles through the mountains to the next getting off place.  Little too far for me to even consider. 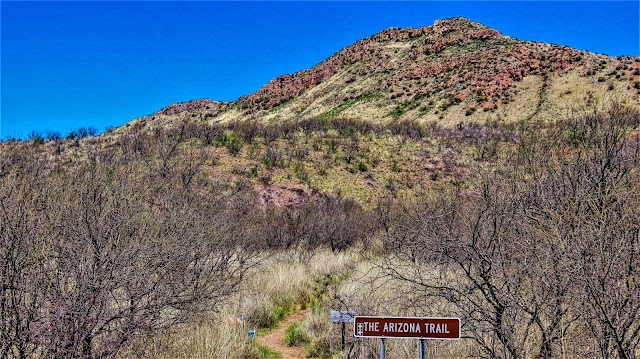 I don't know what it is about this area but it gives me the creeps.  Reminds me of the Hatfields and McCoys.  The folks in the ranches and homes along this road don't seem to be friendly towards strangers.  That's just my feeling.  Probably theses people are very nice if I were to meet them.

The road heading towards Harshaw goes in and out of the Coronado National Forest which is government land.  Then there are places where homesteaders live that is private land.  Probably owned their land before the government came in.  The landowners put up signs letting you know the land is private property and to not stop and keep on driving through.  Not very inviting anyway! 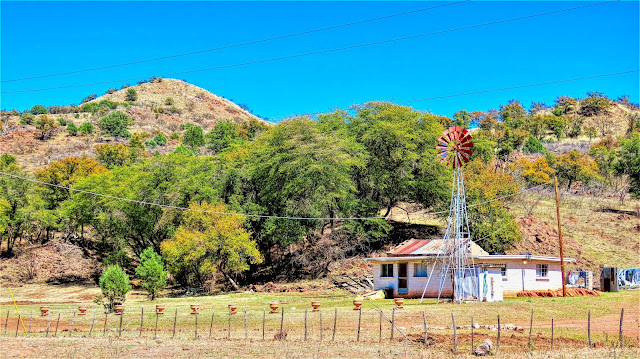 The views are rugged and beautiful and the road is easy to travel. 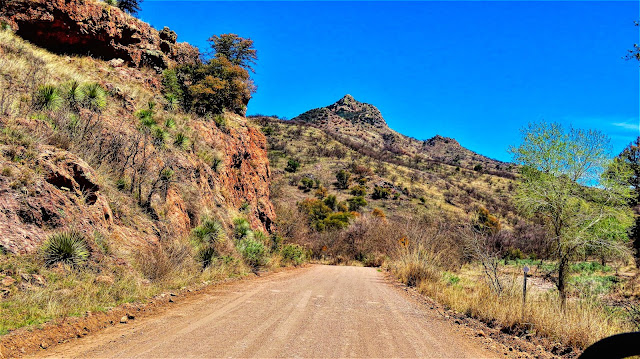 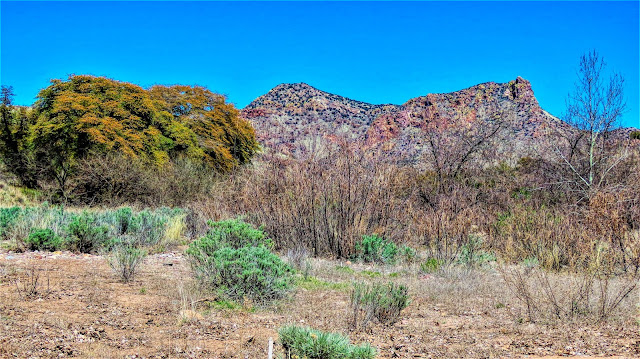 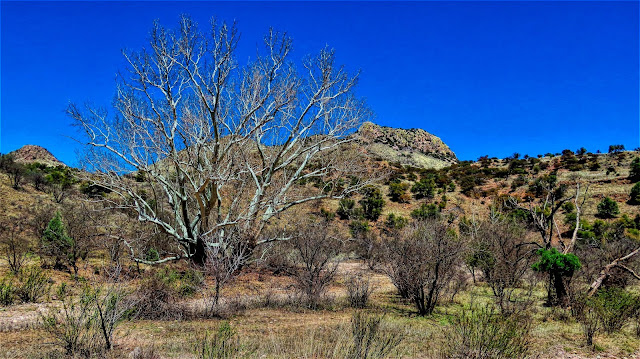 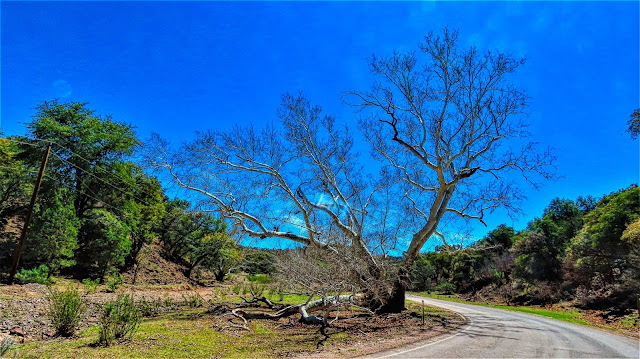 About five miles along the road split and there was a sign with most arrows pointing straight as the road curved to the right.  I didn't have time to read them so I shot off straight.  Needless to say, after about five more miles, I was on the wrong road.  Actually, I was in the middle of nowhere. 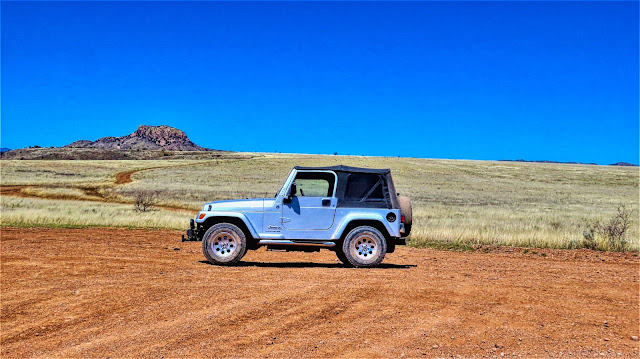 So, I back tracked about five miles and sure enough I saw a sign saying Harshaw two miles.  I turned left and soon I was there.  It was just off the roadway. 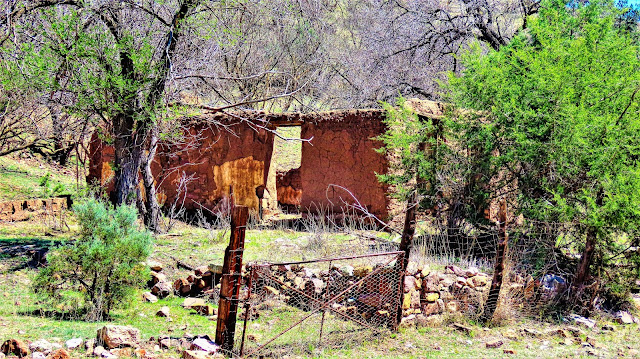 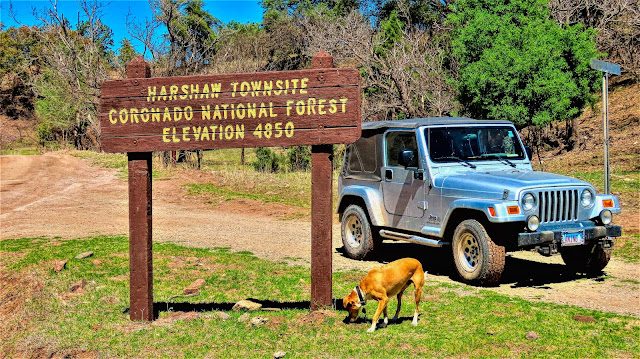 I am sorry to say, that's it.  One building and a Government sign.  I went up the road very quietly and there was a house similar to the one for sale in Patagonia.  There were old cars and signs people were living there.  Not sure if it was a Hatfield or a McCoy, but I know both carry rifles, so I backed up and quickly exited the property.  Here is a link from an article in the Tucson's Arizona Daily Star.

The cemetery is on the other side of the road across a little creek and is accessible.  But, as I walked up to the gate, I heard a dog's low growl and saw two men up on the hillside.  They kind of disappeared around the hill.  I'm already nervous and sure didn't want Yuma going up there so my pictures are all from outside the gate.  What a chicken I am! 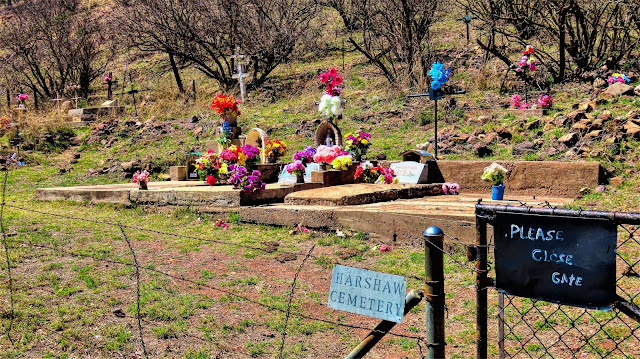 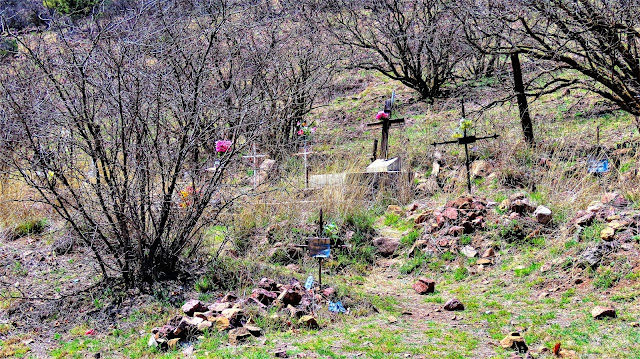 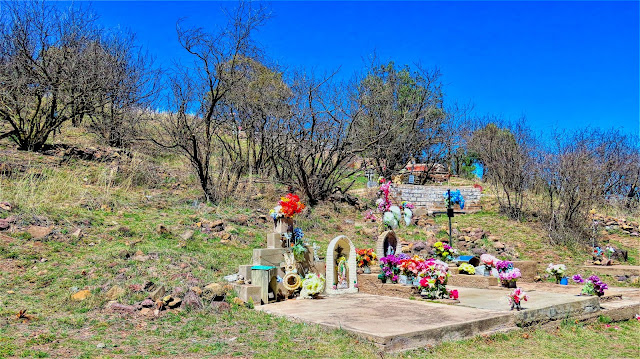 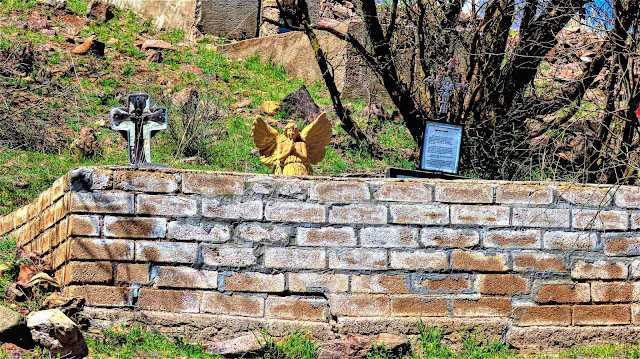 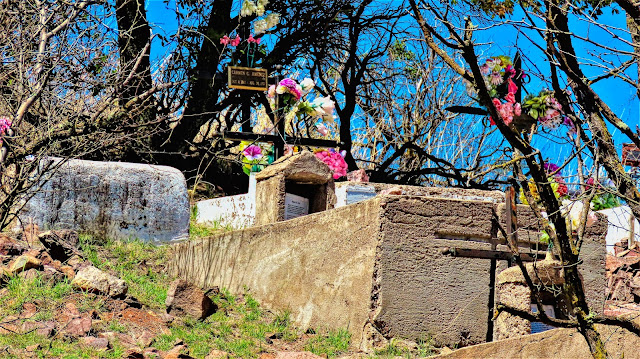 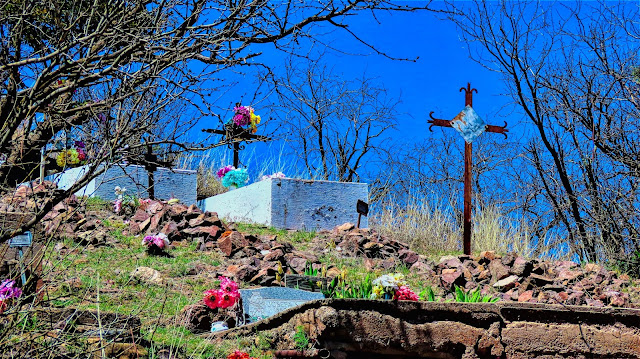 A view of the rugged mountains as I made my way back to Patagonia.  There is a winding road going all the way to the top of that mountain.  If I were with another Jeep, I may have tried driving up there :)) 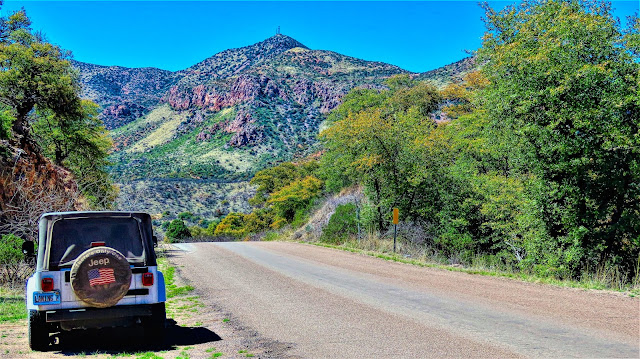 I stopped at the Patagonia Market and picked up a 1.7 lb sirloin steak.  It will last me three nights it is so big.  Got another Sonoita, Arizona sign as I was coming into town on hwy 82. 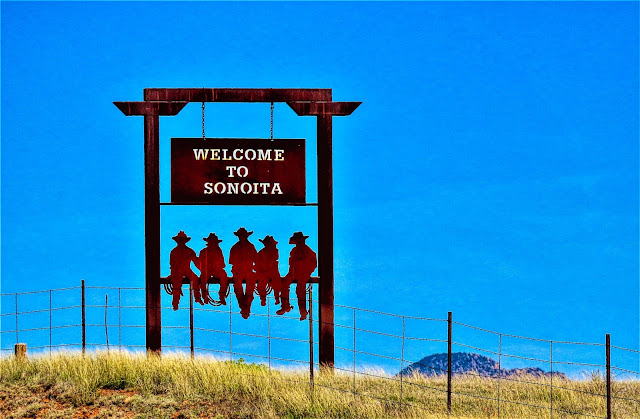 Now for the answer to the big question!  What is the asking sales price of this beautiful old original home in Patagonia, Arizona?  This vintage territorial home with 982 sq ft 2 bedrooms and one bath was built in 1905.

Now, I'm taking this answer from a brochure that was hanging on the fence in front of the house.  Also, I didn't say you couldn't look it up on the internet if it is out there, so that would be no foul.  Without further adieu, the asking price on that brochure is only $229,000.

There is a tie.  Two commenters picked the exact asking price!  One commenter picked $228,900 and another picked $230,000.  I was surprised by the turn-out and really surprised that two hit it on the nose.

Doug and Larry Clark.  It is so odd that a commenter named Doug was the first commenter and picked the price.  Larry thought Doug was me so he picked that number.  How could something like this be so ironic.  I promise you, Doug is not me and we weren't in cahoots to win this valuable prize.

I thank all of you for your comments.  It was fun for me and hopefully with such a shocking end result, you too, enjoyed this diversion from our world problems.

Maybe one day we will learn the true identity of "Doug" and how he managed to pick the exact asking price.:))

See you later.
Posted by Doug Laning at 8:40 PM